Nicola Sturgeon tore into Boris Johnson’s chaotic new lockdown plans today, insisting that they would not be used in Scotland.

The First Minister said she would ignore the Prime Minister’s ‘vague’ new ‘Stay Alert, Control the Virus, Save Lives’ slogan in favour of the previous ‘Stay Home’ message.

It was the latest sign that Mr Johnson’s attempt to keep the four nations of the United Kingdom in sync over coronavirus was in danger of breaking down.

Last night Ms Sturgeon’s Welsh counterpart Mark Drakeford said the ‘stay at home’ message had not changed in Wales either.

Speaking to Sky News today Mrs Sturgeon denied a rift within the UK, saying she was speaking from a legal rather than political position.

‘The Prime Minister last night, apart from things like border control, was talking about lifting restrictions in England. I have to make judgements about what is right for Scotland,’ she said.

‘I, at this stage, think it would be too risky to ease restrictions because the virus, while we have made progress against it, is not sufficiently under control yet.

‘That progress we have made is fragile and I think it is really important to err on the side of caution.’

The First Minister said she would ignore the Prime Minister’s much-criticised new ‘Stay Alert, Control the Virus, Save Lives’ slogan in favour of the previous ‘Stay Home’ message. 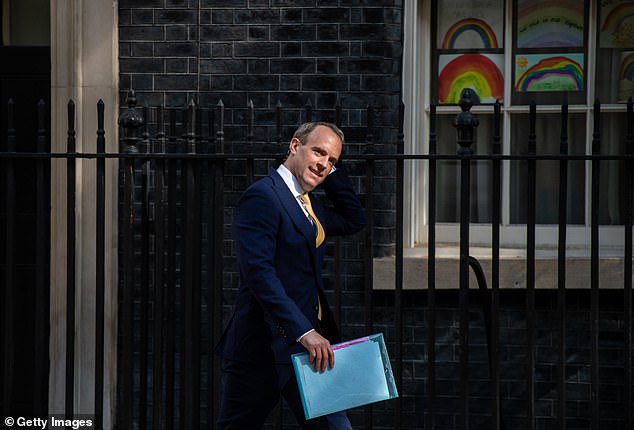 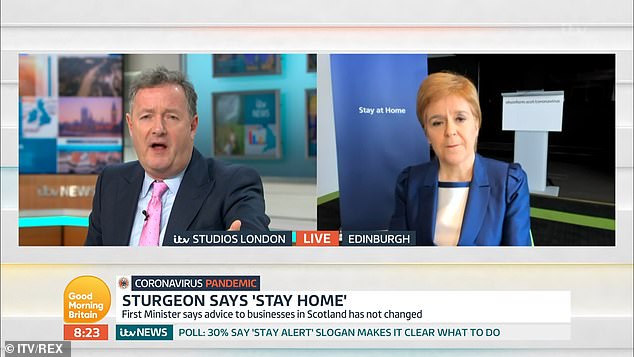 Grilled by Piers Morgan on Good Morning Britain, Mrs Sturgeon countered suggestions by Foreign Secretary Dominic Raab that people would be allowed to see their parents living elsewhere as long as they stayed two metres apart.

‘The advice is stay at home, stay away from people in households other than your own.’

She added: ‘He’s taken decisions that he thinks are right for England.

‘He’s the Prime Minister of the UK, but in terms of easing the lockdown restrictions or changing the message, that is for England.’

It came as Mr Raab was accused of ‘going rogue’ after a disastrous Monday morning media round where he contradicted Boris Johnson’s lockdown speech where the Prime Minister said millions of people should head back to work from this morning.

The Foreign Secretary has created an ocean of confusion after he insisted the government is not urging workers to return until Wednesday – when most were already on their way by road or public transport.

Mr Raab also said that people can meet two relatives such as parents in parks while maintaining social distancing – when Downing Street was briefing last night that it was only one and Mr Johnson failed to mention family or friends in his speech to the nation at all. He also got in a muddle and suggested that pubs could open as early as June – when the PM said it would be no earlier than July.

Downing Street has already raced to repair some of the damage and clarified that Britons shouldn’t meet both their parents in the park – insisting it should only be one person.

‘The state in Scotland is as such that I think the stay at home message right now is the one we must stick to.

‘My responsibility is to do what I think is right for Scotland. I think every leader, including the Prime Minister, has an obligation to be very clear in the messaging they’re giving.

‘I’ve been very clear. I think ‘stay alert’ is very vague compared to ‘stay at home’, but I’ve said all along the virus doesn’t respect borders.’

Welsh political leaders have also put distance between their own administrations and Mr Johnson.

People will be able to exercise more than once a day and garden centres are set to reopen in Wales from Monday.

But last night Mr Drakeford said: ‘This evening, the Prime Minister has set out the minor changes which are proposed to the lockdown rules in England over the next three weeks.

‘I set out the modest changes to the stay-at-home regulations we are making in Wales on Friday. These will come into force tomorrow afternoon.

‘Here in Wales, we will change the regulations so people can exercise more often and allow garden centres to open, if they can comply with social distancing.

‘Our advice has not changed in Wales.’

He said people should remain at home wherever possible and stay local and alert when working, shopping and exercising.

Mr Drakeford said Mr Johnson’s ‘roadmap for the future’ is at an early stage as it depends on how coronavirus behaves in the coming weeks and months.

He repeated that schools in Wales would not ‘return to normal’ on June 1.