Nicola Sturgeon today claimed it would be a ‘democratic outrage’ if the next Prime Minister decided to block a second referendum on Scottish independence.

The First Minister made the incendiary claim in Edinburgh today as legislation was published that could pave the way for a fresh vote five years after the SNP lost the last one.

But the Referendums (Scotland) Bill contained no details on the key issue of when a referendum could be held or what the question would be as she tries to get Downing Street to give in.

Ms Sturgeon said: ‘It is essential the UK Government recognises that it would be a democratic outrage if it seeks to block such a referendum – indeed, any such stance would, in my view, prove to be utterly unsustainable’.

The SNP leader’s party won the European elections in Scotland and has repeatedly dared Theresa May to stop Scotland voting on it again – and has laid down the same warning to her successor after the Tories’ disaster at the polls.

First Minister Nicola Sturgeon holds up a leaflet featuring Tory rival Ruth Davidson as she published the Referendums (Scotland) Bill, a legislation paving the way for a new referendum on Scottish independence today 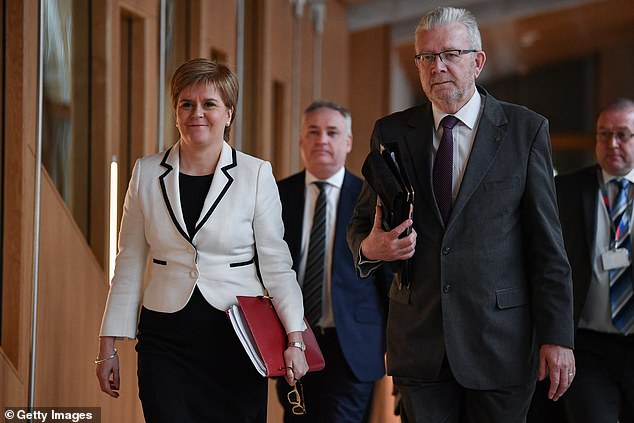 The SNP leader, pictured with Constitutional Relations Secretary Michael Russell, has tared the Tory Government to block IndyRef2 – but has not set a date for when it takes place

All the Tory leadership candidates are expected to oppose IndyRef2, with Sajid Javid linking it with Brexit and said today: ‘Nicola Sturgeon has never met a referendum she hasn’t wanted to overturn’. Rory Stewart also ruled out allowing one.

Can Nicola Sturgeon hold Indyref2 without the Prime Minister’s permission?

First Minister Nicola Sturgeon has said she would not hold a referendum without Westminster’s permission.

She could choose to hold a non-binding vote, however, to pile pressure on the Government.

The SNP may try to launch a legal battle – but that is unlikely to succeed.

But a new Labour Government – especially one that requires a coalition to form a majority – could  help deliver the Section 30 Ms Sturgeon needs.

Scots voted against independence 55 per cent to 45 per cent in a 2014 referendum billed as a once-in-generation poll, but the SNP say that Brexit has forced them to tear-up up their pledge and try again.

Theresa May has repeatedly refused to sign a ‘section 30 order’ – needed by the Holyrood parliament to call a legally binding referendum.

But Mrs May has now quit and it has been claimed that Ms Sturgeon could do a deal with Jeremy Corbyn and Labour to get them into power if it secures a second referendum on Scottish independence.

The First Minister spoke out today as the Referendums (Scotland) Bill was published, setting out the rules and regulations for any future vote.

The Scottish Government proposes that these will be set using secondary legislation, if and when the UK Government grants Holyrood the power to hold another ballot.

But Theresa May has repeatedly refused to grant a Section 30 order for this, declaring ‘now is not the time’ for a second independence vote, and it seems unlikely her successor will change that stance.

Ms Sturgeon, who has already earmarked the second half of 2020 as a possible time for the referendum, said the Scottish Government would ‘seek agreement to a transfer of power at an appropriate point to enable an independence referendum that is beyond challenge to be held later in this parliament’.

The publication of the Bill comes in the wake of the European elections – where Ms Sturgeon’s ruling SNP increased its share of the vote and won three of the six spots for Scottish MEPs. 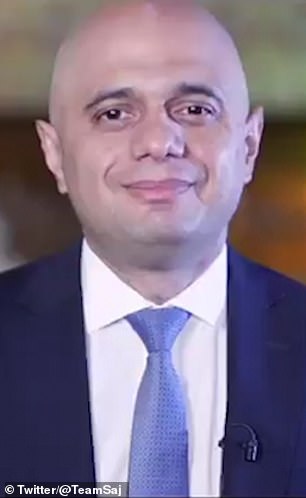 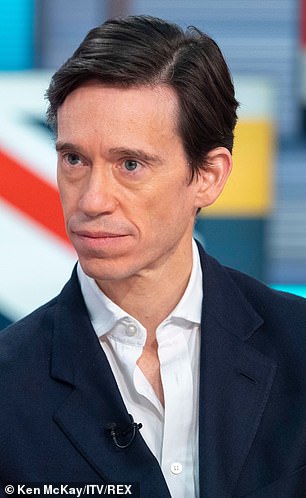 That contrasts with the success of Nigel Farage’s newly formed Brexit Party south of the border.

Ms Sturgeon has already told how those elections, coming in the wake of Scots voting to remain in the European Union in 2016, have shown a ‘tale of two countries’ within the UK – with Scotland ‘diverging markedly in our outlook, ambition and vision for the future’.

And she stressed: ‘Now, more than ever, it is essential that we keep Scotland’s options open so that people have the opportunity to choose a better future.’

The First Minister stated: ‘An independence referendum within this parliamentary term will give Scotland the opportunity to choose to be an independent European nation – rather than have a Brexit future imposed upon us.

‘Throughout the Brexit process, Scotland has been treated with contempt by Westminster, and our efforts to find compromise and protect the interests of the people of Scotland, who voted overwhelmingly to remain in the EU, have been ignored.’ 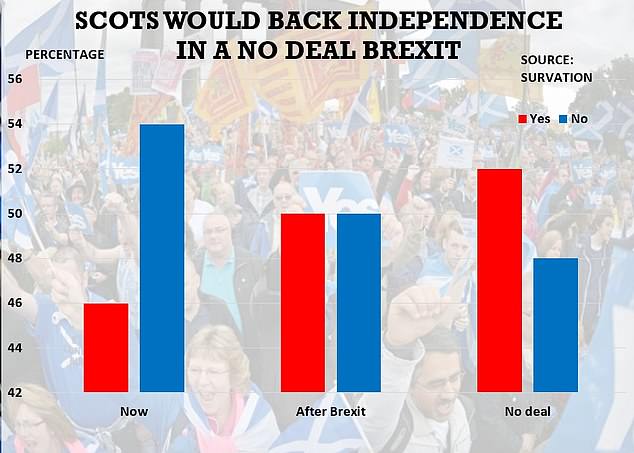 Recent polling found that Scots would vote for independence if the UK crashes out of the EU with no Brexit deal, but they would back to stay in the UK if a vote was held in other circumstances

The Bill – which has 42 separate sections – provides a ‘legal framework for the holding of referendums on matters that are within the competence of the Scottish Parliament’, accompanying papers said.

Scots would back independence if there is a No Deal Brexit – but is unlikely otherwise, polling says

Scots would vote for independence if the UK crashes out of the EU with no Brexit deal, recent polling has said – but is unlikely in other circumstances.

Voters would oppose the break up of the United Kingdom if the referendum was held tomorrow, according to a Survation survey from last Autumn.

And if the UK leaves the EU with a deal then the voters are split 50:50 the poll found.

According to the survey, if there is a referendum held now then 54 per cent of Scots would vote ‘No’ and 46 per cent voted ‘Yes’.

But if the Tories do not get a Brexit deal and a vote is held then the result switches, with ‘Yes’ narrowly winning by 52 percent to 48 per cent.

The poll of 1,013 people was carried out between October 3 and 5 last year.

These made clear: ‘The main policy objective of the Bill is to ensure that future referendums on matters that are within the competence of the Scottish Parliament maintain the high standards achieved by the referendum on Scottish independence in 2014.’

They also stipulated that determining what questions are to be asked of voters, Scottish ministers ‘must consult the Electoral Commission’.

While having the UK Government legislate for future referendums would be a ‘alternative approach’, Scottish Government papers stated: ‘This would not be an effective or acceptable option.

‘The Scottish Parliament should set the rules for referendums within its legislative competence, as this is the only legislative approach that respects the rights and role of the Parliament.’

Constitutional Relations Secretary Michael Russell said that ‘although referendums have become an increasingly common feature of UK democracy, it is a long time since the framework governing them was last comprehensively reviewed’.

He added: ‘Introducing a standing framework for referendums is a reasonable thing for any country or Parliament to have and this legislation will put Scotland in the same position as the UK and many other countries.’

However the pro-UK campaign group Scotland in Union said the publication of the Bill was a ‘reckless act by an irresponsible Government’.

Chief executive Pamela Nash, a former Scottish Labour MP, said: ‘With a constitutional crisis over Brexit, the very last thing the country and the economy needs is deeper division and greater uncertainty.

‘Nicola Sturgeon only cares about putting up barriers between people, but it’s time for her to become First Minister for everyone in Scotland and drop this unwanted plan.

‘Only a fifth of voters back her proposal to force a divisive second independence referendum on the country by 2021, and a third of former Yes voters now want to remain in the UK.’