Nicola Sturgeon demands BILLIONS more for the NHS in Scotland

Nicola Sturgeon will today demand billions of pounds in extra funding for the NHS in Scotland as her latest price for supporting a minority Labour government.

The SNP leader has already said Jeremy Corbyn would have to promise to allow a second referendum on Scottish independence next year and to scrap the UK’s Trident nuclear deterrent to get her support.

And this morning she will go even further as she launches her party’s general election manifesto by calling for a massive increase in the NHS budget north of the border.

Ms Sturgeon will urge the next UK government to up health spending nationwide by £136 per person, a total of £35 billion extra.

This would create an extra £4 billion for Scotland’s NHS in Barnett consequentials – the formula used to calculate funding for the devolved administrations – by the end of the parliamentary term.

Nicola Sturgeon, pictured on the campaign trail in South Lanarkshire yesterday, will today demand extra funding for the NHS in Scotland 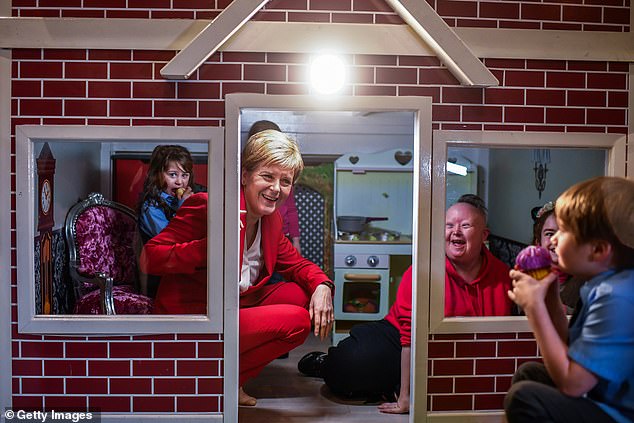 Opinion polls suggest Boris Johnson and the Conservatives are on track to win a majority on December 12.

But some believe the polls could still tighten and Mr Corbyn could squeak over the line with the most MPs but short of an overall majority.

That would make him reliant on the support of other parties to form a government.

Ms Sturgeon has already made clear the SNP would be willing to prop up Mr Corbyn – but only if her party’s demands are met.

The SNP leader is expected to say on NHS funding: ‘The SNP is spending in Scotland £136 per head more on front-line health services than in England.

‘This amounts to over £740 million more spending per year on front-line health services in Scotland compared to the UK.

‘Now, given our rural population, there should always be higher per capita spend in Scotland.

‘However, if the next UK government raised health spending per head to the current Scottish level, closing that gap, it would not only substantially increase health investment in England, but would mean that by 2024-25, front-line investment to NHS Scotland would be more than £4 billion higher than today.

As well as setting out her NHS funding plea, Ms Sturgeon will also use her manifesto launch in Glasgow to attack Boris Johnson’s Brexit plans.

She is expected to say: ‘At the heart of this election is a fundamental question for the people of Scotland – who should decide Scotland’s future – the people who live here or Boris Johnson? The future of our country is on the line.

‘The reality of Westminster control over Scotland is this – a right-wing Tory government Scotland didn’t vote for and a Prime Minister in Boris Johnson who is dangerous and unfit for office.

‘It means Tory cuts to the Scottish budget, the NHS under threat from a Tory-Trump trade deal, a power grab on the Scottish Parliament, children being forced into poverty and a disastrous Brexit deal that will hit jobs, living standards and workers’ rights.

‘But there is worse to come – unless Boris Johnson is stopped this will just be the start. 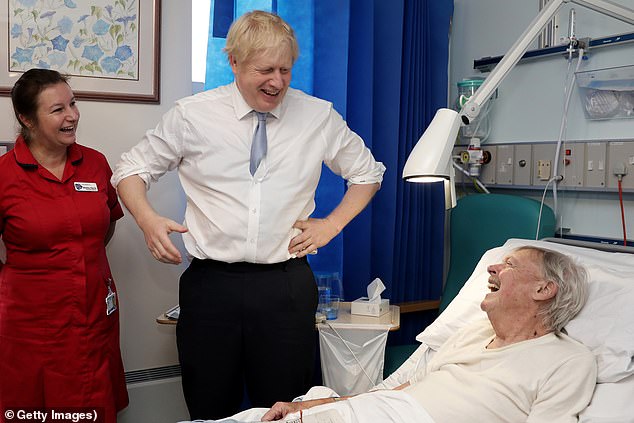 Mr Johnson, pictured visiting a hospital in Cornwall today, is adamant that the Tories will not allow a second referendum on Scottish independence to take place

‘Brexit is nowhere near being done. The Tories have barely got going – they haven’t even started trade talks.’

Ms Sturgeon confirmed earlier this month that she would demand the UK’s Trident nuclear deterrent be scrapped as the price of SNP support for a minority Labour government.

The SNP leader said she had a ‘moral objection to weapons of mass destruction’.

She is also adamant that Mr Corbyn must agree to holding a second independence referendum before the end of next year if he becomes PM.

Mr Corbyn has said he will not agree to a vote in the ‘early years’ of a Labour government, a period of time he defined as at least two years.

But the SNP is confident that Mr Corbyn would give in on the issue and allow the vote to take place if that was the price that had to be paid for him to be PM.

Ms Sturgeon said last week: ‘Jeremy Corbyn supports the right of self-determination for almost every other country in the world.

‘I am not sure he is going to compromise the chance to have a Labour government for that issue.’