Nicola Sturgeon EXTENDS Scotland’s circuit breaker by a week: Leader announces curfew and closure of pubs and restaurants in central belt will last until November 2 after Scotland records highest number of coronavirus deaths since May

Nicola Sturgeon today announced pub and restaurant closures across the central belt will be extended by a week to November 2 after Scotland recorded its highest number of coronavirus deaths since May.

The First Minister imposed the closure of hospitality venues in Covid-19 hotspots as well as a 6pm indoor hospitality curfew in other areas earlier this month.

The rules were originally due to last for two weeks and end on October 26 but Ms Sturgeon said this lunchtime that the measures will have to be kept in place for longer.

She said extending the shutdown to November 2 would allow for a ‘smooth’ transition to a new tiered system of restrictions, scheduled to come into effect on the same date.

The original introduction of the measures prompted hospitality chiefs to warn of a ‘death sentence’ for hundreds of Scottish venues.

Ms Sturgeon made clear she believed the extension of the measures was necessary after Scotland recorded a further 28 Covid-19 deaths and an additional 1,739 cases – the highest number of fatalities since May 21. 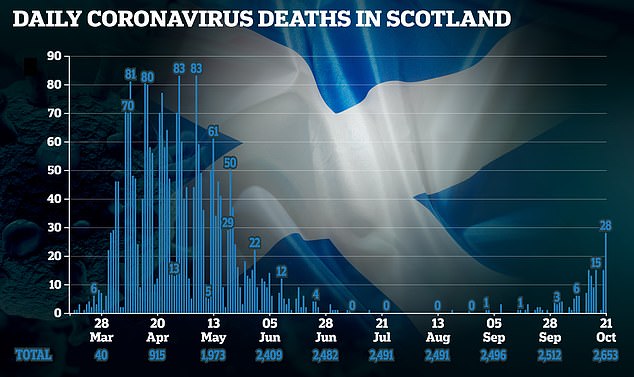 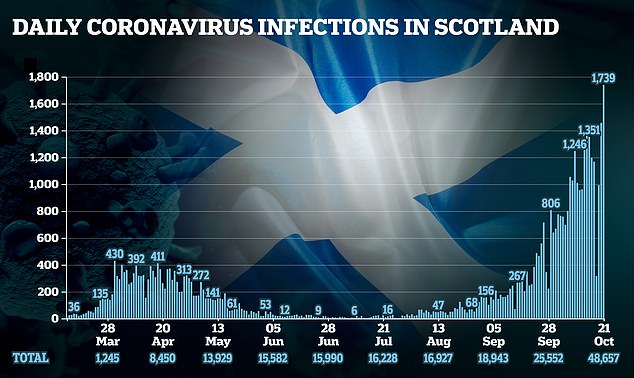 The PM insisted he would honour the £60million package of business support for the region he offered to the Labour mayor, even though it was angrily rejected with Mr Burnham accusing the Government of dooming people to ‘poverty’.

But Mr Johnson said the money would now be ‘distributed to the boroughs’ instead of going through the mayor’s office.

The premier also jibed that he had a ‘great conversation’ with Sheffield City mayor Dan Jarvis, who today agreed a deal for the region to be escalated to Tier Three from Saturday.

South Yorkshire has secured a £41million deal for contact tracing, enforcement and business support, and Mr Jarvis swiped at Mr Burnham by saying he had acted ‘responsibly’ in reaching an agreement.

Alongside a ban on households mixing indoors, pubs and bars will have to shut from midnight on Saturday, as well as betting shops, casinos and soft plays.

However, gyms and leisure centres can stay open – with Liverpool also getting their rules eased after a protest at double standards between regions. Talks with Tees valley and Tyneside have been ‘paused’ because data suggests measures to cut infection rate may be working.

West Yorkshire leaders say they have been told it will not be escalated into Tier Three this week – although Government sources insist discussions are still ongoing.

The latest dramatic move means 7.3million people will be under the top level of restrictions by the weekend.

The sum granted to South Yorks is roughly in line with that handed to Merseyside and Lancashire, adjusting for population size.

Talks with Mr Burnham broke down yesterday after he demanded £65million for Greater Manchester, which would have been proportionally far more than accepted by other areas. He originally asked for £90million.

The hospitality rules banned the sale of alcohol inside pubs and restaurants nationwide and imposed a 6pm curfew on all indoor hospitality premises.

The total closure of hospitality venues applies to five hotspot areas in the central belt – an area which includes Edinburgh and Glasgow and is home to approximately 70 per cent of Scotland’s population.

Ms Sturgeon said restrictions on hospitality north of the border will remain in place for a week longer than previously stated.

The SNP leader said this would allow for a ‘smooth’ transition to a new tiered restriction system which is due to come into effect from November 2 and the details of which will be published on Friday this week.

Restrictions put in place two weeks ago on hospitality businesses were due to end on October 26.

Ms Sturgeon said while there is ‘cautious optimism’ that the measures are working, Scottish ministers were told by advisers that it would not be safe to lift the measures from Monday as had been planned.

The First Minister said: ‘The extension allows us to transition more smoothly to the new levels system that we hope will be introduced on November 2.’

Ms Sturgeon said existing financial support measures for businesses will be extended to cover the additional week of the restrictions being place.

New funding arrangements under the tiered system will then be set out at the end of this week.

Ms Sturgeon said she recognised the extension of the rules is ‘harsh’ as she said: ‘I know all of this is really unwelcome and I know that these restrictions are harsh.

‘They are harsh financially for many individuals and businesses, and they are harsh emotionally for all of us.

‘I want to stress again that none of these decisions are being taken lightly – this is all about trying to save lives and minimise the health damage that we know this virus is capable of doing.’

But the SNP leader added: ‘Even allowing for today’s figures, we think that we might be starting to see a reduction in the rate at which new cases are increasing.’

But it fell in the following days to an average of 1,058 cases on October 18 and 916 on October 19 before a spike yesterday and today.

A restriction against gatherings in people’s homes will also continue until November 2. 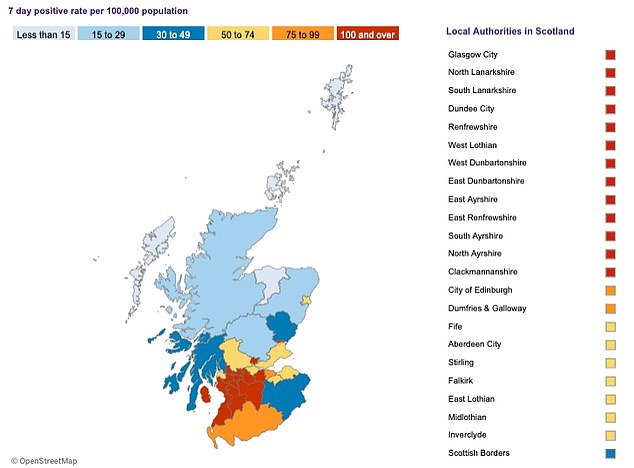 Ms Sturgeon told a briefing in Edinburgh that the coronavirus death toll in Scotland now stands at 2,653.

The figure is lower than the 4,376 deaths given earlier by the National Records of Scotland as they do not include suspected and probable coronavirus infections.

The daily test positivity rate is 9.7 per cent, down from 11.4 per cent on the previous day.

There are 873 people in hospital confirmed to have the virus as of yesterday, up by 49 in 24 hours. Of these patients, 73 are in intensive care, a rise of three.