Nicola Sturgeon hints she WILL back Jeremy Corbyn as ‘unity’ PM

Jeremy Corbyn took a terrifying step closer to power today as Nicola Sturgeon dramatically declared that she could back him as a ‘unity’ PM today.

The SNP leader signalled she is ready to line up behind the hard-Left Labour leader as part of an all-out effort to block No Deal Brexit.

She also broke ranks with other Remainers by suggesting that a confidence vote to oust Boris Johnson should be held before an extension is secured – rather than afterwards.

The move could pave the way for a huge Commons showdown as early as next week – when Mr Johnson is meant to be in Manchester for the Tory conference.

A Downing Street source said the intervention showed Labour had done a deal to ‘sell the UK down the river’ by offering a second Scottish independence in return for being propped up in power.

However, even if the government was defeated in a confidence vote, it is still far from clear Mr Corbyn could secure a majority in the Commons to replace Mr Johnson in No10.

Lib Dem leader Jo Swinson has insisted she would never put the veteran left-winger in charge of the country, and he would also need at least tacit support from the exiled Conservative rebels.

Under the Fixed Term Parliaments Act, when a PM loses a confidence vote there is a two-week period for someone else to win a confidence vote. If that does not happen an immediate election is triggered.

Ms Sturgeon was responding to a message saying the only ‘failsafe’ way of getting a Brexit extension was to install ‘Corbyn or someone else as PM’.

‘Agree with this,’ the Scottish First Minister said. ‘VONC (vote of no confidence), opposition unites around someone for sole purpose of securing an extension, and then immediate General Election.

‘Nothing is risk free but leaving Johnson in post to force through no deal – or even a bad deal – seems like a terrible idea to me.’ 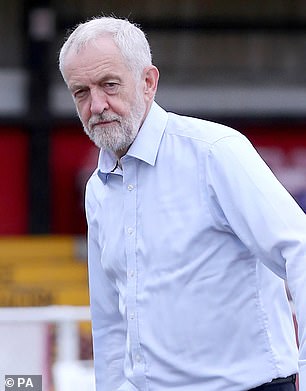 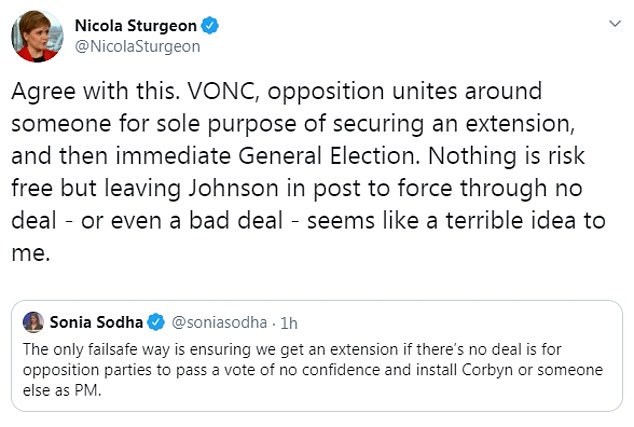 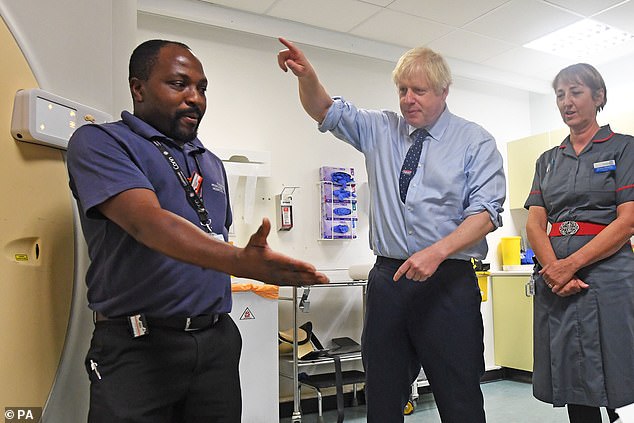 The move could pave the way for a huge Commons showdown as early as next week – when Boris Johnson (pictured at a hospital in Harlow, Essex today) is meant to be in Manchester for the Tory conference

Mr Johnson challenged critics to table a vote of no confidence and face him in an election during stormy Commons clashes earlier this week.

Corbyn still short of majority even with the SNP’s backing

Even with support from the SNP’s 35 MPs, Mr Corbyn would still be well short of the mark of 320 he needs to guarantee a majority in the Commons.

There are currently 247 Labour MPs, and not all of them want to see him as PM.

Despite Ms Swinson’s promise not to support Mr Corbyn with her 18 MPs, some pro-EU MPs have told MailOnline they are worried the Lib Dems are getting ‘itchy feet’ and are eyeing their potential gains from a quicker election.

However, up until now opposition parties have refused to take up the offer – saying they want to wait until the Halloween Brexit deadline has been pushed back.

A Remainer law passed earlier this month obliges Mr Johnson to beg the EU for an extension if an agreement has not been reached by October 19.

There have been fears that a no confidence vote could put Mr Johnson in control of the Brexit timetable, as he would be able to dictate the date for a general election if another PM who can secure a Commons majority does not emerge within a fortnight.

Even with support from the SNP’s 35 MPs, Mr Corbyn would still be well short of the mark of 320 he needs to guarantee a majority in the Commons.

There are currently 247 Labour MPs, and not all of them want to see him as PM.

Despite Ms Swinson’s promise not to support Mr Corbyn with her 18 MPs, some pro-EU MPs have told MailOnline they are worried the Lib Dems are getting ‘itchy feet’ and are eyeing their potential gains from a quicker election.

Labour paved the way for an alliance with the SNP earlier this month when shadow chancellor John McDonnell made clear the party would not block a fresh independence vote.

Today: Brexit Secretary Stephen Barclay and the EU’s Michel Barnier are due to hold talks in Brussels.

September 29-October 2: Tory conference takes place in Manchester, but likely to be hampered by the fact Parliament is sitting.

Mr Johnson is due to give his first keynote speech as leader on the final day – but the scheduling is in turmoil as he should be taking PMQs at the same time.

The speech will be a crucial waypointer on how Brexit talks are going.

Jeremy Corbyn has said that he will only let Mr Johnson trigger an election after an extension has been secured.

November/December: An election looks inevitable, but Labour is hinting it might push the date back towards Christmas to humiliate the PM further.

A Downing Street source said: ‘We have known for a long time that Jeremy Corbyn is willing to sell the Union down the river in his attempts to get in to Downing Street without an election.

‘The public don’t want to see these backroom deals – they want to see parliament held to account at an election.’

No10 aides are convinced that former Cabinet minister Amber Rudd is lining herself up as Chancellor on a ticket with Labour veteran Margaret Beckett as PM.

‘She is on manoeuvres,’ one source said. ‘She wants to be the Chancellor in a Beckett government.’

Ms Rudd tore into Mr Johnson for the rhetoric coming out of his government today, saying it ‘incites violence’.

‘The sort of language I’m afraid we’ve seen more and more of coming out from Number 10 does incite violence,’ she told the Evening Standard.

Mr Johnson has faced a backlash after he repeatedly used the phrase ‘Surrender Act’ in a Commons debate to describe legislation passed by rebel MPs to block a No-Deal Brexit.

Maverick No10 chief Cummings last night said MPs should not be surprised about the level of anger directed towards them following the repeated delays to Brexit.

‘A lot of people in Parliament are more out of touch with the country now than they were in summer 2016,’ he told an event in London. 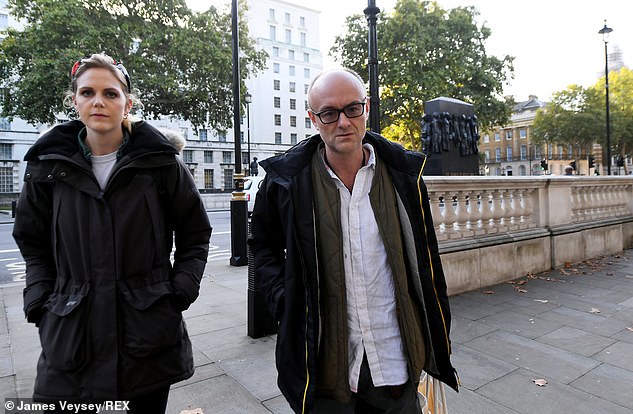