Nicola Sturgeon is using her daily coronavirus press conferences as ‘party political broadcasts’ and a lack of scrutiny of her decisions has allowed her to cultivate a ‘Saint Nicola’ persona in Scotland through the crisis, a leading MSP told MailOnline today.

Michelle Ballantyne, Conservative MSP for South Scotland, spoke out as the Prime Minister visited the country and said the pandemic would have been ‘disaster’ for Scotland if it had been independent from the UK.

Ms Ballantyne, said: ‘If you look at the outbreak at Nike that was covered up, the decision to put people in care homes with Covid – she’s used her briefings to shut criticism down and spin it like they have handled it better than in Westminster and that “Saint Nicola” has delivered – but that’s not the case at all if you look at the figures’.

Ms Ballantyne claims more recently she has adopted a policy of complaining about steps taken by Mr Johnson to ease England out of lockdown – before announcing largely the same rules days later, such as compulsory face masks on public transport, reopening shops and air corridors to Europe.

She said: ‘What she actually is doing is the same as the UK Government, with a delay. She watches the reaction and largely does the same. It’s like copying your friend’s homework after it’s been marked. It is a fascinating piece of manipulation. The press up here are letting her get away it’.

Ms Sturgeon has also been accused of using the pandemic to aid her independence campaign after insisting she would not hesitate to force English visitors to self-isolate for two weeks days after nationalists put up banners on the border telling ‘the English’ to stay away. 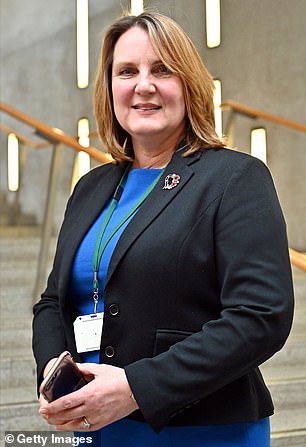 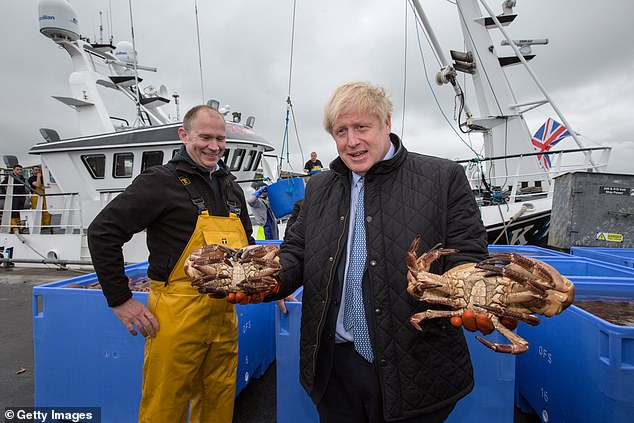 The MSP says that Ms Sturgeon gives a long speech the nation ‘to promote herself, her policies and her party’ – and is often asked soft questions by journalists who are banned from asking anything else.

She added: ‘Nicola Sturgeon hides behind systems and processes that protect the Scottish Government from being robustly questioned and the press need to be better at challenging the obvious failures in policy outcomes’.

Earlier in lockdown Ms Sturgeon repeatedly chose to gazump the PM during lockdown ahead of his own announcements to the nation.

Ms Sturgeon is running coronavirus press conferences three days on Tuesday, Wednesday and Thursday for the next fortnight to give staff behind the scenes a break. But from August the Scottish will return to doing it five days a week, despite daily infections now running at around 15 per day and daily deaths now often at zero.

Boris Johnson scrapped daily briefings exactly a month ago and will be run on an ‘ad hoc’ basis to ‘coincide with significant announcements’.

When did Boris Johnson and Nicola Sturgeon announce lockdown easing?

Ms Ballantyne said Nicola Sturgeon is often given an ‘easy ride’ by journalists who are banned from asking follow-up questions.

The Tory MSP told MailOnline: ‘There is no need to be broadcasting daily – and the fact she does it begs the question why. It is because it is a chance for her to grab air time to promote herself, her policies and her party.

‘She doesn’t get scrutinised by most of the press here  – and when they do those journalists are attacked online. It’s not the same playing field as it is down south.

‘What she actually is doing is the same as the UK Government, with a delay. She watches the reaction and largely does the same. It’s like copying your friend’s homework after it’s been marked. It is a fascinating piece of manipulation. the press up here are letting her get away it.

‘And the personal attacks and bullying for criticising her or the Scottish government is appalling’.

Nicola Sturgeon has furiously denied claims of a cover-up after an investigation linked a cluster of coronavirus cases to Scotland to a Nike conference in February.

A BBC Scotland Disclosure investigation revealed more than 70 Nike employees from around the world attended a conference at the Hilton Carlton Hotel in Edinburgh on February 26 and 27.

It is understood one visiting attendee passed on the virus, with investigations finding at least 25 people linked to the event contracted Covid-19, including eight in Scotland.

She also defended the decision to discharge elderly patients from hospital to care homes early in the outbreak, despite fury that they were not tested and might have seeded a wave of infections.

Scotland has recorded 16 new confirmed cases of coronavirus in a day, Nicola Sturgeon has announced. 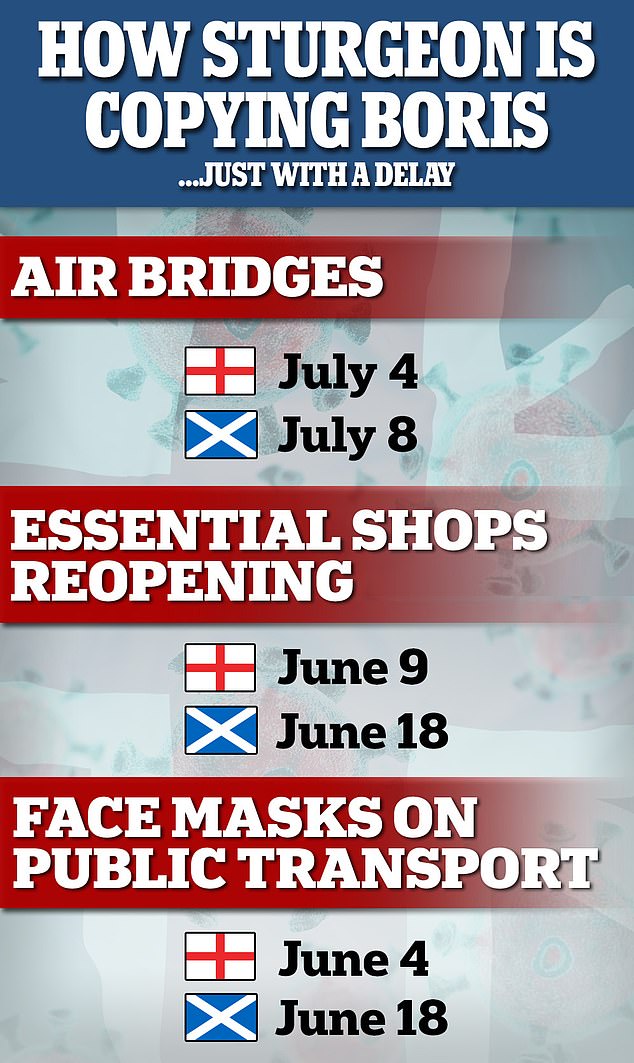 Critics have said that Ms Sturgeon has taken to announcing the same policies as England – just a few days later. These are the dates they were announced in England and Scotland

Speaking at the Scottish Government’s coronavirus briefing, she said 18,500 people have tested positive for Covid-19 north of the border.

She added provisional figures indicate four of the new cases are in Lanarkshire and added there are now 24 cases linked to the outbreak at the Sitel call centre in the region, up from 20 yesterday.

No deaths of people who tested positive for the virus have been recorded for a week running, meaning the toll remains at 2,491.

Boris Johnson today told Nicola Sturgeon that nowhere near enough time has passed since the 2014 Scottish independence referendum to require a rerun as he visited Scotland for the first time since the general election.

Mr Johnson, who was greeted by pro-independence campaigners as soon as he arrived north of the border this morning, said the ‘Union is a fantastically strong institution’ as he outright rejected the SNP leader’s demand for another border poll.

The Prime Minister reminded Ms Sturgeon that the vote six years ago was billed as a ‘once in a generation’ event.

He said: ‘That is not a generation by any computation and I think what people really want to do is see our whole country coming back strongly together and that is what we are going to do.’

Overnight Mr Johnson had suggested the coronavirus lockdown ‘could have spelled disaster’ for Scotland if it was an independent country.

He said it was the UK’s ‘massive purchasing power’ that had boosted the supply of PPE in Scottish hospitals and would mean access to ‘millions of doses of promising vaccines’.

Mr Johnson’s comments prompted a furious response from Ms Sturgeon who accused the PM of ‘championing and celebrating a pandemic’ in order to support a ‘political case’ for the Union.

The Scottish First Minister said that if she was in Mr Johnson’s shoes she would not be out ‘campaigning’ and that ‘none of us should be crowing about this pandemic in a political sense’.

Mr Johnson had already sparked SNP anger overnight after he claimed the Union had saved 900,000 Scottish jobs during the crisis and its ‘sheer might… has been proven once again’ by the pandemic.

The SNP’s Westminster leader Ian Blackford suggested the PM viewed Scotland as a minor partner in the United Kingdom and believed it is ‘too wee, too poor or too stupid’ to cope on its own.

A number of recent opinion polls showed that support for Scottish independence is now more popular than staying part of the UK.

The same polls predicted the SNP will win a majority of seats in the Scottish Parliament at next year’s election.

Then prime minister David Cameron agreed to stage the independence vote in 2014 after the SNP won a majority at Holyrood in the 2011 election, but Mr Johnson has repeatedly ruled out another referendum.

Ahead of Thursday’s visit, the Prime Minister praised the work of the armed forces in running mobile coronavirus testing centres in Scotland and providing air transfers support.

He added: ‘The UK Treasury stepped in to save the jobs of a third of Scotland’s entire workforce and kept the wolves at bay for tens of thousands of Scottish businesses.

‘More than ever, this shows what we can achieve when we stand together, as one United Kingdom.’

Writing in The Times newspaper, he added that the coronavirus lockdown could have ‘spelled disaster for the country, an economic tsunami that washed away hundreds of thousands of Scottish jobs and saw countless businesses lost for ever below the waves’.

But he added: ‘It didn’t happen. Instead the Scotland I’m visiting today is a nation where a third of workers have had their jobs protected rather than being made redundant. Where shops, factories, pubs and more have still been there to return to as the lockdown eases. And where much needed wages were paid in communities across the country even as the doors of workplaces remained firmly bolted.’

Mr Johnson said that showed the ‘power of our Union’, stating this was ‘only going to get more important as the world sails nervously into economic waters made alarmingly choppy by this unprecedented pandemic’.