Nicolas Maduro plays the conga drums with a salsa band, and dances with his wife, at a youth rally

‘We’re indestructible’: Venezuelan President Nicolas Maduro plays conga drums and dances with his wife at a youth rally amid mounting pressure to step down

Perhaps it was a sneak peek into what the future holds for the leader of what was once known as one of the most prosperous nations in all of Latin America.

Facing mounting pressure from the international community to step down as the president of crisis-stricken Venezuela, Nicolás Maduro showed off his abilities as a member of salsa band and later on the dance floor.

President Maduro was caught by video cameras behind a set of conga drums as a salsa orchestra entertained a bevy of pro-government backers during a youth rally held Saturday afternoon.

The embattled president of the oil-rich nation shared the images on his personal Twitter account along with a defying, English-written caption that read: ‘WE ARE INDESTRUCTIBLE! They cannot take away the joy of living, enjoying, struggling [fighting] and working.’ 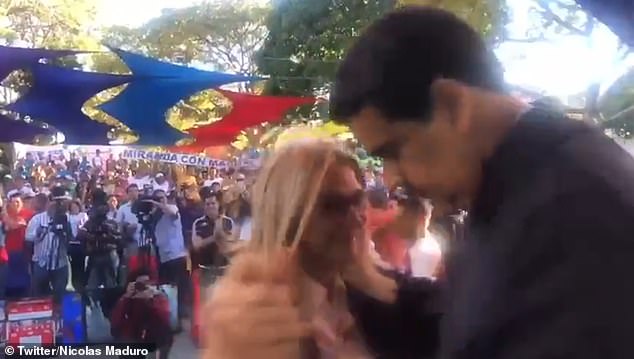 After showing off his conga drum skills, the embattled leader (right) of the South American nation dusted off his dance shoes while dancing with his wife Cilia Flores (left) 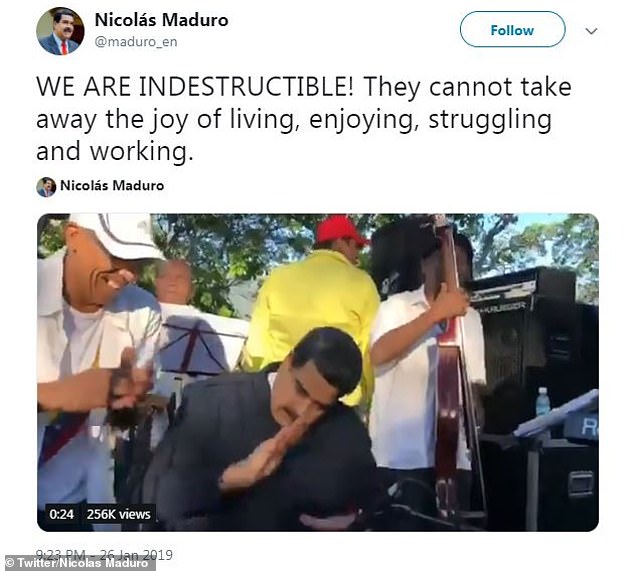 Maduro shared an impromptu performance with a live salsa band on his Twitter account  with an English written tweet boasting to his supporters and challenging the opposition government and international countries seeking to remove him from office: ‘WE ARE INDESTRUCTIBLE! They cannot take away the joy of living, enjoying, struggling [fighting] and working’

Maduro, whose mandate has been called illegitimate by a host of countries led by the United States, and the European Union, too, would later take his skills to the dance floor.

He broke in his shoes as he danced away with his wife, Cilia Flores.

‘The joy of our youth was present in today’s event, I expressed to them my support,’ Maduro’ Spanish caption read in a tweet which was accompanied by the video.

‘Each youngster in our country must incorporate themselves into school, work and social protection. Nothing stops us!’

The 52-year-old leader, who assumed the Venezuelan presidency in 2013 following Hugo Chavez’s death, was sworn in January 10 for a second term that was widely denounced by neighboring countries in Latin America and the United States.

The White House, and a fledgling host of nations opposing the communist ruler, have deemed the opposition leader and head of the National Assembly of Venezuela, Juan Guaidó, as the country’s interim president. 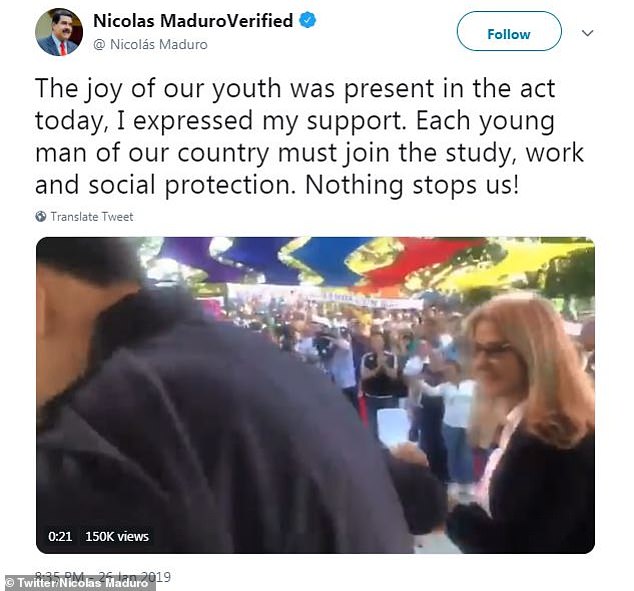 Maduro shared a number of videos of weekend visit to a youth rally where he was caught on video dancing with his wife. His Spanish-written caption implored youngsters to stay in school and work 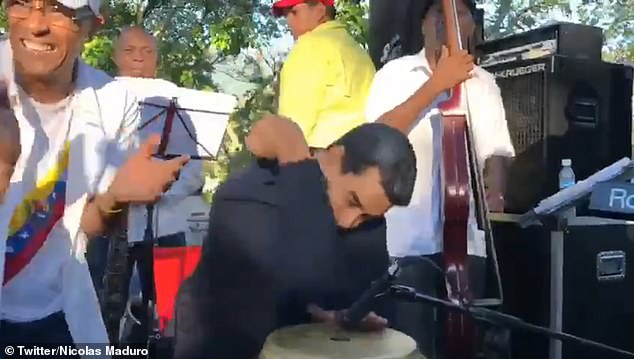 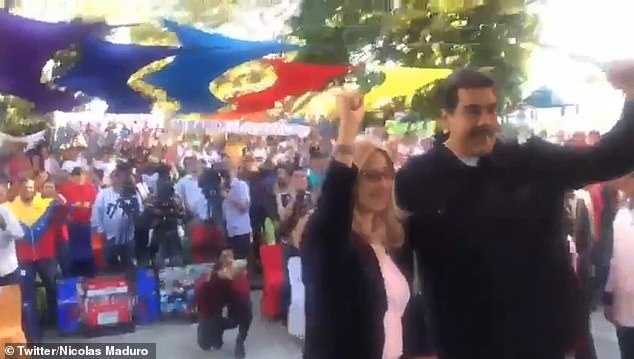 The United States levied a set of new sanctions against Maduro (pictured with his wife to the left) on Monday. The new measures looks to block $7 billion in the state-owned oil company’s assets on top of more than ‘$11 billion in lost export proceeds over the next year’

The ruling was announced to ratchet up pressure against Maduro and demonstrate U.S. support for Guaidó.

The Venezuelan opposition leader proclaimed himself interim president last week and was immediately recognized by the United States and a host of other countries soon after.

‘We have continued to expose the corruption of Maduro and his cronies and today’s action ensures they can no longer loot the assets of the Venezuelan people,’ U.S. national security adviser John Bolton told reporters at a White House briefing.

The new measure would serve to block $7 billion in PDVSA’s assets ‘plus over $11 billion in lost export proceeds over the next year’, according to Bolton.

The Venezuelan president recalled his nation’s diplomats from the U.S. and ordered all U.S. Embassy staff out of the country,  but later backtracked to try to open a dialogue over the issue.