Nicole Kidman kisses her co-star in front of her husband

They don’t hand out prizes for creating jaw-dropping, uncomfortable moments at awards ceremonies, but if they did Nicole Kidman would surely find 2017 was the year in which she quite easily aced the competition.

At the Emmys in Los Angeles on Sunday night, Nicole distinguished herself by warmly grabbing her visibly astonished Big Little Lies co-star Alexander Skarsgard and kissing him full on the mouth while her second husband, Australian singer Keith Urban, looked on.

There was a palpable ripple of shock in the auditorium as she delivered the kiss. As American U.S. Weekly magazine put it: ‘Everyone freaked out.’ In truth, such behaviour is hardly out of character.

Nicole’s had a year of living crazily starting at the Golden Globes in January when she gatecrashed an interview with Tom Hiddleston and rather giddily told a surprised TV crew that she was ‘determined to have fun’.

She was later found picking mozzarella and pizza crumbs out of her Alexander McQueen dress at an after-party and ‘shooing away’ a cocktail waitress. She then sent the internet into meltdown by clapping ‘like a seal’ at one of the winners. She later explained that she had been trying to look after her borrowed diamond rings.

A few months ago, she was on a TV chat show and actually spat out the pizza given to her to sample because she found it too tough. And let’s not even mention her flicking a V-sign at photographers during the Cannes film festival in May. 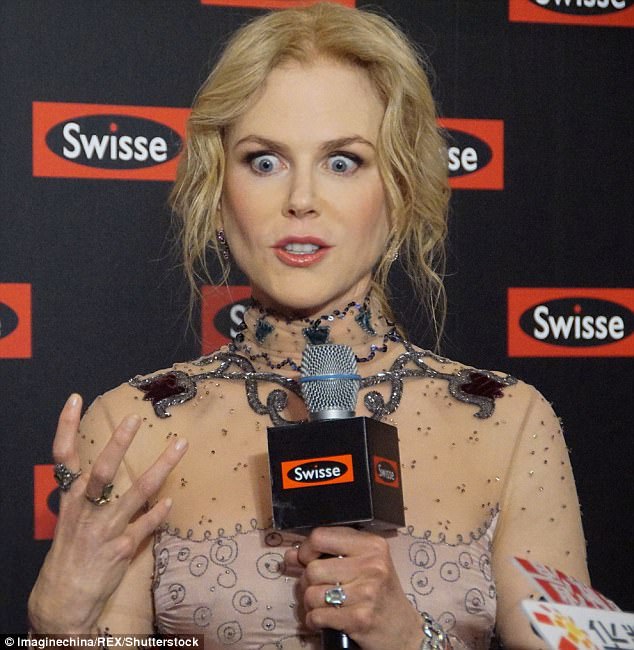 Stare: Nicole at an event for a vitamin firm she promotes 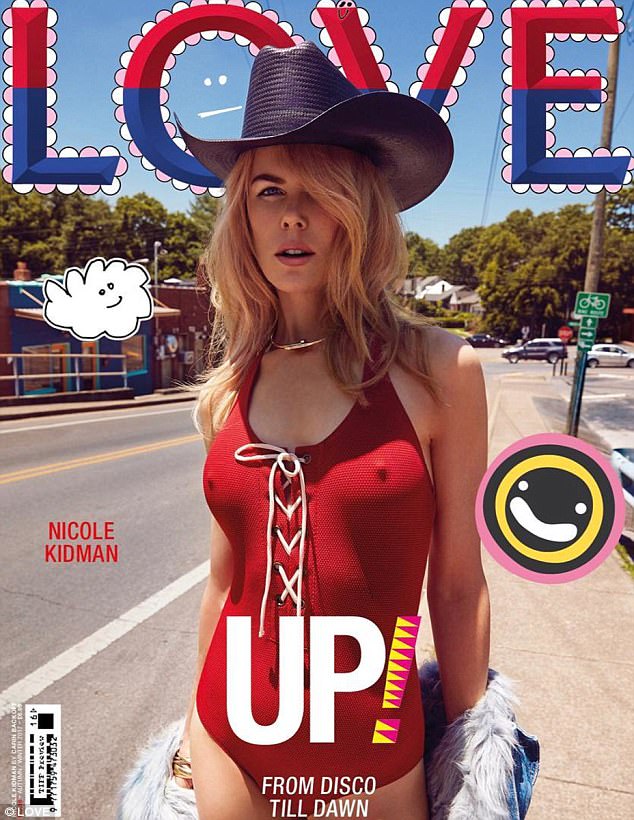 Eye-popping: Her swimsuit cover for a magazine

Then, this summer, she posed for an eyebrow-raising cover of the magazine, Love. Nicole was pictured in a red swimsuit and cowboy hat, the swimsuit provocatively laced, and leaving very little to the imagination. Later, she said: ‘When I thought about this shoot afterwards, I was like: “What was I doing? I lost my mind!” ’

And so to the Emmys, where she won Best Actress for her role as an abused wife in Big Little Lies, an American TV show.

The odd behaviour didn’t stop with the smooch with her co-star. Later she gave an emotional acceptance speech in which she lauded her two children, Sunday Rose, nine, and Faith, six.

Of her other two children, Bella and Connor, whom she adopted with first husband Tom Cruise, there was not a solitary word. (The children, both raised as Scientologists, chose to live with their father soon after Tom and Nicole separated.) 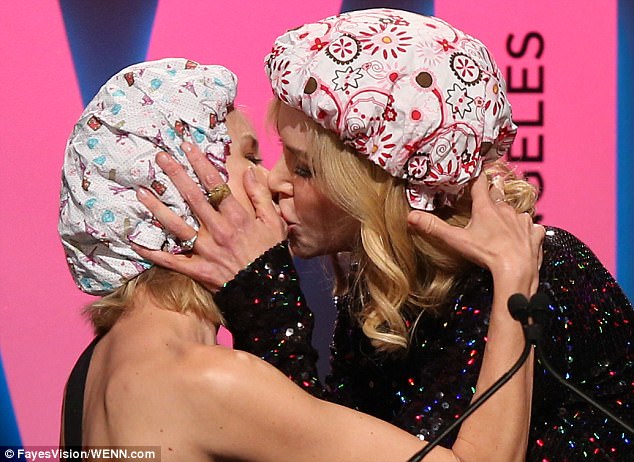 Not surprisingly, the talk of the after-parties in Los Angeles on Sunday night was of little else but Nicole’s multiple eccentricities.

It was noted that she was wearing mismatching red-carpet shoes. It has to be said that the gossip is only compounded by her spookily youthful appearance. Although she denies repeated reports of plastic surgeries, Botox and fillers, she now barely resembles the woman she was a decade ago.

So what is eating the actress who turned 50 in June? The theories are plentiful. Some say she gets outwardly exuberant and affectionate whenever there is a low in her turbulent marriage to Urban (Skarsgard was not her first full-on snog — not by a long way. When she’s not devouring the face of her husband in cringe-worthy public displays of affections, she’s also locked lips with actresses Elle Fanning and Naomi Watts).

Other, more generous, explanations are that she is enjoying a career renaissance — she was nominated for an Oscar for Lion in 2016 and her TV roles in Top Of The Lake and Big Little Lies have brought new critical acclaim — and is throwing herself, somewhat enthusiastically, into middle age. 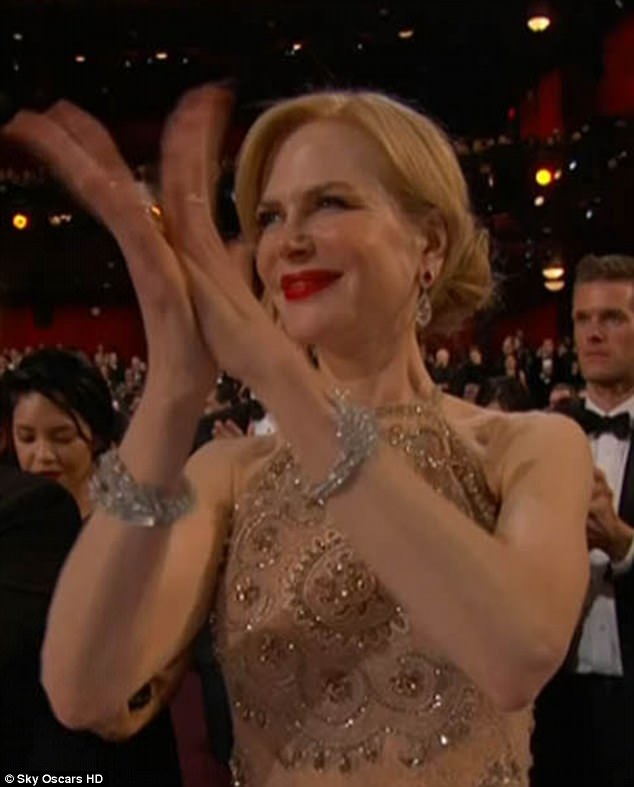 Seal of approval: Her unorthodox style of clapping 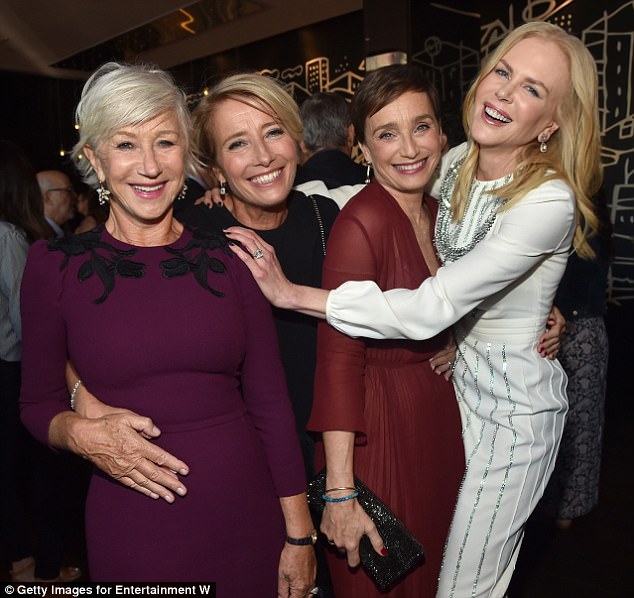 One Emmy guest said: ‘So, she was pretty goofy with the kiss. But I just think she was drunk with the power and happiness of the win. It was a big moment for her. Now she’s 50 and has all this success, why should she rein it in?’

In truth, we have been here before. She released her inner exhibitionist following the wreckage of her marriage to Cruise, in 2001.

That was the year she stripped down to her basque and fishnet stockings to play a hot showgirl in Moulin Rouge. Her chemistry with co-star Ewan McGregor was molten. Director Baz Luhrmann said that they didn’t have an affair: ‘But it was very close.’

She was similarly taboo-busting in the sexually-frank play The Blue Room opposite Iain Glen, famously dubbed ‘theatrical Viagra’. There followed a quiet period after her marriage to Urban in June 2006.

They wed just a month after they met. But now she is at it again. A month ago, two separate American tabloid magazines claimed she and Urban were on the brink of a divorce, caused by constant separations for work. There were claims he had been flirting with other women on tour. Urban branded the reports ‘gibberish’. 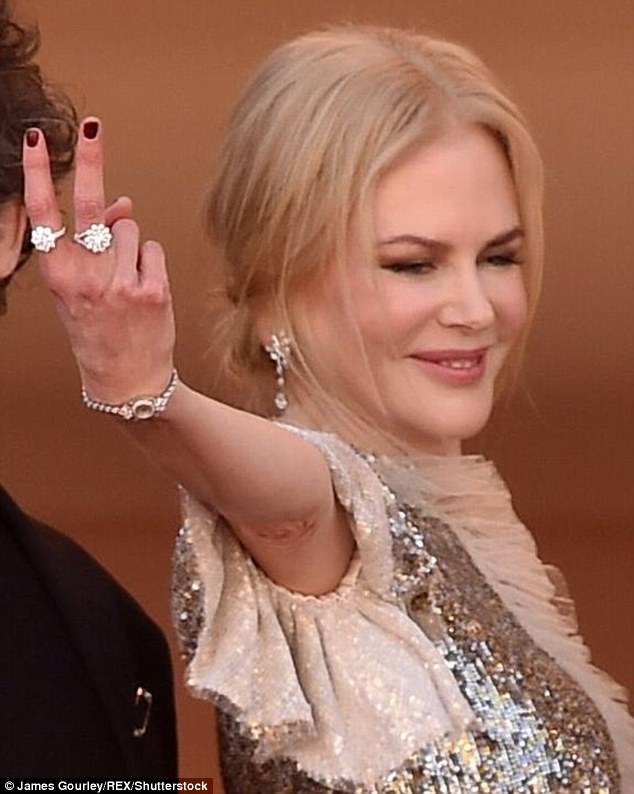 Sign of the times: She shows what she thinks of the Cannes photographers

It was said by Australian magazines the couple went on a two-day marriage retreat in November 2016 after a year in which they had been almost constantly separated by work. If true, it can’t have done much for them, as in January 2017 they were filmed and pictured having what appeared to be a gritted-teeth bout of bickering on the red carpet, at the Australian premiere of her movie Lion.

Both admit keeping their marriage together has been far from easy. Urban, who tours the world with his music and has also been a judge on American Idol, says that if he doesn’t put the marriage first then it might collapse.

He calls her ‘baby girl’, and says she needs to be treated with great care. She claims he writes her a love letter every day that they are separated, and she refuses to email or text him as she requires the ‘intimacy’ of hearing his voice over the phone. After the Emmys, the couple went to the official HBO after-party at the Pacific Design Centre. Posing on the red carpet, she gave him an award to hold and then they started kissing like teenagers.

It seems that even if everyone else was startled by her behaviour, her husband doesn’t mind one bit. 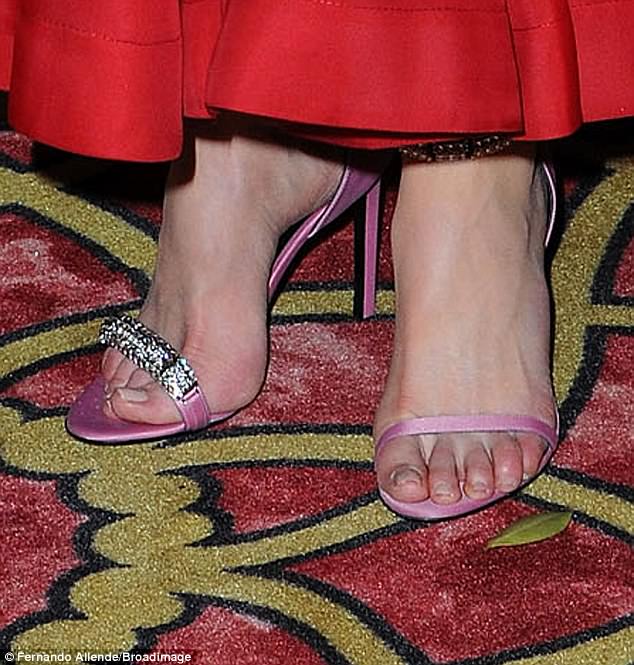 What a feat! Nicole’s odd shoes for the Emmys