The Brexit Party leader called her remarks ‘completely and utterly disgusting’ after he claimed she was ‘inciting violence’ with her comments on a BBC Radio 4 panel show.

Brand, 61, said on Radio 4 show Heresy that yobs who doused politicians like Farage with milkshakes were ‘pathetic’ and added: ‘Why bother with a milkshake when you could get some battery acid?’

The corporation has so far defied calls to axe her, and broadcasting watchdog Ofcom has so far received 65 complaints about the episode.

The BBC has been inundated with complaints and are facing accusations of ‘hypocrisy’ after bosses  decided to sack Radio 5 Live presenter Danny Baker over offensive behaviour, but stood by Brand.

Farage, who has called on the police to open an investigation into the remarks, said today: ‘I am sick to death of overpaid, left wing, so-called comedians on the BBC who think their view is morally superior.

‘Can you imagine the reaction if I had said the same thing as Jo Brand?’

In a video posted to his Twitter feed he wrote: ‘I think we know fairly clearly who Jo Brand was aiming that comment at. 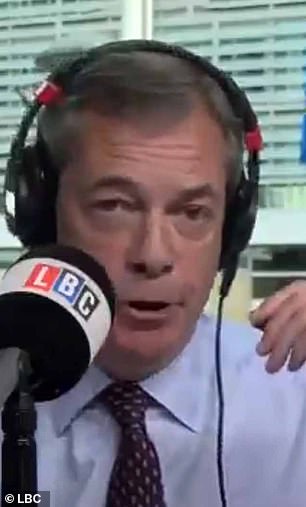 Brand, 61, (left) said on Radio 4 show Heresy that yobs who doused politicians like Farage (right, speaking today)  with milkshakes were ‘pathetic’ and added: ‘Why bother with a milkshake when you could get some battery acid?’ 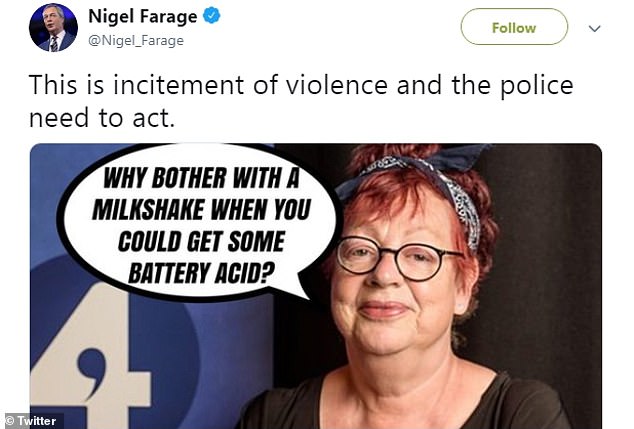 Nigel Farage yesterday said that Brand’s remarks on the comedy panel show amount to hate speech and has called for the police to intervene. It came after Jo Brand (pictured) joked on Radio 4’s Heresy that battery acid was a better option than milkshake for throwing at Brexiteers

‘A lot of people, like Jo Brand, think the referendum is a terrible mistake.

‘They have a view that is morally superior to everybody else’s and therefore it seems, that anything can be used in defence of their arguments.

‘Frankly I think this sort of behaviour is completely and utterly disgusting.

‘Can you imagine if I was to tell a story like that, about somebody on the other side of me, an Anna Soubry or someone like that?

I reckon the police would knock on my door within ten minutes. I think it’s appalling.”

Speaking outside Brand’s semi-detached home in the leafy south London suburb of Dulwich this morning, a friend said Jo was ‘away working’. 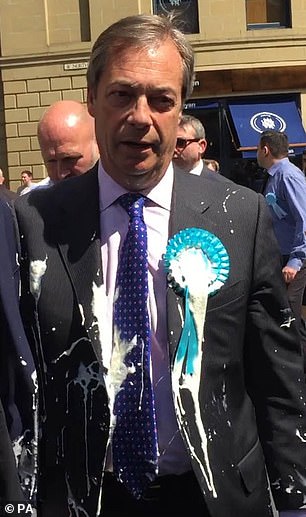 Pictured: Nigel Farage in Newcastle on May 20, when an activist threw milkshake on him

The man, in his late forties, added: ‘She is away working and won’t be back until midnight at least.

Organisers of the Henley Literary Festival in Oxfordshire today confirmed Brand is due to appear there twice today with performances penned in for 2pm and 7.30pm.

The sold-out shows revolve around a ‘darkly funny guide to being a woman’ and comes with a free book.

On the Radio 4 panel show broadcast on Tuesday night, Coren asked Brand whether she believed the country was united in agreeing we are living through a ‘terrible’ time in politics.

She responded by calling milkshake a ‘pathetic’ thing for people to have thrown at their political opponents during May’s EU election campaigning.

She said: ‘Well yes I would say that, but I think that’s because certain unpleasant characters are being thrown to the fore and they’re very, very easy to hate.

‘And I’m kind of thinking, ‘why bother with a milkshake when you could get some battery acid?’

‘I’m not going to do it, it’s purely a fantasy, but I think milkshakes are pathetic, I honestly do, sorry.’

A spokesman for the BBC said: ‘Heresy is a long-running comedy programme where, as the title implies and as our listeners know, panellists often say things which are deliberately provocative and go against societal norms but are not intended to be taken seriously.’

Brand’s comments follow milkshake attacks on Farage in Newcastle on May 20 and on World War II veteran Don MacNaughton as he campaigned for the party in Aldershot.

Milkshakes were also thrown at English Defence League founder Tommy Robinson and Carl Benjamin, also known as YouTube personality Sargon of Akkad, who in 2016 tweeted ‘I wouldn’t even rape you’ to Labour MP Jess Phillips.

‘But I don’t think throwing stuff at politicians you disagree with is a good idea. It normalises violence and intimidation and we should consistently stand against it.’

Today the backlash against Brand grew and critics called on the BBC to sack her for her comments.

Many accused the BBC of hypocrisy quistioning why the BBC had sacked Danny Baker for his allegedly racist tweet about the royal baby, but have not axed Brand.

Broadcaster Piers Morgan tweeted: ‘Why did the BBC instantly sack Danny Baker for an offensive royal baby tweet but won’t sack for saying she’d like acid to be thrown at politicians?’

Another user posted: ‘It’s a joke, however it was on the BBC and they fired Danny Baker for a vile joke and to me this is worse. Therefore the BBC should issue the same treatment for Jo Brand.’ 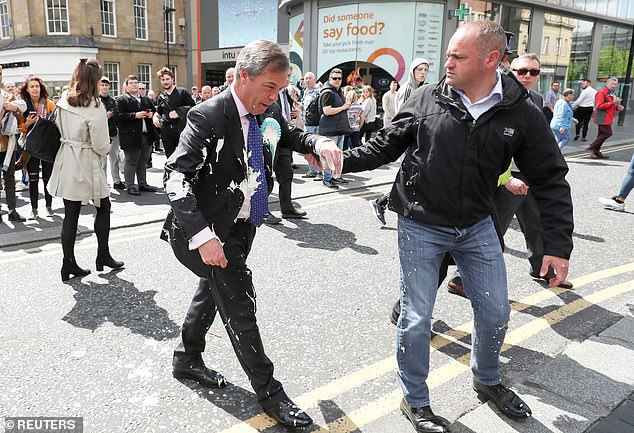 ‘Is this sort of hate speech what we fund the @BBC for? Shameful!’

Judith Bowler responded: ‘Wow! If ‘Jo public’ made such a suggestion they would be arrested.

‘Jo Brand used to be a comedian. Now, sadly, she is an idiot using her public presence to incite hatred and criminal acts.’

But others disagreed with critics because the the comments were made on a comedy show that bills itself as a ‘discussion programme which challenges established ideas and questions received wisdom’.

Victoria Coren Mitchell, the host of the show, she tweeted: ‘Nigel, I’m genuinely disappointed; we don’t agree on everything but I would totally have had you down as a free speech man. Especially when it comes to jokes.’

The host of BBC’s Heresy, Victoria Coren Mitchell, responded to Nigel Farage’s tweet that Jo Brand’s joke was an incitement of violence

TV comedian Lee Hurst tweeted: ‘Jo Brand is a comedian. She has made a joke. You may not find it funny or you may find it funny. Comedy is subjective.

‘If you criticise her because you like her target, but defend other jokes of a similar nature against targets you don’t like you are a hypocrite.’

Tom Slater, deputy editor at the website Spiked, a pro-Brexit magazine which campaigns on Free Speech issues, also said a police investigation would be wrong.

‘My magazine spiked supports the Brexit Party in its fight for democracy,’ he said. ‘But Nigel Farage’s comments today suggest he is far more cavalier when it comes to freedom of speech.

‘He seems to suggest comedians should be criminalised for telling jokes. That is deeply authoritarian. Comedians are meant to say risqué things.

‘No one in their right mind would deem Jo Brand’s comments incitement to violence. It seems there are as many snowflakes on the right as on the left these days.’

A BBC spokesman said: ‘Heresy is a long-running comedy programme where, as the title implies and as our listeners know, panellists often say things which are deliberately provocative and go against societal norms but are not intended to be taken seriously.’