A defiant Nigel Farage today insisted Brexiteers will have a good time at his Brexit party despite a ban on booze, live music and fireworks.

The Brexit Party leader claimed the ‘Establishment’ had done everything it possibly could to make the event in Parliament Square tomorrow night a ‘damp squib’.

But he said ‘none of that matters’ and the restrictions would not stop him and his fellow Leave voters from marking a ‘remarkable piece of history’.

He told MailOnline: ‘Everything that could be done to make the event a damp squib has been done by the Establishment.

‘From Big Ben which was able to bong on Remembrance Sunday and for New Year, to no fireworks and no alcohol.

‘But do you know what? None of that matters. We are there to mark and celebrate two things.

‘One, a remarkable piece of history. And two, the victory of ordinary people against the political establishment. It can rain if it wants to. It does not matter.’

Nigel Farage, pictured in Brussels yesterday, today claimed the ‘Establishment’ had attempted to sabotage his plans for a Brexit party in Westminster tomorrow night 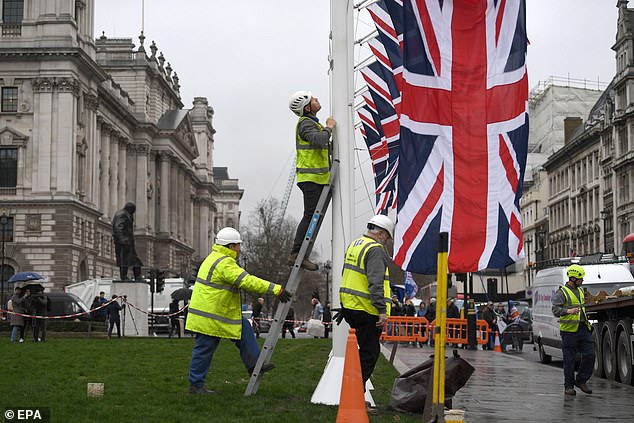 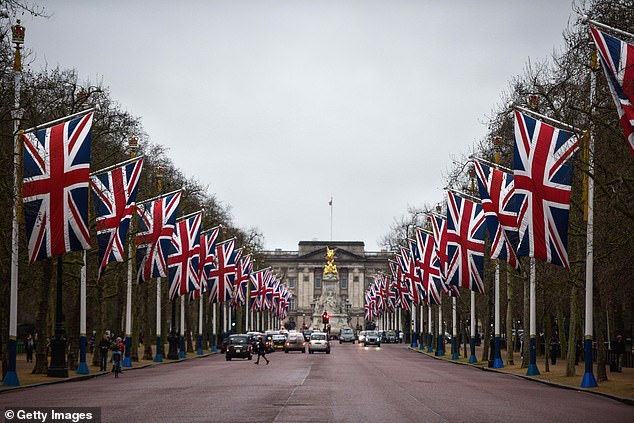 Union flags have also been erected along The Mall in central London, with Buckingham Palace framed in the distance

There will also be events to mark Brexit in Brussels with Green MEP Magid Magid hosting a ‘Brexit’s s***, but let’s party anyway’ gathering in Place du Luxembourg.

But that event tomorrow night is likely to be different in tone to Mr Farage’s which was given the go ahead by the Greater London Authority earlier this month.

Workers were busy this afternoon putting up Union flags around the square, ready for the celebrations.

But the event could be quieter than originally expected because the area outside Parliament does not have a licence for live music.

That means any music played must only be incidental to proceedings – for example if it is played in between speeches.

The organisers – the Leave Means Leave campaign group – have also been barred from setting off fireworks while Parliament Square is part of a controlled drinking zone which means revelers will be unable to consume alcohol.

Despite the restrictions, the Brexit Party has labelled the event a ‘once-in-a-lifetime’ party.

Proceedings will start at 9pm and end shortly after the UK leaves the EU at 11pm.

A handful of speakers have been confirmed for the party, including Mr Farage, Brexit Party chairman Richard Tice and Brexit Party MEP Ann Widdecombe.

An email sent to Brexit Party supporters said: ‘We would also like to ask everyone to come in good voice to sing some patriotic songs and bring along as many Union flags as they can, to wave in a patriotic display of pride.

‘Finally, we want to make you aware that Westminster is a “Controlled Drinking Zone” so it is advisable that you do not bring alcohol along.

‘We look forward to seeing you all there. Let’s make it a night to remember.’

The organisers had fought for Big Ben – currently undergoing massive renovations – to bong for Brexit at 11pm but their efforts were rejected by parliamentary authorities.

Remainers have accused Brexiteers of gloating over their victory and a number of prominent Eurosceptics have said they will not be celebrating in public due to the need to unite the country.

Mr Farage’s gathering outside the Palace of Westminster will coincide with official government celebrations to mark the moment.

Boris Johnson will start tomorrow by hosting a meeting of his Cabinet at a location outside of London as he tries to hammer home his desire to ‘level up’ the rest of the UK. 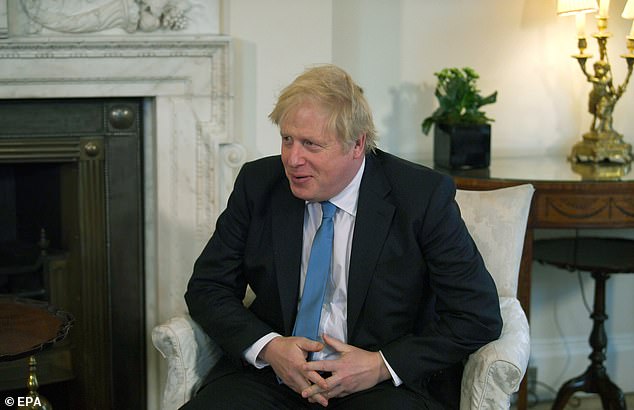 Boris Johnson, pictured in Downing Street today during a meeting with US Secretary of State Mike Pompeo, is expected to address the nation tomorrow night before the moment of Brexit at 11pm

He is then expected to address the nation tomorrow night before the clock strikes 11pm.

There will also be a countdown clock to the moment of departure with a Downing Street light show also planned.

But in a sign that the government wants to move on from the UK’s departure from the bloc as quickly as possible, it is understood there will be no Brexit-related ministerial activity over the weekend.

In fact, the government is expected to keep quiet on Brexit until the PM delivers a major speech at some point next week when he will set out his plans for trade negotiations with the EU.

Summing up the PM’s desire to move on from Brexit and focus on other things, one government source today said flatly: ‘Brexit will be done on Saturday.’