Nigel Farage rocked like he had a hornet in his tights: HENRY DEEDES watches MEPs in Strasbourg

Nigel Farage rocked back and forth like he had a hornet in his tights: HENRY DEEDES watches the oddball MEPs in Strasbourg

Momentary bamboozlement over in the European Parliament today. Nigel Farage was up on his high hooves and had just uttered an unfamiliar word.

Brows furrowed. Eyeballs flickered from side to side. Google Translate clearly wasn’t being much help either.

But since it had been uttered by Farage, most correctly assumed it was none too complimentary.

The dictionary defines ‘pipsqueak’ as ‘a person or thing that is insignificant or contemptible’.

The Brexit Party leader was referring to Luxembourg’s prime minister, Xavier Bettel, following the latter’s ambush of Boris Johnson this week. But Farage might just as well have been referring to his European colleagues around the chamber.

Quelle horreur! Rarely have I seen such a bizarre collection of oddballs under one roof. And bear in mind I’ve just been to the Lib Dem conference.

Some of the more snowflakey MPs in the House of Commons want the chamber to be redesigned into a horseshoe shape like the European Parliament. The idea is that it will make debates more cordial, less confrontational.

All I can say is, a fat lot of good it did in Strasbourg yesterday morning. There it was that the Parliament was holding its latest plenary on Brexit. Half an hour into the session and it was Farage’s turn to speak.

Up he hopped, rocking back and forth on his heels as he’s wont to do when he’s got a hornet in his tights. No polite dawdling, no stuttering preamble. Bang.

Surrounded by miniature Union flags, he pointed out that events in Luxembourg this week proved that good faith towards the UK does not exist.

Luxembourg’s behaviour, Farage observed, had been disgraceful. Monsieur Bettel deliberately set out to ‘ritually humiliate the British Prime Minister in the most astonishing way,’ he said, his larynx coarse and raspy as though he’d been gargling fresh gravel.

Clearly no-one has yet convinced him to trade in the cigarettes for a vaping device.

Farage predicted the EU would come to an arrangement on the Irish backstop, because they are too terrified of the UK leaving without a deal – as he would prefer – and making a success of it. From behind him came applause from the Brexit Party’s 29 MEPs. 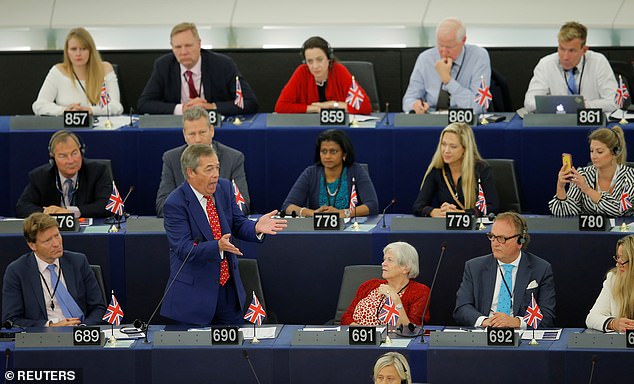 Surrounded by miniature Union flags, Farage pointed out that events in Luxembourg this week proved that good faith towards the UK does not exist

Smoothy-chops Brexit negotiator Michel Barnier, twisted and contorted so as to face his assailant, jabbed his thumb nervously as though trying to activate an ejector seat button. Meanwhile, his gnomish sidekick, Jean-Claude Juncker, stared blankly ahead. Dreaming of a mid-morning eye-opener, perhaps.

Farage then turned his fire on Belgian MEP and perpetual Brexit-mocker, Guy Verhofstadt. ‘We want no part of your European Empire,’ he thundered. More applause from his cronies.

Ann Widdecombe jiggled her head and whacked her desk with the palm of her hand. She reminded me of an over-excited dolphin clapping its flippers.

How some of them must just wish Barnier et al would say hang to the backstop and be done with them.

They were particularly rowdy when we heard from the dreaded Verhofstadt, who had prepared a little rant of his own. He referred to Brexit Party members as ‘Euroseptics’, taunting them for not having any seats in Westminster.

‘And they like saying Europe is undemocratic,’ he giggled. It was a bold approach but Herr Verhofstadt possesses neither the oratory skills nor the necessary wit.

At one point, he suggested Boris stop behaving like the angry Hulk during negotiations and be more like Mrs Doubtfire, a reference to the Robin Williams film in which he disguises himself as a kindly old nanny.

Verhofstadt allowed his remark to percolate before flashing his audience a gap-toothed grin, as though he’d cracked an absolute thigh-slapper.

Ze Belgian sense of humour. It is no laughing matter, I fear.