Nigel Farage has insisted a no-deal Brexit is now ‘the only acceptable deal’.

The Brexit Party leader said his party would fight in every seat at a general election if the government tried to pass the existing withdrawal agreement, but saying if Boris Johnson ‘summoned the courage’ to pursue No Deal, The Brexit Party would work with him.

He added: ‘A Johnson government committed to doing the right thing and The Brexit Party working in tandem would be unstoppable.’

The Brexit Party was launched in April this year ahead of the European Parliament elections, and after former Prime Minister Theresa May agreed to extend the Brexit deadline to 31 October.

Nigel Farage today unveiled a 635-strong army of Brexit Party MP candidates as he warned Boris Johnson not to ‘sell out’ Leave voters.

Mr Farage claimed the Tories and Brexit Party would be ‘unstoppable’ if they worked together at a general election and Mr Johnson would win a ‘very big majority’.

But he suggested such an alliance was unlikely because of fears the Prime Minister will not deliver a clean split from Brussels and is poised to ‘sell out’ Brexiteers.

He said he would only agree to form a ‘non-aggression pact’ with Mr Johnson if the Tories switched to backing a No Deal Brexit as the only acceptable EU divorce option.

He then told Mr Johnson that unless the Conservatives shifted towards a harder Brexit his upstart party ‘will fight you in every seat’.

Mr Farage then proceeded to showcase 500 of the Brexit Party’s 635 candidates who have been selected to stand at the next general election at a rally in London.

Nigel Farage used a rally in London this morning to unveil the Brexit Party’s updated list of MP candidates. 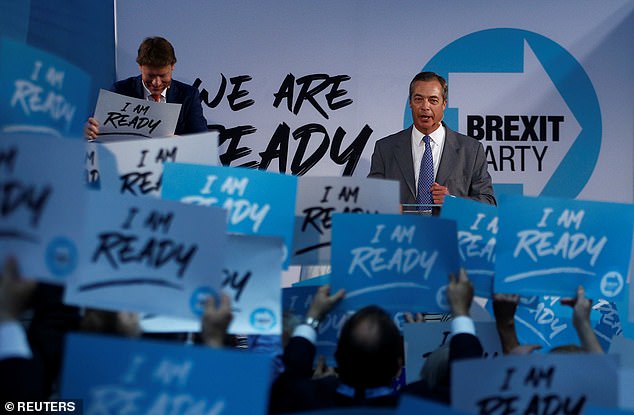 With 635 candidates now approved, the Brexit Party is just shy of the 650 needed to contest every constituency in the UK at the next general election

The Brexit Party’s strong position in the opinion polls in recent months has led to calls for Mr Farage and Mr Johnson to do a deal to create a single pro-Brexit force at the next election.

Mr Johnson has resisted those calls but senior Tory figures acknowledge that such a deal would unite the Leave vote behind a single candidate in each constituency and put the PM on course for victory.

Failure to do a deal would risk splitting the Brexit vote and potentially clear a path for Labour or Lib Dem candidates to win.

Mr Farage told ITV’s Good Morning Britain programme a deal could still be done between the Tories and his party but he suggested it was unlikely.

He said: ‘Absolutely, we would work with anybody, whether it was the Conservative Party or certain people in the Labour Party, who hold the same view.

‘We would work with anybody to get the right result but what we will not do is stand aside and let Brexit be betrayed for a second time.’

He added: ‘Our support, and the Conservative support together would be unstoppable and Boris Johnson would win a very big majority.’

But Mr Farage said he feared Mr Johnson was now venturing down a similar path to his predecessor in Number 10 Theresa May.

Mr Johnson is trying to persuade the EU to delete the Irish backstop from the Brexit deal but Mr Farage insisted that would not be enough to save the existing agreement.

‘Boris has won the leadership telling us we will be out by the 31st October, but what he’s done in the last week he’s gone back to Brussels and clearly what he wants to do is reheat the failed withdrawal agreement,’ he said.

‘Even without the backstop it’s still the worst deal in history… we will not be a free, independent nation.’

He added: ‘We are standing and we will stand in every seat in this election. We say to Boris Johnson, if you sell us out on Brexit with this awful withdrawal treaty we will fight you in every seat.’

The Eurosceptic MEP also poured cold water on the suggestion that the Brexit Party had peaked and was now heading down hill. 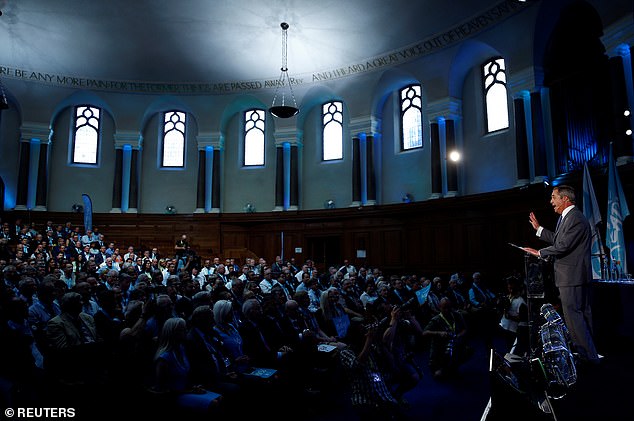 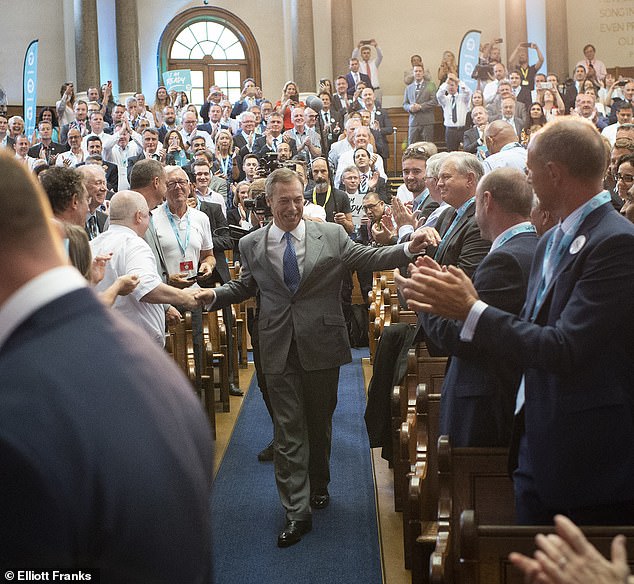 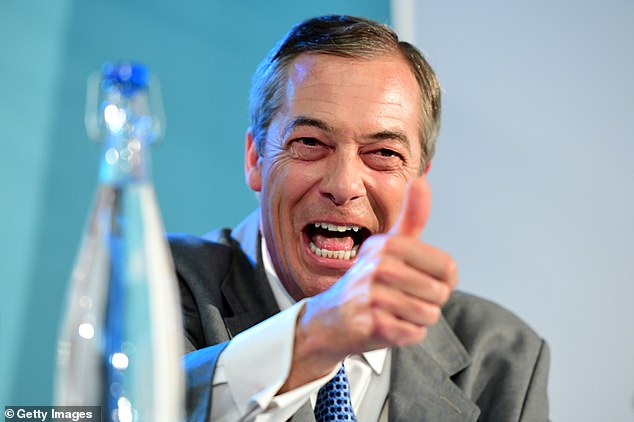 He said: ‘My fox has been shot so many times over the years, you wouldn’t believe it.’

He suggested that if the Tories did wholeheartedly switch to backing a No Deal Brexit he would clear a path for them at the next election.

‘I would put country before party in those circumstances,’ he said.

Mr Johnson has promised to deliver Brexit ‘do or die’ and with or without a deal on October 31.

His preference remains striking a deal with Brussels but he has said the UK will be ready to leave with No Deal if the current stalemate cannot be resolved.

Mr Farage used a rally in London this morning to make clear that his party is ready to go to war with the Tories at the next general election.

He told the packed hall that ‘a few weeks into his premiership Boris is already going off the rails’.

‘I’m pleased Boris Johnson has brought some energy and optimism to that job,’ Mr Farage said. 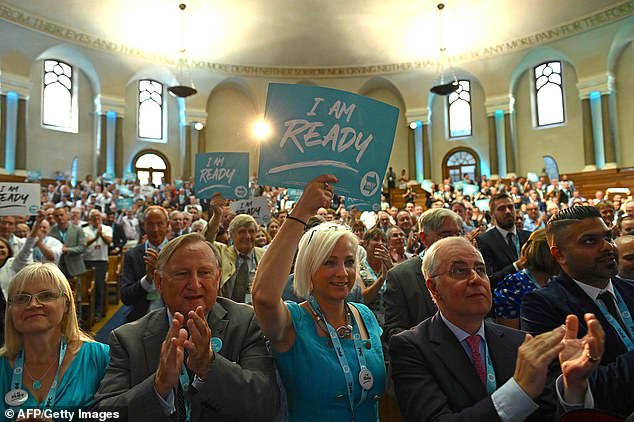 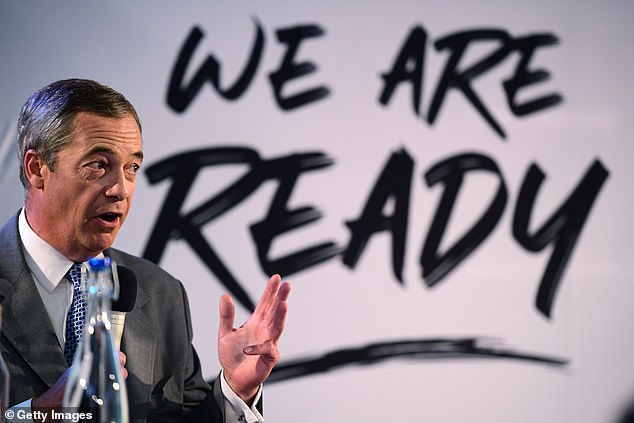 Mr Farage delivered a simple message ahead of a potential snap general election as he told his supporters: ‘We are ready’

‘I’m pleased he has said we will leave ‘do or die’ on October 31. The trouble is we have heard it all before.’

He added: ‘My guess is I think there is a greater than 50 per cent chance that we will face a general election in the autumn.’

The party said it now had 635 approved MP candidates – just shy of the 650 needed in order to contest every constituency in the UK.

Richard Tice, the chairman of the Brexit Party, said: ‘The message today is simple: We are ready.