Nigella Lawson applies to build new conservatory at her £4.8milliion home – and then appears in architect’s pictures they sent to the council

TV chef Nigella Lawson has been caught in architect’s pictures after she applied to build a new conservatory at her £4.8m London townhouse.

Ms Lawson, 62, is planning to knock down a leaking old glasshouse at her mews property, renovated from old coach houses, in a conservation area in Chelsea.

But when designers took images to send to Westminster Council so they could approve the plans they caught the BBC star standing with her hands on her hips inside the soon-to-be demolished extension.

The British celebrity cook moved into the Chelsea property in 2013 after splitting from her then-husband, millionaire art dealer Charles Saatchi.

She shares the home, which reportedly boasts a wine cellar and cinema, with her two children, Cosima and Bruna.

TV Chef Nigella Lawson has been caught in architect’s pictures after she applied to build a new conservatory at her £4.8m London townhouse

Nigella applied to the council recently to improve the house after telling planning officers it’s conservatory – installed in 1989 – had come to the end of its life.

Pictures show rainwater leaking between rafters into the famous kitchen where she cooks up many of her popular recipes.

The conservatory currently houses her green Aga, cooking utensils and shelves of crockery and pots and pans.

She wanted to replace the rickety structure with a new all-glass design made by glass architecture company Trombe.

Planning documents say: ‘The property has previously been extended with a single storey rear conservatory. 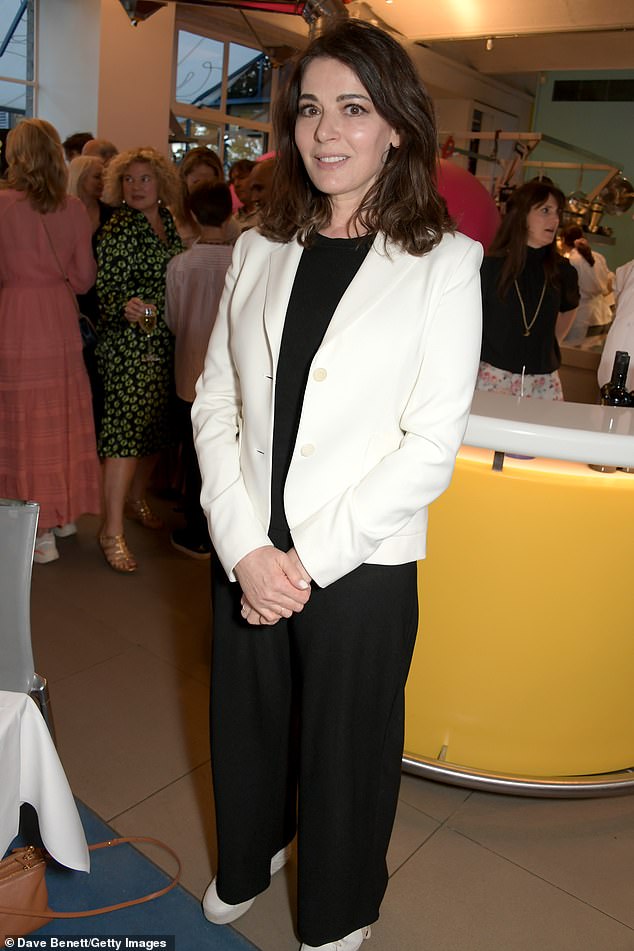 ‘This timber frame structure has reached the end of its lifespan, and the applicant would like to obtain consent to replace it with a simple contemporary structure of the same footprint.

‘The applicant wishes to obtain planning consent for the reconstruction of the conservatory, in order to replace an existing defective structure, achieve greater energy efficiency, and to improve the relationship between the house and the garden.’

Although small, the home is made much larger by the addition of the wood and glass conservatory at the rear.

Eighteen neighbours were consulted on the plans and no objections were received.

Nigella was given full planning permission; although was warned work needed to be carried out between certain hours and that she is not to use the roof of the new structure as a terrace.