Nigella Lawson covers up in long-sleeved dress on Auckland beach

She hit headlines in 2011 when she was pictured wearing a burkini on an Australian beach, as reports stated her ex-husband Charles Saatchi didn’t want her to get a tan.

And Nigella Lawson was back to covering up on the beach once again last week, as she was spotted strolling the sunny shores of Auckland, New Zealand, in a full-length blue-and-white button down Zara dress – and further shielded herself with a parasol.

The 58-year-old celebrity chef cut a stylish figure in her unconventional beach attire, which featured long sleeves and was buttoned all the way up to her neck, as she enjoyed a leisurely day out with a small group of friends.

Covered up: Nigella Lawson was spotted strolling the beach in Auckland, New Zealand, in a long-sleeved maxi dress last week

While other women in her immediate vicinity soaked up the rays in barely-there bikinis, the stunning TV personality added a pair of black fingerless gloves to her ensemble, seemingly adding to her efforts to avoid any expose to the sun.

She also covered up her long brown tresses with a wide-brimmed white hat, which she did dare to remove at one point during her relaxing excursion.

Her outing comes seven years after she was photographed sporting a burkini on Sydney’s sun-kissed Bondi Beach, although it was later reported that she wore the Muslim swimwear to appease her then-husband Charles. 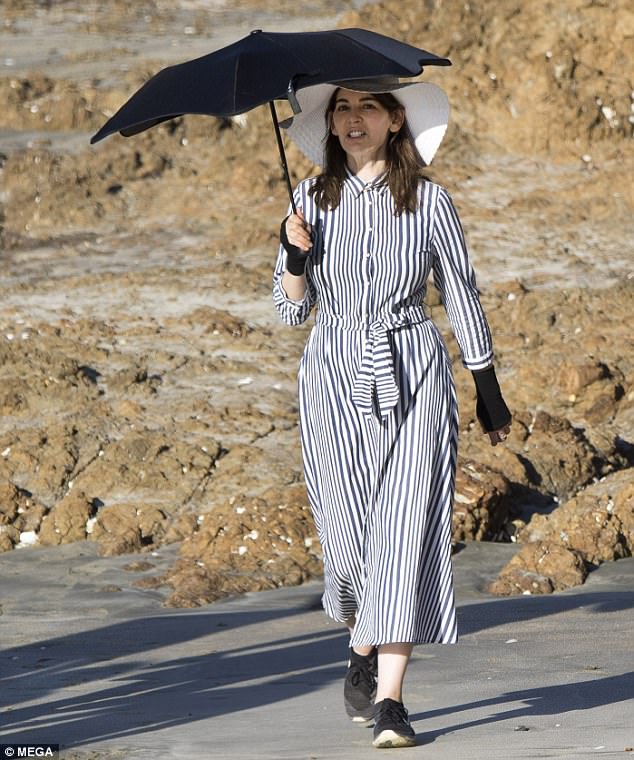 Headwear: The celebrity chef teamed her buttoned-up number with a wide-brimmed white hat 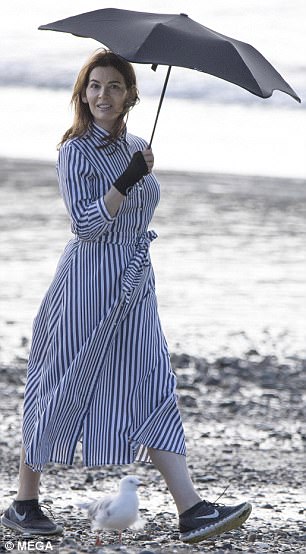 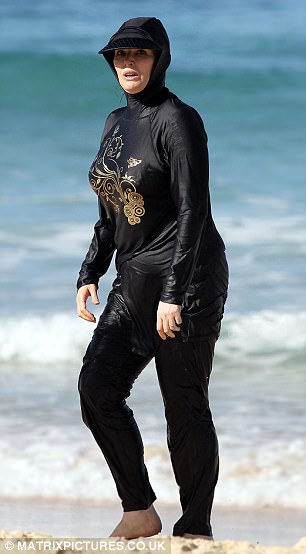 Burkini: Her covered-up outing was reminiscent of the burkini she was seen sporting when she took to the shores of Sydney’s sun-kissed Bondi Beach back in 2011 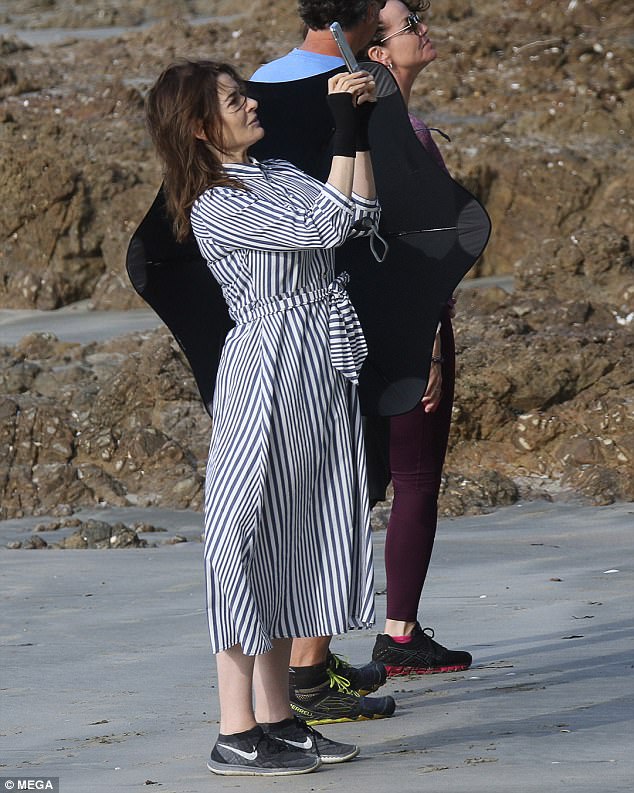 Pic: At one point, she did away with the hat and parasol as she snapped pictures of the scenery

Back in 2014, friends of the star told the Sunday People that she did not pick the suit because she was shy about showing off her curvy figure, or because she was worried about getting sunburned in the 90-degree heat.

The friend said: ‘Charles wants his women to be porcelain white or have alabaster skin. That’s the real reason why Nigella was so covered up.’

In an 2013 interview with Time magazine, Nigella admitted she did not think much of the suit either, saying: ‘It was a very unflattering photo. Dry, I looked a lot better. Wet, I could see the hippo resemblance.’ 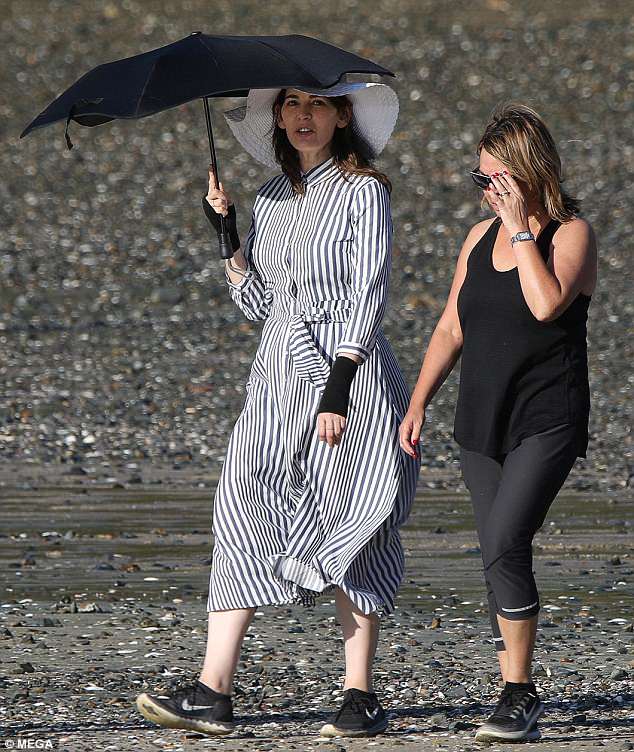 Shielded: Keeping her feet comfortable in a pair of black Nike running shoes, the 58-year-old TV personality also shielded her hands with a pair of fingerless gloves 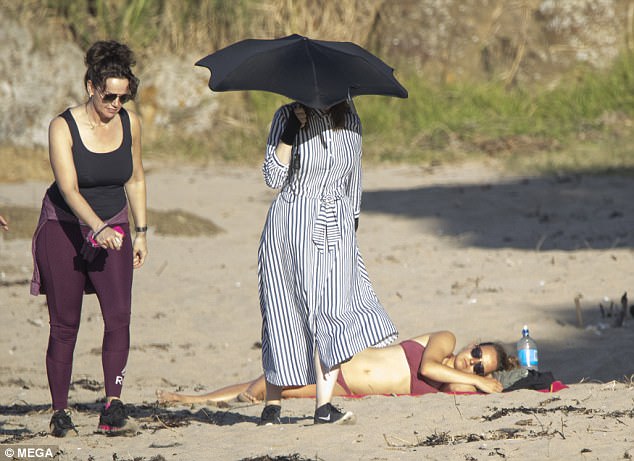 Rays: The star strolled past a bikini-clad sunbather during her leisurely day out at the beach

The mother-of-two ­divorced the art collector after ­pictures emerged of him with a hand around her throat at a London ­restaurant in June of 2013.

Nigella bought the £79.99 burkini from UK-based Islamic swimwear company Modestly Active and has been credited with a boom in sales.

Burkinis are lightweight outfits made of Lycra and nylon that leave only the hands, feet and face showing.

They were originally imported from Turkey and Morocco, but now London-based companies Modestly Active and Modestkini, which have been selling the swimsuits since 2007, are cashing in on the boom. 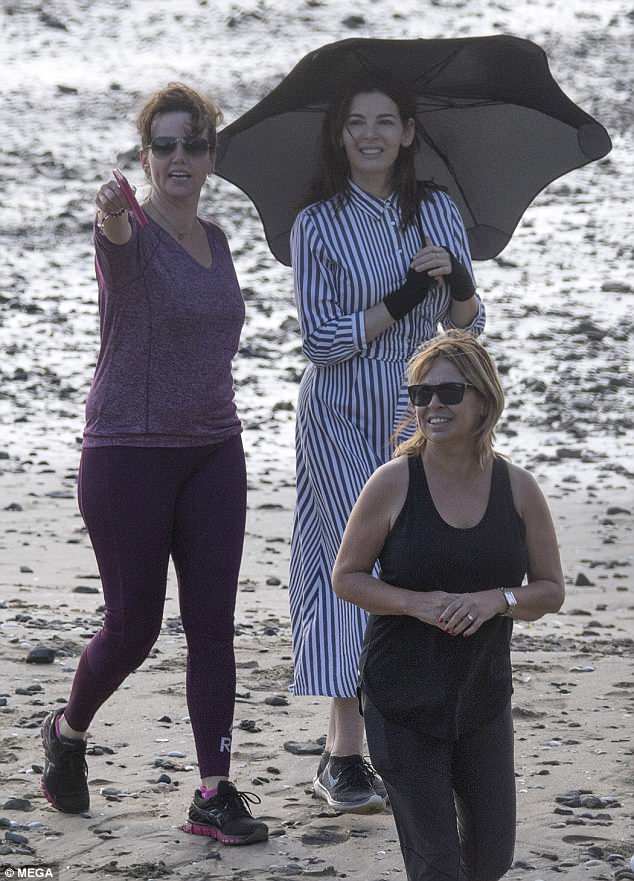 Enjoying the sights: The mother-of-two smiled as she checked out the sights with her friends

Svelte: The brunette beauty is sporting a slimmed-down frame after taking up yoga regularly

While Nigella likes to cover up at the beach, she currently boasts a new frame after slimming down, which she has attributed to taking three yoga classes a week.

Despite dropping from a size 16 to a size 12, the television favourite insisted that she has ‘never dieted’ in an interview with Good Housekeeping in 2015.

She told the publication: ‘I have never been on a diet to try to lose weight,’ she said. ‘I feel like I haven’t lost weight, but I’m possibly in better shape.

‘As you get on in life, you value feeling well as opposed to looking well. Yoga certainly makes you feel great, and you want to carry on feeling great. No one should be put on this earth to go on a diet! No one should eat themselves ill either.’ 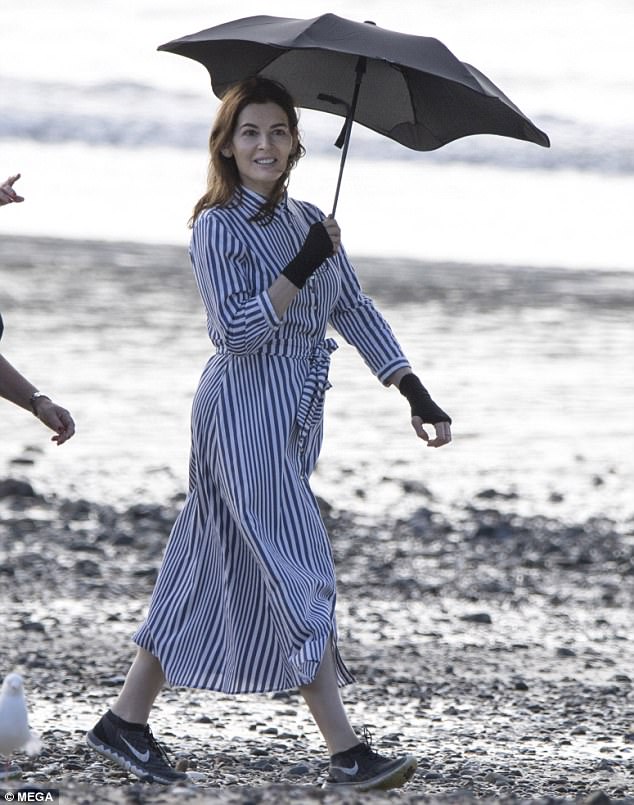 On the promo trail: The TV chef recently promoted her new book, At My Table, in Australia 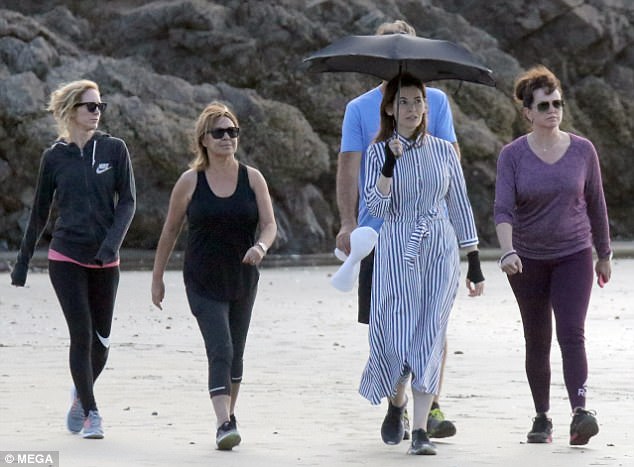 Rest and relaxation: Nigella looked relaxed as she walked along the coastal city’s sandy shores