Nigerian Instagrammer Hushpuppi was kidnapped from Dubai by the FBI, his lawyer claims

A Nigerian influencer who posted photos of his life of luxury amassing 2.5 million Instagram followers was kidnapped by the FBI from Dubai, his lawyer has claimed.

In June Ramon Olorunwa Abbas – known to his followers as Ray Hushpuppi – and another man –  Jacob Ponle (aka Mr Woodberry) – were both arrested in Dubai under suspicion of a £350 million cyberscam.

The FBI and Dubai police stormed the 37-year-old’s apartment in the city seizing more than £30 million in cash, before the pair appeared in a Chicago court on July 3.

However, the United Arab Emirates has no extradition treaty with the United States, and Mr Abbas’ lawyer – Gal Pissetzky – has said that the FBI and U.S. government acted illegally in transporting him from Dubai.

‘In my opinion, the FBI and the government here acted illegally when they kidnapped him from Dubai without any legal process to do so,’ Mr Pissetzky said to the BBC.

‘There was no extradition, there were no legal steps taken, there were no court documents filed, it was simply a call to the FBI. He is not a citizen of the United States, the U.S. had absolutely no authority to take him.’

Ramon Olorunwa Abbas – AKA Ray Hushpuppi – shared photos of his extravagant lifestyle with his 2.5 million Instagram followers (picture above). However, in June he was arrested in Dubai and has since appeared in a Chicago court. His lawyer claims the U.S., who do not have an extradition treaty with the UEA, kidnapped Abbas

In a statement posted on Facebook, the Dubai police said that the FBI director had thanked them for extraditing Abbas.

However, the U.S. Department of Justice told the BBC that the accused was expelled from Dubai, rather than extradited, reportedly telling the broadcaster ‘you’ll have to ask them about why they called it an extradition’.

A public statement made the U.S. Department of Justice following the arrest of Abbas said that ‘Ramon Olorunwa Abbas, 37, a.k.a. “Ray Hushpuppi” and “Hush,” a Nigerian national, arrived in Chicago Thursday evening after being expelled from the United Arab Emirates (UAE).

‘FBI special agents earlier this week obtained custody of Abbas and brought him to the United States to face a charge of conspiring to engage in money laundering,’ it said. 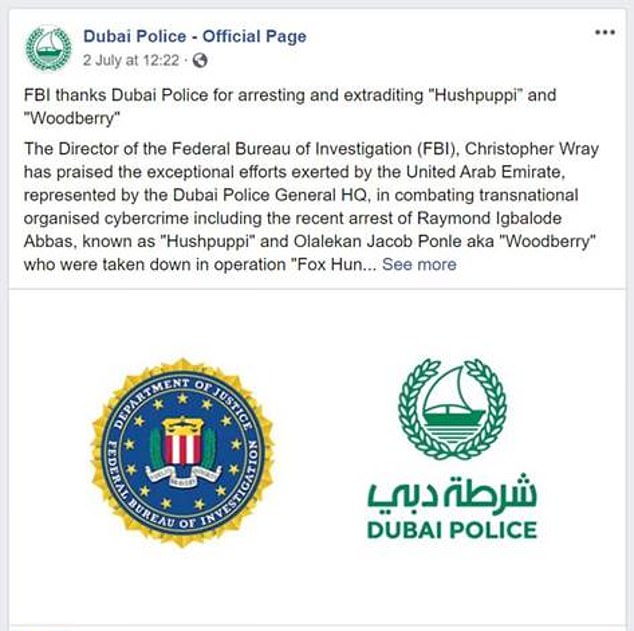 Dubai police posted a message on their Facebook page claiming that the FBI thanked them for arresting and extraditing ‘Hushpuppi’ (pictured above). The FBI denied that he was extradited, saying that he was expelled. However, Abbas’ lawyer says that if this was the case he would have returned to Nigeria

However, Abbas’ lawyer is not convinced that he was expelled. ‘If Dubai wanted to expel him, they should have expelled him back to Nigeria. I’ve never heard of anything like that. That is the real story here,’ he said to the BBC.

The Department of Justice said that Abbas ‘flaunted his elaborate lifestyle’, and is facing criminal charges of conspiring to launder hundreds of millions of dollars through scams, including schemes that targeted a U.S. law firm, a foreign bank and an English Premier League football club.

It is believed that investigators also found email addresses of two million victims on several phones and computers seized during the operation.

During the raid 13 luxury cars worth $6.8m, 21 computers and 47 smartphones were seized as well as suitcases full of cash.

‘The suspects targeted victims overseas by creating fake websites for well known companies and banks in a bid to steal victims’ credit card information and then launder the stolen money,’ Brigadier Jamal al-Jalaf, of Dubai Police CID, told The Times. 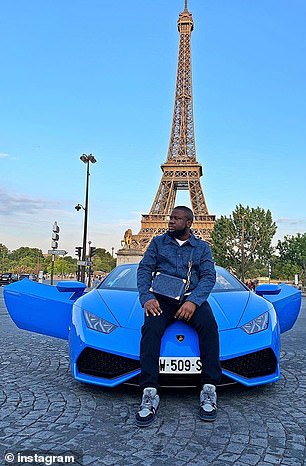 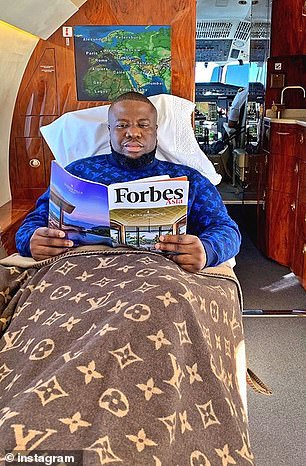 Abbas is accused of money laundering by the FBI and funding his extravagant spending with criminal activity. He has gained 100,000 new followers on Instagram since his dramatic arrest

In one example, the affidavit accuses Abbas of conspiring to launder $14.7m (£11.7m) that was stolen from a foreign financial institution last year. While it does not name the institution, a bank in Malta reportedly lost the same sum to hackers in the same month.

In a statement when the charges were announced, United States Attorney Nick Hanna said ‘This case targets a key player in a large, transnational conspiracy who was living an opulent lifestyle in another country while allegedly providing safe havens for stolen money around the world.’

Mr Pissetzky argues that his client was paid by designer brands to promote products to his followers, and that he made his money legitimately.

Abbas reportedly started out as a secondhand-clothes trader in Lagos before claiming to be a billionaire property developer in Dubai.

He says he posts about his luxury life to inspire others to make more of their lives. ‘I post a few of these things so that someone can see my page someday and decide not to give up,’ he once told his millions of Instagram followers.

If convicted, Abbas faces a statutory maximum of 20 years in U.S. federal prison. 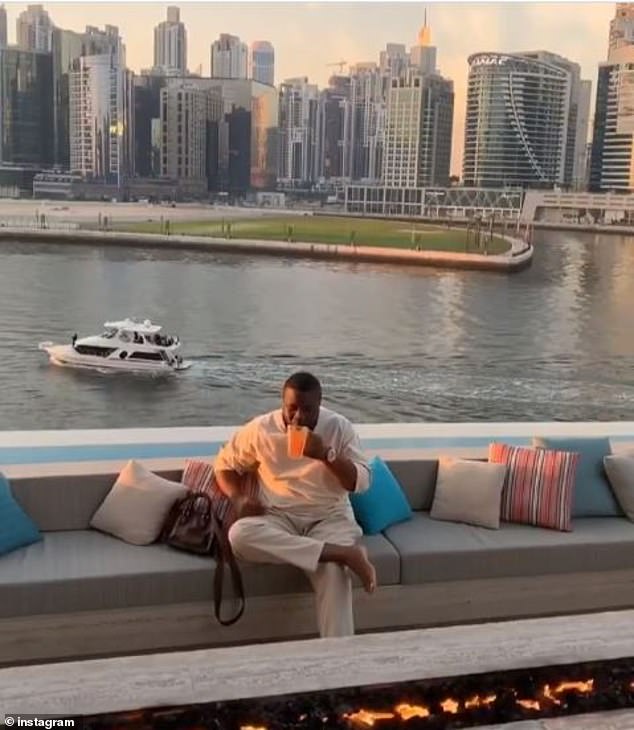