Thousands of NSW public and Catholic school teachers are striking for 24 hours while industrial action by rail workers is affecting the frequency of train services.

Teachers will descend on Sydney’s CBD on Thursday, angry at a NSW budget that offered no more than a three cent pay rise this year, with the possibility of 3.5 per cent the following year.

The strike is expected to affect about a million families, just a day before a two-week school break.

It’s the first time in more than 25 years both unions have joined forces to strike for 24 hours.

‘We have a crisis in the form of a teacher shortage, a crisis that is the government’s own making,’ NSW Teachers Federation President Angelo Gavrielatos told reporters on Wednesday.

‘The government has known for years the causes of this crisis: uncompetitive salaries and unsustainable workloads.

WHY ARE THERE STRIKES?

Teachers are striking for 24 hours from Thursday

They’re angry at a NSW budget that offered no more than a three cent pay rise this year, with the possibility of 3.5 per cent the following year

Education Minister Sarah Mitchell is disappointed by the decision to strike and says it’s politically motivated.

Ms Mitchell defended the government’s public sector wages policy, calling it the most generous in the country.

Meanwhile, the rail union says industrial action will continue this week despite a verbal commitment from Transport Minister David Elliott to spend $264million on safety modifications of a Korean-made fleet.

The Rail, Tram and Bus Union has been locked in long-running stoush with the government over the modifications.

RTBU Secretary Alex Claassens said the union wants to see the complete package and commitment in writing, and discuss it with members, before any action is called off.

‘Rail workers and commuters have been burnt too many times to believe what one minister in one meeting says,’ Mr Claassens said.

He advised commuters to avoid train travel or allow extra time as services will be less frequent and carriages more crowded. 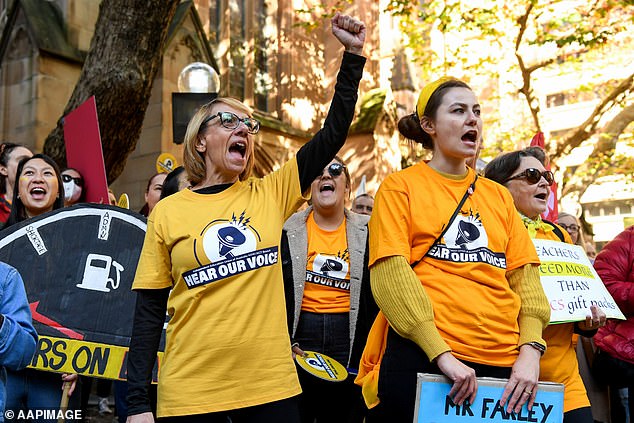 ‘Normally in the peak period customers wait one or two, maybe three minutes for a train,’ he told Sydney radio 2GB on Thursday.

The rail union began industrial action on Tuesday by cutting train speeds to 60 km/h. On Friday, speeds will be reduced by 70 per cent during peak periods.