Nine in 10 children are glued to screens and sleep badly

NINE out of ten children are not getting enough sleep or exercise and spend too much time at screens, experts warn.

Children who spend hours on smartphones and tablets move around less, and the blue light from the devices disrupts their sleeping patterns.

The study, by Loughborough University and University College London, looked at screen time, sleep and physical activity in children based on the Millennium Cohort Study of 2015 and 2016.

The study found that more than three-quarters of teenagers spend more than two hours on screens during the day. Though England doesn’t have screen guidelines, two hours is the maximum amount for younger children in Canada

The study, in journal JAMA Pediatrics, states only 9.7 per cent of 14 year olds in the UK meet three recommendations, with more than three-quarters of teenagers spending more than two hours on screens daily.

England has no screen time guidelines, but in Canada less than two hours a day is recommended for younger children.

Furthermore, less than half of 14 year olds manage to achieve the recommended hour or more a day of moderate or vigorous physical activity. Researchers also found more than one in 10 children failed to get more than eight hours of sleep on a school night. 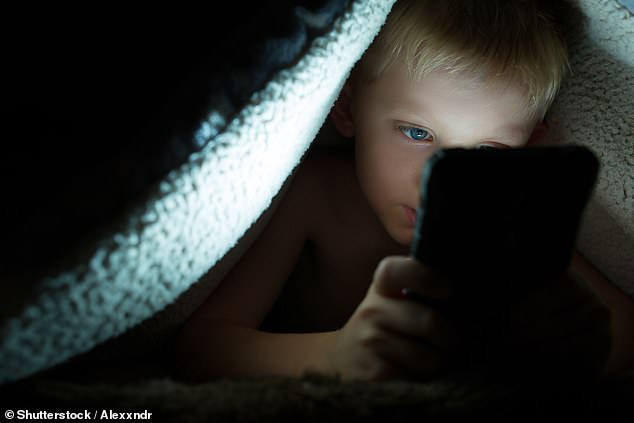 Only 40.5 per cent of children manage to get the amount of exercise recommended by the NHS. Children with depressive symptoms and obese boys were most likely to fail meeting requirements

Only 40.5 per cent get the amount of exercise the NHS recommends, although 89.3 per cent got more than eight hours of sleep. This has been linked to depressive symptoms, according to the Royal College of Paediatrics and Child Health, while evidence suggests it may also harm thinking skills.

Children with symptoms of depression and boys who were obese were least likely to meet the standards set.

The authors conclude: ‘The first step toward targeted intervention efforts is an understanding of the factors that are associated with engaging in multiple unhealthy behaviours.’