Nine-month-old twins have the worst case of hand, foot and mouth disease doctors have ever seen

Nine-month-old twins were left with the worst case of hand, foot and mouth disease doctors had ever seen after a ‘hushed up’ outbreak at their Spanish hotel.

Kimberley McCabe, 28, claims her twins Mila-Rose and Kyson broke out in painful red sores during a week-long holiday to the three-star Club Mac Hotel in Alcudia, Majorca, last month.

The mother-of-two, from Solihull, West Midlands, alleges neither the hotel nor the package holiday operator Jet2 warned her about the outbreak when she arrived.

Multiple guests became infected by the virus, which can be fatal, during her seven-day break, Ms McCabe claims.

Club Mac have confirmed 48 people have been infected with hand, foot and mouth disease since September 11.

This comes as the families of three other toddlers have claimed in the last week that their young children caught the virus from the same hotel.

The infection causes blisters and rashes, and is common among children under 10. It is not the same as foot and mouth, which affects animals.

Kimberley McCabe claims her nine-month-old twins Mila-Rose and Kyson were left with the worst case of hand, foot and mouth disease doctors had ever seen after a ‘hushed up’ outbreak at their Spanish hotel. They stayed at the three-star Club Mac Hotel in Alcudia, Majorca 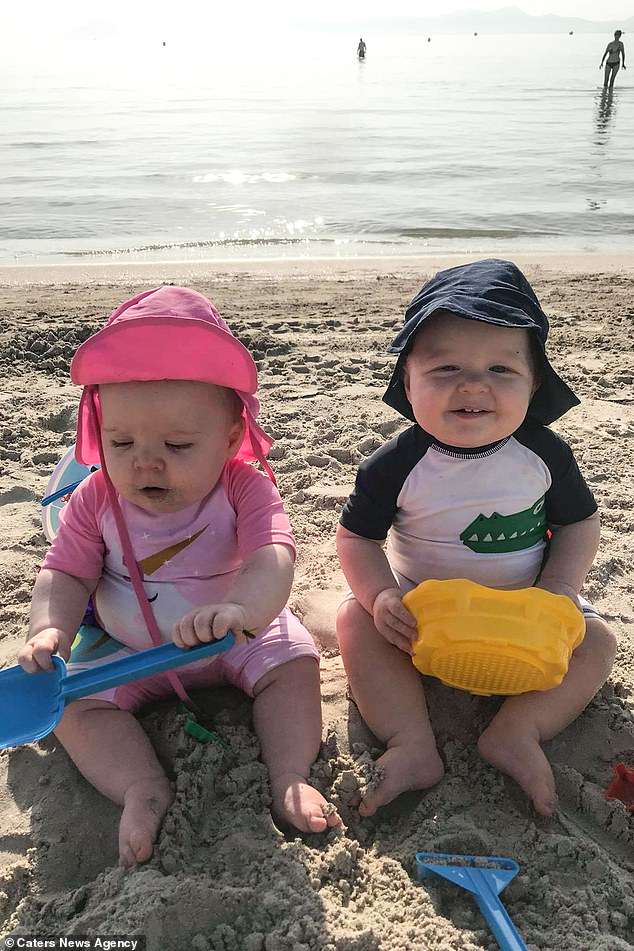 Pictured while on their week-long break, the twins were two of ‘hundreds’ of cases of the virus at the hotel, their mother claims. Ms McCabe adds ‘the hotel just tried to cover it up’ 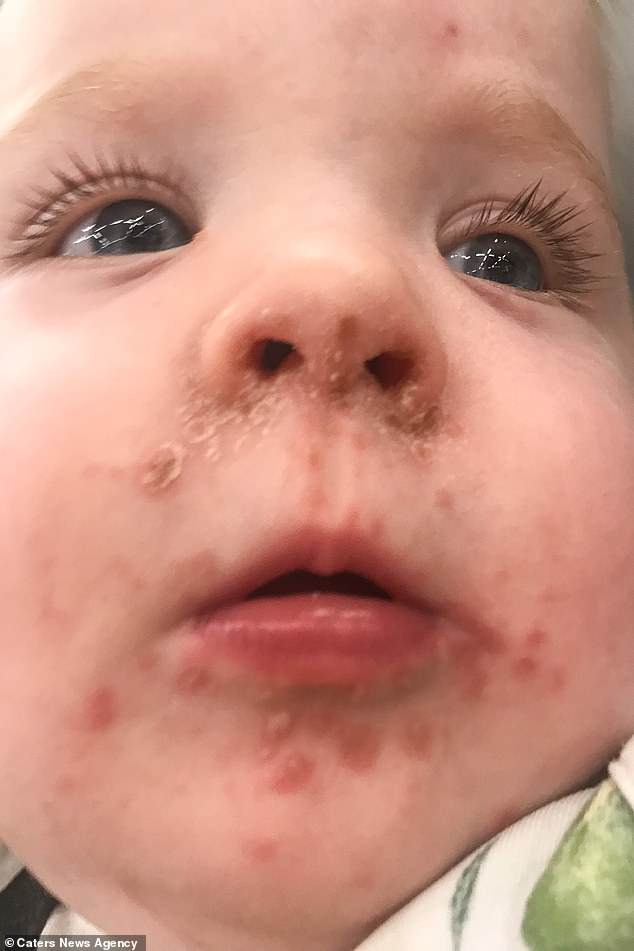 Ms McCabe claims their holiday was ruined when the twins (Mila-Rose Scott pictured) became ‘covered in red angry blisters from head-to-toe’. Rashes and blisters are the main symptoms

‘There were no signs warning us of the outbreak during check-in,’ Ms McCabe said.

‘There was a severe cause of hand, foot and mouth disease spreading, and the staff did their utmost to keep this information quiet.

‘My poor babies were covered in red angry blisters from head-to-toe, they were so poorly that it completely ruined our holiday.’

Ms McCabe, a hairdresser, was particularly concerned due to the twins being born four weeks premature and having weak immune systems.

‘When I approached our Jet2 rep, they said “we don’t want to scare our guests, that’s why we’re not telling them”.

‘There were no signs throughout the hotel, and we weren’t advised by staff at check-in or by Jet2 holidays before arriving.

‘We felt like there was no empathy at all, the hotel just tried to cover it up.’

‘They had a duty of care, but making money was clearly more important to them than the wellbeing of their guests.

‘We feel so let down – both the hotel and Jet2 have completely failed us and I’m disgusted at the way they’ve handled it.’

Ms McCabe adds she is yet to receive a valid explanation from the hotel as to why it chose to keep the outbreak a secret. 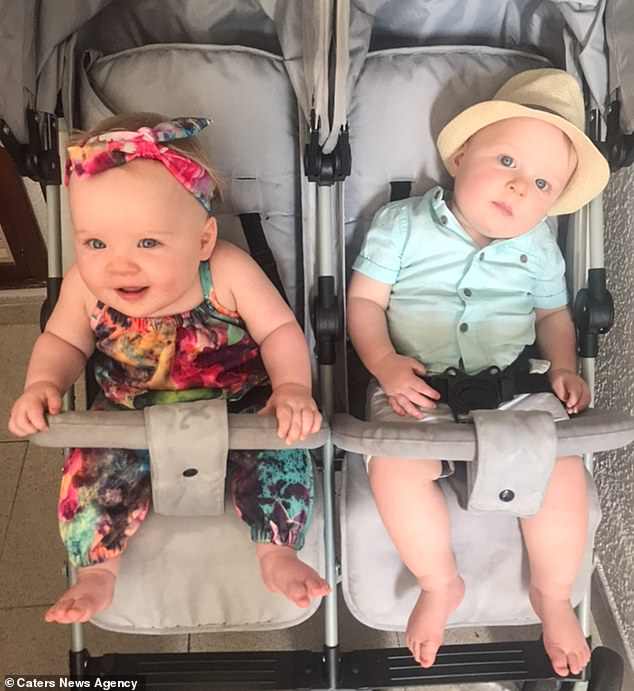 Although the virus is usually not serious, Ms McCabe worried the twins (pictured on holiday) would be hard hit due to them being born premature and having weak immune systems 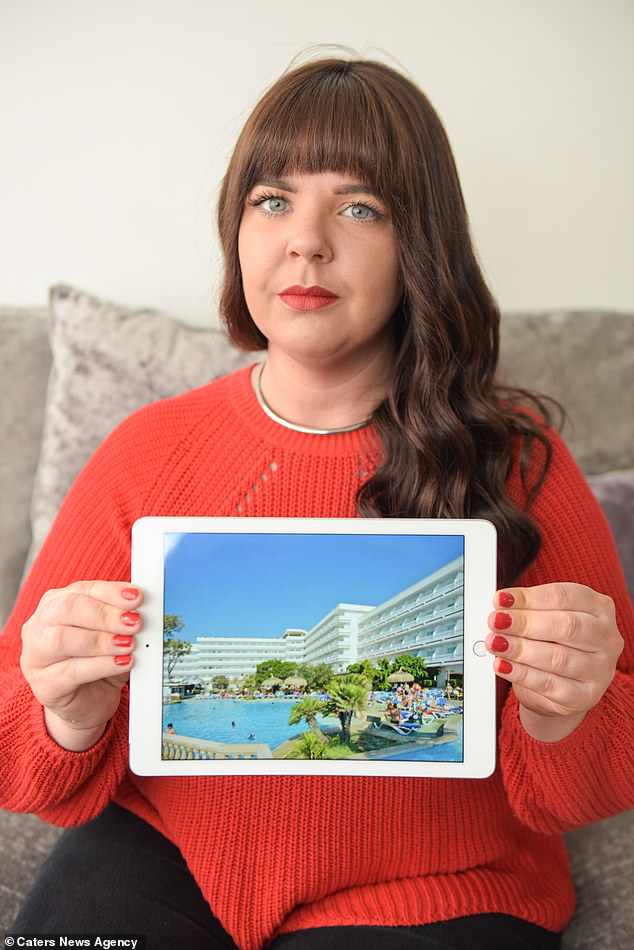 Ms McCabe (pictured with an image of the Club Mac Hotel) claims there were no signs up warning guests of the outbreak. ‘Making money was clearly more important to them’, she said

Ms McCabe claims there were multiple cases of the viral infection at the resort, with babies and children being the hardest hit.

She said: ‘When we went to see the hotel doctor, she even said, “oh, here’s another one!”

‘Several other guests had to leave early and ended up in hospital.

‘I don’t wish for any family, particularly those with young babies, to have to endure the ordeal we have.

‘There were also many pregnant women at the hotel, which is so concerning as the condition can be life-threatening for an unborn baby.’

Since posting about the ordeal on Facebook, Ms McCabe alleges she has received hundreds of messages about similar cases at the same hotel, with some dating back years. 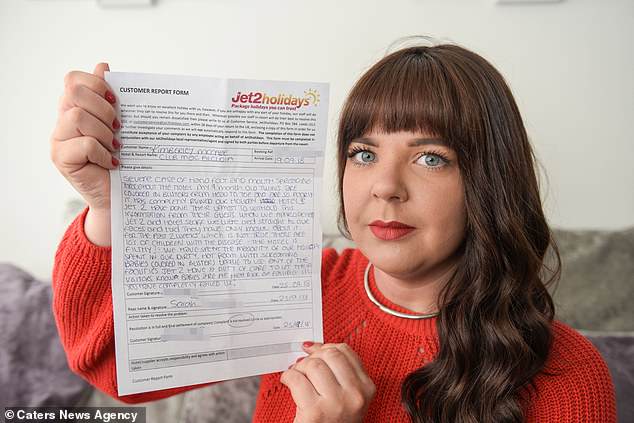 Ms McCabe (pictured with the complaint letter she has written to the hotel) claims a rep from the holiday provider Jet2 holidays told her ‘we don’t want to scare our guests, that’s why we’re not telling them’. She added: ‘Both the hotel and Jet2 have completely failed us’ 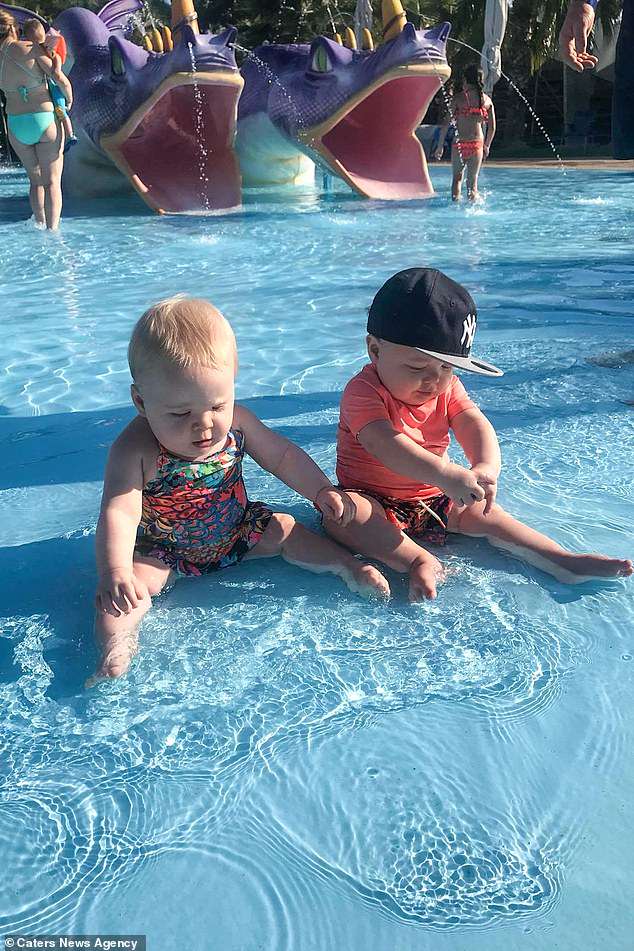 Pictured before being diagnosed by the hotel doctor, they were later banned from the pool

They returned home on September 26 after being declared fit to fly by the hotel’s doctor.

Once back in the UK, Ms McCabe claims a GP told her the twins’ cases were the worst they had ever seen.

She blames lack of cleanliness at the hotel for the outbreak.

After the youngsters were diagnosed by the hotel’s doctor, Ms McCabe was reportedly told to keep the twins in their room.

They were also banned from the restaurant and pool, she adds.

Hand, foot and mouth the disease is passed on through coughs and sneezes. According to the NHS, a person is infectious days before any symptoms become apparent. 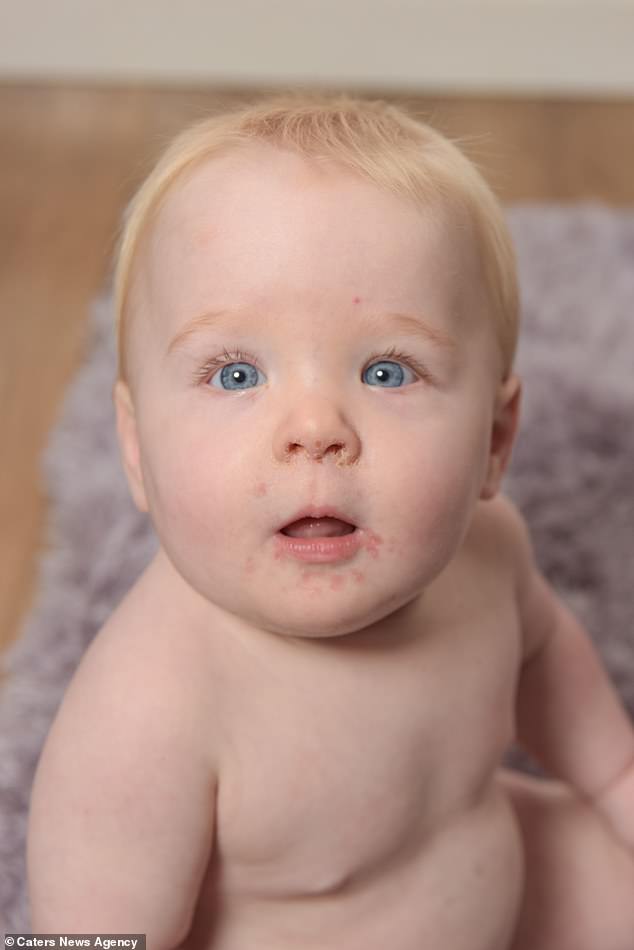 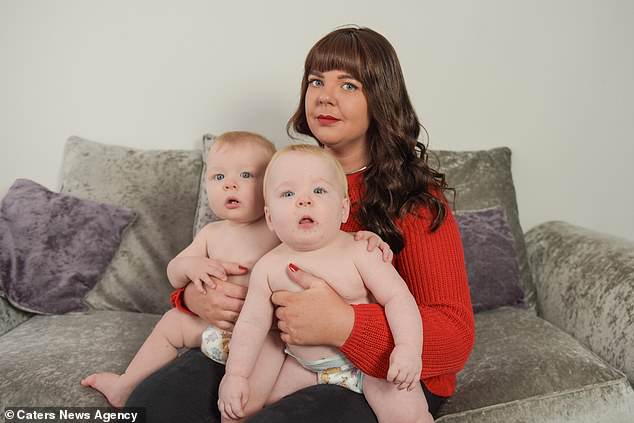 Once back in the UK, Ms McCabe claims a GP told her the twins’ cases were the worst they had ever seen. She blames the lack of cleanliness at the hotel for the outbreak 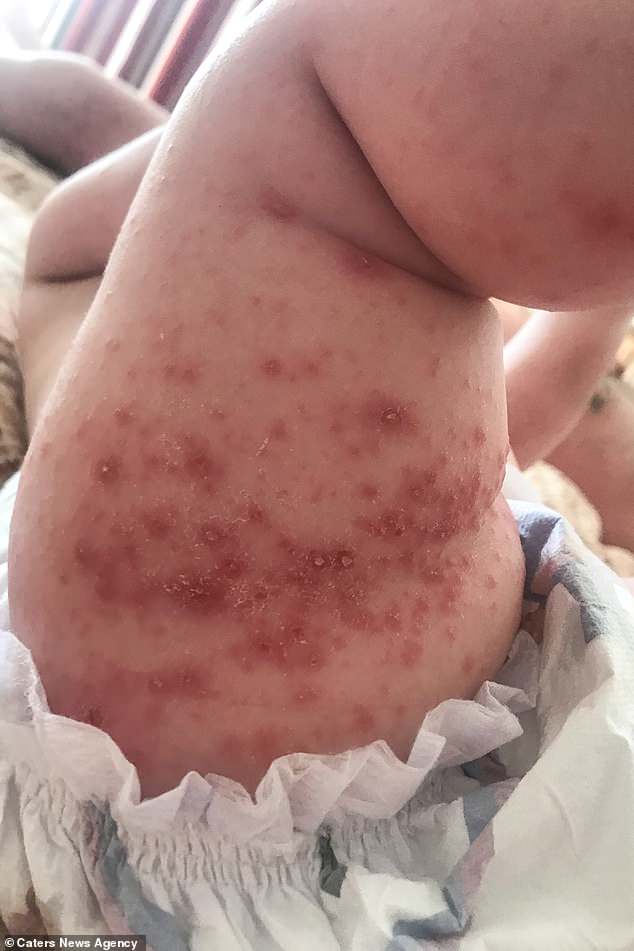 Mila-Rose Scott also developed an itchy, painful rash on her legs and buttocks

This comes after Emilia Marchant started to develop symptoms on the plane home to the UK after staying at the same hotel, according to her mother Davina.

WHAT IS HAND, FOOT AND MOUTH DISEASE?

Hand, foot and mouth disease (HFMD) is a viral infection that causes lesions to form on a sufferer’s hands, feet and mouth.

It can also affect the buttocks and genitals.

The condition is not related to foot and mouth disease in animals.

HFMD is usually not serious and does not require treatment, however, it can cause secondary infections if skin is scratched.

It is most common in children under 10, with outbreaks occurring at nurseries and schools.

How can it be spread?

Treatment focuses on adequate fluid intake, a soft diet and painkillers, if necessary.

Ms Marchant also claims there were no signs up at the hotel warning parents of the outbreak.

‘If I hadn’t searched hand, foot and mouth and seen all the articles on Majorca I still would be wondering how on earth she had got it,’ she told The Sun.

Their mother Danielle said: ‘I know getting this disease is very possible but I just don’t get why we were not warned.

Dr Sarah Jarvis, GP and clinical director of patient.info, said it was ‘absolutely’ possible the disease had spread to other locations on the Spanish island.

She said: ‘Unfortunately kids can stay infectious for several weeks so if they’ve been to the beach they can spread it to other kids.

‘I get it at the clinic in the UK all the time, if you think about how it spreads, it’s almost inevitable.’

The Foreign Office does not mention ongoing cases of hand, foot and mouth disease in its travel advice.

A spokesperson for Jet2 said last week: ‘We are aware of a small number of cases of hand, foot and mouth at the Club Mac Hotel in Alcudia which, contrary to some reports, first appeared at the hotel in September.

‘Since the appearance of these cases, we have briefed our team on how to spot and prevent the spread of the illness and displayed posters on notice boards in the hotel. 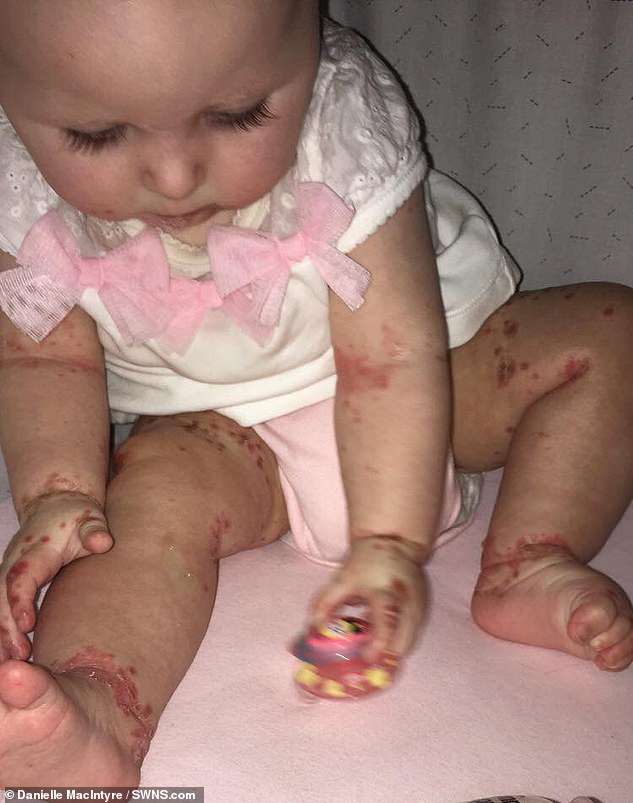 Danielle MacIntyre said her five-month-old daughter Milla (pictured) broke out in a rash when she got home to Glasgow. She and her sister Nevah were diagnosed with hand, foot and mouth 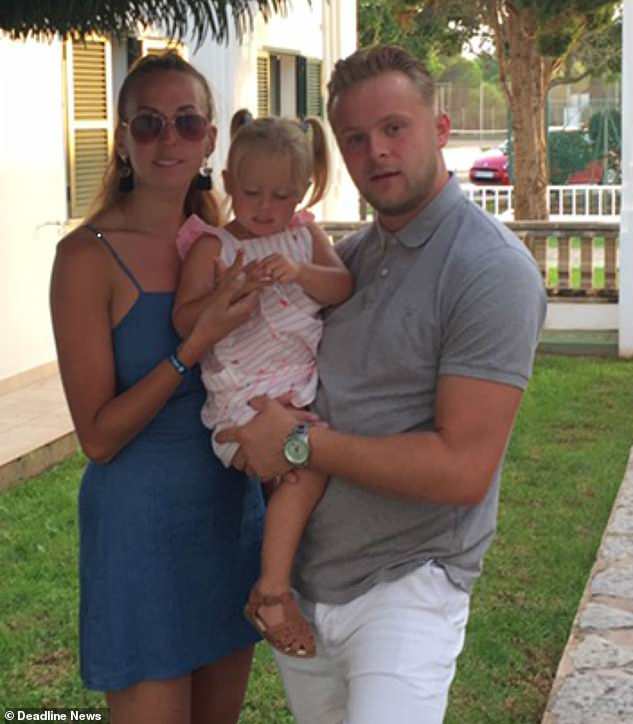 Vicente Giménez, general manager at Club Mac Hotel Alcudia, added: ‘We are aware of a small number of cases of hand-foot-and-mouth at the Club Mac Hotel in Alcudia and we’re working with our resort teams and customers to do everything possible to reduce the spread of this highly contagious viral infection.

’48 people have been confirmed with the infection since 11 September.

‘In September we have had over 12,000 guests staying at Club Mac, with 0.4 per cent of them having the hand foot and mouth virus.

‘We have activated POSI (Prevention of the Spread of infection) procedures and cleaning and disinfection is being carried out throughout the complex, by all departments, in collaboration with our on-site H&S consultant from external experts Preverisk.’

They added: ‘We care about our customers and take the health, safety and wellbeing of our guests seriously.

‘We have also been made aware of publicised outbreaks of this highly contagious virus in other hotels on the island, as well as in Menorca, the United States, Australia and Malaysia.

‘Therefore, we don’t know where this illness actually began, but we can’t rule out the possibility that some people could have been infected in airports, as this outbreak is obviously extremely widespread.’