The nine-year-old Georgia girl who was seen in dramatic surveillance video getting struck by a hit and-run driver is speaking out to thank God and her supporters for her miraculous survival.

LaDerihanna Holmes sat down with NBC Nightly News correspondent Kerry Sanders Thursday for an exclusive interview to talk about the heart-stopping accident that nearly cost the child her life last week.

The grade-schooler from Lithonia, Georgia, sustained a skull fracture with laceration and a broken pelvic bone in three places as a result of the accident that took place on Friday and was recorded on video. 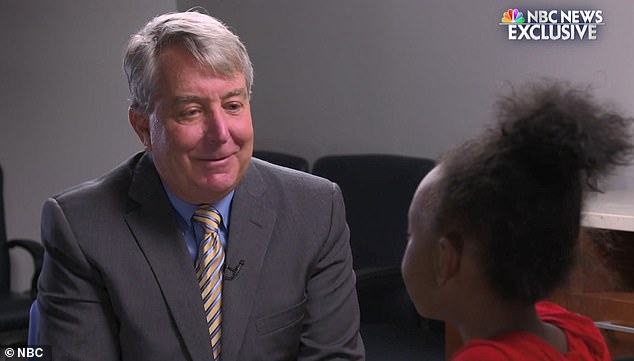 On Tuesday, the suspect in the crash, 28-year-old Gabriel Fordham, turned himself in but claimed that he was fighting off an armed carjacker inside the car when he slammed into LaDerihanna as she was playing with a friend in her family’s yard.

Sporting a red T-shirt and sparkly lip gloss, LaDerihanna told NBC’s Sanders of her lucky escape: ‘we do thank god a lot for miracles that happen.’

Sanders noted that LaDerihanna is a miracle herself.

When asked about her goals, the little girl replied: ‘my goal is to get better with the help of everybody in the world.’ 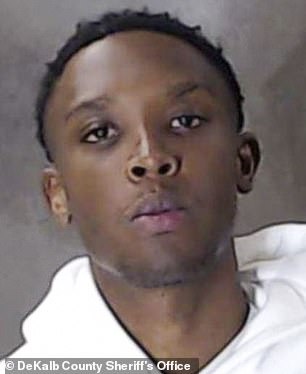 Gabriel Fordham turned himself in on Tuesday but claims he was fighting off an armed carjacker when the incident occurred. He has since been charged with failure to maintain lane, failure to stop at a stop sign, reckless driving, hit and run and serious injury by vehicle

LaDerihanna was previously described by her mother to NBC News as a straight-A student who loves school, reading and cheerleading.

‘Will we see you out there cheerleading soon?’ Sanders inquired of LaDerihanna, to which she replied with confidence: ‘Most definitely.’

LaDerihanna was outside her home in Lithonia with another girl around 7pm on Friday when the car careered straight toward them.

Distressing video shows the second girl running off in one direction after looking back and seeing the oncoming vehicle.

LaDerihanna runs in the other direction, but the black sedan blows past a stop sign and jumps the curb before running her over and slamming into her home. 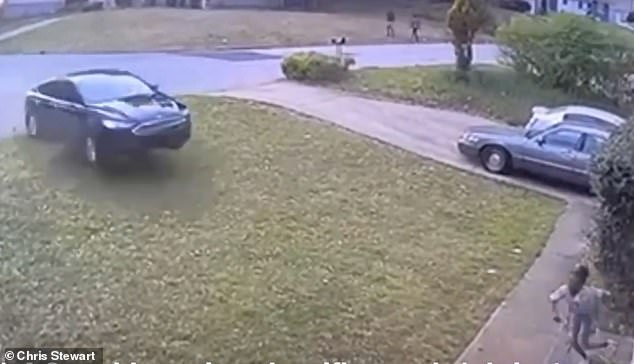 Surveillance footage captured one of the two suspects fleeing from the scene, exiting from the car’s passenger side and running across the front lawn as LaDerihanna’s family rushed over to help her.

Fordham has since been charged with failure to maintain lane, failure to stop at a stop sign, reckless driving, hit and run and serious injury by vehicle. 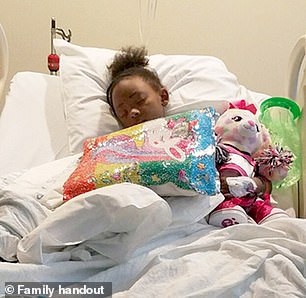 His attorney says he is ‘apologetic and he wants to help this family get closure to this issue’.

The lawyer, Ryan Williams, also said: ‘Someone jumped in his vehicle with a pistol, put the gun to his face, made him drive, and the whole time my client was driving, he was kind of directing the path.’

LaDerihanna was taken to the hospital in critical condition with a leaking heart valve, according to the family’s GoFundMe page.

Chris Stewart’s, the family’s lawyer, said it is a miracle she survived.

‘There is no explanation on how my client is alive,’ he wrote on social media. ‘I sat with her and can’t believe me eyes. Though her road to health will be long, she’s alive.’ 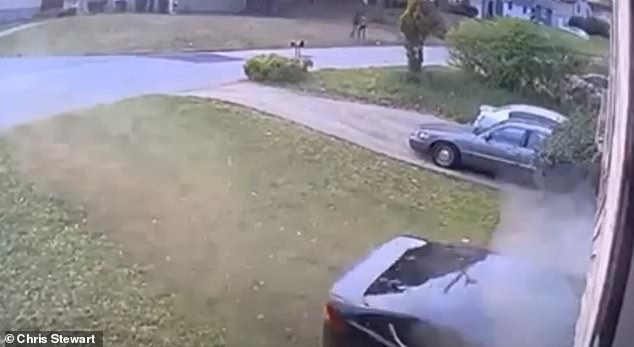 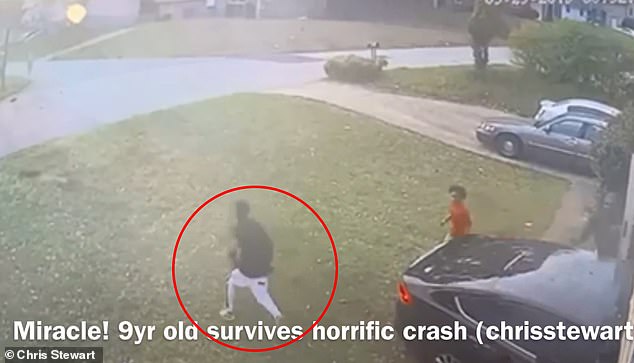 Surveillance footage captured one of the two suspects fleeing from the scene, exiting from the car’s passenger side and running across the front lawn

The other girl who was playing in the front lawn with LaDerihanna was not seriously injured.

Authorities had said that the owner of the vehicle told investigators she was at work at the time of the crash and had given the car to her boyfriend.

The suspect and his girlfriend are since said to have contacted police following the crash and have been negotiating a surrender ever since.

In the shocking clip the person in the white pants is the the robber who attacked Fordham, his attorney claims.

Williams added: ‘My client tried to take the gun from him, the guy hits him in the face, my client blacks out, and that’s why you see the full fledge force of them going through a stop sign.’

Fordham only fled the scene when he saw someone come out of the house with a gun and making threats, Williams argues.

He said: ‘With emotions rising, he had no opportunity to stay there, without possibly being harmed. He has not been trying to hide in the shadows.’ 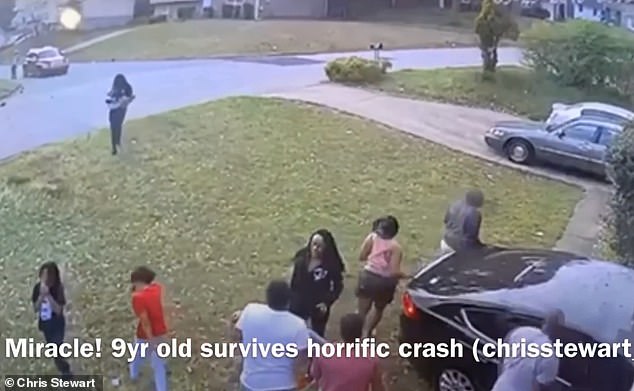 Charlette Bolton, LaDerihanna’s mother, had issued a plea directly to the driver.

‘You know what you did. You didn’t try to help my baby,’ she said. ‘You almost killed my baby and I hope you do the right thing and turn yourself in.’

Bolton said she is trying to stay ‘strong’ for her daughter. 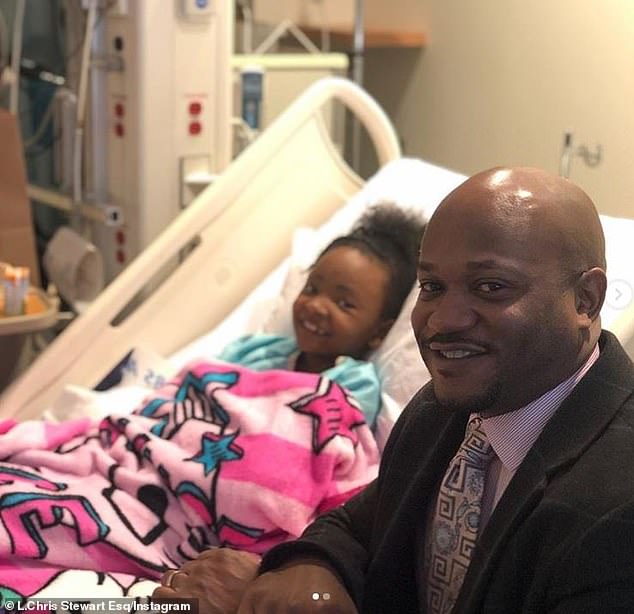 Chris Stewart’s, the family’s attorney, posted a photo of LaDerihanna smiling with him from her hospital bed on Monday morning 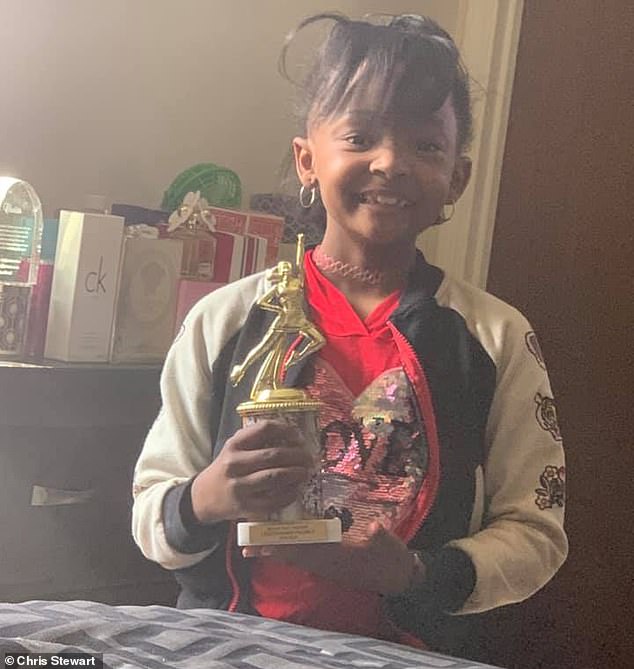 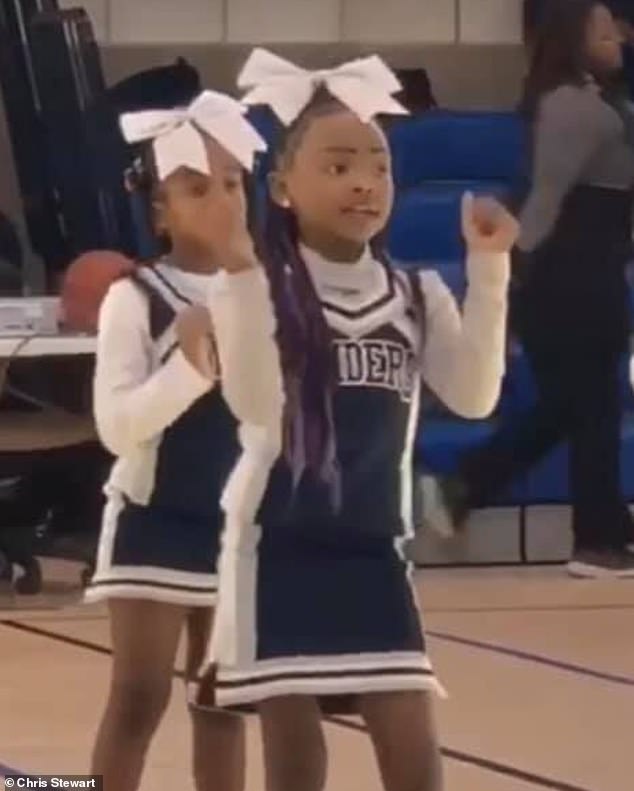 Charlette Bolton, LaDerihanna’s mother,issued a plea directly to the driver. ‘You know what you did. You didn’t try to help my baby,’ she said

‘She’s strong, and I know she’ll bounce back from this. It’s just going to take awhile.’

Stewart said footage of the horrific crash is proof that miracles do exist.

‘I was shocked,’ he said. ‘I deal with wrongful death all the time, and I cannot believe she survived it. When I went to see her in the room, she does not have a mark on her face.’

‘The video is really hard to watch, but she survived somehow. You gotta believe in God after seeing this.’ 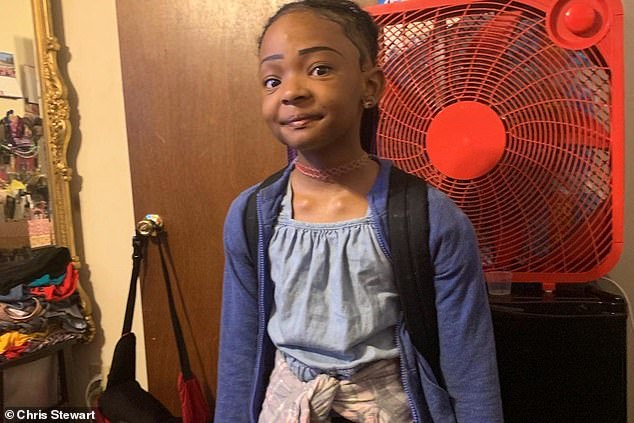 Chris Stewart’s, the family’s lawyer, said it is a miracle LaDerihanna survived the crash