Nine-year-old schoolgirl lands 400lb bluefin tuna that is worth £70,000

She really is going to need a bigger boat! Nine-year-old schoolgirl lands 400lb bluefin tuna worth £70,000 (but has to throw it back)

A girl of nine has landed a monster bluefin tuna more than five times her own weight and worth £70,000.

Izzy Crotty battled with the 400lb fish that was so strong she had to attach her rod to the boat to stop herself getting pulled in.

The schoolgirl spent 30 minutes reeling in the huge specimen with the help of her father, John, 20 miles off the coast of Plymouth, Devon.

Catch of the day: Izzy Crotty, 9, landed a 400lb bluefin tuna off the coast of Plymouth, Devon

Bluefin tuna is a highly-sought after delicacy in Japan where it has been known to sell for £175 per pound.

That would have made Izzy’s fish worth a staggering £70,000.

But it is illegal in the UK to kill the protected fish, which was once an endangered species, and so Izzy was happy to let it go.

Under a new Government initiative, anglers are allowed to catch bluefin tuna and tag them for scientific purposes before releasing them.

Izzy was onboard a charter boat called Fortuna, which is one of 25 vessels permitted to take part in the tagging scheme, known as CHART, that was introduced last year.

It gives anglers a three-month window from August to November to experience the ‘once-in-a-lifetime’ thrill of catching big game fish they would otherwise have to travel to the Caribbean for.

Since bluefin tuna became protected, the waters off the south-west coast of England have seen a resurgence in the monster big game species and it is now regarded as a ‘world class’ fishery for them.

Izzy’s father, John, a farmer from Crediton, Devon, said they ‘gawped’ when they saw the size of the fish.

The 35-year-old father of three said: ‘It was only Izzy’s second outing and this was the first fish. 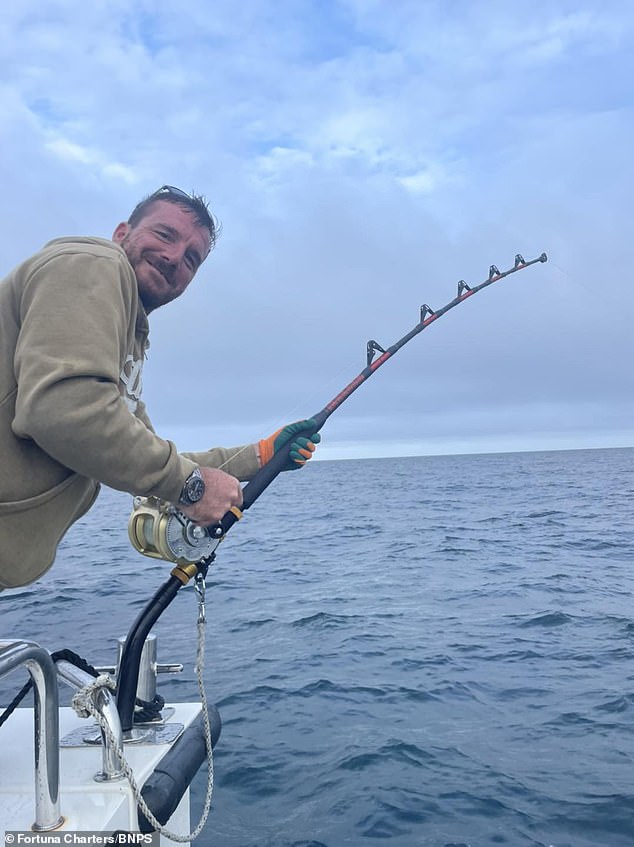 ‘We were around 20 miles out. Izzy was all geared up and ready to go with the rod holder.

‘The fish started off pretty slow then it started to run. It took around half-an-hour for us to get it alongside the boat.

‘We couldn’t believe how big it was. Izzy was excited, but exhausted. She slept well that night.

Mark Jury, owner and operator of Fortuna Charters, added: ‘It was amazing watching a nine-year-old catch a fish five times the size of her.

‘Izzy is going to be one hell of a fisherwoman. She gave it a great effort and used all her strength to wind in the monster.’