Ten people are thought to have died in an outbreak of the deadly Nipah virus in India.

Five people are confirmed to have died from the disease, which is carried by fruit bats, and tests are being done on a further five suspected victims, Indian health officials said today.

The incurable virus can be caught from pigs or by people eating fruit or drinking palm wine contaminated by infected bats. It can also be transmitted between people.

Officials are warning people about eating fruit they find outdoors, and mangoes bitten by bats were found in the home of three family members who died.

Nipah has killed more than 260 people in Malaysia, Bangladesh and India in the past 20 years, according to the World Health Organization.

The first known outbreak, in Malaysia in 1998, killed more than 100 people after they contracted the disease from infected pigs.

Health authorities across the state are on high alert and have set up medical camps and a control room to tackle the emerging situation.

More than 90 people have been quarantined and nine hospitalised in an outbreak of the Nipah virus, which kills 70 per cent of people who become infected 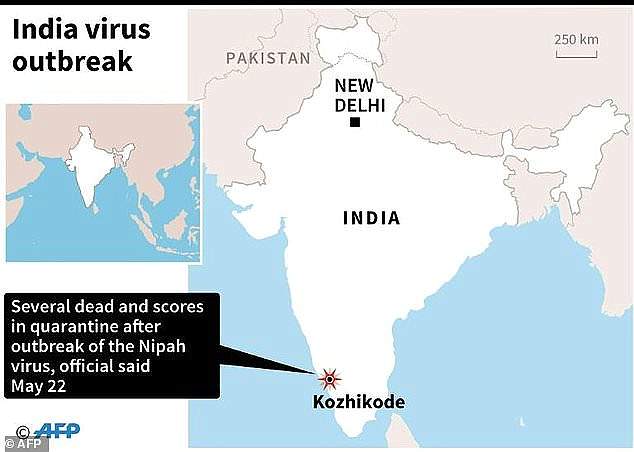 The new outbreak is happening in the state of Kerala in southwest India – previous cases have largely been confined to the north-west of the country. Three members of the same family died in Kozhikode (pictured), and bitten mangoes and dead fruit bats were found in a well in their home

More than 90 people are in quarantine, nine have been admitted to hospital and more are suspected to have been killed by the virus.

Nipah virus is fatal in 70 per cent of cases – it causes flu-like symptoms and fever which can progress to swelling in the brain and coma.

Lini Puthussery, 31, a nursing assistant and mother-of-two, has been called ‘heroic’ by authorities after she died after treating an infected patient.

Her body was cremated quickly, before her family had a chance to visit, because of fears of the virus spreading. 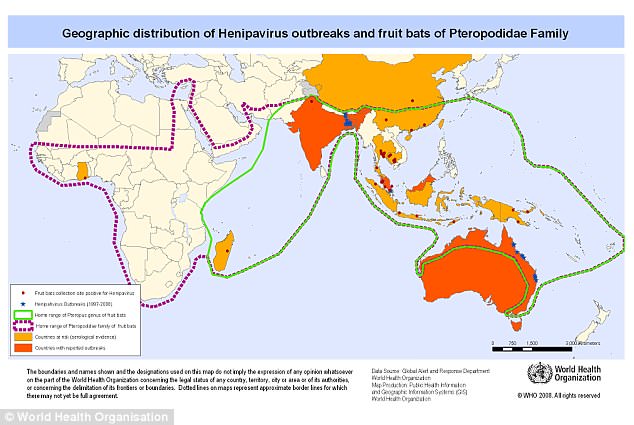 The Nipah virus was first discovered in 1998 during an outbreak in Malaysia, and outbreaks have since happened in Singapore, Bangladesh, India and Australia.

In a heart-rending final note Ms Puthussery left for her husband she said: ‘I don’t think I will be able to see you again. Sorry. Please take care of our children.’

This is the first time there has been an outbreak in Karala, a state in southwest India, but there have been past outbreaks elsewhere in the country and in Malaysia and Bangladesh.

Despite media reports that ten people have died, officials told AFP final tests had not been completed on more than five deaths.

Nine people have been admitted to hospital with symptoms resembling the virus, and one of the nine has tested positive for Nipah.

Nipah an ‘urgent threat to humanity’

The Nipah virus was named by the World Health Organization as one of the ten viruses which pose the most urgent threat to humanity, and are likely to cause an epidemic.

The WHO is calling for more research into the lethal virus, for which there is currently no vaccine.

People are advised to prevent infection by avoiding infected people or animals, and not drinking date palm sap or palm wine stored openly near palm trees. They should also be cautious about eating fruit found outdoors. 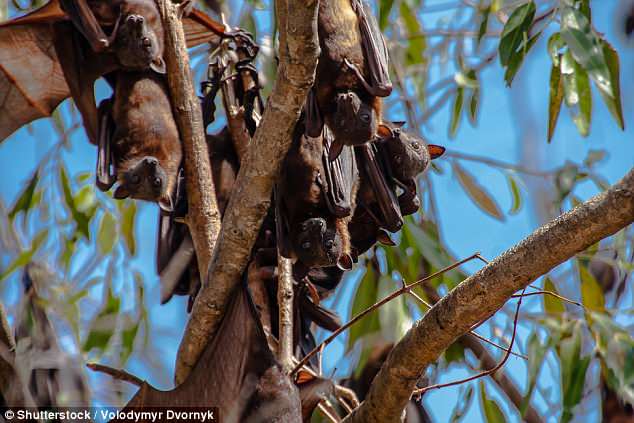 Fruit bats are thought to be the primary host of the disease, and to pass it on to pigs, fruit and tree sap, which can then infect people

Three members of the same family have died of the virus.

Bitten mangoes and dead bats were found in a well in their home in the Kozhikode district, about 750 miles south of Mumbai.

‘Health staff are visiting individual households giving them specific instructions including about eating fruits from outside and other precautions,’ he said.

The neighbouring state of Tamil Nadu has stepped up surveillance in border districts, fearing the spread of Nipah.

The virus was first identified during an outbreak in Malaysia in 1998, when over 100 people were reported to have died and one million pigs had to be put down.

WHAT IS THE NIPAH VIRUS?

The Nipah virus (NiV) is a type of henipavirus, which are naturally held in fruit bats.

The virus can cause illness in pigs and humans, and can be spread to humans from animals, infected food and other people with the virus.

Symptoms may appear between five and 14 days after becoming infected, and can last up to two weeks.

They include: fever, headache, drowsiness, disorientation and mental confusion.

Symptoms may progress to a coma, and some patients have breathing problems.

The virus is thought to be fatal in around 70 per cent of cases.

There is no vaccine or cure, but patients may receive supportive treatment to relieve symptoms.

Nipah virus infection can be prevented by avoiding exposure to sick pigs and bats in endemic areas and not drinking raw date palm sap.

That outbreak spread to Singapore, and there have since been human cases in Bangladesh, India and Australia.

No cure for the coma-causing virus

Nipah virus symptoms – which can include fever, headache, drowsiness and confusion – usually appear between five and 14 days after contracting the virus and may last for two weeks.

However, in serious cases people can progress into a coma within 24 hours of symptoms starting, and some people have breathing problems.

There is no treatment for the virus so people receive supportive care to try to relieve their symptoms.

Research should be fast-tracked, WHO says

Earlier this year, the Nipah virus was included in a list of pathogens for which the WHO says research should be fast-tracked.

It was named as one of ten killer viruses that pose the most ‘urgent’ threat to humanity, as revealed by concerned experts.

Ebola and Zika, which both have caused brutal pandemics in the past four years, were named amid fears they could strike again.

For the first time ever, ‘Disease X’ – representing a pathogen currently unknown to scientists – was mentioned by the WHO.

Crimean Congo haemorrhagic fever, which kills 40 per cent of those it strikes and was recently spotted in Uganda, made its way onto the list.

Officials are also concerned about Marburg virus, considered to be one of the most deadly pathogens in existence. It also rocked the African nation in November.