Four people were gunned down, one fatally, on Thursday in California as fans celebrated the life of rapper Nipsey Hussle following his shooting death at 33 last month.

The victims aged between 30 and 50 were three black males and a woman who was also black, LAPD stated as they said about the South LA incident around 103rd and Main streets: ‘We must stop this senseless violence.’

Cops said the suspects were in a gray Hyundai as a procession moved through the South LA area around 6.25pm on the day of his memorial event at Downtown LA’s Staples Center.

The incident occurred about a 15 minute drive away from late music star’s Marathon clothing store where he was killed in March. 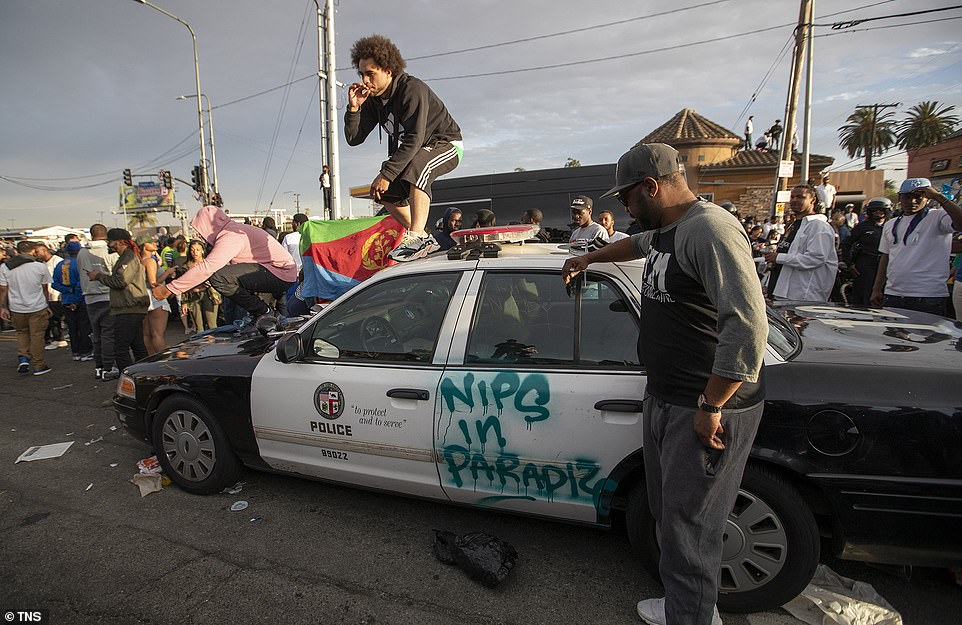 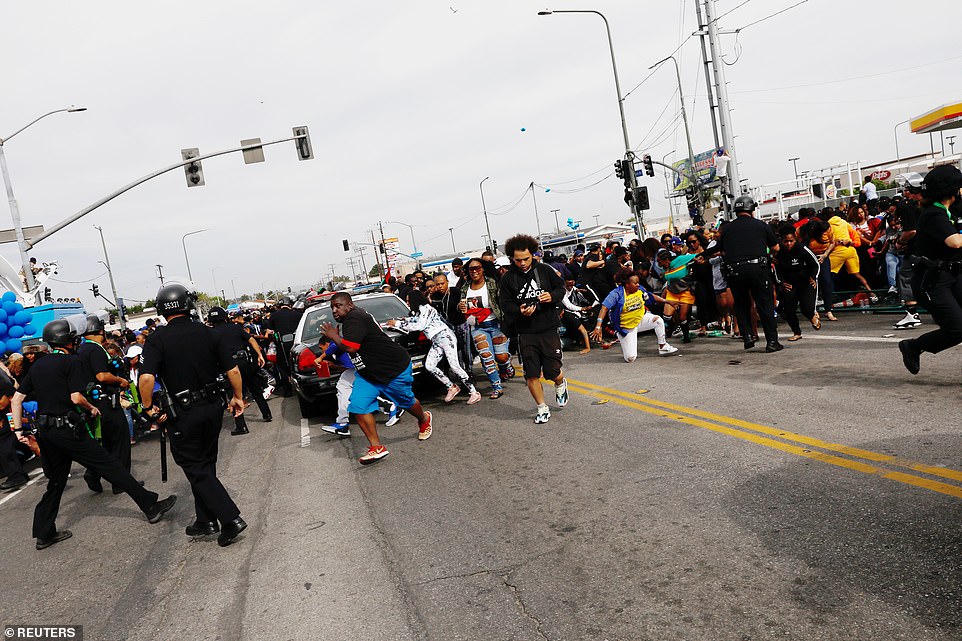 People run away from a stampede as LAPD officers reopen a path for the funeral procession after fans filled the intersection while waiting for the procession, following a memorial for rapper Nipsey Hussle, near the intersection of Slauson Avenue and Crenshaw Blvd in Los Angeles 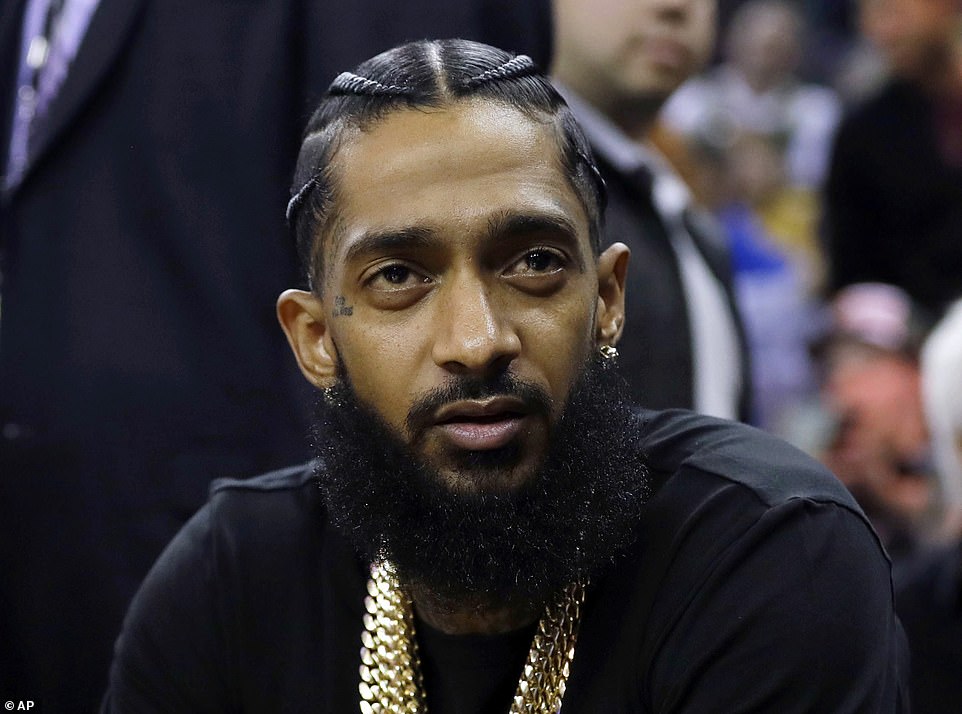 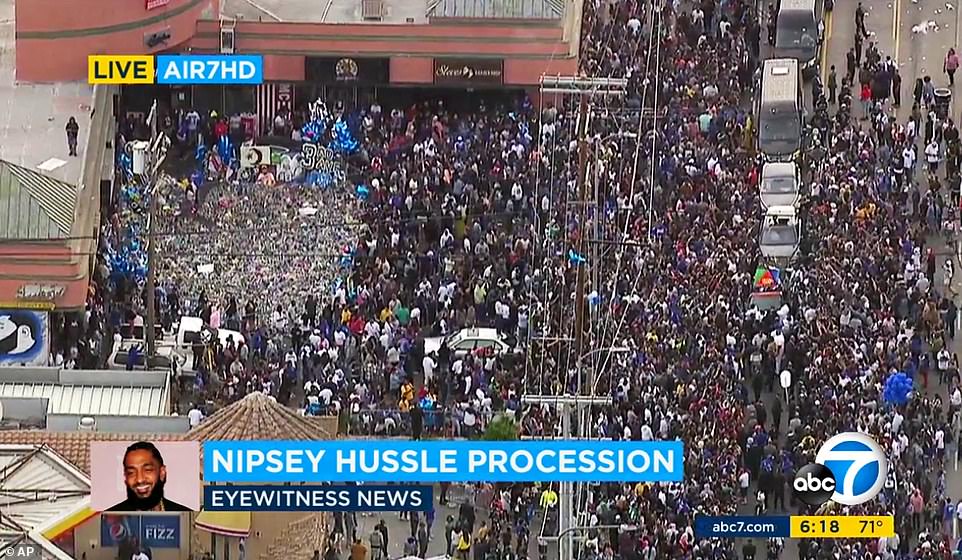 Staples Center is a mere 10-minute car journey from the Thursday shootings.

There’s no indication the incident was connected to Nipsey Hussle’s procession but LAPD Chief Moore said it occurred ‘in the midst of this procession’.

LA Times reported it was after tens of thousands had left the Watts neighborhood where they moved in remembrance of the man whose real name was Ermias Joseph Asghedom.

After the memorial, a hearse with Hussle’s body slowly snaked along a 25-mile route through the city. The car was draped in multicolored flowers and followed by a parade of police motorcycles and private citizens on bikes and ATVs, some of them doing wheelies. 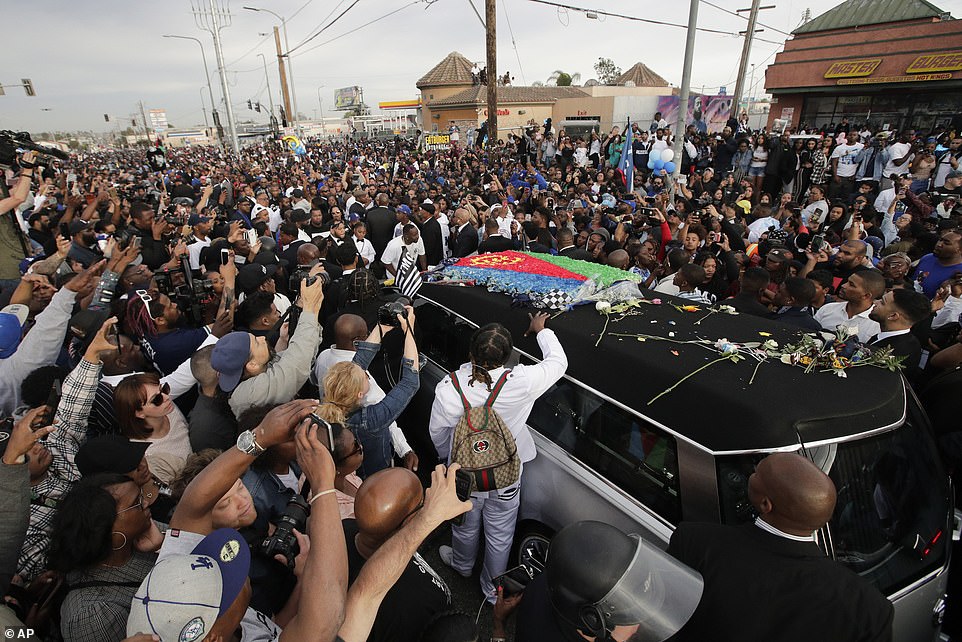 A hearse carrying the casket draped in the flag of his father’s native country, Eritrea in East Africa, passes through the crowd 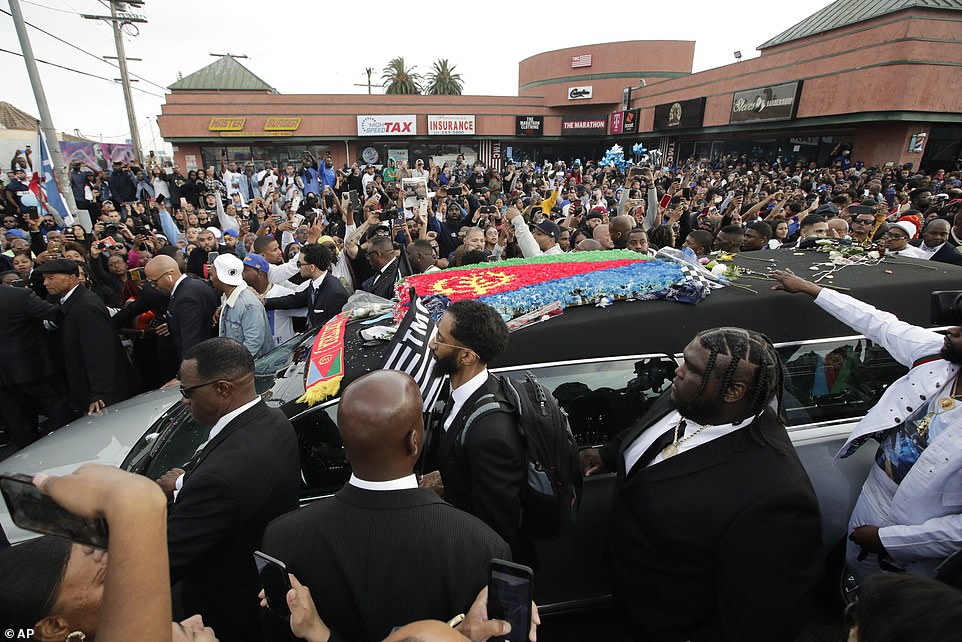 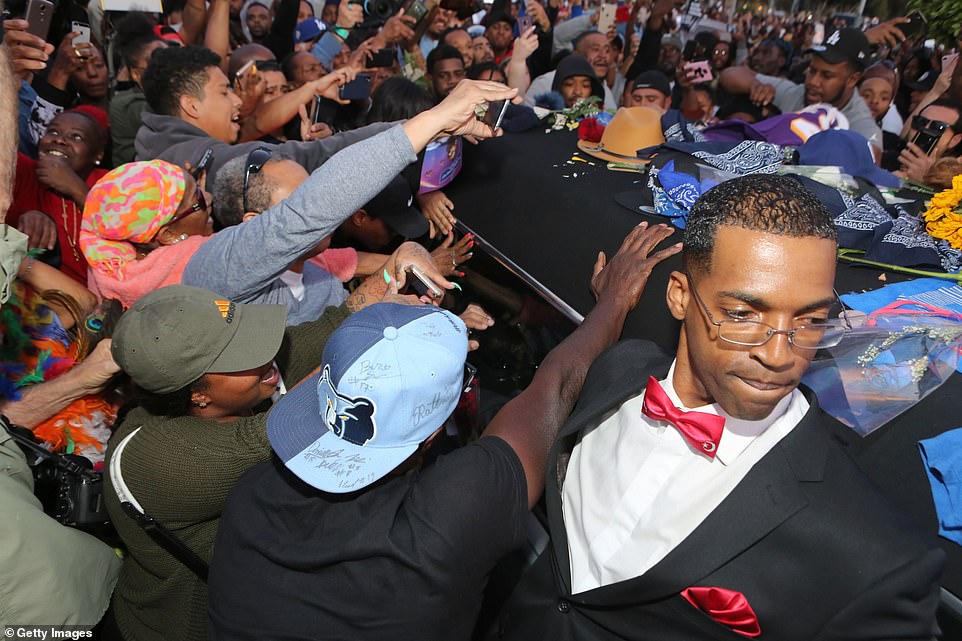 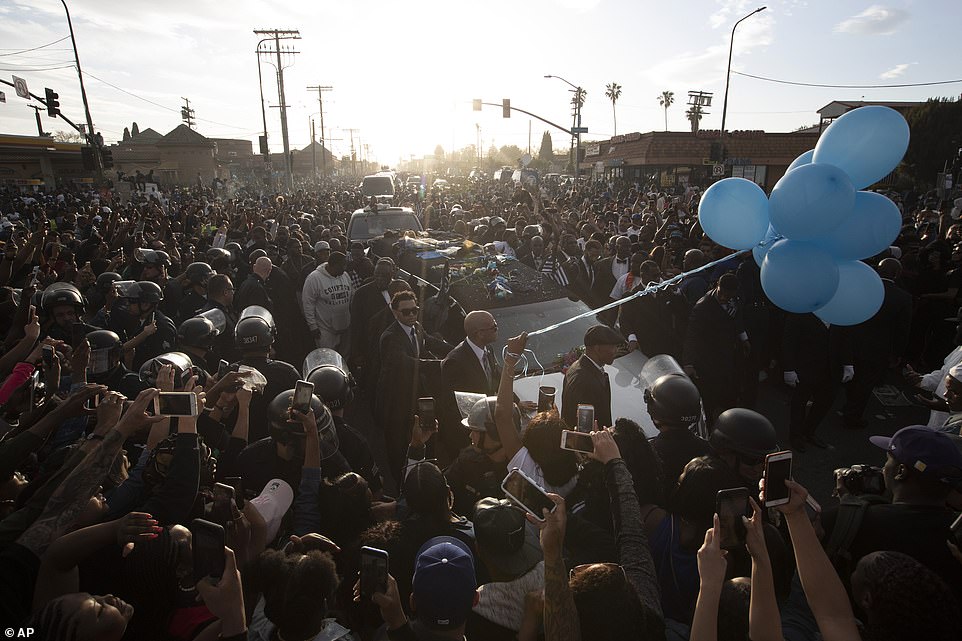 A huge crowd thronged the streets and sidewalks at Slauson Avenue and Crenshaw Boulevard where the procession paused at The Marathon, Hussle’s clothing store that he had hoped would become a community hub. He was gunned down as he stood outside the store March 31.

Onlookers got inventive in their efforts to get a look, or a smartphone shot, of the hearse carrying Hussle’s body, with some climbing traffic lights or heading to rooftops to get a better view.

At least a dozen people were seen standing atop an empty Los Angeles police car with ‘NIPS IN PARADISE’ spray-painted on its side.

At one point people ran away from a stampede as LAPD officers reopened a path for the funeral procession after fans filled the intersection while waiting for it to arrive.

A woman was pictured on the floor after a barrier fell. 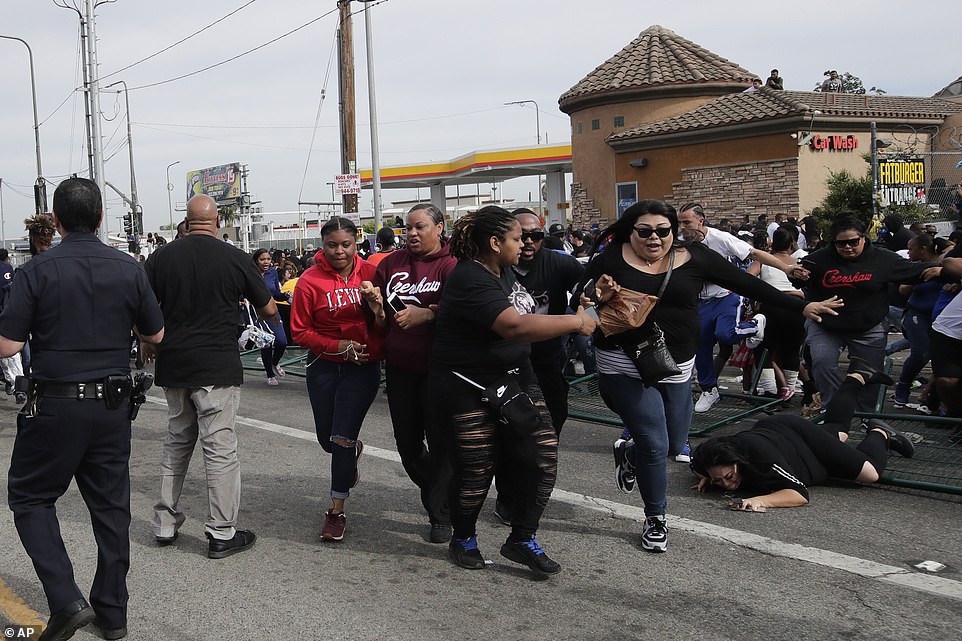 People flee the scene after hearing a loud noise while waiting for a hearse. A woman is pictured on the floor after a barrier fell 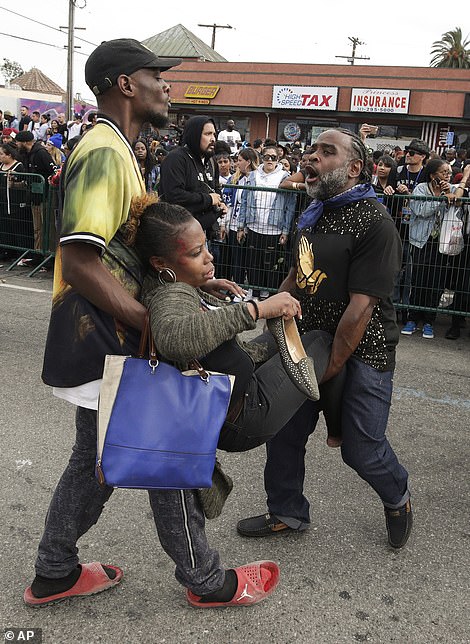 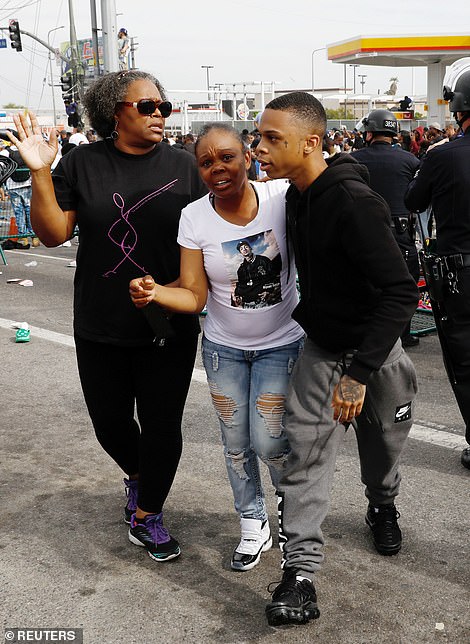 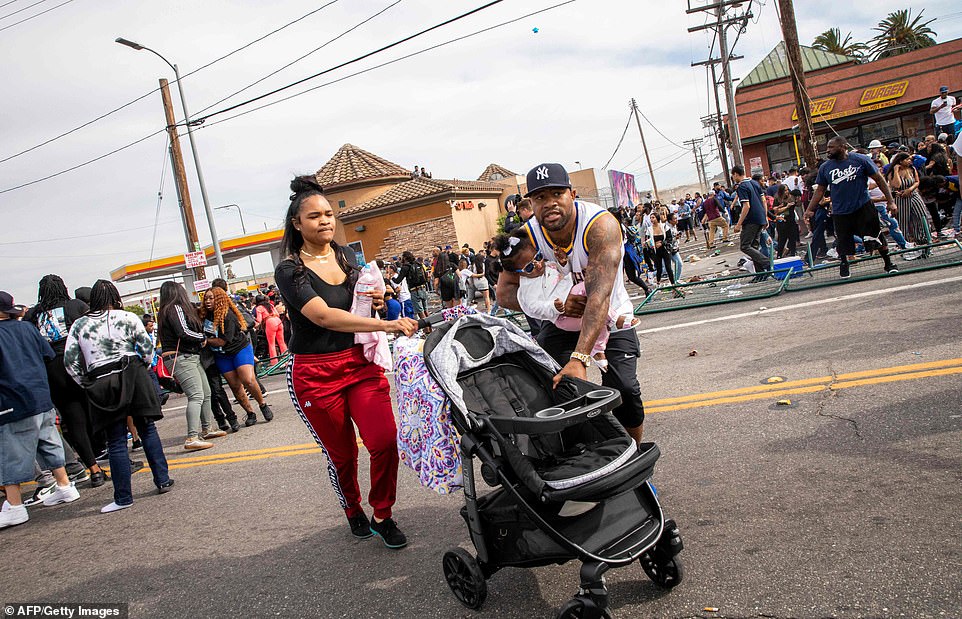 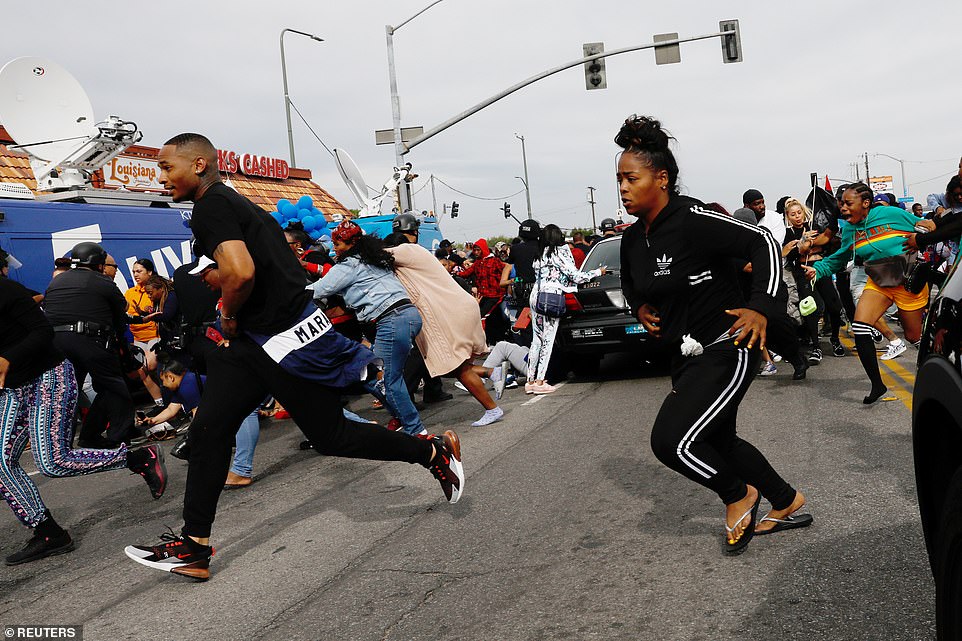 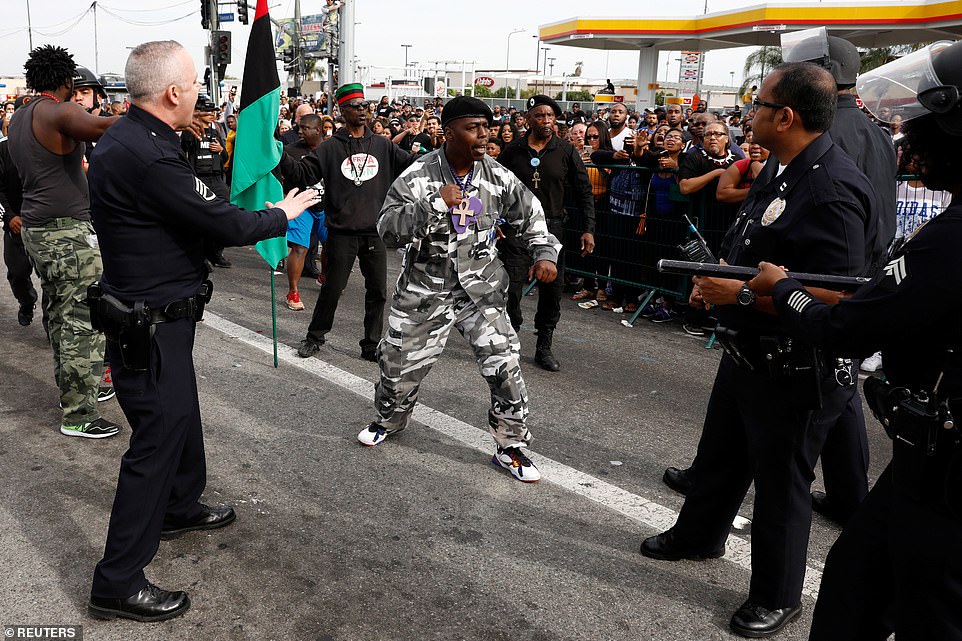 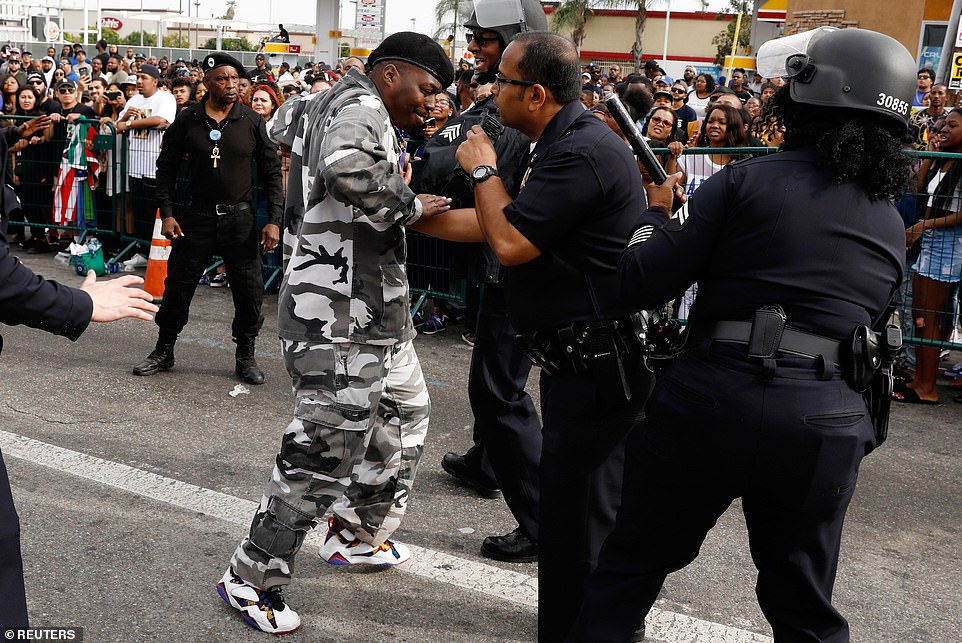 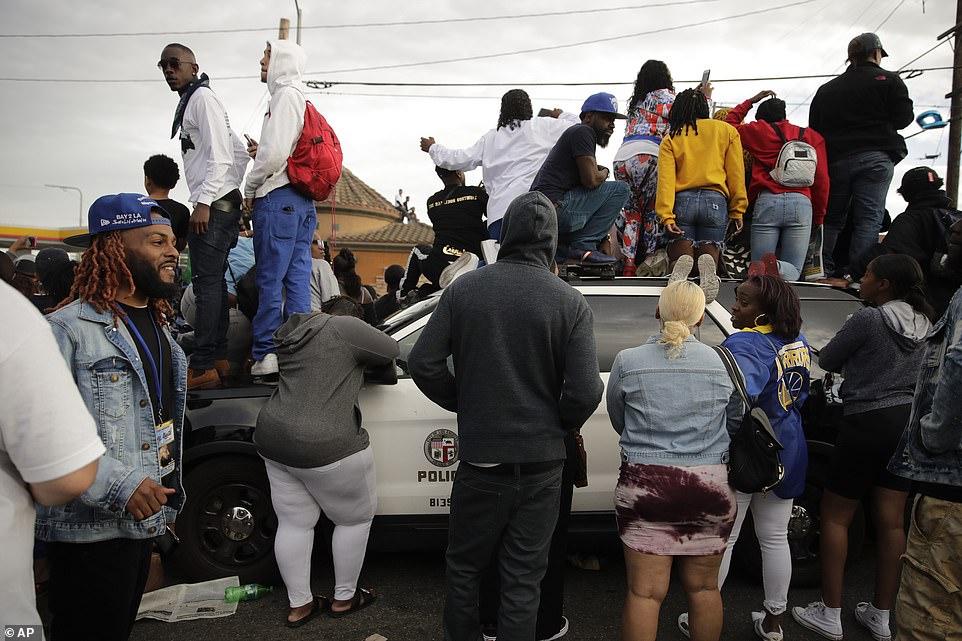 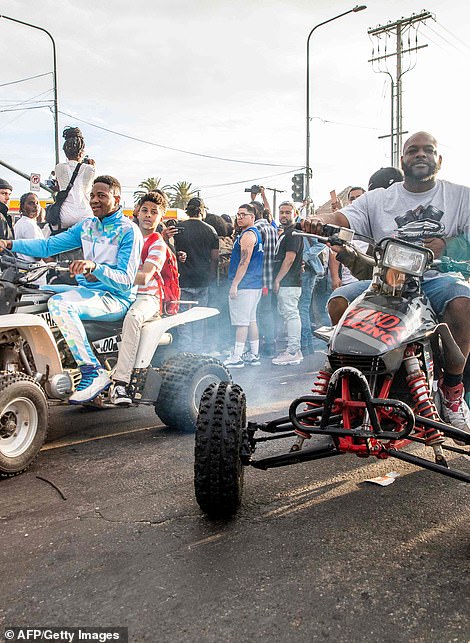 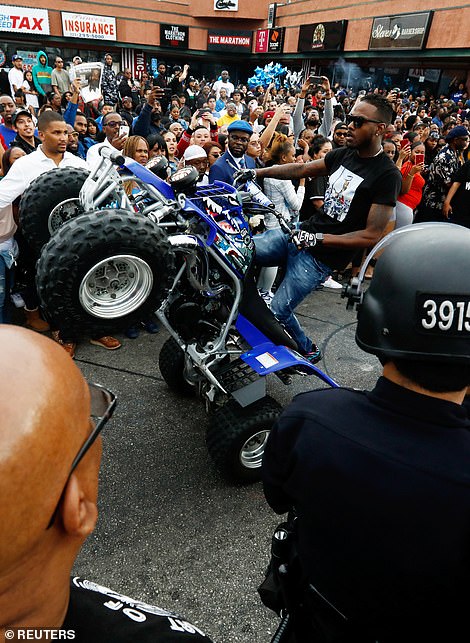 Some Hussle fans traveled hundreds of miles to be at the memorial.

Hundreds who could not get tickets stood outside, there just to be part of the scene, where activists with microphones shouted about the systemic problems Hussle’s death represents and others just danced to his music as it blasted out of their phone.

Several news helicopters hovered over the arena to capture the scene, where for several blocks in every direction, vendors sold T-shirts and bandanas made for the occasion. 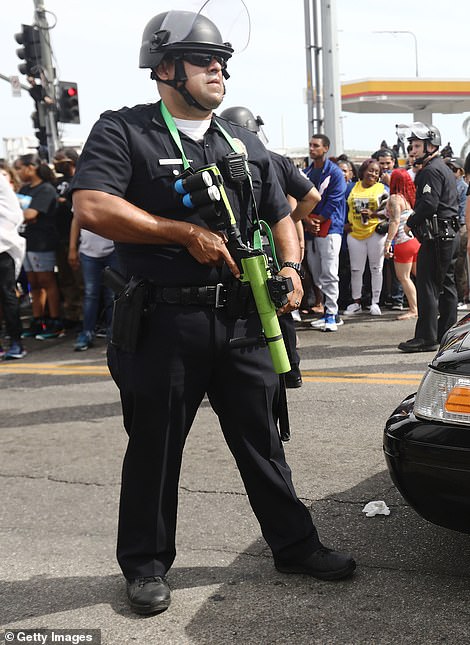 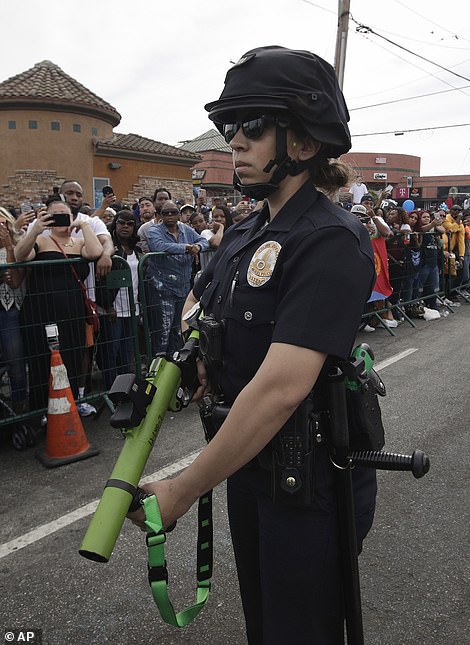 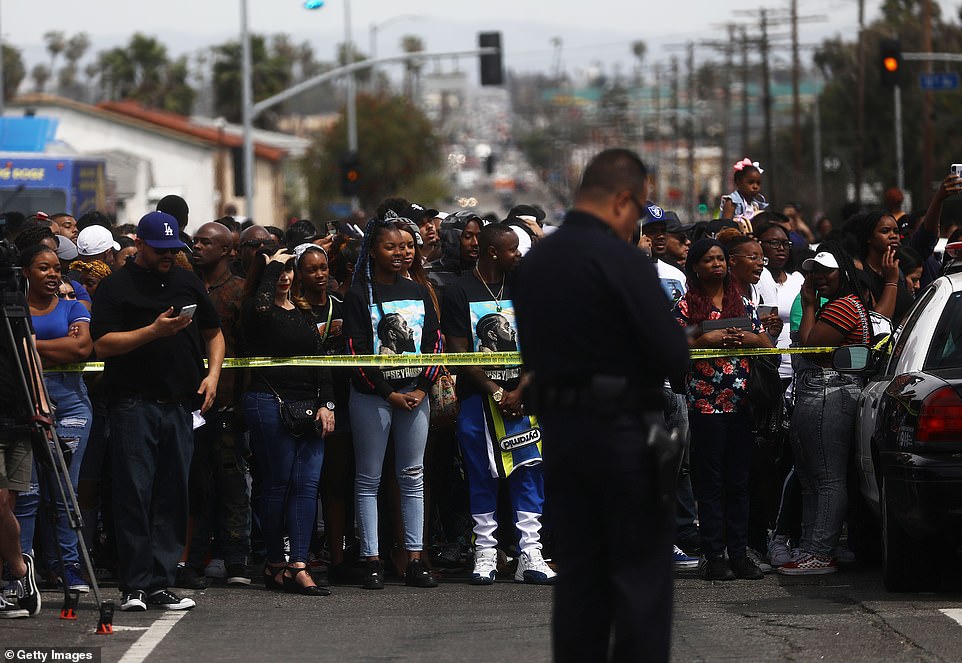 People wait for the funeral procession for hip hop artist Nipsey Hussle outside his store on April 11, 2019 in Los Angeles 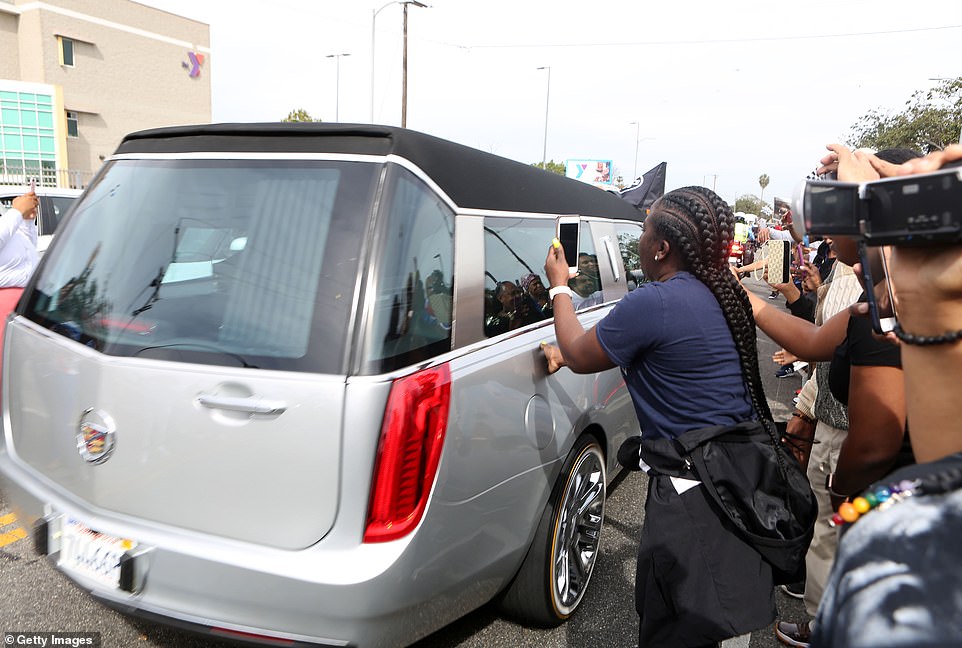 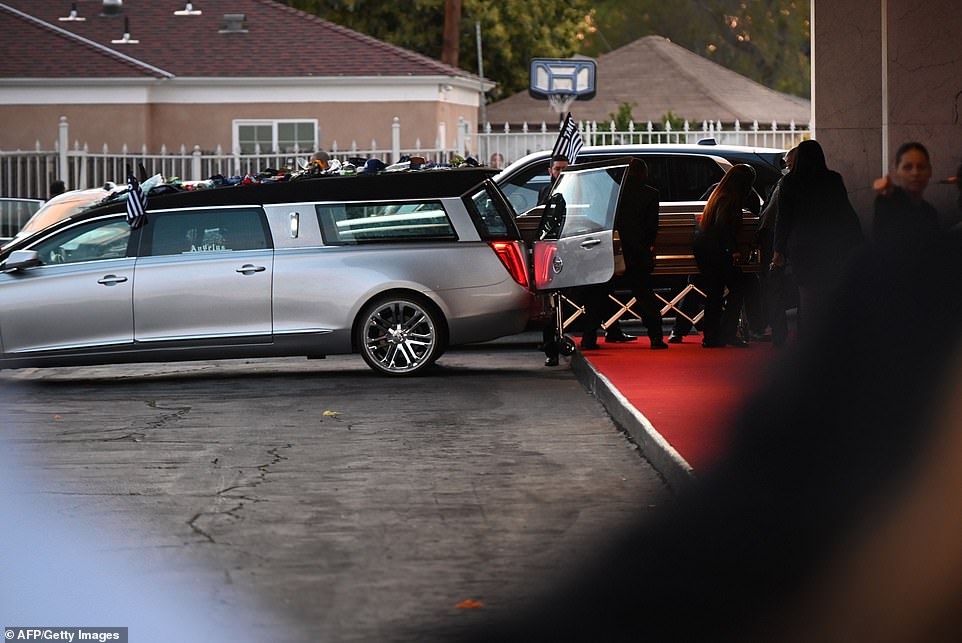 Nipsey Hussle arrives in his casket at a funeral home on Crenshaw Boulevard in Los Angeles, California