Lawyers for the former jet-setting executive immediately said they would file a bail application, but have acknowledged that he will probably be detained until a trial.

Ghosn denies any wrongdoing and argued in a dramatic first court appearance on Tuesday that he has been ‘wrongly accused and unfairly detained.’

He was already facing a first charge for allegedly under-reporting his compensation over five years to the tune of five billion yen ($46 million) in official documents to shareholders.

The second charge against him alleges that the under-reporting continued for another three years.

The third charge, for aggravated breach of trust, involves a complex alleged scheme under which Ghosn is said to have tried to transfer losses on foreign exchange contracts to Nissan’s books.

It also alleges that he used company funds to repay a Saudi acquaintance who put up collateral for the contracts.

The breach of trust charge is regarded as particularly serious, and Ghosn’s lawyer admitted Tuesday that his client was unlikely to secure bail if prosecutors pressed the charge formally.

It would be ‘very difficult,’ said Motonari Otsuru. 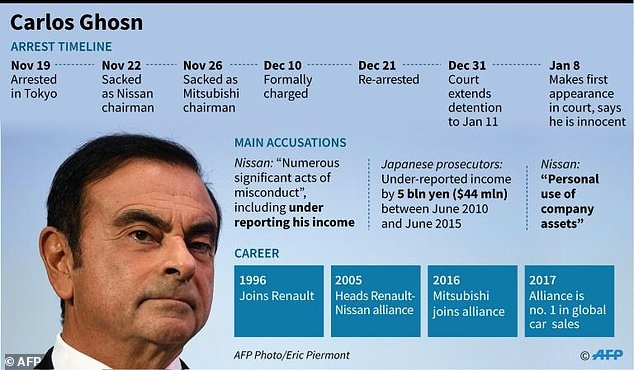 ‘In general in such cases in Japan, it is indeed the case that bail is not approved before the first trial does take place,’ he said, adding that it could be six months before the case comes before a judge.

Ghosn has appeared in public just once since his shock November 19 arrest, during the Tuesday court hearing called after his lawyers requested judges explain the tycoon’s ongoing detention.

One of the most recognisable foreign executives in Japan, Ghosn was led into Tokyo District Court in handcuffs and with a rope around his waist and was noticeably thinner.

He spoke in a strong voice and passionately declared a ‘genuine love and appreciation for Nissan’, saying he had acted ‘honourably, legally and with the knowledge and approval of the appropriate executives inside the company’.

The judge said his ongoing detention was justified because he poses a flight risk and could tamper with evidence if released. 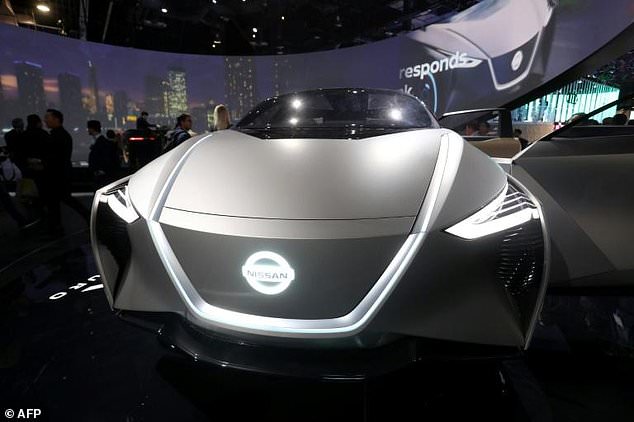 His lawyers nonetheless filed a bid to end his detention, but the request, and an appeal, were both rejected.

The twists and turns since Ghosn’s arrest have riveted Japan and the business world and the case is also being played out in local media, with another string of allegations leaking in the Japanese press Friday.

Ghosn’s prolonged detention has put the spotlight on Japan’s justice system, which has come in for some international criticism.

With each allegation against Ghosn, prosecutors can seek up to 22 days of detention to investigate the claims — the period for the aggravated breach of trust allegation expired Friday.

And with each formal charge, prosecutors can hold Ghosn for two months of pre-trial detention, which is renewable. 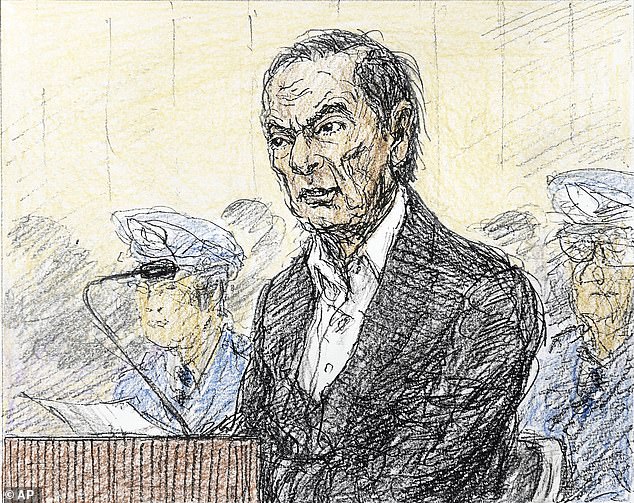 Ghosn, 64, wore a dark suit and, having lost more than 40lbs on a rice-based prison diet, looked significantly thinner and with greying hair as he appeared in Tokyo District Court this week

The jet-setting high-flyer who once sparked criticism for his lavish lifestyle has gone from spacious digs in international capitals to a one-man cell.

He was initially held in a small room with traditional Japanese tatami floor mats to sleep on, but has now been moved to a larger cell with a Western-style bed.

He has reportedly complained about the rice-based diet at the detention centre, with his family saying he has lost up to 20 kilos (44 pounds).

This week he suffered a fever that prompted prosecutors to suspend their interrogations, though his lawyer said Friday that Ghosn’s temperature had gone back down.

The arrest of the 64-year-old has exposed rifts in the alliance he forged and led between Nissan, Mitsubishi Motors and France’s Renault.

While the two Japanese firms quickly ousted him from leadership roles, Renault has kept him on and its board said Thursday that an ongoing audit has found no sign of fraud in the last two years.