Do you ever have those anxious dreams where you’re running hopelessly late for an exam you actually sat decades ago? Or that you’re speaking on stage and suddenly realise you’re stark naked? Or turn up late to your own wedding?

I do — but I never expected one of those nightmares to come true.

Last weekend, I was on my way to a literary festival to speak about my first book, Why We Get The Wrong Politicians.

As I left my home in south Cumbria and headed for Wigtown, in Dumfries and Galloway, in my little electric car, I was buzzing with excitement.

I’d prepared my talk, packed a smart outfit and even allowed myself seven hours for the four-hour drive so I’d be sure to arrive in good time.

But in the event I ended up sprinting in at 5.45 pm, 45 minutes late, out of breath and praying that at least a few members of the audience had hung on to hear me.

The cause of this hugely embarrassing delay? My Nissan Leaf, an electric vehicle marketed as an ‘eco-dream’ but which in reality proved rather different.

I bought the car last summer for £25,000 (that’s including the Government’s electric vehicle or EV discount — road tax is ‘free’) and I love driving it. Electric vehicles are a far smoother ride than those with internal combustion engines. Most importantly, they don’t emit toxic fumes. 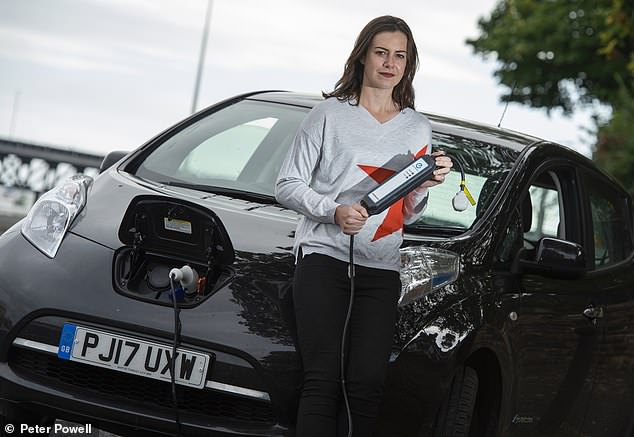 My Nissan Leaf, an electric vehicle marketed as an ‘eco-dream’ but which in reality proved rather different

I’m a keen cyclist and have become very aware of the soup of polluted air making its way into my lungs every day as I pedal to work. I wanted to do my own small thing to help change that, so an electric car seemed to make sense.

What makes less sense, however, is how the power-charging network for electric cars operates in this country. It’s a bit like having an iPhone on wheels: you’re constantly worrying whether the battery is going to run out and so always on the lookout for a socket to plug into.

With a top speed of 90 mph, the range of my car is about 160 miles but this reduces quickly if I’m on a motorway, driving uphill or the weather is cold.

I’m lucky enough to have an outdoor socket in my back garden, so I can charge up at home. But if I’m on a long journey, I need to stop and top up the battery.

Once on the road, I am then reliant on the charging network, which is often unreliable and sparse or non-existent in rural areas.

A few years ago, presenter Jeremy Clarkson reviewed the Nissan Leaf on BBC’s Top Gear. The car ran out of power while he was driving in Lincolnshire, and he discovered the county had no recharging points at that time.

In any case, the ‘refuelling’ process could take 13 hours, which meant the journey from London to Lincoln would have taken longer than a stagecoach in the 18th century! 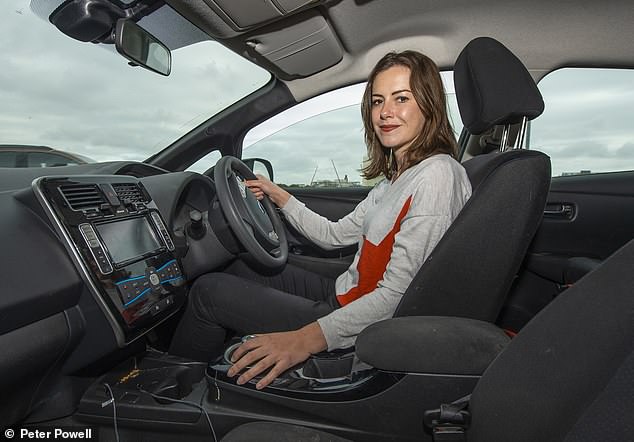 Nissan was furious and said the Top Gear test was unfair. It claimed Clarkson had set out with the batteries only partially charged — and that he had driven aimlessly round and round in Lincoln until, inevitably, the car spluttered to a halt (the BBC denied it had misled viewers).

It’s true that the technology has improved greatly since then, but for today’s electric car owners needing to top up their charge or recharge, the best hope is either a motorway service station or a local authority car park.

To complicate matters, charging points are run by different companies. I have four apps on my phone and carry a radio-frequency identification (RFID) card that help me find and access power sources in different places, then debit my account (it costs about £8 for a full charge).

That’s fine if, once I’ve logged in, the power supply is actually working. But last weekend it wasn’t. I’d stopped at Todhills Services in Cumbria to top up but found that the charge point was offline.

Fortunately, I had enough power left to reach the next service station, at Gretna — only to find on arrival that neither of its charge points was working. 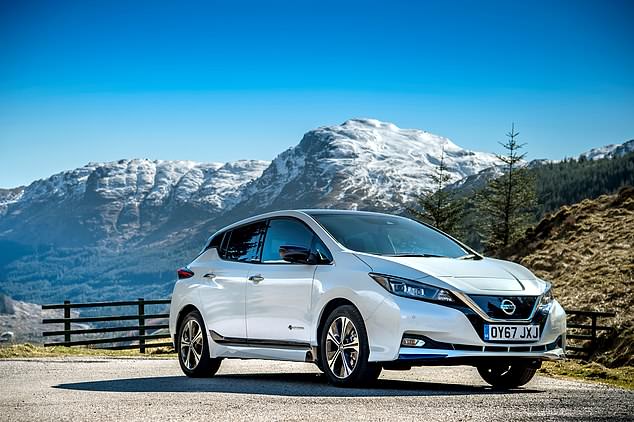 Nissan was furious and said the Top Gear test was unfair. It claimed Clarkson had set out with the batteries only partially charged. File photo

By this point, the battery was too low for me to drive on and try to find another source of energy, so I phoned Ecotricity, the company that runs these particular charge points. Over the next hour, they tried to reset the Gretna chargers twice — but to no avail.

Thankfully, when I rang the folk at the Wigtown Book Festival to tell them of my predicament, a kind volunteer drove 80 miles to collect me.

When at last I arrived, I found the room still full of people who wanted to hear about my book.

Many saw an irony in its title, considering that politicians — step forward Environment Secretary Michael Gove and Transport Secretary Chris Grayling — are behind an initiative to replace all petrol and diesel cars with electric or hybrid vehicles by 2040. (They actually considered banning the sale of any new petrol or diesel cars but have seen sense and downgraded this to a political target instead.)

My own particular electric car-crash, however, wasn’t over.

When I returned the next day to collect my car from the service station, I found the charging points were still out of order and, once again, Ecotricity couldn’t do anything about it.

The helpline staff were very pleasant but told me their maintenance team don’t work at weekends, and no one would be along to fix the chargers until Monday at the earliest.

Eventually I called my breakdown service, who towed me ten miles to another charger that was working. Experiences like this are the reason why, when family and friends ask if they should buy an electric car, I hesitate to endorse the idea.

Most people buy a car because it gives them the freedom and flexibility that public transport can’t deliver. Of course, if you are only driving short distances around town, then an electric car is perfect. But as I have found, longer trips — to an old friend’s wedding, perhaps, or a family emergency in another part of the country — are a different matter.

I had actually considered hiring a petrol-fuelled car for the journey to Wigtown — which, given how much the Nissan cost me, is ludicrous.

I can’t see how the Government is going to persuade the majority of people, not just the environmentally minded ones, that electric cars are a sensible move.

Dale Vince, the multi-millionaire founder of Ecotricity, tried to explain why the charging network let me down so badly.

He pointed out that his company has been running a loss on its Electric Highway — the network of charging stations on motorways — ever since it started in 2011. As a result, it has had to scale back its support services so it can afford to keep the chargers going.

In consequence, the helpline for stranded drivers no longer operates 24/7, and the company doesn’t rush to fix broken chargers. 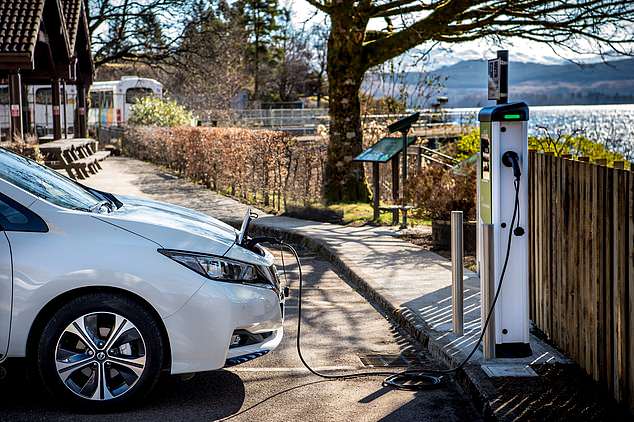 Mr Vince adds that with only 170,000 electric vehicles registered in the UK, just 4 per cent of Ecotricity’s pumps are in use at any one time. File photo

Mr Vince adds that with only 170,000 electric vehicles registered in the UK, just 4 per cent of Ecotricity’s pumps are in use at any one time.

But there won’t be many more takers unless the Government encourages far more investment, both in the charging network and in developing better electric vehicles that can go the distance.

While it’s true that sales of electric vehicles rose by 28 per cent in the UK over the first half of this year, that’s tiny compared with Australia, where there has been a 98 per cent rise; Finland, where sales have gone up by 148 per cent; and Canada, with a 168 per cent rise.

Dustin Benton, policy director at the Green Alliance, which campaigns for better environmental policies, warns that Britain could end up being one of the last developed nations still prioritising the internal combustion engine over electric vehicles.

‘A good comparison is the steel industry, which we didn’t invest in 15 years ago and which now really struggles against its international competitors,’ he says.

I’m not convinced the Government, for all its warm words about tackling air pollution and the money it has allocated so far, really understands the problem.

It would be a great shame if the electric dream turned into a nightmare because policymakers failed to solve the problems that early adopters like me have experienced so far.

For the time being, it seems I’ll have to let the train take the strain — leaving my not-so-trusty electric Nissan connected to its charging point at home, like a patient on a hospital life-support machine.