The Royal College of Nursing said ‘the law is not working’ as a deterrent for those inhaling nitrous oxide, also known as nos.

Its warning comes as festival season approaches and many will see the balloons and hear the hissing of the canisters the illegal drug comes in.

Nos is most popular among people aged between 16 and 24 and around half a million of them have used it in the last year, according to the Government.

But the high it gives can come at a high price – abusing the drug may lead to suffocation or fainting, or lead to addiction and nerve damage over the long term.

Top nurses have warned ahead of festival season that young people need to be better educated about the dangers of taking nitrous oxide, which is usually inhaled from a balloon (Pictured: A woman at Glastonbury Festival in 2015, before the drug was illegal) 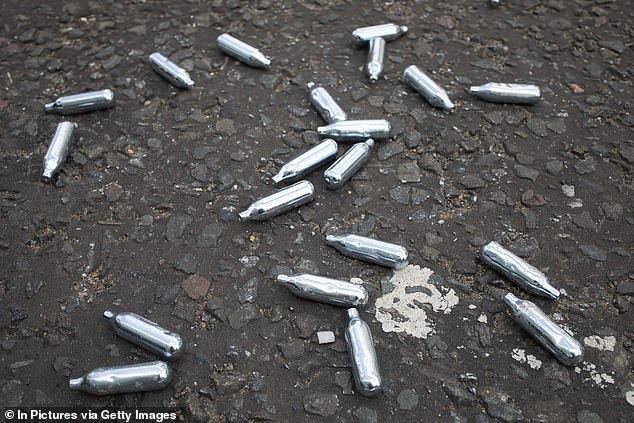 Laughing gas was made illegal as part of the ‘legal highs’ legislation in 2016 but it is still widely available because it’s used by chefs to make whipped cream.

‘Better public information, especially aimed at festival goers and young people, about the risks would help people stay safe and reduce the burden on nursing professionals.’

As well as a danger of breathing problems caused by laughing gas – which replaces normal air when breathed in – people may also suffer headaches and dizziness.

Over a longer period users may end up with a vitamin B12 deficiency which can cause nerve damage in the hands and feet, or problems with their immune system because the chemical can prevent white blood cells forming properly.

The high the drug gives can lead to hallucinations and dizziness, which raise someone’s risk of an accident. 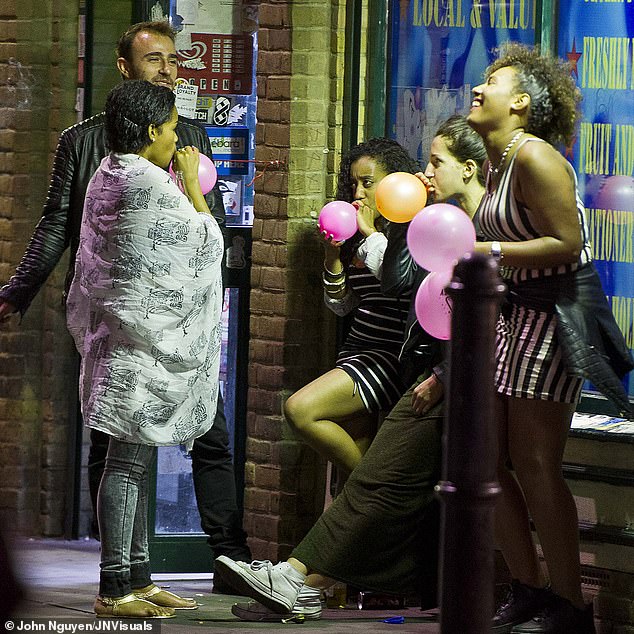 Laughing gas can cause headaches or dizziness when inhaled and, in extreme cases, even lead to fainting or suffocation (Pictured: People holding balloons on Brick Lane, London, in 2014 – before the drug was illegal)

Nurses report treating nos users with dangerously increased heart rates and burns, which can be caused by people inhaling it straight out of the canister.

And it can exaggerate the effects of other drugs, including alcohol, to make people more likely to lose control of their body.

Ms Gamble added: ‘Despite the increasing use of nitrous oxide, particularly amongst younger people, far too few people know about the risks.

‘It might give a short term high but the long term damage is no laughing matter.

‘Along with the physical effects on the body, which themselves can be very serious, there are the psychological impacts associated with the abuse of any substance which can lead to addiction.

‘As nurses we need to have proper conversations with people about the risks, and to support those who need our help.’

Laughing gas is more popular among men than women – with one in 10 males (10.9 per cent) aged 16-24 confessing to taking it within the past year.

This compared to around one in 16 females (6.5 per cent) in the same age group.

Officials estimate there have been an average five deaths per year since 2014.

In December 2018, a former Chief Crown Prosecutor said the new law had failed to stop the supply and described the product as ‘death in a box’.

‘When taken recreationally, it can cause euphoria and help people to feel more relaxed, sometimes becoming giggly or hallucinating,’ said Roz Gittins, spokesperson for the charity Addaction.

‘There are, however, risks associated with its use and breathing problems may occur when large amounts of the gas is inhaled over a short amount of time or in an enclosed space if the person cannot breathe in enough oxygen.

‘It may also cause burns due to coldness if inhaled directly from a canister or anaemia and nerve problems due to vitamin B12 deficiency associated with heavy use.’