There is NO advantage to playing the second fixture of a double-legged football match at home, study finds

Double-legged fixtures in the world of football can be contentious, with many believing the team which gets to play at home second has an advantage.

But research done by scientists in Belgium has crunched the numbers and found this myth to be unfounded.

A total of 320 two-legged matches were analysed from the UEFA Europa League and Champions League between 2010 and 2017 and no evidence was found to support an advantage either way.

Double-legged fixtures in the world of football can be contentious, with many believing the team which gets to play at home second has an advantage. Derby County’s stunning victory against Leeds United in the playoff semi-finals, and now a team of scientists Belgium, have proved this isn’t the case

WHAT IS THE SECOND-LEG MYTH?

Therefore, home advantage in that game is crucial.

This second leg home advantage is supposed to be present especially when the confrontation is tied and added time or decisive penalty kicks are needed in the stadium of the team hosting the second game.

A random ‘Non-seeded’ two-legged confrontations occur before the main Bournemouth and a random draw decides which team plays first at home and which team hosts the second leg.

Teams hosting second went through to the next stage of the tournament 48.8 per cent of the time, with those playing at home first having the edge.

However, the small difference between both types of teams was not statistically significant and may be down to coincidence,researchers explain.

‘This second leg home advantage, if it exists, seems to be compensated for by other dynamics,’ said researcher Simon Amez from Ghent University.

‘Probably, a second leg home team that has overcome a bad first leg result can only do so by taking big tactical risks that can be linked with higher chances of conceding goals.’

It has long been thought playing at home second is preferable as it allows any situation to be corrected.

Having home advantage, where the team feels more conformable and has the support of the crowd, is therefore a bonus in allowing them to manage the game successfully.

It is thought to be most prominent when the first game was a draw or it goes down to extra tie or penalties. 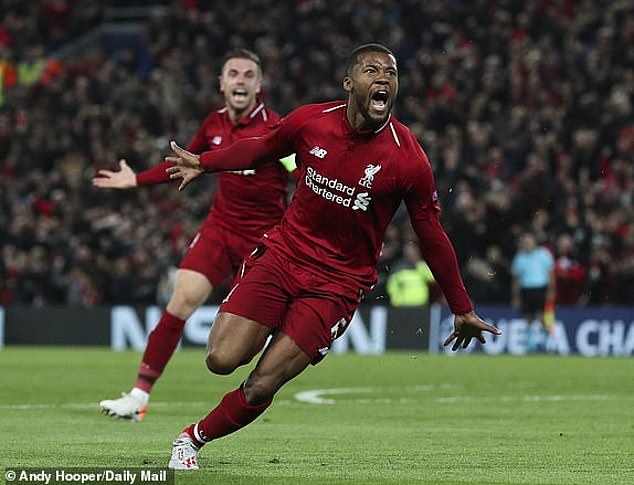 The myth seemed to work for Liverpool as they suffered a 3-0 defeat in Spain but, when the return leg was played at home, they prevailed victors 4-0 (pictured). However, scientists found teams hosting second went through to the next stage of the tournament 48.8 per cent of the time

Having the return leg at home was beneficial this year for Liverpool, as they mounted one of the most memorable Champions League comebacks of all time against Barcelona in the semi-finals.

The men from Merseyside suffered a 3-0 defeat in Spain but, when the return leg was played at home, prevailed as victors with a 4-0 win.

They would later go onto win the competition, the sixth in their history.

However, the second leg at home myth failed Leeds United in their push for promotion from the Championship this year.

They were playing rivals Derby County and in the second leg at Elland Road, Derby prevailed in a 4-2 stunner which sent them through to the playoff final at Wembley, at the expense of Leeds.