Europeans will have to fork out billions more to fund the EU Budget if there is a No Deal Brexit and Britain does not pay £39billion divorce bill, the bloc’s finance chief warns

A no deal Brexit could leave Europeans having to fork out billions more to plug the gaping hole in the EU’s budget, the bloc’s finance chief has warned.

Gunther Oettinger said the remaining 27 member states will face a hefty bill if the UK does not pay the £39billion divorce bill it has promised.

And he warned that Germany alone could have to cough up hundreds of millions of euros more to fund the shortfall.

Quizzed on the possible fall-out of a no deal Brexit, Mr Oettinger, EU Commissioner for the Budget, said it could mean Europeans having to pay more.

He told the German newspaper Westfälische Rundschau: ‘It depends on whether, following a disorderly Brexit, the British would be prepared to fulfill their rights and obligations as contributors by the end of the financial year 2019.

‘If this is not the case, next year a medium three-digit million amount will be added to Germany.’

His comments suggest that the EU 27 member states left in the bloc could have to pay billions more into the Budget.

Brexiteers have urged Theresa May to refuse to hand over the hefty divorce bill until the EU agrees to a  trade deal – warning that Britain risks throwing away its trump card in talks if it signs over the cash earlier.

The PM has thrashed out a Brexit deal with the EU – but her plan has been plunged into turmoil and her authority dealt a hammer blow by the troubled talks.

She delayed a crunch vote by MPs on her deal after admitting that she would have been defeated by a massive margin.

The humiliating admission dealt a major blow to her authority and triggered an attempt to oust her as leader by her Brexiteer backbenchers. 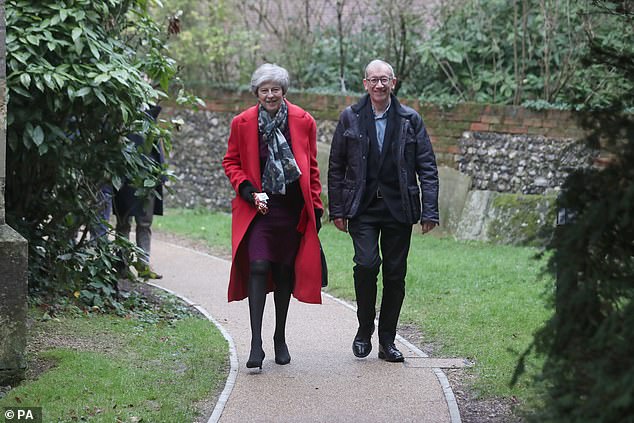 Mrs May survived the dramatic confidence vote and clung on in No10, but only by promising to return to the negotiating table to convince the EU to scrap the controversial Irish backstop

But so far her pleas for more concessions to give her deal a fighting chance of getting her deal passed by MPs have been snubbed by EU leaders.

The PM’s deal is widely expected to be voted down by MPs when the Commons votes on it next month, after over 100 Tories voiced grave concerns over the blueprint and the DUP vowed not to back it.

But Mr Oettinger said he believes that Britain could back the Brexit deal – despite the fierce criticism it has sparked.

He said: ‘It is not entirely unlikely that the British Parliament will vote for the divorce treaty in January.

‘For a disorderly Brexit or for a new referendum there is certainly no majority.’