No-deal Brexit ‘WILL mean hard border on island of Ireland’

No-deal Brexit WILL mean a hard border between Northern Ireland and the Republic, EU admits

No-deal Brexit will mean a hard border between Northern Ireland and the Republic, the EU admitted today.

The EU commission gave the clearest indication yet that it will insist on physical checks if the UK crashes out of the bloc.

The comments could spark tensions with the Irish government, which has repeatedly insisted there are no plans for a hard border even if there is no deal.

A spokesman for the Irish government said there will need to be ‘difficult’ conversations about the border if there is a no deal Brexit and warned Britain will have to ‘live up to its responsibilities’.

Theresa May’s Brexit deal was defeated in large part because of the ‘backstop’ provision that is intended to avoid the need for a hard line.

Dublin’s deputy PM Simon Coveney was caught on microphone earlier this month apparently conceding that there would need to be checks, but warning they could not state that publicly for fear of a backlash.

Following the gaffe Irish Taoiseach Leo Varadkar quickly denied there was any ‘secret plan’ for a hard border.

‘We are not planning for checks on the land border in Northern Ireland,’ he told the Irish parliament.

However, EU commission spokesman Margaritis Schinas seemed to take a different line when he was pushed on the issue in Brussels today.

‘If you like to push me and speculate on what might happen in a no-deal scenario in Ireland, I think it’s pretty obvious, you will have a hard border,’ he said.

‘Our commitment to the Good Friday Agreement and everything that we have been doing for years with our tools, instruments and programmes will have to take inevitably into account this fact.

‘So, of course, we are for peace, of course we stand behind the Good Friday Agreement, but that’s what a no-deal scenario would entail.’

A spokesman for the Irish government said: ‘We will not accept a hard border on this island and therefore we are not planning for one.

‘Working out suitable customs and trade arrangements compatible with our EU membership will require detailed discussion with the Commission, while the UK will also need to live up to its responsibilities.

‘We are under no illusions about how challenging that would be.’

Mr Coveney forgot his microphone was still on as he spoke to Transport Minister Shane Ross while Mrs May suffered her humbling Commons defeat on the Brexit deal last week.

But he warned that ‘we can’t get into where they’ll be’.

He added: ‘People will start delving into that and all of a sudden we’ll be the government that reintroduced a physical border on the island of Ireland.’

DUP leader Arlene Foster has insisted there is no need for the Irish backstop as Mr Varadkar has vowed not to erect a hard border.

‘As someone who lived through the Troubles,’ she said, ‘we never had a hard border. 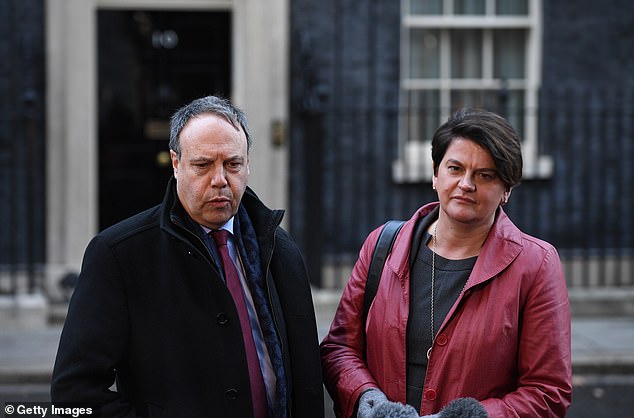 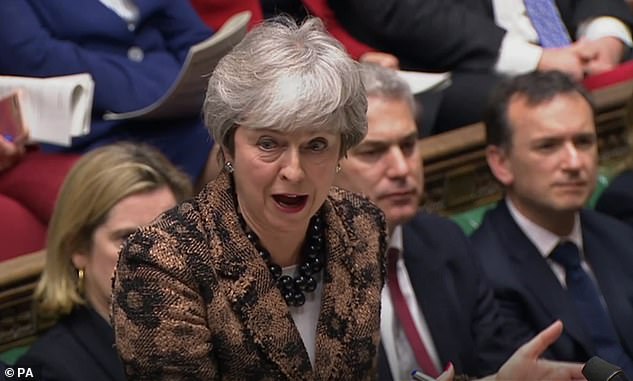