The Bank of England has warned the pound would crash, inflation will soar and interest rates would have to rise in the event of a no deal disorderly Brexit.

Bank Governor Mark Carney said the impact of Brexit would depend entirely on whether there was a deal but said he had a duty to spell out what might happen.

Mr Carney said the Bank’s job was not to ‘hope for the best but prepare for the worst’ – but his blood-curdling claims will enrage Brexiteers.

The figures are contained in a ‘worst case scenario’ published by the Bank which suggests in a last-minute no deal, no transition Brexit Britain’s GDP could plunge rapidly by 8 per cent – much worse than the 2008 financial crisis.

But he faced a backlash from Eurosceptic MPs, who accused him of mobilising ‘Project Hysteria’ in support of Mrs May’s deal.

Ministers were cautious about publicly endorsing the Bank, worried about being accused of re-running the Project Fear campaign which was seen to have done more harm than good in the 2016 referendum.

Mr Carney’s chilling intervention on the short term impact of no deal comes hours after a Government analysis revealed that in all scenarios, the UK will be poorer 15 years after it leaves the EU than it would have been without Brexit.

Mr Carney insisted: ‘These are scenarios not forecasts – they illustrate what could happen not necessarily what is most likely to happen….they are informative about the relative economic impacts of various relationships.

‘The impact of Brexit will depend on the direction, magnitude and speed of the effect of reduce openness on the UK economy.

‘The direction of the effects of the reduction in openness is clear – lower supply capacity, weaker demand, a lower exchange rate and higher inflation.’

The Bank said in all scenarios the economy would be smaller than it otherwise would have been even if a comprehensive deal keeps Britain close to the EU.

Unemployment – which is at record lows – is likely to stay at similar levels with a close deal and could even fall a bit further. Inflation will also stay low after a deal.

Jacob Rees-Mogg, leader of the European Research Group, said: ‘It is unusual for the Bank of England to talk down the pound and shows the Governor’s failure to understand his role. This is Project Hysteria. 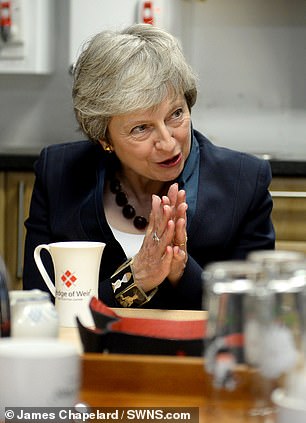 ‘The reputation of the governor has plummeted by more than any economic indicator. It was always a mistake to appoint a Canadian politician to a senior economic role.’

Charlie Elphicke – the MP for Dover – said: ‘Today the Bank of England Governor is saying rates would rise

‘The other day he was saying they could go down. The Bank is all over the place.

‘Are we seeing direct political interference in the Bank of England?’

ERG deputy chairman, Steve Baker MP: ‘The Governor is often one of our greatest statesmen but not, ironically, when he weighs into politics.’

Andrew Sentance, an economist who used to sit on the Bank’s interest rate setting Monetary Policy Committee, dismissed the forcecasts.

He said: ‘Does anyone really believe any of this as a real-world scenario?

‘Bank of England is undermining its credibility and independence by giving such prominence to these extreme scenarios and forecasts.’

But Justice Secretary David Gauke said: ‘Of course, people can disagree with the Bank of England view. But to dismiss the possibility that it may be broadly right seems like an act of faith, not reason.’ 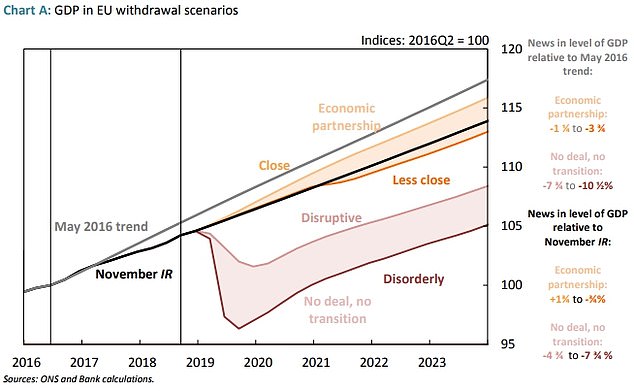 The Bank of England set out a range of scenarios for what might happen to the size of the economy after Brexit today, predicting a catastrophic recessions if there is no deal and no transition (the dark red line marked disorderly) 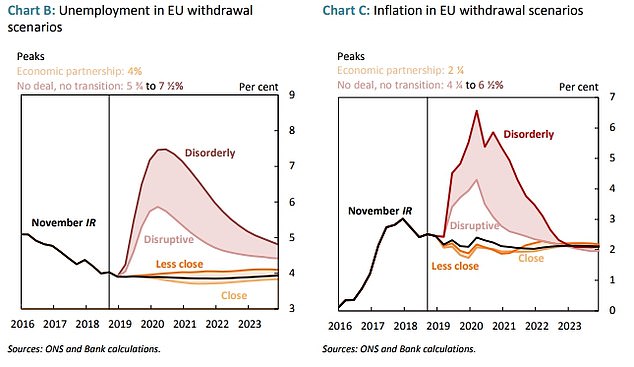 But Labour’s Wes Streeting said the Governor’s warning emphasised the need for a People’s Vote.

He said: ‘Nobody voted to lose their job, see their wages cut, for higher public borrowing or less funding for public services.

‘Nobody voted for this blindfold Brexit and for years of endless negotiations and renegotiations or for a £50 billion divorce bill with no say over our future.

‘People do not want a choice between this miserable deal and no deal. They want a People’s Vote and the chance to stay in the EU as full members with all our rights.’

Shadow chancellor John McDonnell said the Bank’s warning should stop the Government from ‘ploughing on with this discredited deal’ that will not pass the Commons.

He said: ‘The Bank has confirmed what other independent reports this week have been telling us: a No Deal Brexit could be even worse than the financial crisis of ten years ago, and the country would be much worse under Theresa May’s deal.’ 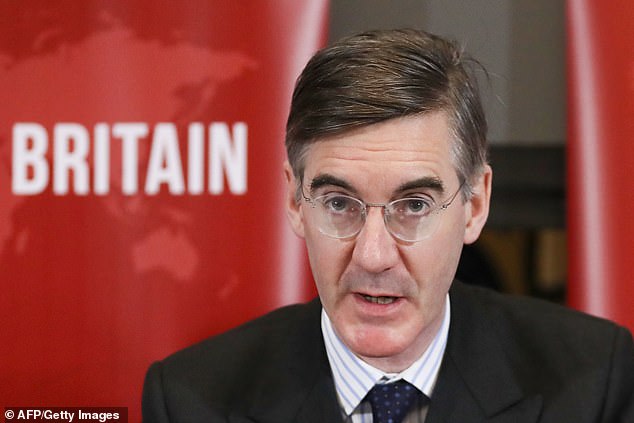 Jacob Rees-Mogg, the leader of the Brexiteer ERG group,accused the Governor of trying to ‘create panic’ with his bleak predictions

The Prime Minister’s favoured plan will leave the economy 2.5 per cent smaller after 15 years than if the country had stayed in the EU.

But crashing out without any agreement would be much worse – potentially meaning giving up 9.3 per cent of GDP over the period.

There is a wide regional variation in how different deals hurt different parts of the country.

London does best out of a no deal scenario, losing out on around 6 per cent of future growth – but worst from the Chequers deal, which excludes the service sector that dominates the capital’s economy.

The north east suffers most in a no deal, losing out on more than 10 per cent of economic growth.

The best outcome for Wales and Scotland is a Chequers-based solution, which sees only a fractional loss in future growth.

The absolute worst case scenario is a 10.7 per cent hit to the economy after no deal – equivalent to £200billion or £3,000 per person by 2035, according to Bloomberg analysis.

The Canada-style relationship endorsed by many Brexiteers would result in a 6.7 per cent hit, while even a Norway model keeping similar free movement rules would entail a 1.4 per cent loss.

MPs will vote on Theresa May’s Brexit deal after a marathon five-day debate in Parliament.

The House of Commons will debate the deal secured by the Prime Minister before the all-important vote on December 11.

MPs will be able to put down six amendments to the Government’s key ‘meaningful vote’ Brexit motion under plans unveiled for the crunch Commons showdown.

The debates themselves will last for eight hours a day, a total of forty hours, and are sure to be lively as the Prime Minister battles to secure a majority to back her plans.

Labour has tabled its amendment to the Government motion saying it aims to stop a ‘botched Brexit’.