A BBC Sport commentator and his two labradors have entertained fans on Twitter with a hilarious video of a team meeting on Zoom.

Andrew Cotter, 46, who lives in Cheshire, posted a video last month of his dogs Olive and Mabel competing in an eating race and a tug-of-war over a toy.

Now the trio have returned in another video where they are holding a company meeting.

When posting the video Andrew commented: ‘Still having the company meetings online.’

Andrew Cotter, 46, and his labradors Olive and Mabel have returned in anther hilarious video. This time the trio are holding a business meeting

At first both labradors seem to struggle with the technology as Andrew walks them through turning on their cameras.

He says: ‘Mabel you are connected but you need to start your video. Down at the bottom of the screen there’s a little camera, looks like a biscuit, if you just nudge it with your nose.’

Andrew tells his dogs that they won’t be furloughed and that the dogs are expected to show the same loyalty to him.

It doesn’t take long for Mabel to start staring into the distance prompting Andrew to pick her up on her lack of focus.

‘This is one of the things that we have to address,’ he says, ‘the lack of focus at times because well there’s the inappropriate stuff with Kevin the Doberman from accounts as well but one thing at a time.’ 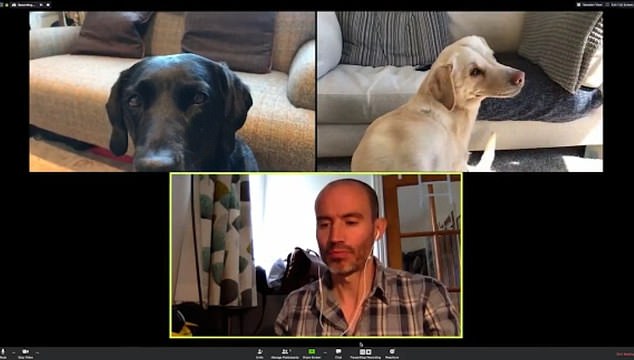 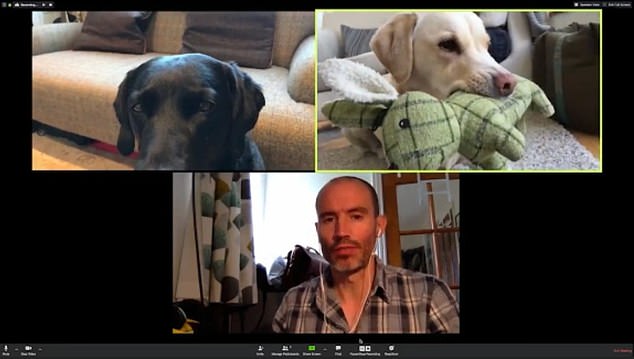 She reappears after scratching with a green squeaky toy in her mouth, much to the annoyance of Andrew who says he has to mute her to continue talking with Olive

He then delivers the annual report: ‘You’ve pretty much ruined the sofas. 913 squirrels chased, none caught, so not a good return.’

The report seems to bore Mabel though who turns away and begins scratching herself.

Andrew tells her to switch her camera off if she needs to scratch so that the rest of them don’t have to see it.

Mabel returns to the video after having retrieved a squeaky toy.

Towards the end of the video Mabel leaves the call and Andrew considers firing her but doesn’t because ‘she gets such good results’. 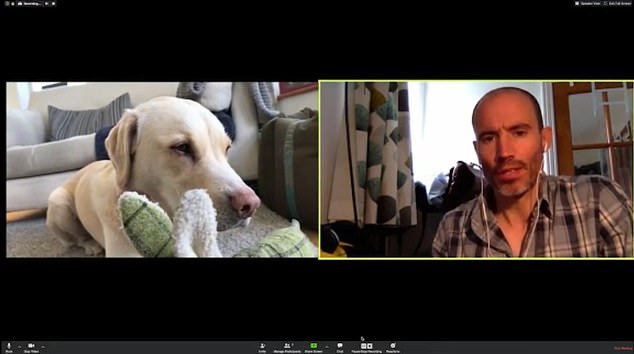 Replying to the video on Twitter, one person said: ‘Andrew, you’re brightening up my life and it was already pretty good anyway! Keep em coming!’

Another, Eloise Baily said: ‘Andrew, Olive and Mabel…and you a bit…have easily been the best thing to come out of lockdown. Genuinely, thank you.’

While Graham Love commented: ‘You just raised the game .’

In April, Mabel and Olive shot to internet fame after Andrew Cotter posted a video of him commentating as the dogs competed in an eating race and a play fight over a toy.

Describing the eating match in the earlier video Andrew says: ‘Mabel heavy tail use, happy to be alive, everything is amazing. Olive more steady, wasting little energy, very much of the old Labrador school of serious business.

‘Olive, focused, relentless, tasting absolutely nothing… Nothing left but the bowl to lick now.

‘Great rivals but great friends. You see the swapping of bowls there at the end.’