A German government advisor has said it is still too early to tell what the effect of easing the country’s coronavirus lockdown has been despite another rise in cases.

Germany reported 1,478 new cases of the virus on Thursday, meaning the daily total has now increased every day this week.

But Professor Tobias Welte, who is part of the German virus response team, said it will take until next week at least for the effects of easing the lockdown to be felt.

He signalled there will be no change in government policy until then.

Germany reported 1,478 new cases of coronavirus on Thursday, meaning the daily infection total has now risen every day this week 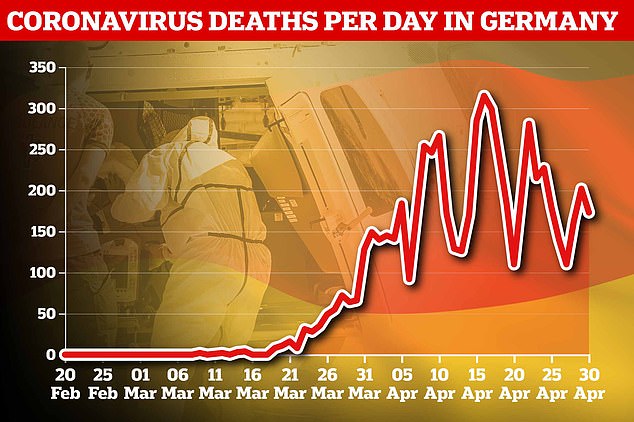 Germany reported another 173 deaths from the virus, down from 202 deaths on Wednesday 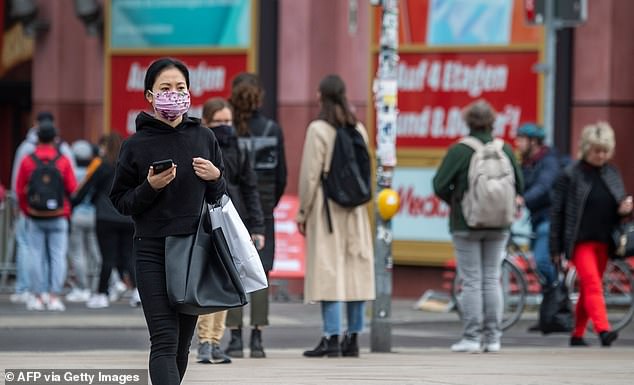 Speaking to BBC Radio 4, he said that cases are still trending downwards overall despite an apparent rise in the daily data.

He pointed to the ‘weekend effect’ that has been observed throughout Europe – where less data is logged at the weekend because people are away from their desks, causing a backlog that is steadily cleared throughout the week.

This leads to an apparent peak in infections midweek, while in fact the numbers may have remained steady or even declined on average.

For example, Germany reported an average of 2,040 cases last week, even while the daily figures were declining. 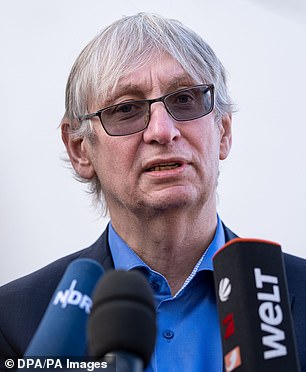 Tobias Welte, who is helping advise the German government, said it will take another week at least for effect to be felt

By comparison, the country has reported an average of 1,236 cases every day this week, even though the daily figure has been creeping upwards.

Professor Welte added that it is too early for the effects of lifting the lockdown to show in the daily infection data because of the incubation period of coronavirus – which can be up to 14 days.

He said: ‘The end of lockdown started about a week ago, normally with coronavirus it is a very long timeframe.

‘We will see next week what was the consequence of shutting down the shutdown.’

He spoke as Chancellor Angela Merkel – who has warned that lockdown measures will be reintroduced if the infection rate creeps up – met with regional governors to discuss next steps in easing the lockdown.

Ahead of the meeting, her chief of staff Helge Braun told the media that social distancing measures would almost certainly be extended until at least May 10.

That will allow the government to review infection data at another meeting next week, when the effects of easing the lockdown will be more apparent.

Giving a glimpse into the German government’s strategy going forward, scientists from four well-respected research groups – including the Max Planck Society and the Leibniz Association – outlined what they believe is the best response.

They dismissed the idea of pushing for ‘herd immunity’ because they say there is not enough evidence that a person who has been infected with coronavirus cannot be infected a second time. 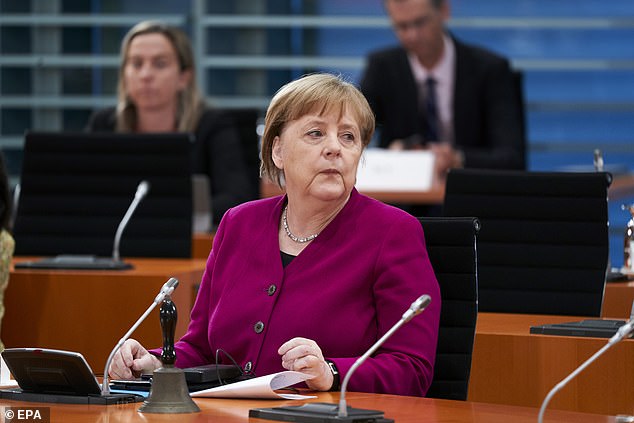 Angela Merkel chaired a meeting of regional governors Thursday to discuss further lockdown measures, but her chief of staff said social distancing will remain in place until at least May 10

Long-term effects of infection, such as trauma to the heart and lungs, are also poorly understood, they told Die Welt.

Similarly, trying to wipe out the disease while it is still circulating freely in parts of the world is also impractical, they argue,

Instead, the strategy must be to contain the virus in order to stop it spreading through the local population via increased testing and contact tracing.

Such strategies have proved extremely effective in places such as South Korea – site of one of the earliest outbreaks outside China – where zero domestic infections were reported Thursday.

The country has never enacted a full lockdown of the kind seen in Europe.

Only once the number of cases has fallen to such a level that they can be adequately contained with testing and contact tracing should social distancing be stopped, the German scientists said.

They also warned that it will likely take longer than a week to know the true effect of easing lockdown measures, because of the virus’s two-week incubation period.

It may take until the second week of May to know what effect lifting the restrictions on April 20 has had, they said.

German jobless total soars in April due to coronavirus

The jobless total soared to 2.6 million in April from 2.3 million in March, according to data compiled by the federal labour agency BA.

And in seasonally adjusted terms, the unemployment rate jumped to 5.8 percent this month from 5.0 percent the previous month, the agency said. 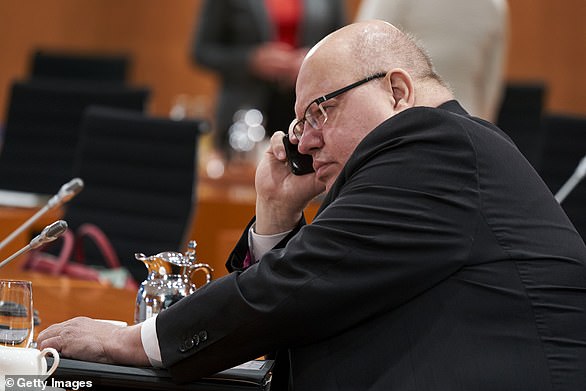 ‘The coronavirus pandemic will likely lead to the most serious recession in Germany of the post-World War II period,’ BA chief Detlef Scheele said in a statement. ‘The labour market is also coming under pressure.’

On top of April’s increase in the jobless count, some 750,000 companies applied to place 10.1 million workers on government-funded shorter hours schemes, the BA said Thursday.

Known in German as ‘Kurzarbeit’ and credited with saving hundreds of thousands of jobs during the 2009 financial crisis, Berlin widened access to the programme as the scale of the coronavirus threat became clear.

Applications for the scheme do not mean that workers will in fact be placed on shorter hours.

‘Nevertheless, this is a never-before-seen figure compared with recent decades, and a multiple of the notifications seen during the great recession in 2008-09,’ the BA said. 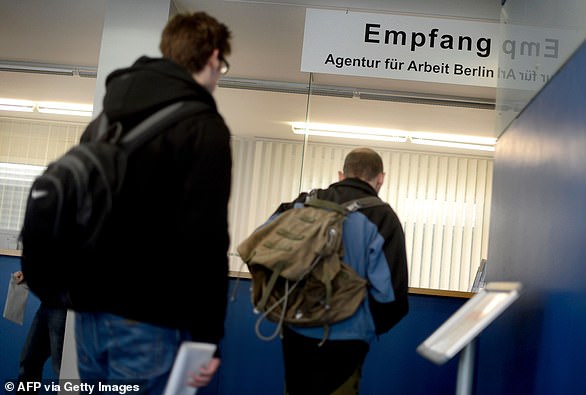 Over the whole worst year of the crisis in 2009, firms made shorter-hours applications for just 3.3 million workers.

Meanwhile the number of open positions registered by the BA ‘downright collapsed,’ Scheele said, dropping by 169,000 to 626,000.

Germany, with its ageing demographic, has in recent years been plagued by labour shortages far more than by unemployment.

To help cushion the coronavirus blow for companies and workers, the German government has unveiled a massive rescue package worth over one trillion euros.

Such measures are intended to preserve economic structures, in hopes of fostering a post-lockdown rebound that minister Altmaier said Wednesday could bring 5.2 percent growth in 2021.