‘No news is not always good news’: Donald Tusk trolls PM over Brexit

‘No news is not always good news’: Donald Tusk trolls PM over Brexit saying the EU still has not heard any ‘realistic’ ideas for breaking deadlock

Donald Tusk ramped up tensions with Theresa May today – goading that the EU had still not been offered any ‘realistic’ solutions to the Brexit impasse.

The EU council president demanded the PM finds a way through the increasingly bitter row – warning: ‘No news is not always good news.’

The jibe came as Theresa May battles to hold her Brexit plan together as she faces Remainer and Eurosceptic revolts in crunch votes.

The Prime Minister must navigate a minefield in the House of Commons as tensions rise with the clock running down to the UK’s departure.

Mrs May has been pleading for more time to secure concessions from the EU on the Irish border backstop that could win MPs’ support for her deal.

But she is confronting fresh challenges to her authority tonight as she seeks endorsement from Parliament for her approach, with Tory hardliners accusing her of trying to rule out a no-deal Brexit by stealth and threatening to join forces with Labour to inflict a stinging defeat.

Trade Secretary Liam Fox pleaded with his colleagues not to rebel, warning that the Commons is not an ‘internal debating society’ and it would ‘send the wrong signals’ to Brussels.

Meanwhile, cross-party Remainers have tabled amendments designed to bind Mrs May’s hands in the negotiations and force a referendum that could cancel the UK’s departure from the EU altogether.

He tweeted: ‘No news is not always good news. EU27 still waiting for concrete, realistic proposals from London on how to break #Brexit impasse.’ 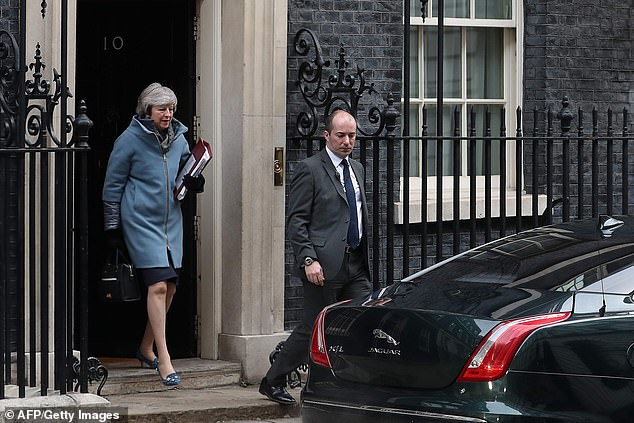