This is the moment a couple staying at a Hilton hotel in Fort Wayne, Indiana, were left baffled after discovering they couldn’t close their bathroom door.

Footage filmed by the couple shows their ‘huge’ bedroom with a view of the city below.

But one of the guests then walks over to the bathroom and is unable to close the door past the toilet.

At the start of the video, taken in April 2018, the guest walks around the room saying: ‘We’re at the Hilton, okay check out this room.

The guest points towards a view from their window of the city below, saying: ‘Look at that view.’

She then walks towards the bathroom, continuing: ‘Anyways, so we come over here, I’d like to use the bathroom right, here’s the door.’

She then demonstrates how the door hits the toilet when she tries to close it, bursting into laughter and saying: ‘What are you supposed to do with that? 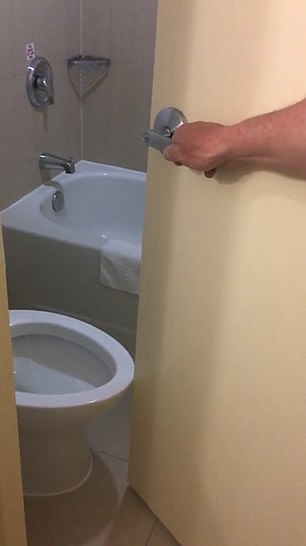 This is the moment a couple staying at a Hilton hotel in Fort Wayne, Indiana, were left baffled after discovering they couldn’t close their bathroom door

According to Rumble, the guest who filmed the video explained: ‘We went to a hotel in Fort Wayne Indiana and my boyfriend discovered the bathroom door wouldn’t shut because the new toilets they installed during a recent renovation were too oval and stuck out.

Other guests at the Hilton Fort Wayne have similarly complained in the past on TripAdvisor about struggling to close their bathroom door.

In March 2018, one guest wrote on TripAdvisor: ‘Although the hotel is attractive and clean, I can’t get past the fact that it has the most ridiculous bathroom ever.

‘When closing the door it almost brushes the toilet it is so tight.’ 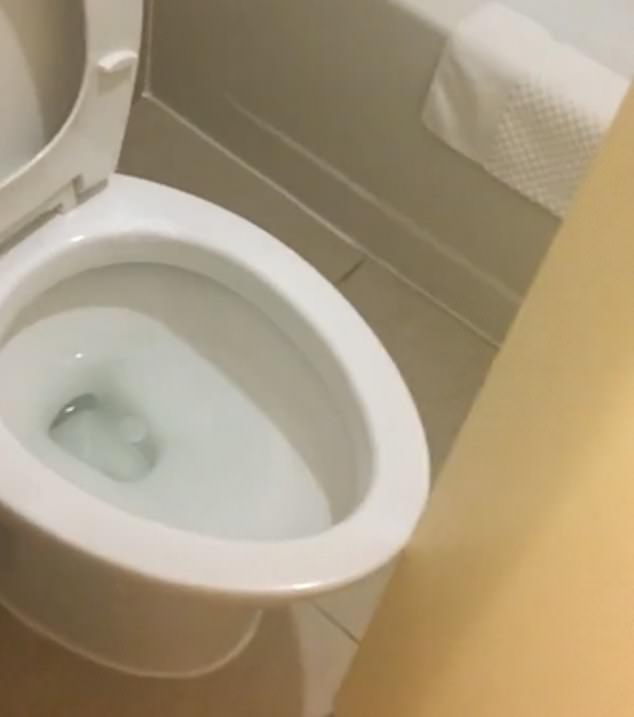 In May 2017, another wrote on TripAdvisor: ‘We had to lift the lid of the toilet to close the bathroom door!’

In the same month, another said there was ‘only two inches clearance between the toilet and door’.

‘The situation referenced in the video was isolated to a single guestroom, occurred in 2018, and has been remedied.

‘We have confirmed all our rooms have proper clearance between the toilet and the bathroom door.’