No striker, no problem: But imagine how scary Man City would be with Harry Kane

No striker, no problem (but imagine how scary they’d be with Harry Kane!): Manchester City boss Pep Guardiola says the club has an ‘obligation’ to ‘get better’ as the end of the transfer window looms after battering Norwich

They can do this to teams, Manchester City. Far better teams than an obliging Norwich too. Not many could score this many with their only recognised striker acting as a winger.

But here they were and here is what they do. Pass, pass, pass, wide men behind their full backs, balls into an area and suddenly another goal for their tally.

City converted four of their 26 crosses on Saturday, aided somewhat by abject defending, so then came the claims that perhaps Harry Kane is not required after all. 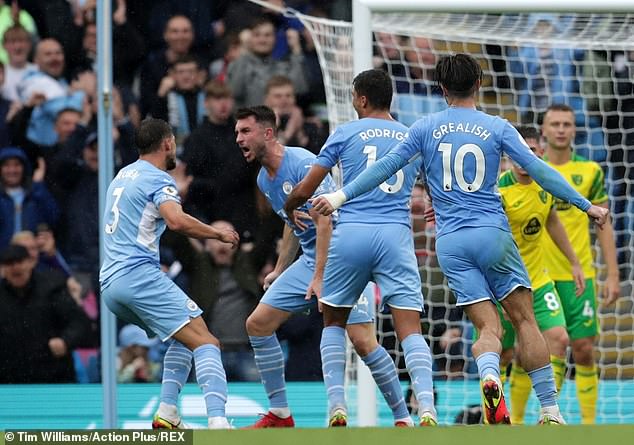 Pep Guardiola will not fall into that trap. Deep down, he probably believes this might well have ended near double figures if Kane was sporting blue.

The City boss spoke of an ‘obligation’ to improve the squad every year when asked about the striker situation.

They have done that in the £100 million signing of Jack Grealish, whose thigh bundled in a first City goal, but whether the champions can really go deep into every competition without a fully fit and predatory No 9 in consecutive seasons is up for real debate. City are good without Kane but a behemoth with him. 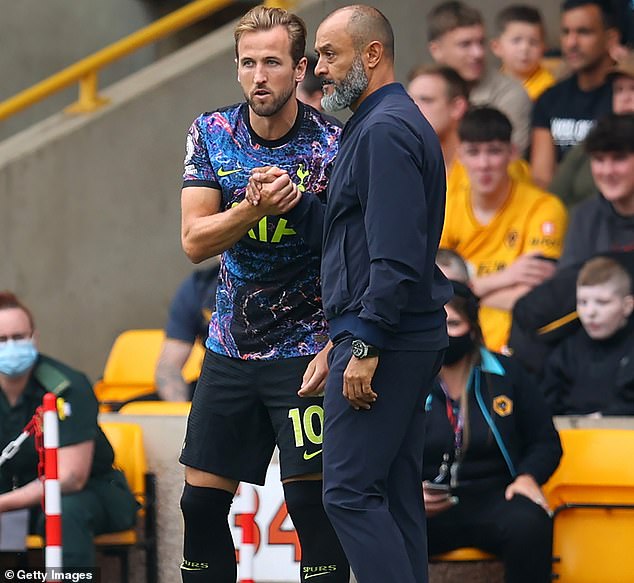 This is the week for Kane. Something has to give, whether it is City paying the £150m asking price or working towards a compromise from the last £125m offer. Or perhaps looking elsewhere for a short-term option if Tottenham are not budging.

Games like this, a procession during which Norwich mustered one attempt off target in the 78th minute, are ultimately not where Kane improves City. It is the tight ones, the niggly ones — last week’s 1-0 defeat at Spurs — where he propels them into a new sphere, just as Sergio Aguero had done previously.

There was evidence of how that might look against Daniel Farke’s meagre back line, a few occasions where balls fizzing across the six-yard box were begging to be tapped in.

penchant for hurling balls into the box when the chips are down.

‘We still have 10 days in the transfer market, we’re going to see what happens,’ Guardiola said. ‘If the team is the same one, I said on Friday, before the 5-0, I am more than pleased with the team.

‘I’ve never complained since I arrived here and I will not do it now but, of course, the club has an obligation, the duty to look forward, to get better, to feel we can still be there with a tough Premier League and this is what we are going to do.’

It presents intrigue as to how City play the next week or so, certainly given the suggestions from Guardiola for the first time that Gabriel Jesus — who assisted three of the goals from the right — has told him he now prefers to play wide.

Jesus was exceptional, coached by his manager on the touchline as to when and how to perfect arched or darted runs inside his marker. ‘I’ve been playing as a winger for Brazil for the last two years,’ Jesus said. ‘For me to play on the right wing is more normal now.’

There was also confirmation that Liam Delap, the highly-rated 18-year-old striker, will not be heading out on loan. Half of the Championship have asked about the England youth international, who signed a new five-year contract last week.

Delap obliterated the Premier League 2 goalscoring record last season and notched on debut for the seniors in the Carabao Cup.

‘It was a pity with Liam because he arrived in pre-season and the first day he was injured,’ Guardiola added. ‘He’s an exceptional striker. He might be the most requested player we have had since we arrived but we count on him, he’s going to train with us.

‘It depends what’s going to happen this season, if he has minutes or maybe we decide on another option.’