Downing Street is advertising for £135,000-a-year worker who will be responsible for a new data science unit at No10.

The candidate will head the ‘skunkworks-type organisation’ and lead the new analytical unit known as ’10ds’, which stands for ’10 Data Science’.

The new unit is aimed at ‘transforming’ decision-making in the government, The Telegraph reported.

The term ‘skunkworks’ originated in the U.S. during the Second World War and describes a project developed by a small and loosely structured group focusing on radical innovation.

Dominic Cummings, the Prime Minister’s chief aide, has been a longstanding critic of the way the civil service works

It says: ‘The vision of 10ds is a skunkworks type organisation that builds innovative software to allow the PM to make data driven decisions and thereby transform government.’

The unit ‘will ensure that No10 is an intelligent customer of analysis, providing challenge and feedback across government’.

The Analytical Unit is ‘a pseudo start-up within No10 designed to drive forward the quantitative revolution. The current plan is to establish a data engineering team, data science team, a skunkworks and an analytical deep dive unit.’

The job is offered as a two-year appointment and applications close on July 27.

Dominic Cummings, the Prime Minister’s chief aide, has been a longstanding critic of the way the civil service works, calling for more modern organisation and data-driven policies. 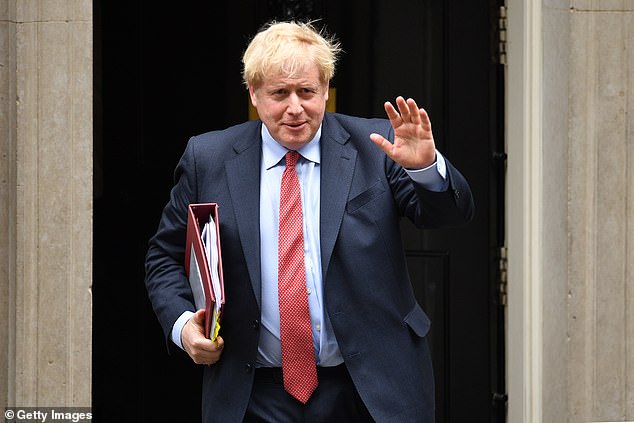 It was used to describe a small and loosely structured group who focused on radical innovation in their research and development.

Now, it typically refers to technology projects developed in semi secrecy such as Google X Lab.

During the 2016 Vote Leave campaign, Mr Cummings used data to transform polling done during the lead up to the referendum.

In a blog post, Mr Cummings wrote: ‘One of our central ideas was that the campaign had to do things in the field of data that have never been done before.’

He added that they had experts in physics and machine learning with skills far beyond the normal applied to political campaigns.

The physicists looked at campaigns from around the world and built a scientific model based on the research. They exploited themes and tactics in successful campaigns.

In January, Mr Cummings posted an advert for ‘assorted weirdos’ to apply for jobs within the civil service.

This was a direct challenge to the civil service and Whitehall establishment which Mr Cummings had long criticised and Mr Johnson planned to reform.

Writing on his personal blog, Mr Cummings set out plans for a Downing Street shake-up in which maths and physics PhDs would mingle with ‘weirdos and misfits with odd skills’ and people who ‘fought their way out of appalling hell holes’.

Mr Cummings warns recruits that he will ‘bin you within weeks if you don’t fit’, adding: ‘Don’t complain later because I made it clear now.’

One of the appointees, Andrew Sabisky, quit in February amid criticism of controversial past comments on pregnancy, eugenics and race.

What is the job and what skills do you need?

The successful candidate will play a key role in the senior leadership team at 10 Downing Street.

To be considered for the role, the candidate must be ‘an inspiring leader’, ‘an engaging communicator’, ‘a trusted advisor’ and ‘a technical expert’.

10ds is designed to drive forward the quantitative revolution and the new worker will be in a newly created role.

They will be responsible for establishing No10’s quantitative ability and help to drive change across Whitehall through the establishment of a newly formed team.

The unit will sit in No10 and transform how the Government uses data to facilitate more effective decision-making at the centre and across Government.

One of the key tasks will be developing No10s analytical capability to enable delivery of the project.

The candidate will also prioritise and strategically plan the pipeline of projects to be undertaken by the team.

A given example of the role the person will do is advising the Prime Minister’s priority decisions where analysis is critical, such as how to optimally achieve net-zero.