The Government’s long-awaited Covid inquiry will examine whether the NHS’s lack of beds forced ministers into draconian lockdowns.

Officials today published a draft of the topics set to be probed, which include the ‘preparedness, initial capacity and resilience’ of the health service.

It also aims to examine the safeguarding of public funds during the pandemic, the procurement of PPE, the use of Do Not Attempt Resuscitation notices and the impact of the Covid on health staff.

The inquiry will have the power to compel documents to be handed over and summon witnesses to give evidence under oath — even the Prime Minister.

Baroness Heather Hallett will lead the inquiry, which No10 vowed would start this spring after Boris Johnson was accused of de-prioritising it in the wake of the Partygate scandal.

Campaigners warned in January it would be impossible to hit the spring deadline because of the delays in agreeing on the terms of reference.

The final scope won’t be agreed upon for another month, pushing the actual inquiry back to potentially May.

MPs today demanded that the results of the inquiry are made public before the next general election, due in 2024.

The Government’s long awaited Covid inquiry is set to examine a multitude of facets of the pandemic with a draft list of topics including the ‘preparedness, capacity and resilience’ of the NHS, the safeguarding of public funds and PPE procurement 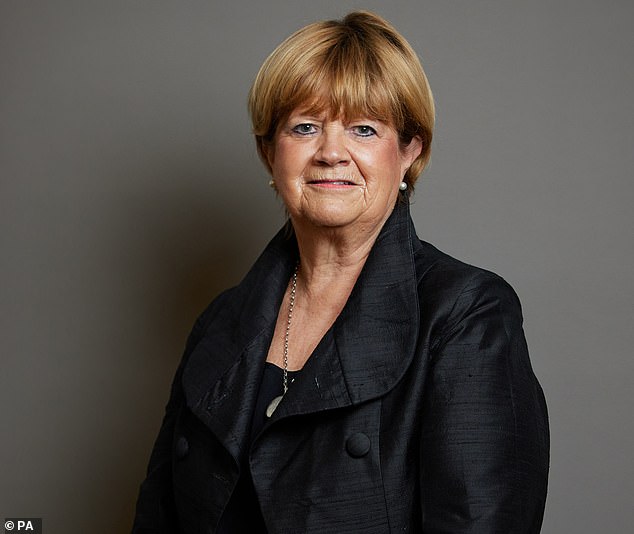 The Cabinet Office said the main role of the inquiry is to identify lessons that can to be learned about the Covid response so it can inform the UK’s preparations for future pandemics.

There will now be a further public consultation of about four weeks led by the Baroness to consider any changes to the terms before they are finalised.

Baroness Hallett said: ‘This consultation is independent of the Government and an opportunity for everyone across the UK to give me their views on what the inquiry should investigate.

Baroness Heather Hallett: A retired Court of Appeal judge who is no stranger to high profile inquests and inquiries

Baroness Heather Hallett is no stranger to taking charge of high profile inquests and inquiries.

The 71-year-old former Court of Appeal judge has been entrusted by Boris Johnson with chairing the long-awaited public probe into the coronavirus crisis.

Her handling of the inquiry will be subject to ferocious scrutiny.

But Baroness Hallett, who retired from the Court of Appeal in 2019, has experience of operating in the public eye.

She is currently acting as the coroner in the inquest into the death of Dawn Sturgess who died in July 2018 following exposure to the nerve agent Novichok.

A new chair for that inquiry is expected to be appointed early in the new year.

She previously acted as the coroner for the inquests into the deaths of the 52 victims of the July 7, 2005 London bombings.

She also chaired the Iraq Fatalities Investigations as well as the 2014 Hallett Review of the administrative scheme to deal with ‘on the runs’ in Northern Ireland.

Baroness Hallett was nominated for a life peerage in 2019 as part of Theresa May’s resignation honours.

The married mother-of-two joined the House of Lords as a crossbench life peer.

‘I should like to hear views on the draft terms of reference from all those who have been particularly affected by the Covid pandemic, especially people who have been bereaved, experienced hardship or suffered other harm.’

Liberal Democrat MP Layla Moran who is chair of the All-Party Parliamentary Group on Coronavirus called for the findings to be made public ahead of the next election.

‘To ensure public confidence in this inquiry, it is imperative that the government is transparent in appointing its members, that the public consultation is broad and that crucially, findings from the interim report are delivered before the next general election.’

Becky Kummer, spokesperson for the campaign group Covid-19 Bereaved Families for Justice, said: ‘The inquiry is a one-off and historic opportunity for the terrible suffering and loss of the past two years to be learned from, to ensure these tragedies are not repeated in the future.

‘Sadly, today’s announcement comes far too late. We will never know how many lives could have been saved had the Government had a rapid review phase in Summer 2020, as we called for at the time.’

Ms Kummer called for Mr Johnson to commit to implementing the chair’s recommendations for the terms of reference in full to avoid risking its credibility.

‘The fact his office is under police investigation for breaching their own rules means that if he attempts to interfere with what the inquiry looks into, it risks ruining its credibility before it’s even begun,’ she said.

NHS Providers also welcomed the inquiry, with its chief executive Chris Hopson saying while there was much the health service did well during the pandemic, there would obviously be lessons to be learned.

‘We know that while there is much the NHS did well during the pandemic, it is right that the inquiry looks at areas where there were major challenges such as infection prevention and control, access to PPE, testing and robust epidemiological modelling,’ he added.

‘We are also pleased the draft terms indicate that the inquiry will explore the nation’s preparedness, initial capacity, and resilience ahead of, and during the pandemic, and the important focus on inequalities.’

Mr Hopson added that families who lost loved ones and NHS staff who worked tirelessly throughout Covid deserved fair scrutiny into the pandemic and the response of the health and social care sector.

The announcement inquiry’s scope comes amid a Covid resurgence outbreak with cases and hospital admissions rising once more according to the latest data. 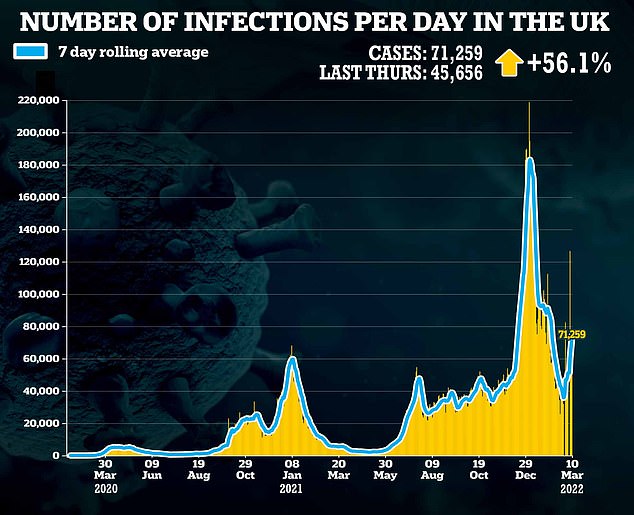 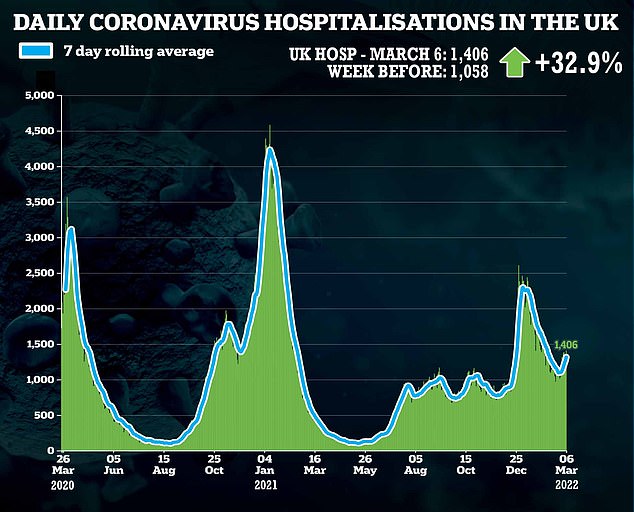 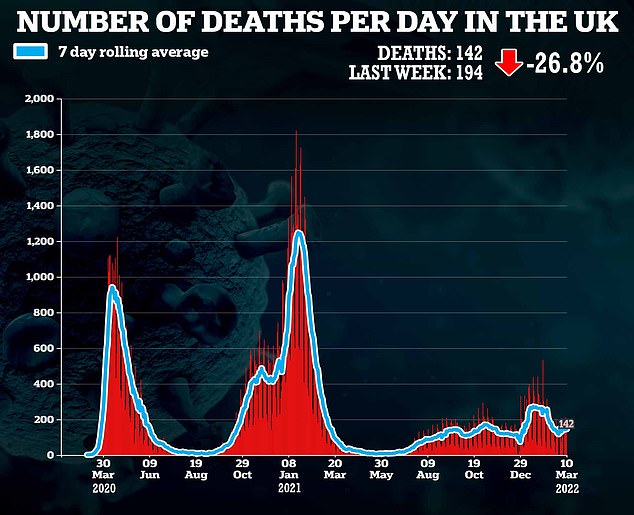 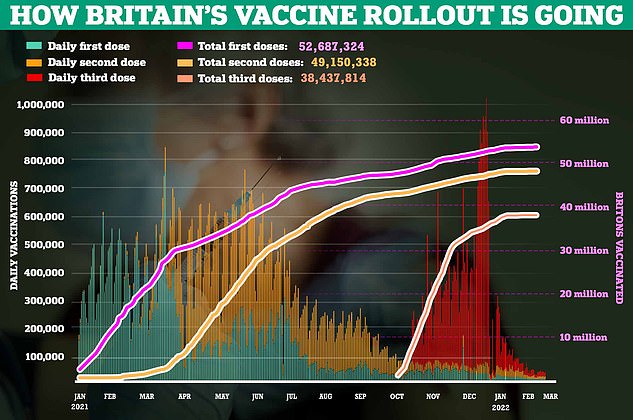 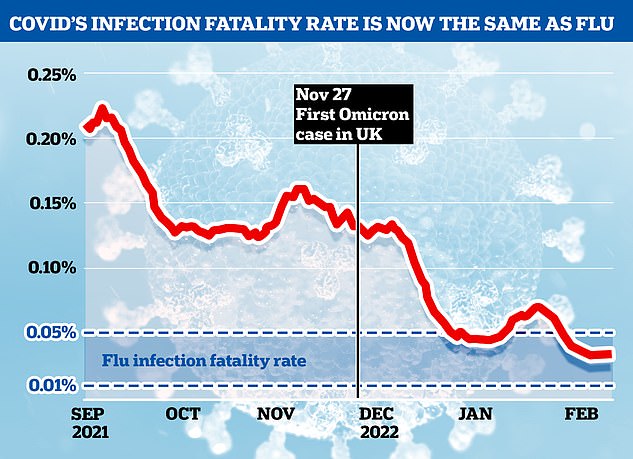 The above graph shows the infection fatality rate for Covid in England (red line). Since Omicron became dominant in the UK it has dropped dramatically and is now around the same level as flu (blue area). Scientists today said it was certainly possible that Covid is now as deadly as flu. But they warned future variants could change the calculation

Government dashboard data shows there were 71,259 infections confirmed over the past 24 hours, the highest in over a month and up 56 per cent on last Thursday.

Cases have been climbing for over a week, with the trend thought to be down to a combination of lifting the final restrictions in England and the rise of a more infectious version of Omicron.

Latest hospital data shows there were 1,406 virus admissions on March 6, up a third on the previous week and the seventh day in a row they have risen week-on-week.

Experts have suggested it may be the early signs of booster vaccine immunity waning, following the initial roll out in September.

But every increase in cases has always led to a spike in admissions, although a large proportion are simply labelled ‘incidental’.