Noah Cyrus surely knows how to find the humor in dire situations, including messy, public breakups — as evidenced by her recent decision to offer up a bottle of her own tears online.

The singer, Miley Cyrus’ 18-year-old sister, collaborated with an online retailer to sell a special collection available for 48 hours, which debuted on Thursday.

Noah’s line includes a bottle with a tag that reads ‘Noah Cyrus tears’, which is sold as a joke on the platform for a hypothetical — and whopping — prize of $12,000.

What a bargain! Noah Cyrus has put a bottle of her own ‘tears’ up for sale online, at a whopping price of $12,000

A description of the item on Pizzaslime, the online retailer that carries the line, reads: ‘This is approximately 12 tears made by Noah Cyrus as a result of sadness’. 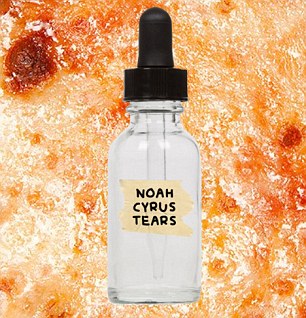 Joke: The singer’s team says people who go through with the purchase will be refunded and won’t receive a bottle

‘Human digestion of these tears is not suggested cause tears are generally pretty salty and that would just be super f*****g weird if you drank someone else’s tears,’ the rest of the description states.

After the bottle of Noah’s tears made its online debut, someone created a Go Fund Me claiming to be a smitten fan of the singer and asking others to pitch in and help them purchase the bottle.

Noah’s team told TMZ back when the page was still up that they were going to reach out to Go Fund Me to ask them to delete the campaign, adding that they would reimburse the people who had donated and offer them backstage passes to one of the singer’s shows.

Pitch: A description of the item on Pizzaslime, the online retailer that carries the line, reads: ‘This is approximately 12 tears made by Noah Cyrus as a result of sadness’

Noah’s team also told the website that people who actually go through with the purchase of Noah’s tears on Pizzaslime will be refunded and will not receive a bottle.

The see-through container, which comes with a dropper, is for sale alongside hoodies that read ‘Noah Cyrus sucks’, ‘sadness’, and ‘Sry I’m trash’.

Noah’s collection also includes T-shirts with a photo of her father Billy Ray Cyrus, 57, doctored to make it look as though Billy has face tattoos — a look favored by Noah’s recent ex, 22-year-old rapper Lil Xan.

The singer unveiled the items ahead of her the release of her new EP, which is aptly named Good Cry and debuted on Friday.

Noah announced the release of Good Cry earlier this month, saying she named it ‘appropriately’ in the wake of her recent breakup with Lil Xan.

She and Lil Xan split at the beginning of the month amid a very public riff, which began when Lil Xan took to Instagram and accused Noah of cheating on him. 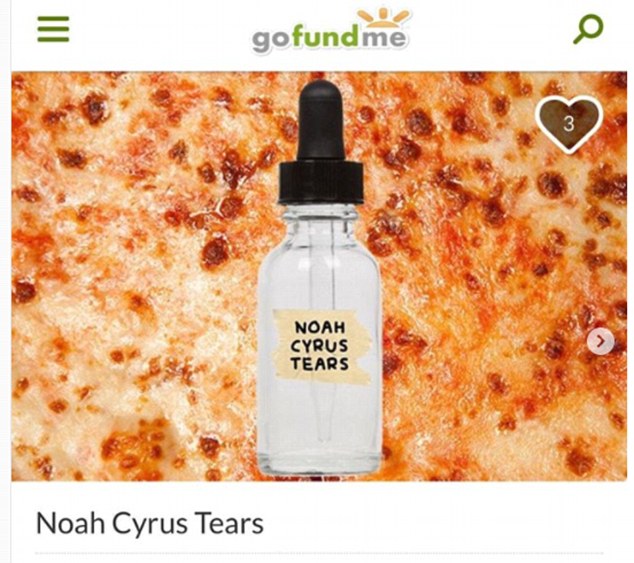 Funds: Someone created a Go Fund Me claiming to be a smitten fan of the singer and asking others to pitch in and help them purchase the bottle. The campaign has been taken down 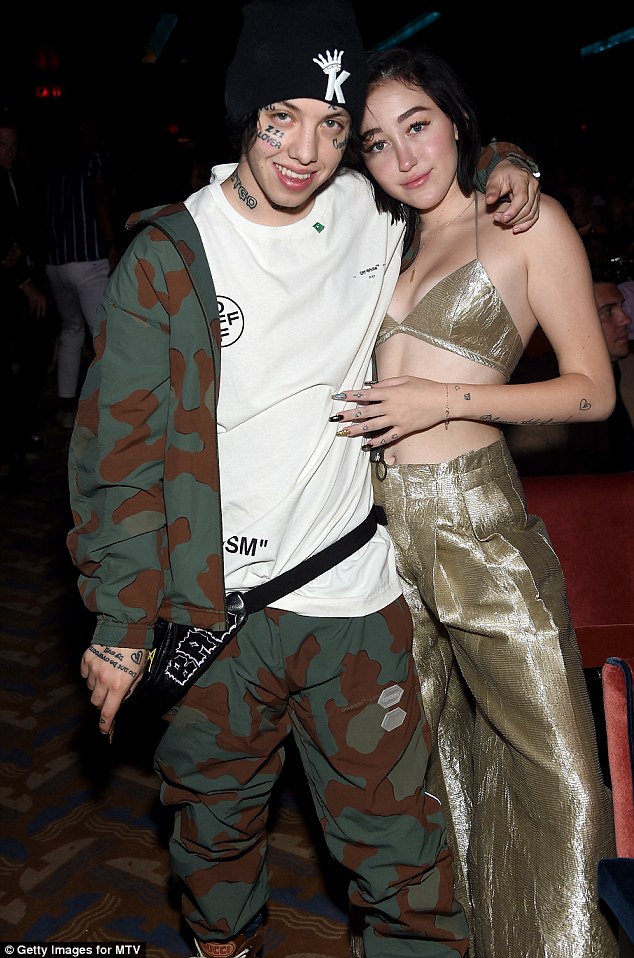 Split: Noah, 18, and Lil Xan, 22 (pictured together in August) went through a public, messy break-up earlier this month and accused each other of cheating

He eventually said that what led him to believe his girlfriend of a few months was being unfaithful was a photo she had shared of herself with a music producer, in which she has her hand on his shoulder and her arm around his neck.

‘This is the picture, call me whatever but if you my girl you ain’t touching no dude like that sorry aha,’ Lil Xan wrote in a now-defunct post on his Instagram Story.

In an earlier update, Lil Xan had said in another post that he felt he was ‘probably being cheated on’.

Noah adamantly denied cheating on her boyfriend and instead accused him of being unfaithful.

On her own Instagram Story, she shared a photo in which Lil Xan appears to have a red mark on his neck, saying a fan had tagged her in it.

‘Cheaters like to accuse their partners of cheating to make themselves feel less guilt,’ she wrote. ‘This isn’t the first time this has happened to me and now I’m being forced to deal with crazy accusations when I’m not even sure where all this came from.’