Non-stop flights between London and Sydney could be closer to take off after aircraft manufacturers reportedly met with Qantas officials to discuss which ultra-long-range jets could carry out the job.

The airline has previously said it is working to close the ‘tyranny of distance’ between Australian cities on the east coast and global financial centres such as the British capital by 2022.

The Australian flag carrier has been considering an order for jets to carry out the service, which is expected to take 20 hours and 20 minutes.

Non-stop flights between Sydney and London appear to be a step closer after Qantas bosses meet with officials from aircraft makers Boeing and Airbus. Pictured is a Qantas 787 Dreamliner, which is currently flown on the Perth to London route, which began in March

And according to the Sydney Morning Herald, senior executives from both Boeing and Airbus were in Sydney last week to pitch their aircraft to airline bosses.

It is believed that Boeing’s 777X-8 model, which is still under development, could be capable of carrying out the long flight as well as a version of the Airbus A350-1000, which entered service in February.

Qantas has not announced how many ultra-long haul jets it will order, but CEO Alan Joyce previously said it could be a ‘reasonable-sized fleet’ given that potential routes include Sydney, Melbourne and Brisbane to London, New York and Paris or Frankfurt.

Ultra-long-haul flights are aimed primarily at business travellers and can allow airlines to charge a 20 per cent premium over one-stop rivals, according to industry data.

Airbus’s first customer for the ultra-long-range A350-900ULR, Singapore Airlines, launched 19-hour flights from Singapore to New York in October, which is the longest commercial flight in the world.

It ordered seven of the jets, which carry more fuel than a typical A350-900. 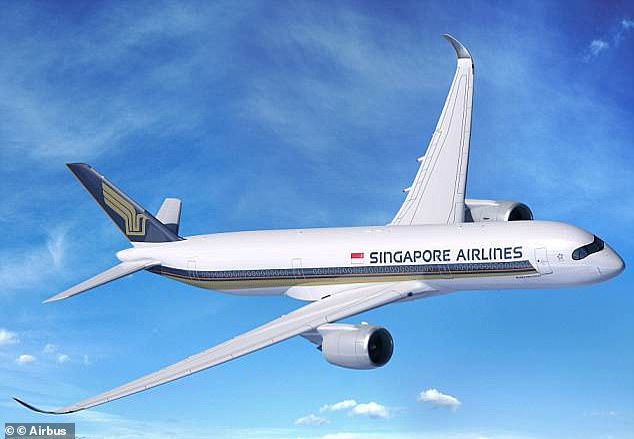 Airbus is already developing a range of ultra-long-range jets. The first customer for its A350-900ULR model is Singapore Airlines, which use the aircraft on its Singapore to New York route – the world’s longest commercial flight

Sydney to London is an even more demanding journey and Qantas wants to do it with more passengers than the 161 business and premium economy seats that Singapore Airlines plans to use on its ultra-long haul routes.

But as planemakers look to modify designs, airports are also looking to adapt facilities.

Qantas offers pre-flight yoga classes to Perth-to-London passengers in its lounge and has adapted its menu in all classes.

The Perth to London route has sold better than expected, particularly in premium cabins. It is operated on a Boeing 787 Dreamliner.

He explained: ‘At the moment, 70 per cent of the world’s population is reachable from Sydney on one direct flight. 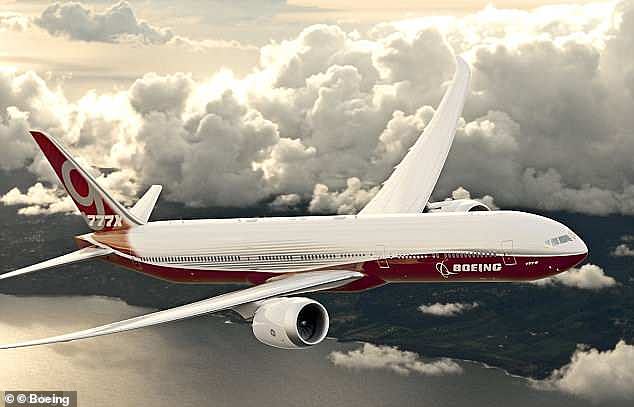 A rendering of a Boeing 777X long range aircraft. Qantas could purchase this model for its ultra-long-haul fleet

‘Once those aircraft come to market the entire population of the world will be reachable in one flight. It is just an amazing step change in aviation.’

However, despite Qantas working on delivering non-stop flights between Australia and the UK, it appears British Airways are not considering launching similar routes.

In June, Willie Walsh, the CEO of BA’s parent company IAG, ruled out the carrier flying non-stop to Sydney.

Mr Walsh said: ‘Code sharing is an option but in terms of using our metal, we’re not considering it.

‘Personally the idea of sitting on an aircraft for 21 hours to get from Heathrow to Sydney, it does not appeal to me.’

This appears to mean that in the future, passengers flying BA to destinations in Australia will still have to stop off in Singapore or Hong Kong.

Only Australian and British carriers have the rights to fly non-stop flights between the UK and Australia.