Nordstrom has come under fire for selling a pair of $530 sneakers made to look held together with tape — a design that has caused many to accuse the retailer of trying to turn poverty into a fashion statement.

The sneakers, which were created by the luxury fashion brand Golden Goose, feature mock tape around the shoe’s toes, making it look as though they were so distressed the owner didn’t have any other option but to tape them back together haphazardly.

Many were shocked by the design, with some pointing out that it glamorizes something that people who live in poverty have to go through — not by choice, but by necessity.

Backlash: Nordstrom has come under fire on social media for selling these sneakers, which were created by Italian brand Golden Goose and look like they’re held together with tape 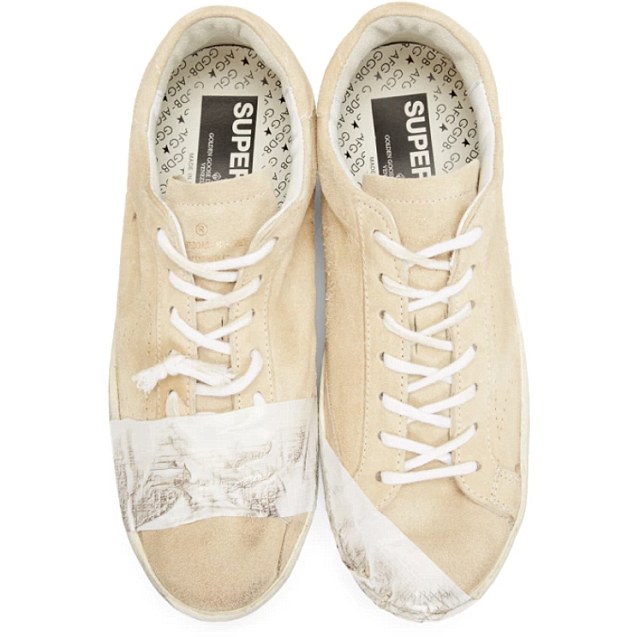 ‘Insensitive’: Many people were shocked by what they saw as an attempt to turn poverty into a fashion statement 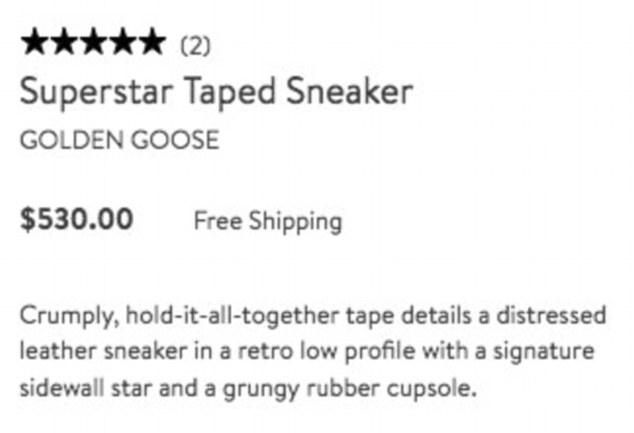 ‘Retro’: On Nordstrom’s website, the shoe’s description made mention of ‘crumply, hold-it-together tape’ that ‘details a distressed leather sneaker in a retro low profile’

While the design is currently sold out on Nordstrom’s website, its original price — $530 — added to the outrage and led one Twitter user to declare that ‘rich people are the worst’.

Barneys and Neiman Marcus also carry some of Golden Goose’s designs, but the taped sneakers are currently not available on their websites.

Twitter users took to the platform to protest against the design.

One person called the shoes ‘another piece of fashion that looks like something I was made fun of for having to do’, adding: ‘Must be nice, thinking being poor is fashionable…’

‘WTF this is unbelievable, this is poking fun at low-income families and the homeless people,’ another Twitter user wrote. ‘Do these idiots know what it’s like to be living in poverty. I can just imagine who would get this.’ 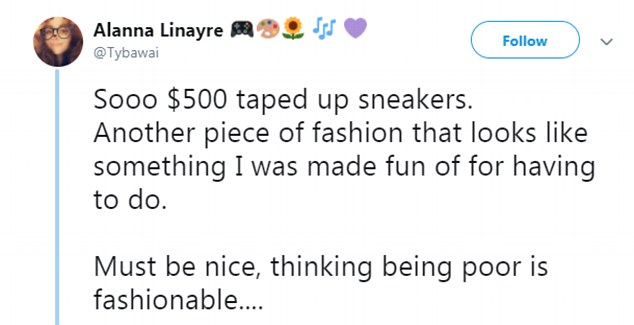 Speaking out: Twitter users took to the platform to protest against the design, including one person who wrote: ‘Must be nice, thinking being poor is fashionable…’

Can’t believe it: Several people pointed out that the design glamorizes something that people who live in poverty have to go through — not by choice, but by necessity 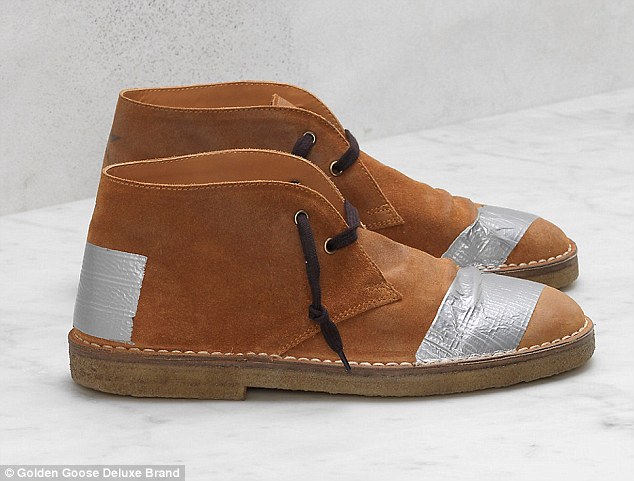 Collection: Golden Goose is currently offering a similar design on its website, in the shape of a $530 pair of suede boots with tape at the front and back (pictured)

On Nordstrom’s website, the shoe’s description made mention of ‘crumply, hold-it-together tape’ that ‘details a distressed leather sneaker in a retro low profile with a signature sidewall star and a grungy rubber cupsole’.

That description added fuel to the fire for one Twitter user who wrote: ‘Just saw the taped sneakers that are trending and apparently poverty is considered “retro” now.’

‘We appreciate your feedback,’ the retailer wrote back. ‘We’re always looking to bring in new, different, and unique products. We realize taste is subjective and not every customer will like every product we carry. Rest assured your comments were shared with our teams. Thank you.’

Conversation: One Twitter user confronted Nordstrom, bashing the retailer for carrying the ‘awful’ and ‘insensitive’ design

Response: Nordstrom invoked ‘subjective’ tastes in its reply to the Twitter user 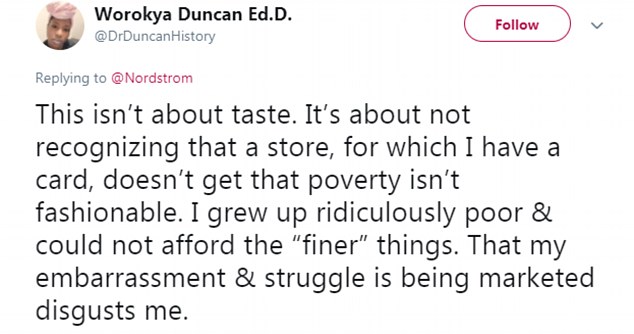 Not convinced: The Twitter user wasn’t satisfied with the retailer’s answer and responded back, saying her problem with the shoes wasn’t a matter of taste 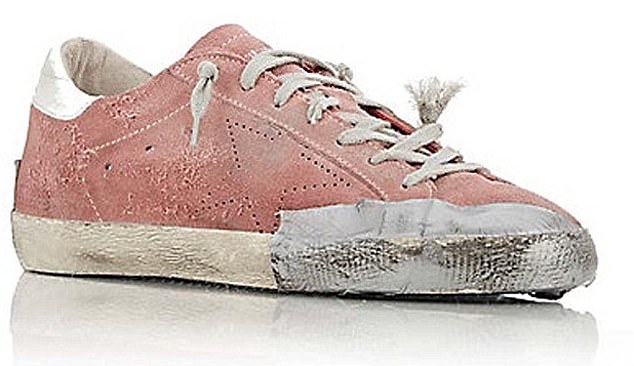 The Twitter user, however, replied back: ‘This isn’t about taste. It’s about not recognizing that a store, for which I have a card, doesn’t get that poverty isn’t fashionable. I grew up ridiculously poor & could not afford the “finer” things. That my embarrassment & struggle is being marketed disgusts me.’

Golden Goose has sold other distressed sneakers, though most models haven’t featured tape.

The Venice-based brand, which specifies on its websites that the shoes’ laces are ‘intentionally worn’ and that the sneakers are made of calf suede, also offers a $530 pair of suede boots with tape at the front and back of the shoes.

Back in 2016, the luxury designer launched a similar model of tape-up sneakers, this time in a shade of pink.

The brand attracted backlash too, with some accusing Golden Goose of ‘poverty appropriation’ — but the outrage didn’t deter the retailer from coming up with new versions of the design two years later.