Normani, Ashanti and Paula Patton light up the red carpet at the 2021 BET Soul Train Awards

BET’s 2021 Soul Train Awards was back with a bang on Saturday evening and held in-person at the famed Apollo Theatre in Harlem, New York.

Big names in Hip-Hop, R&B, Gospel, and Soul were pictured walking the red carpet including Ashanti and Normani, at the event which honors the best music artists of the year.

At the 2021 ceremony Ciara and Russell Wilson were named as Soul of Justice honorees along with Marley Dias, and the event is being hosted by Tisha Campbell and Tichina Arnold.

Normani, 25, — who was tapped to present at the event — heated up the red carpet in a figure hugging black dress with a midriff cutout.

The simple garment included a silver ring at the bust which drew attention to her cleavage and she wore her hair slicked back in a half ponytail.

Going glamorous for the evening, Ashanti, 41, modeled a billowing black ball gown that was embroidered with beads and lace flowers.

The strapless garment was one of the evening’s dressier looks and the Lady of Soul honoree — who will also perform at the event — accessorized with dangling leaf earrings.

Heating things up: Normani, 25, — who was tapped to present at the event — heated up the red carpet in a figure hugging black dress with a midriff cutout 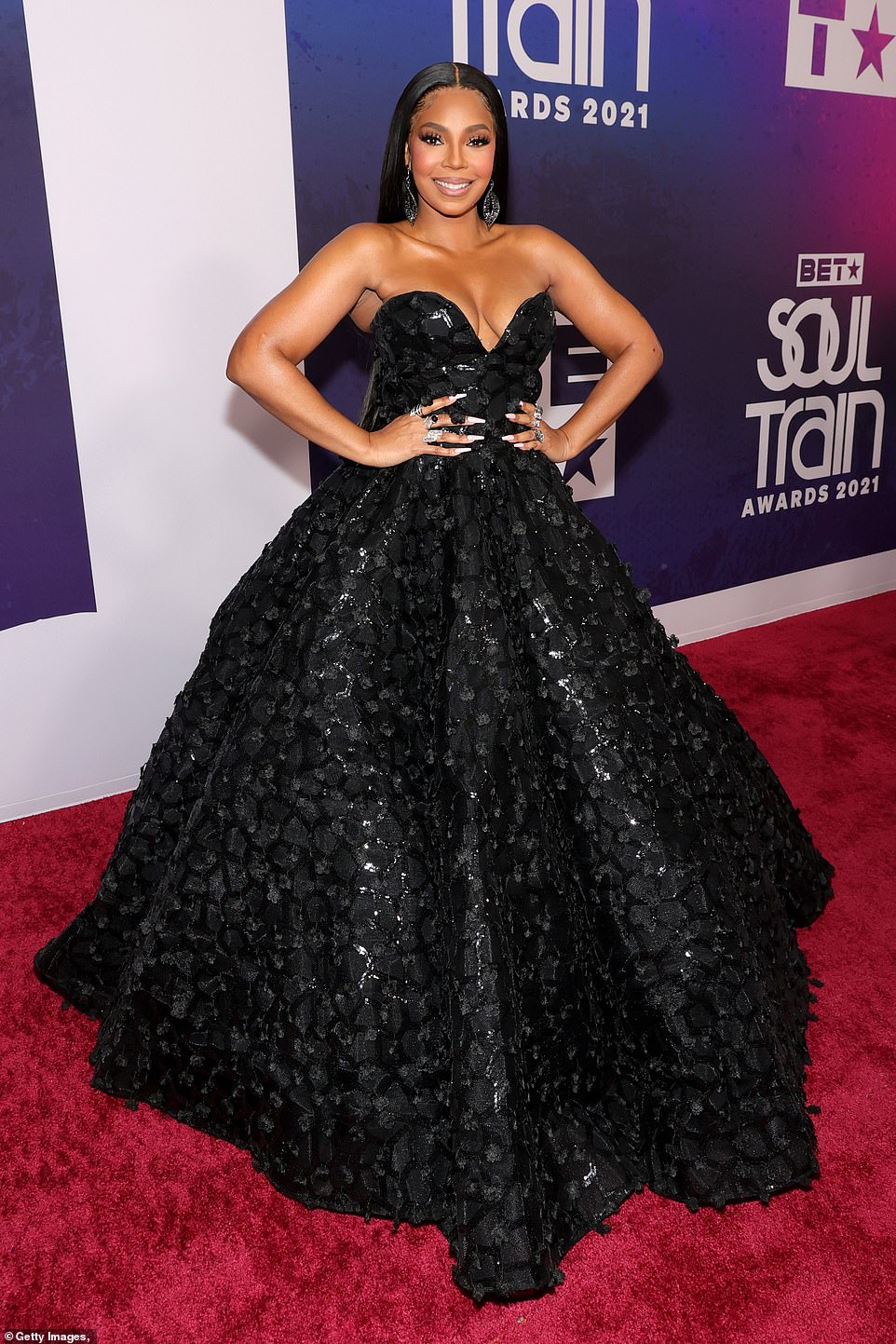 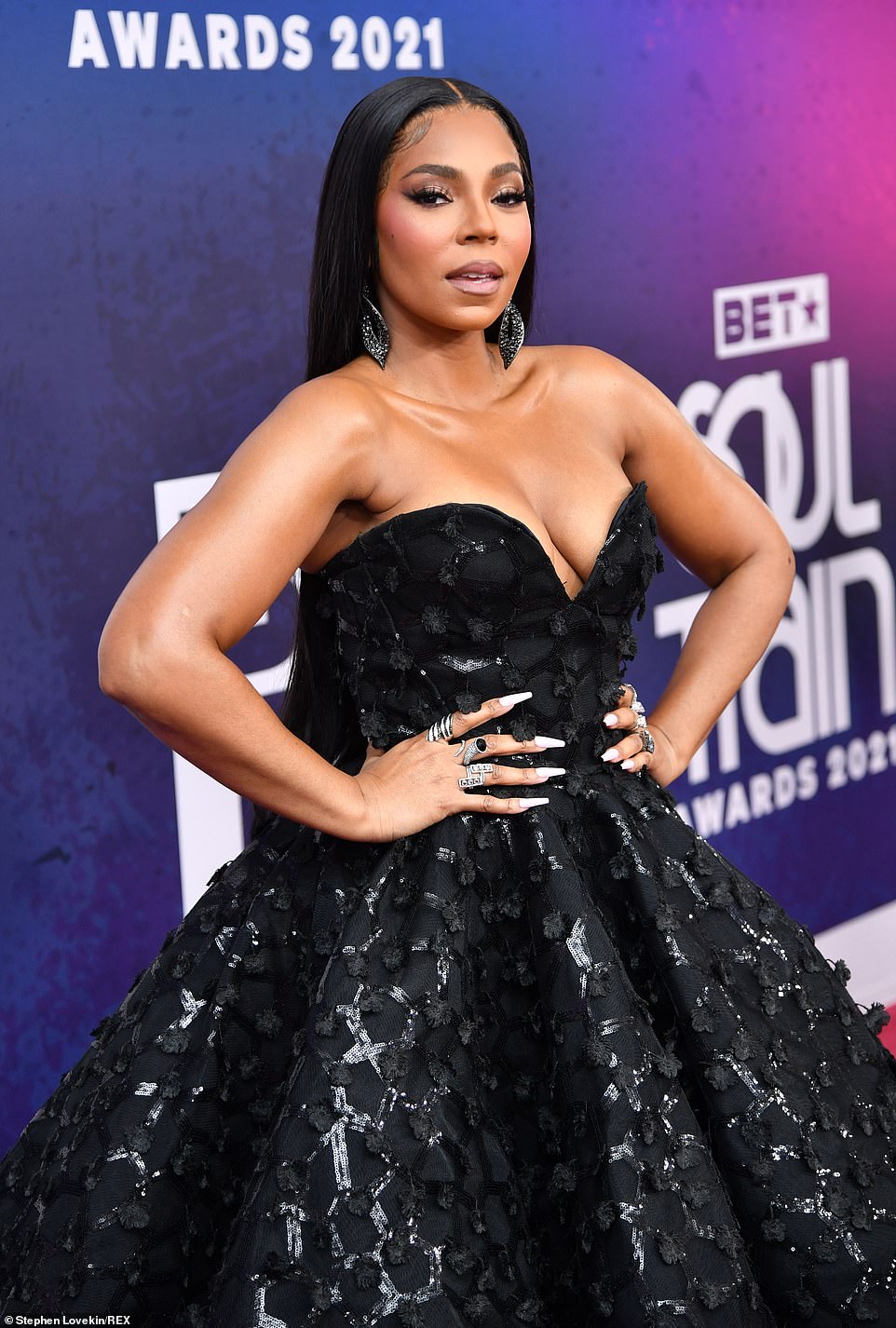 In her element: The famed R&B singer was honored with the Lady Of Soul award at the 2021 ceremony as well as being tapped to perform 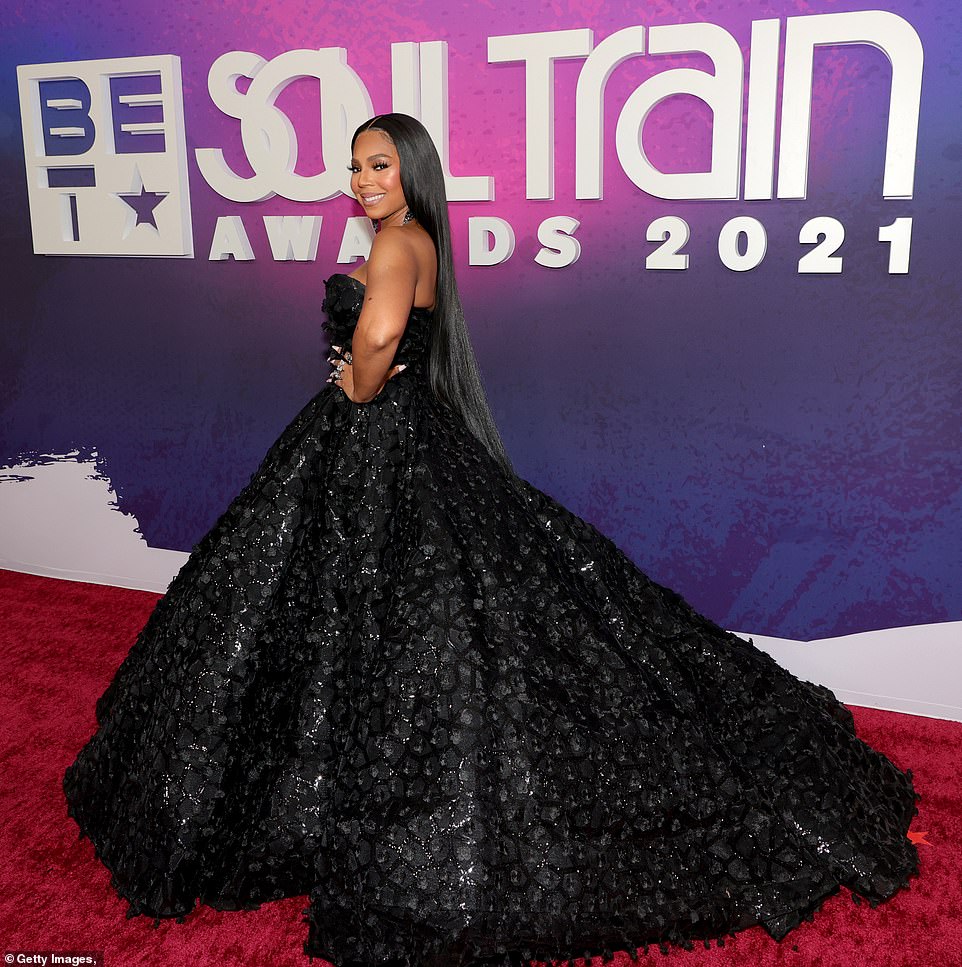 Big things: Ashanti is currently gearing up to release re-recordings of her early albums ala Taylor Swift, and additionally was announced as a recipient of a star on the Hollywood Walk of Fame in 2022 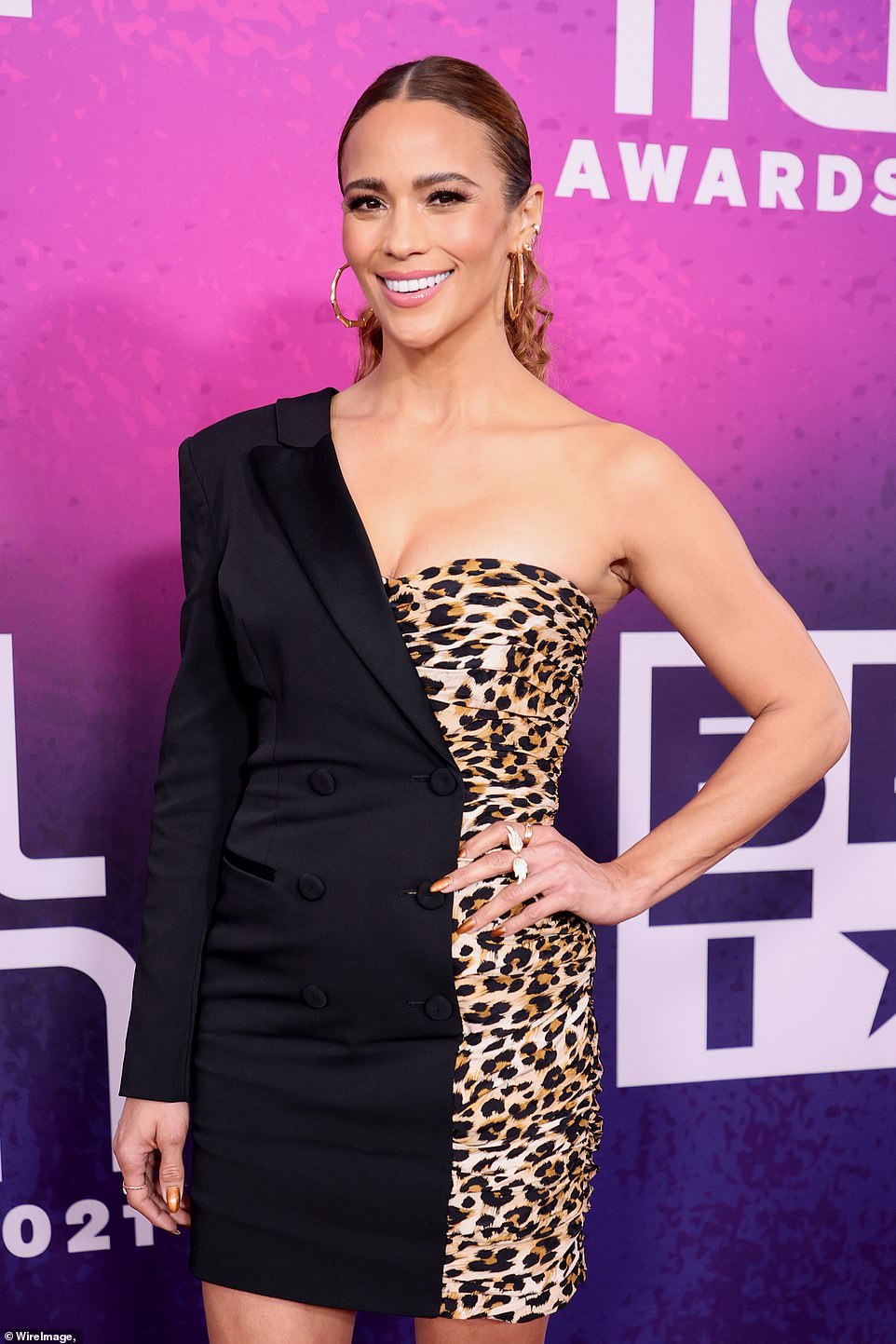 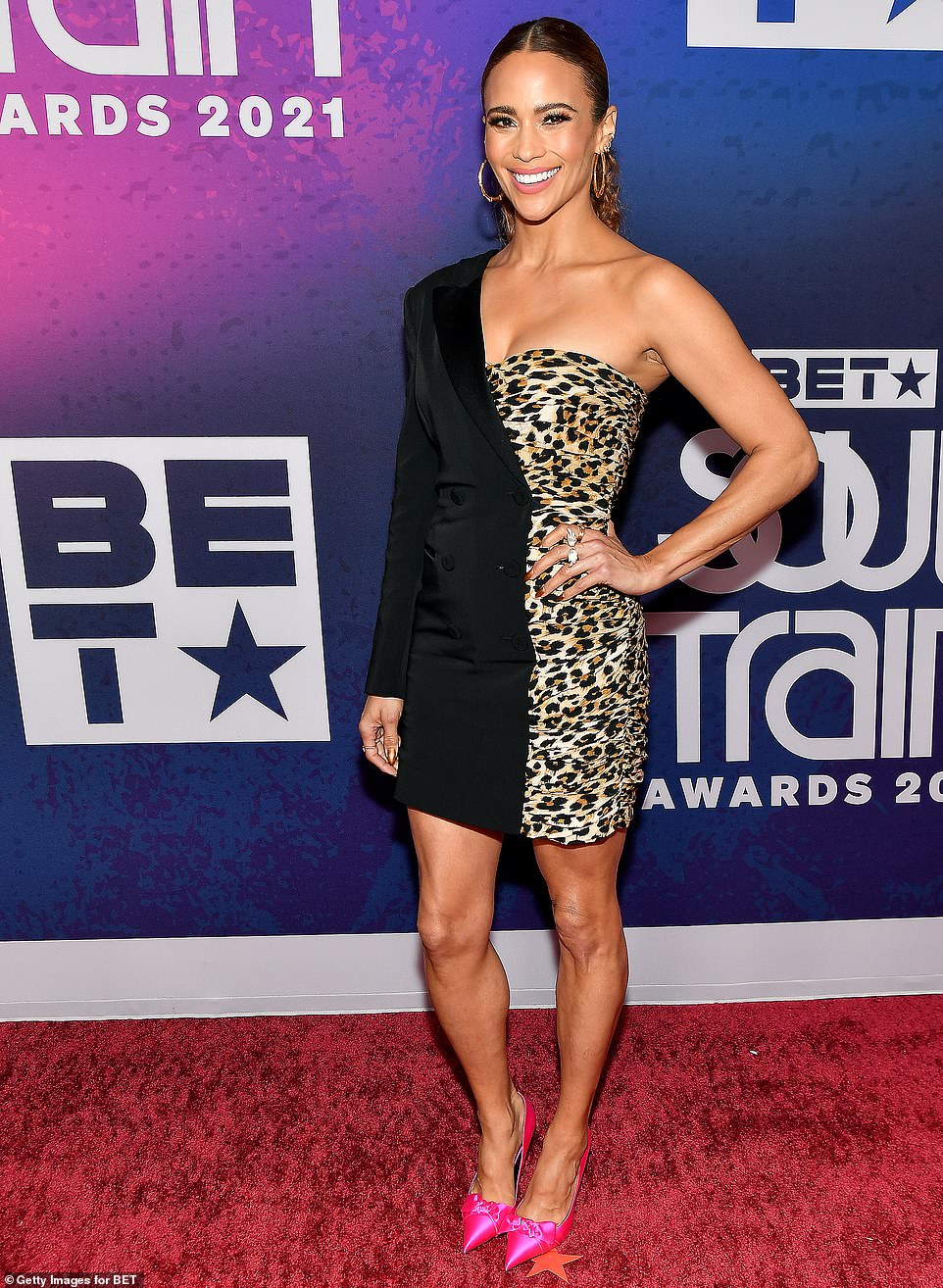 Unconventional: The star of the BET+ show Sacrifice served as a presenter at the event and paired her eye-catching mini dress with hot pink heels which accentuated her fantastic legs

Currently the Foolish singer is gearing up to release re-recordings of her early albums ala Taylor Swift, which caused her former label Murder Inc and CEO Irv Gotti to angrily assert ‘she is basically trying to f**k me out of my Masters.’

Additionally it was announced that the Grammy winning R&B singer would be a recipient of a star on the Hollywood Walk of Fame in 2022.

Robin Thicke’s ex wife Paula Patton, 45, went for an asymmetrical two-toned suit dress. One side was longsleeve and classic black while the other side was leopard print and strapless.

The star of the BET+ show Sacrifice served as a presenter at the event and paired her eye-catching mini dress with hot pink heels which accentuated her fantastic legs. 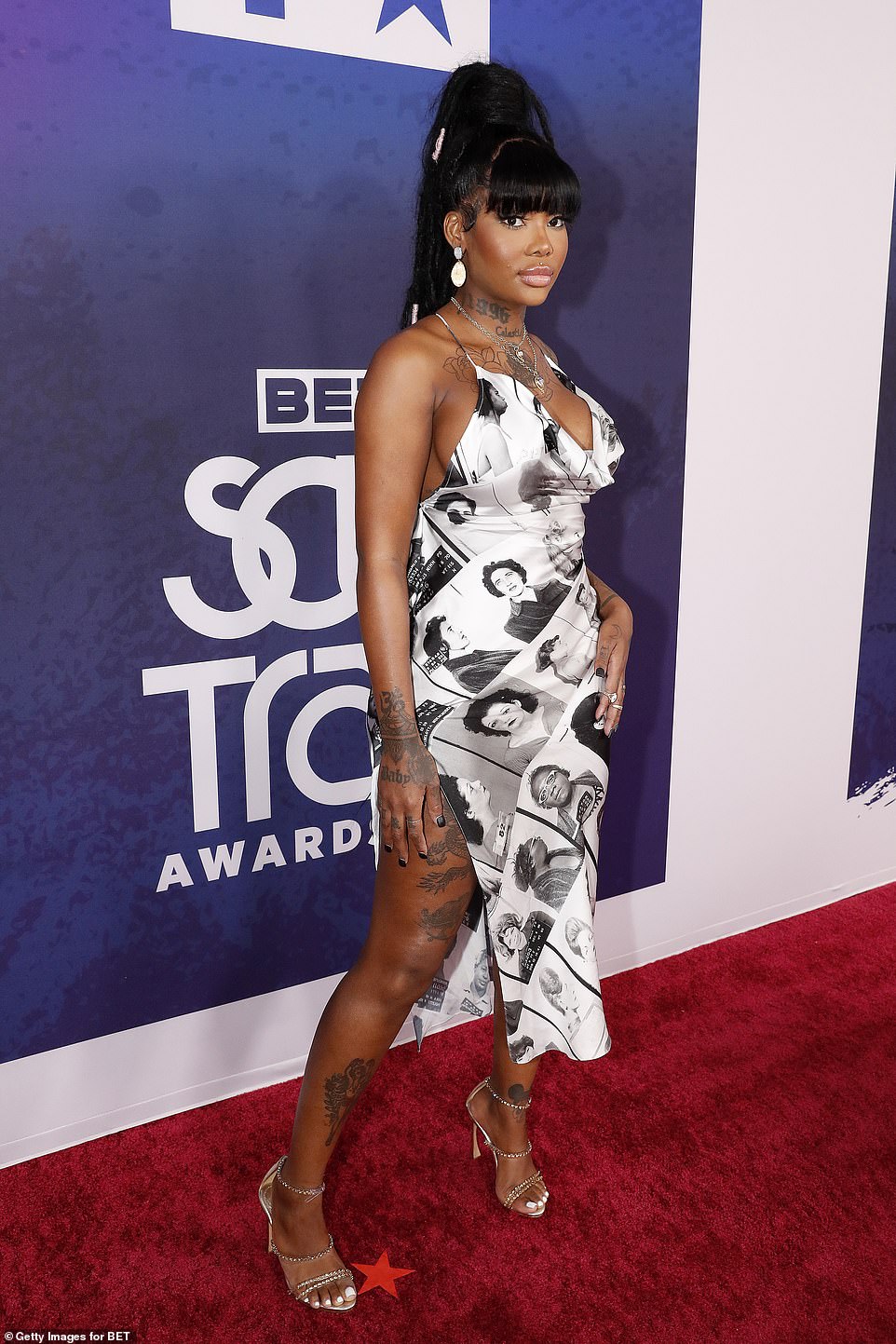 Performers: Both Summer Walker (left) and Ari Lennox (right) were tapped to perform at the event 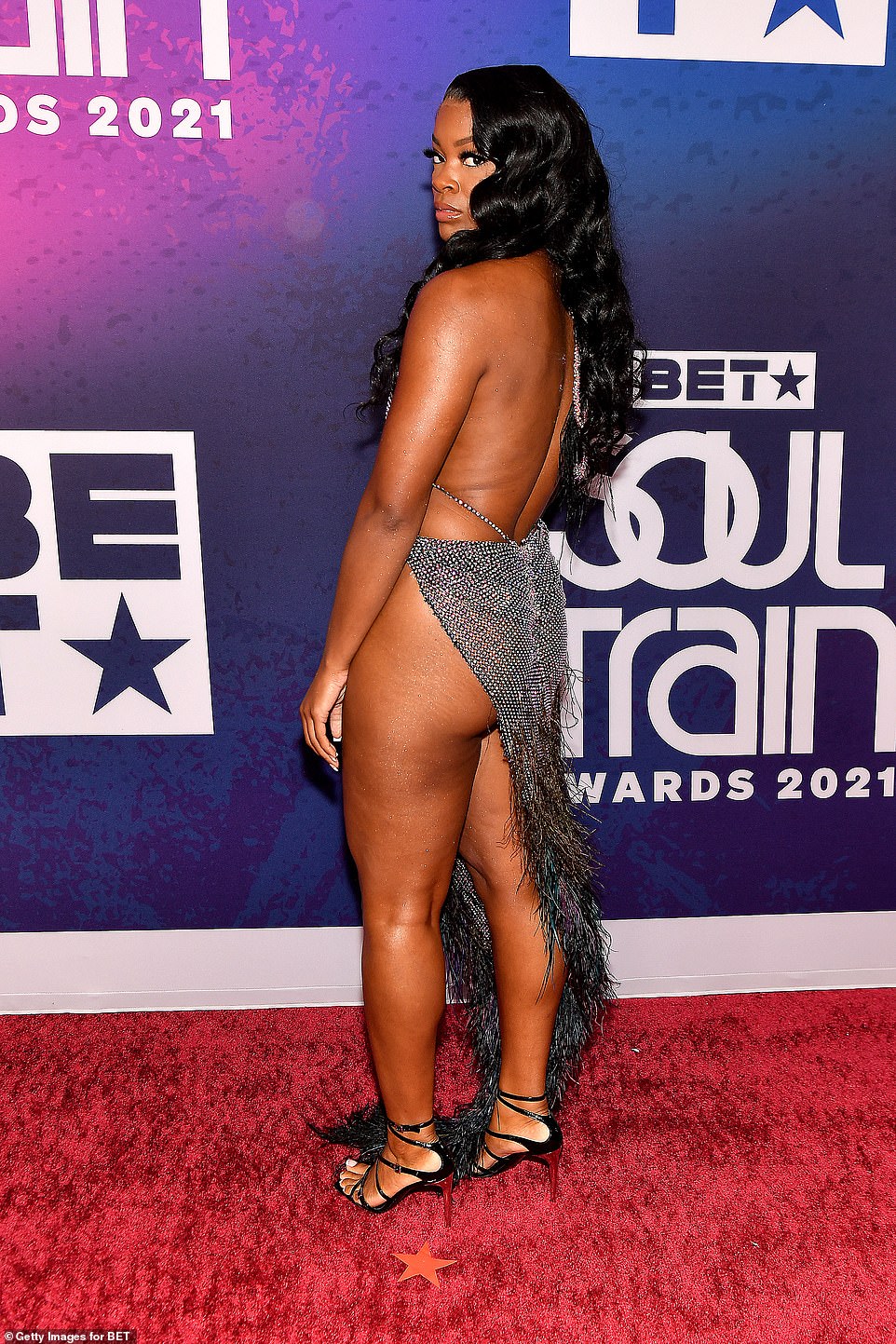 Her sophomore album Still Over It entered the Billboard 200 at No.1 this week and she is set to perform one of her hit tracks at the award show.

Additional performers pictured included Ari Lennox who went for a barely-there chain linked and feathered dress with a dramatic slit up the leg. 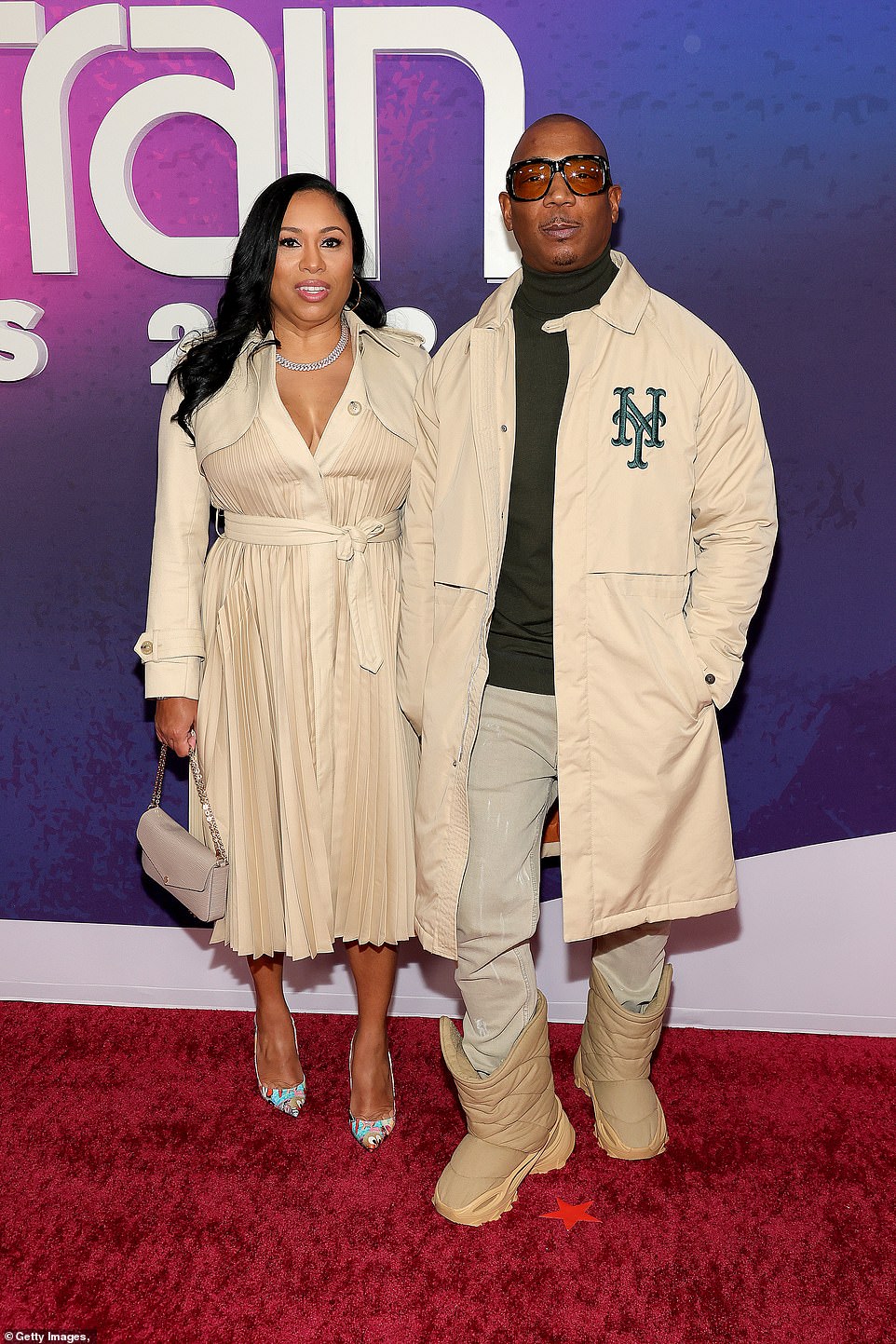 Legendary: Ja Rule was pictured at the ceremony with wife of 20 years Aisha Atkins 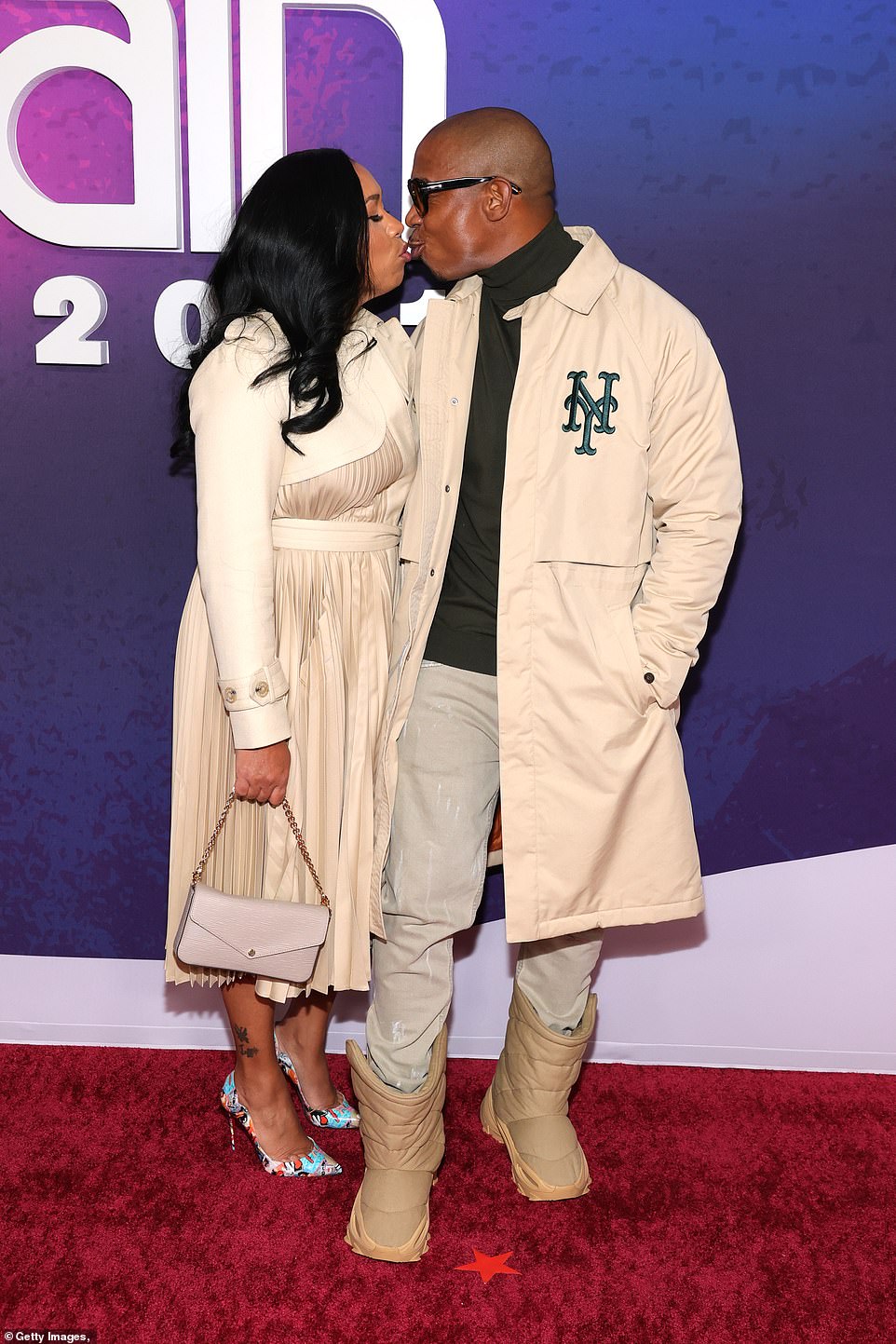 Loved up: The couple of two decades shared a sweet kiss and coordinated in tan colored outfits 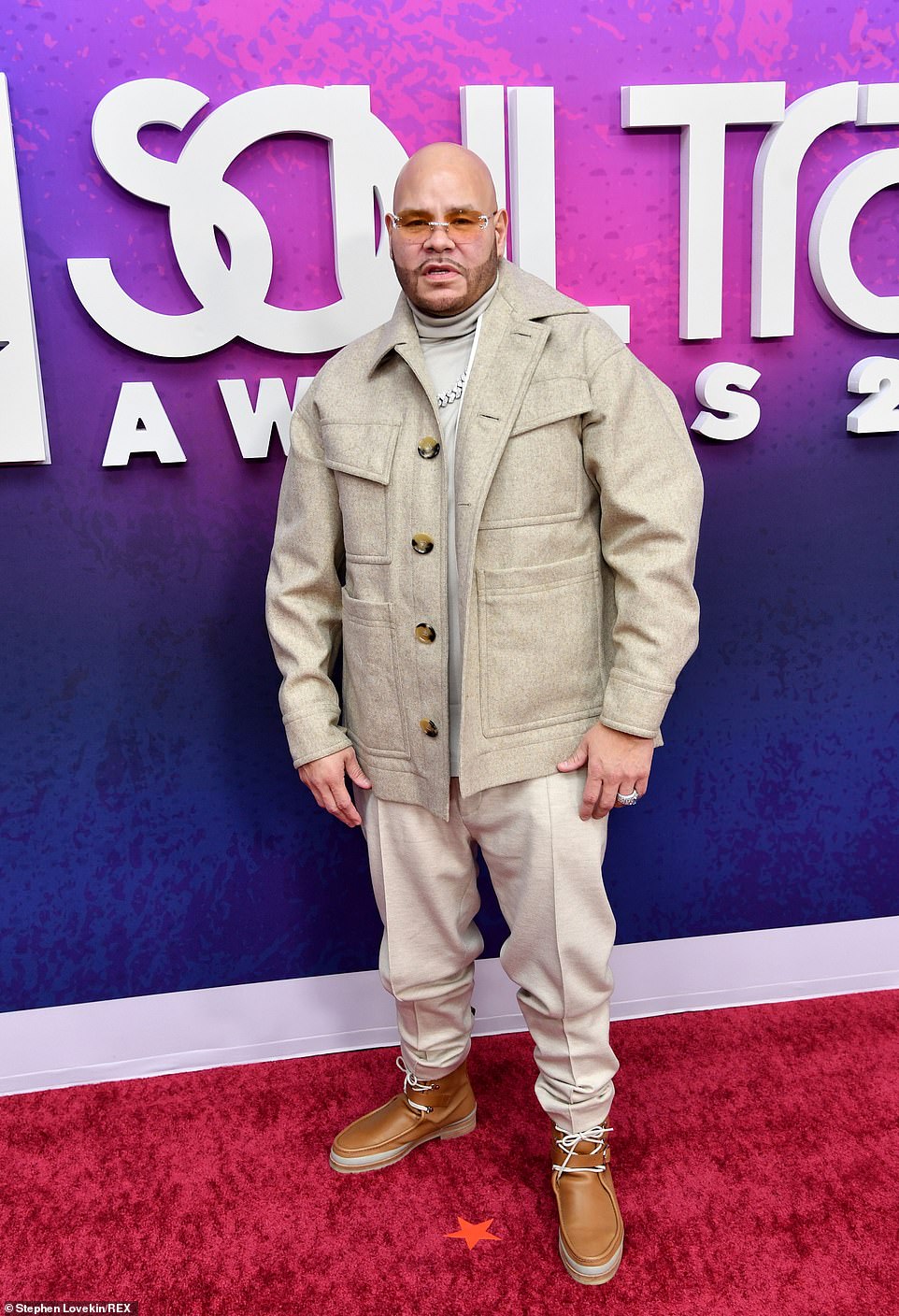 Still got it! Fat Joe was pictured in a very cool yet comfortable beige ensemble

The Soul Train Awards have been a celebration of Black excellence since it first aired on TV in 1987.

From 1995 to 2005 a separate award show named Lady of Soul Awards was held and exclusively honored female artists.

The original trophy for the awards featured an African ceremonial mask. It was redesigned in 2009 to emulate the program Soul Train’s mascot, which is an actual train.

Soul Train is the infamous music-dance television program which aired from 1971 to 2006. It was created by Don Cornelius who died in 2012 and will celebrate its 50th anniversary this year.

The subsequent award show based on the syndicated program has taken place every year except for 2008. 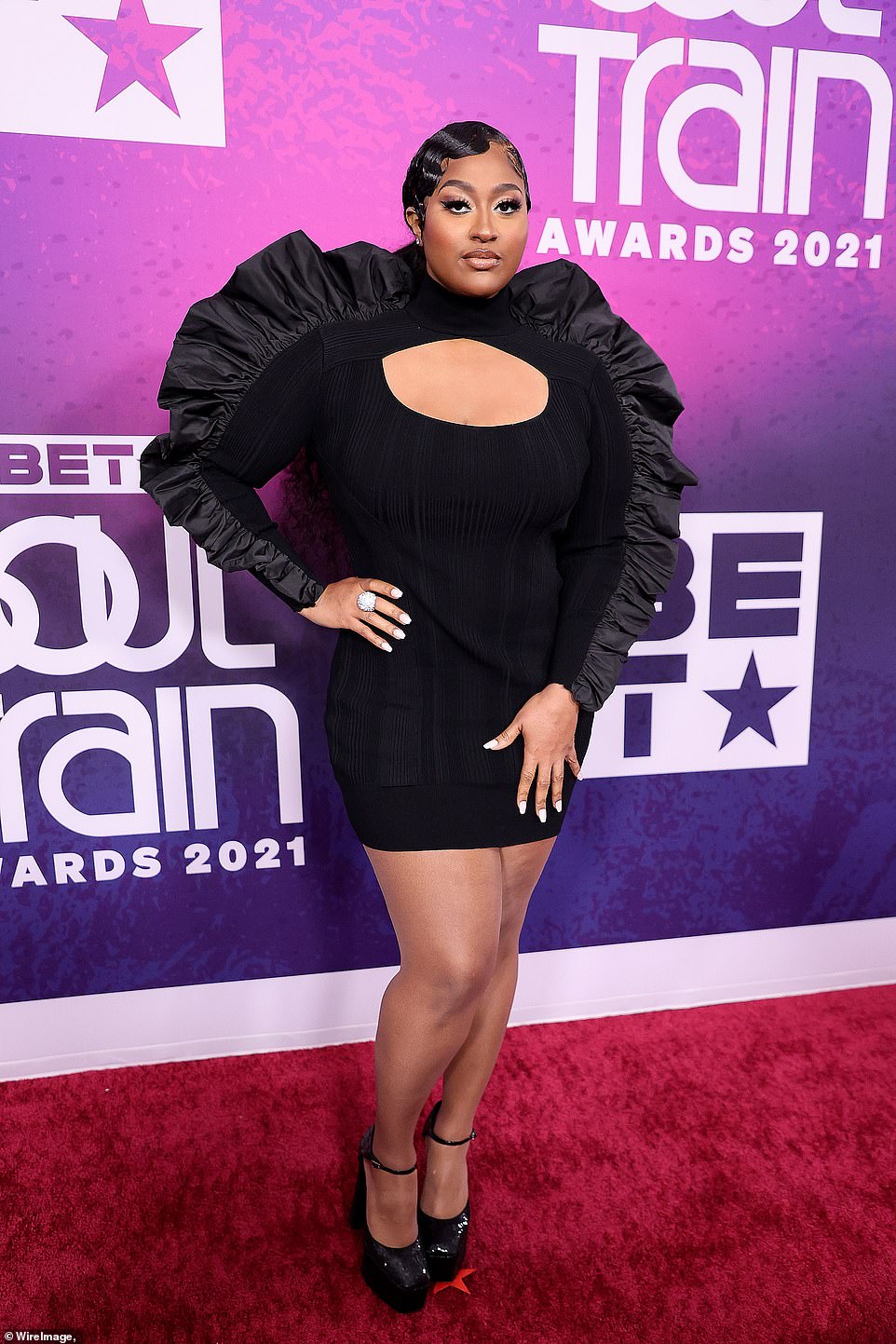 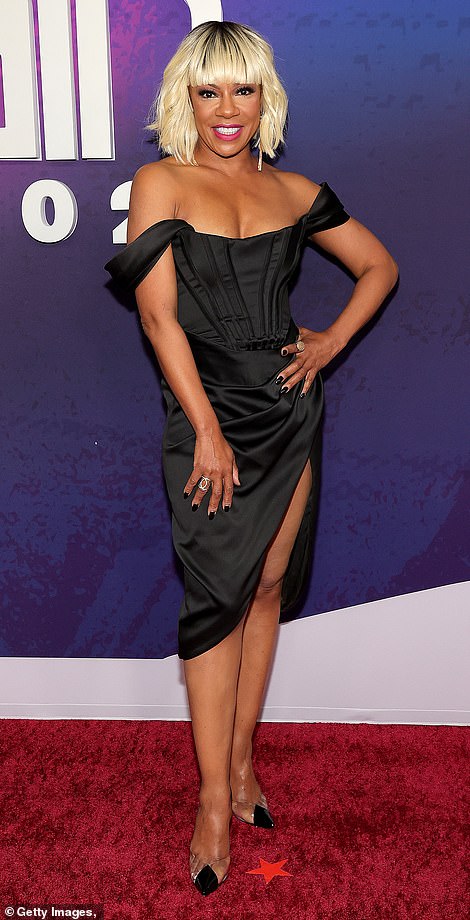 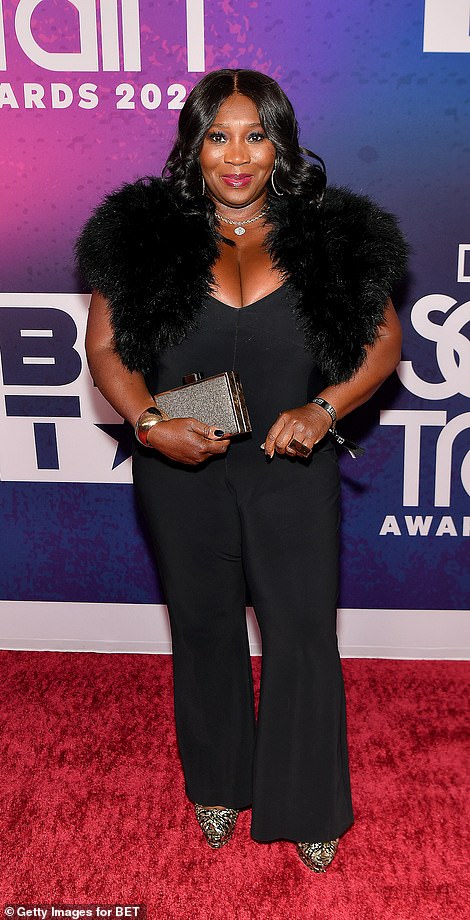 Factors leading to the 2008 ceremony’s cancellation included the Writers Guild of America strike, Cornelius’ health at the time, and Soul Train’s distributor Tribune Entertainment terminating operations after being sold to businessman Sam Zell.

The award show was held in the greater Los Angeles area for the first 22 years of its run until 2009 (at which point it began airing on BET) when it moved to Atlanta for a few years.

The 2020 ceremony was held virtually on account of the COVID-19 pandemic.

As this year’s show is back in person vaccinated individuals were eligible to be a part of the live show audience.

Strict COVID-19 guidelines including proof of vaccination and two days of mandatory for approved attendees. 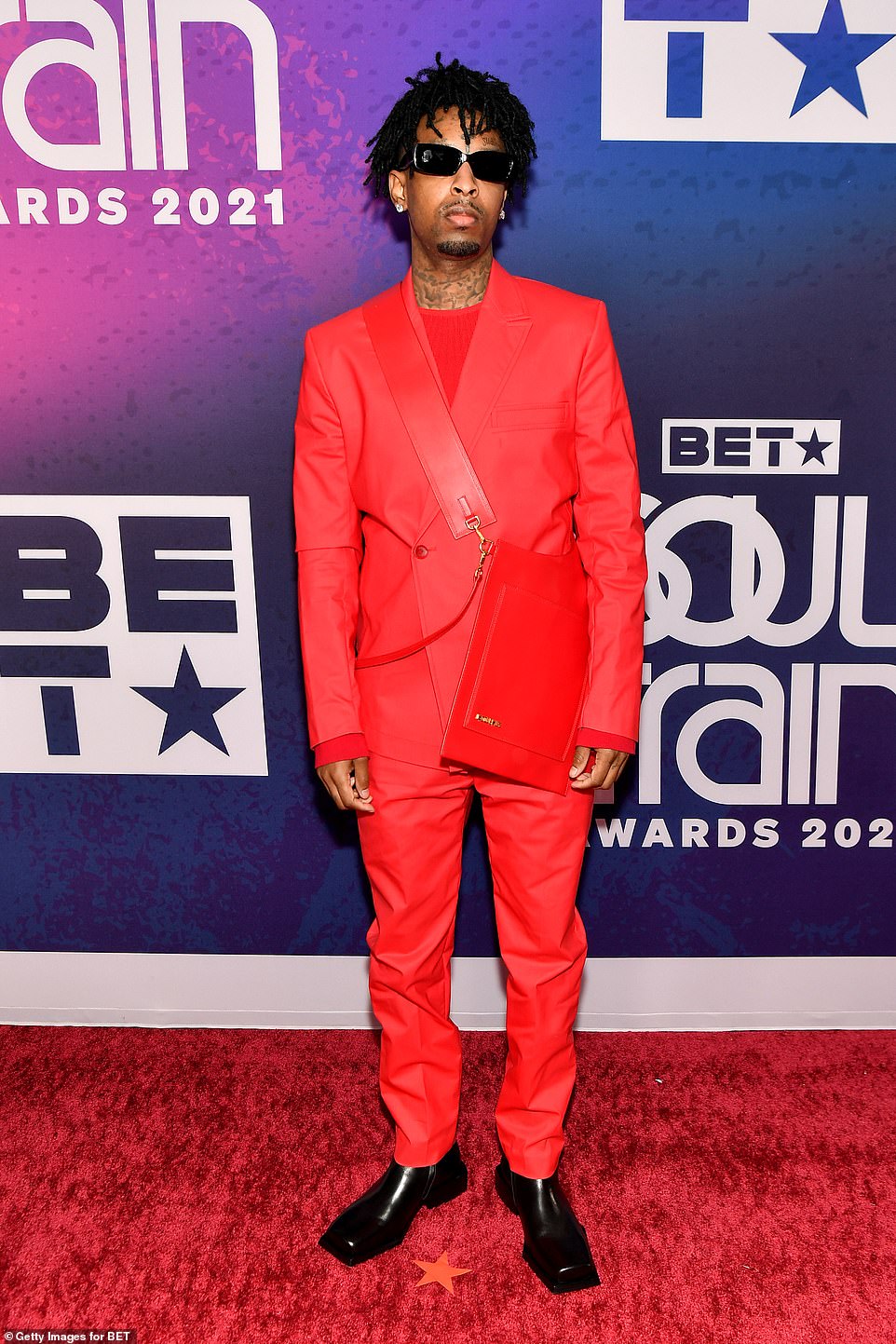 Seeing red: Rapper 21 savage stood out from a sea of black in a bright red suit 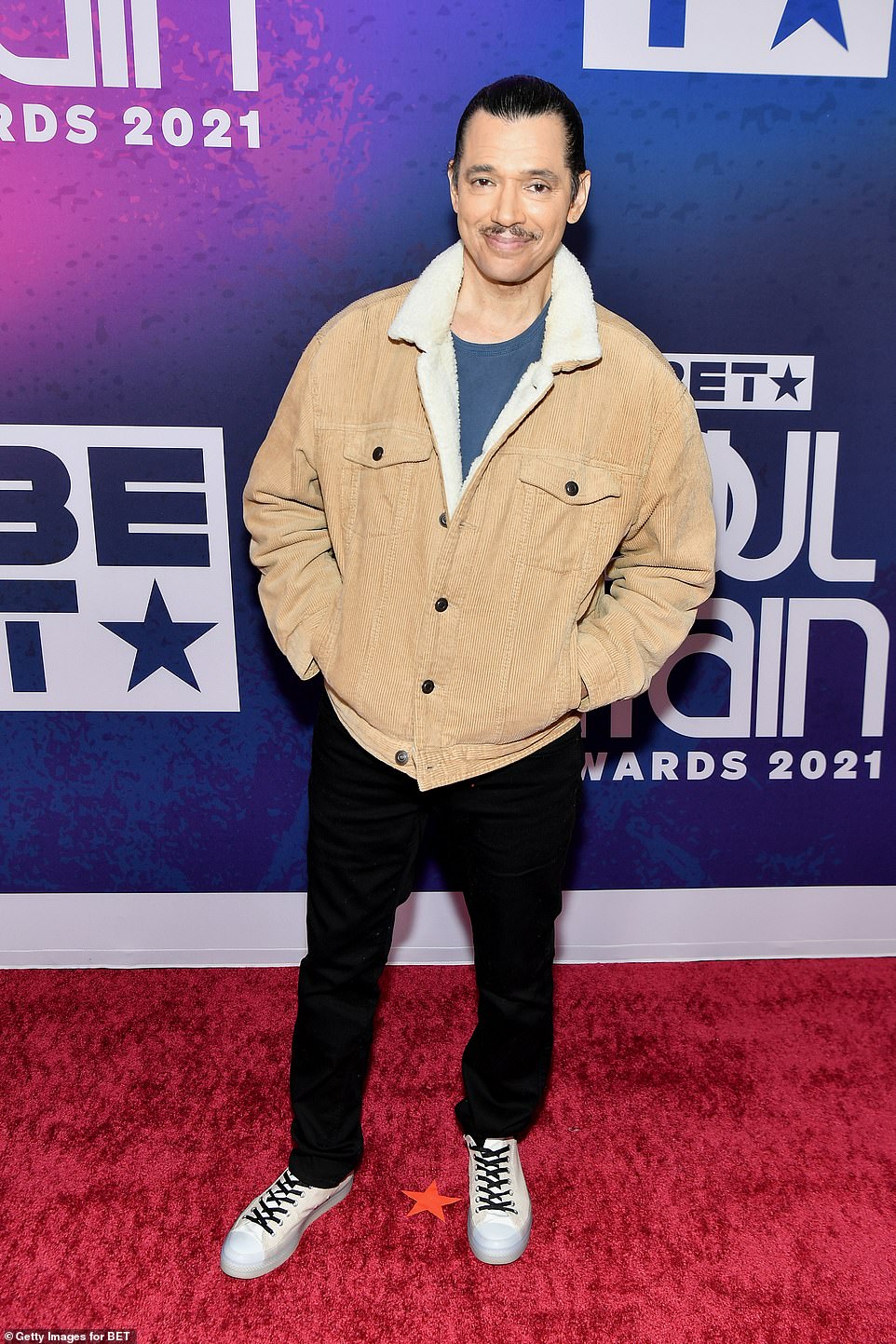 This year’s ceremony has a focus on benefiting the local Harlem community with the network granting 10 businesses and nonprofits a $10,000 micro-grant.

‘BET remains committed to the recovery of Black communities as we continue to navigate the effects of the COVID-19 global health crisis,’ BET Chief Communication and Social Impact Officer Jeanine Liburd said in a statement.

‘As we gather at the World Famous Apollo for the 2021 Soul Train Awards, BET is honored to take the next step in supporting Black businesses, innovators and leaders in memory of Don Cornelius and beyond.’ 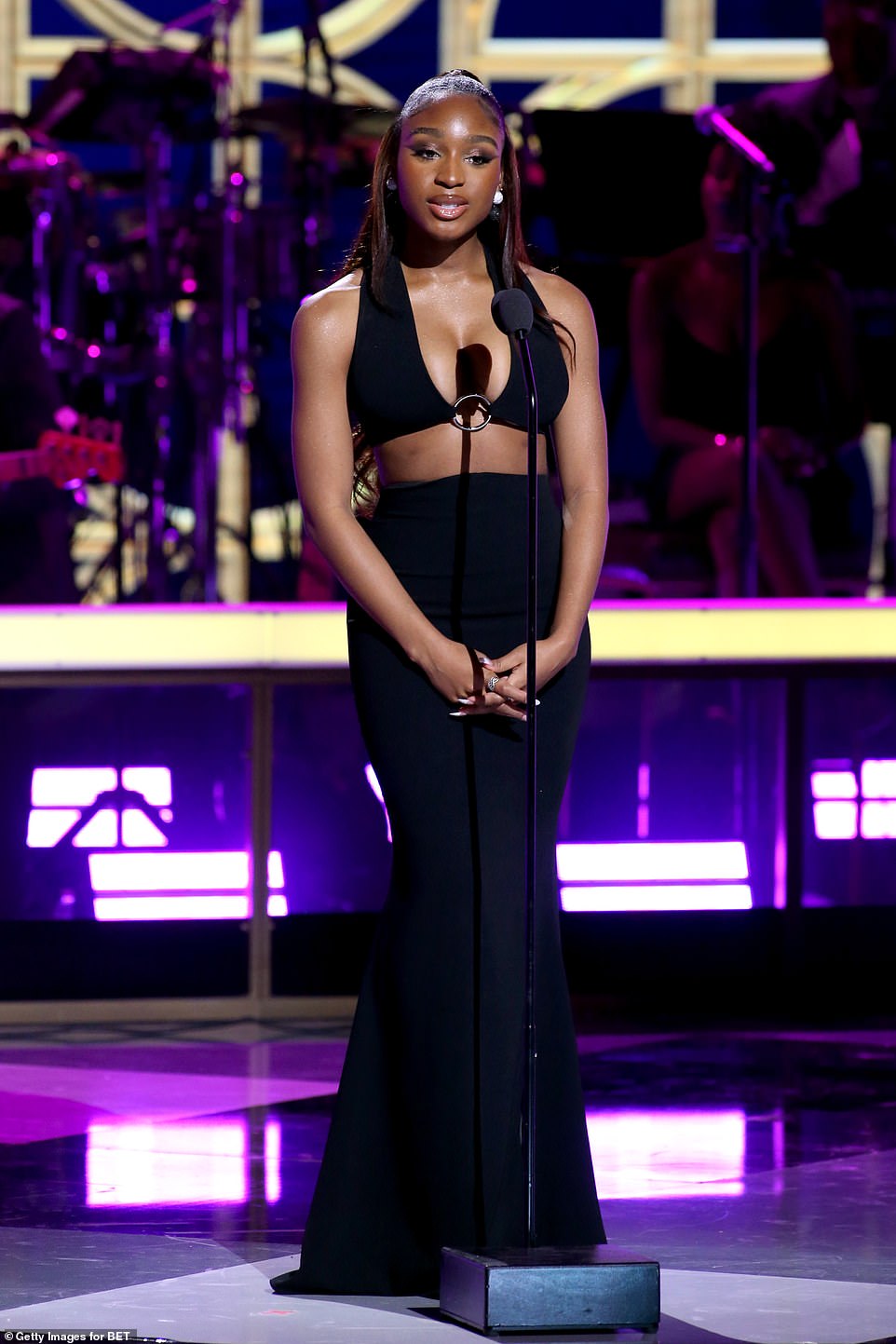 Presenting: Normani was seen speaking about Ashanti on stage at the event ahead of the Lady Of Soul award 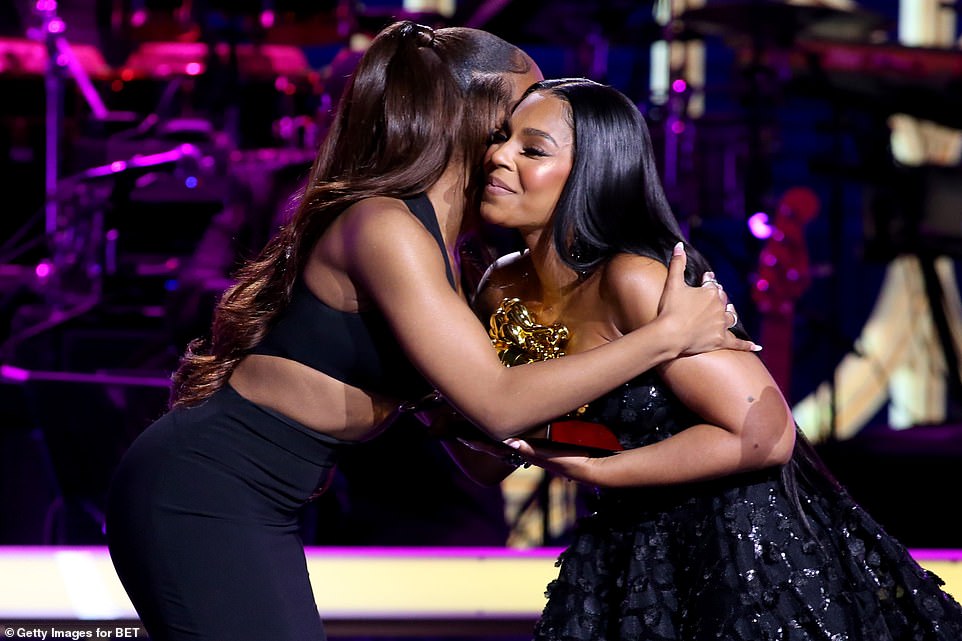 Warm embrace: Ashanti was pictured receiving her Lady Of Soul award and sharing a hug with Normani 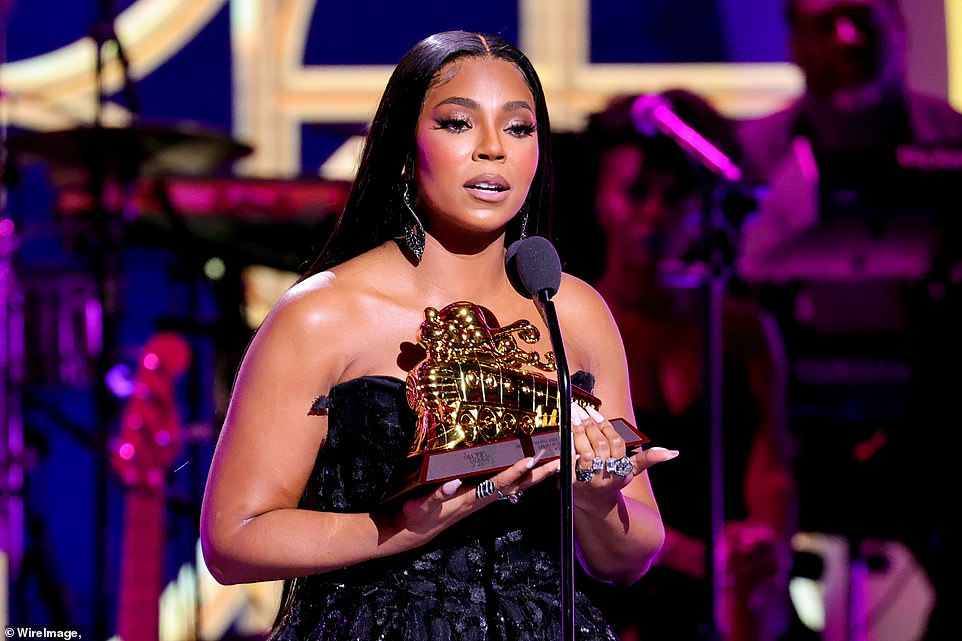 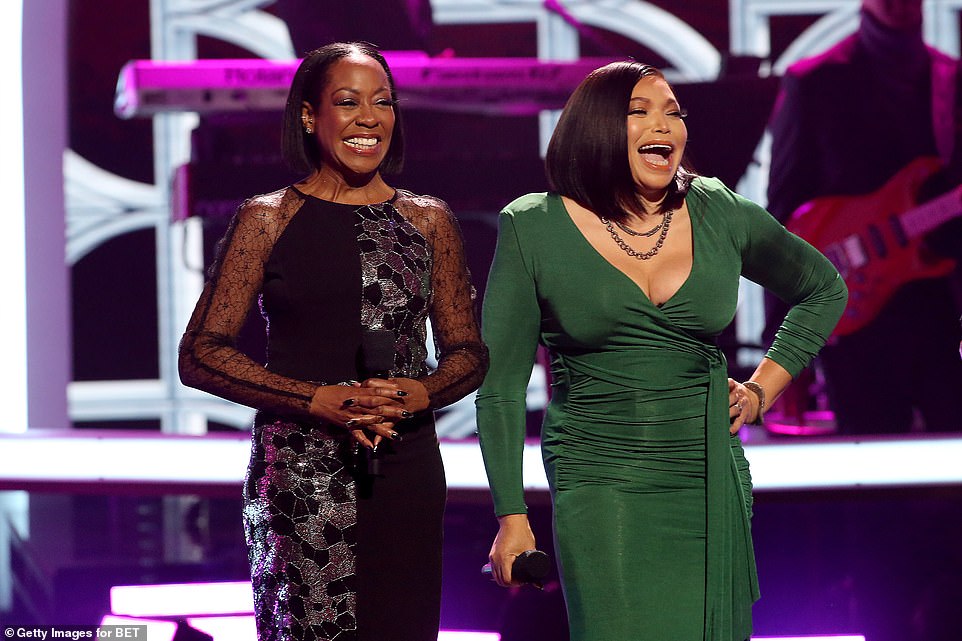 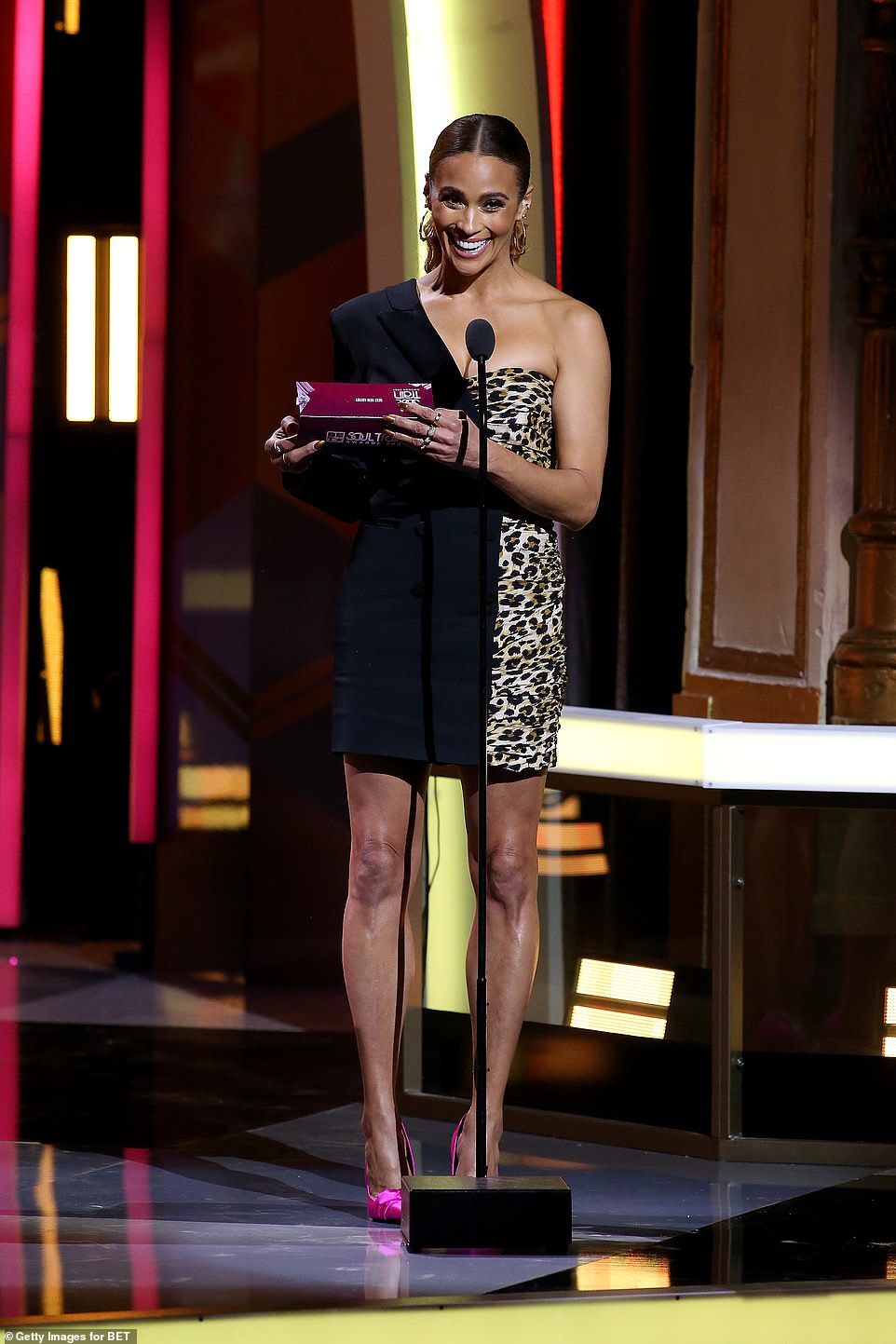 One of many: Patton was seen opening an envelope at the award ceremony to announce a winner 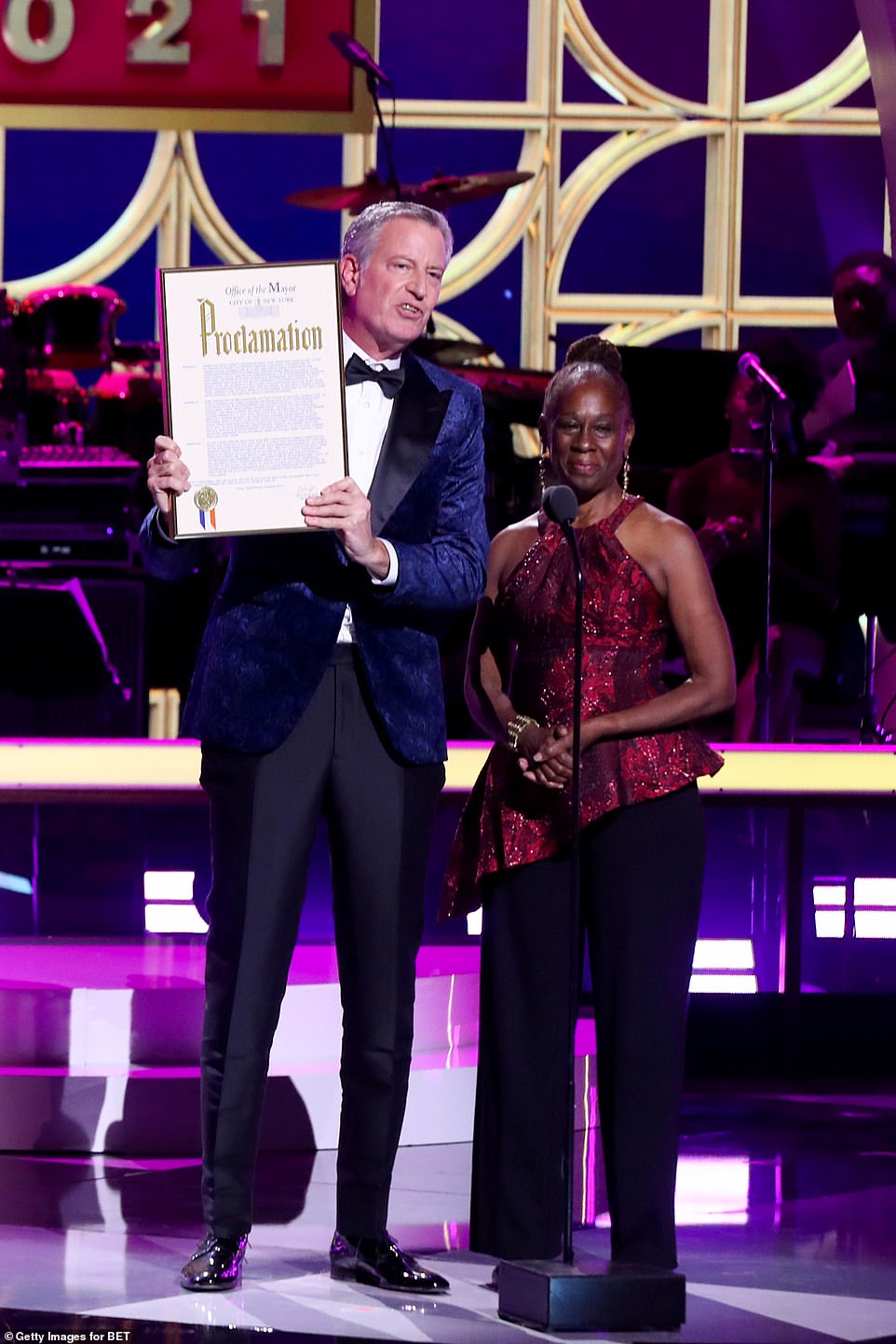 At this year’s event Ashanti snagged a big honor as she was given the Lady Of Soul award which was presented to her by Normani.

Other special awards included the Soul of Justice award which was an honor given to Ciara, Russell Wilson and 16-year-old activist Marley Dias. 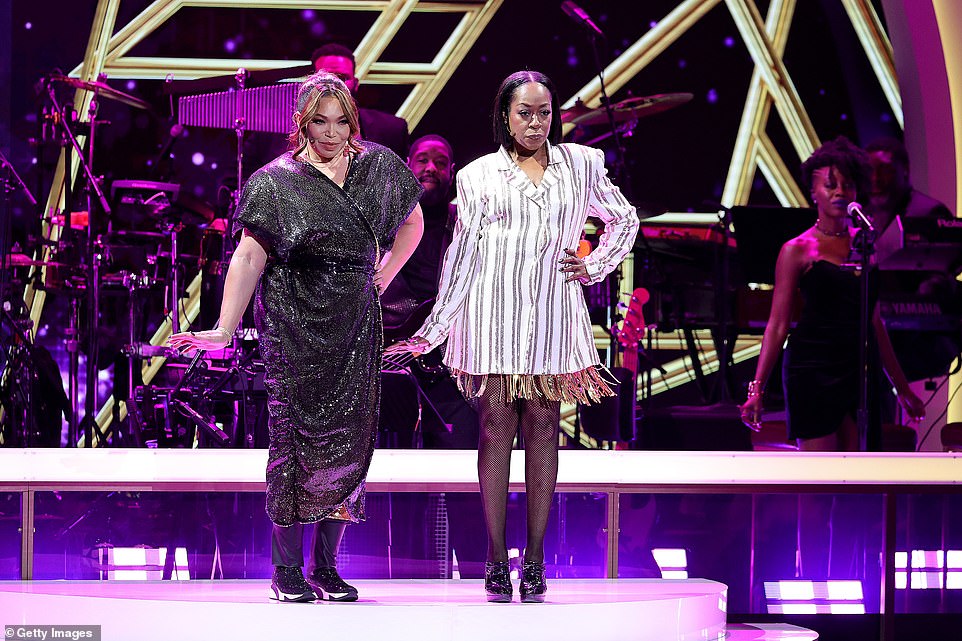 Entertainment: Taking their hosting duties seriously they entertained the crowd with a few musical bits 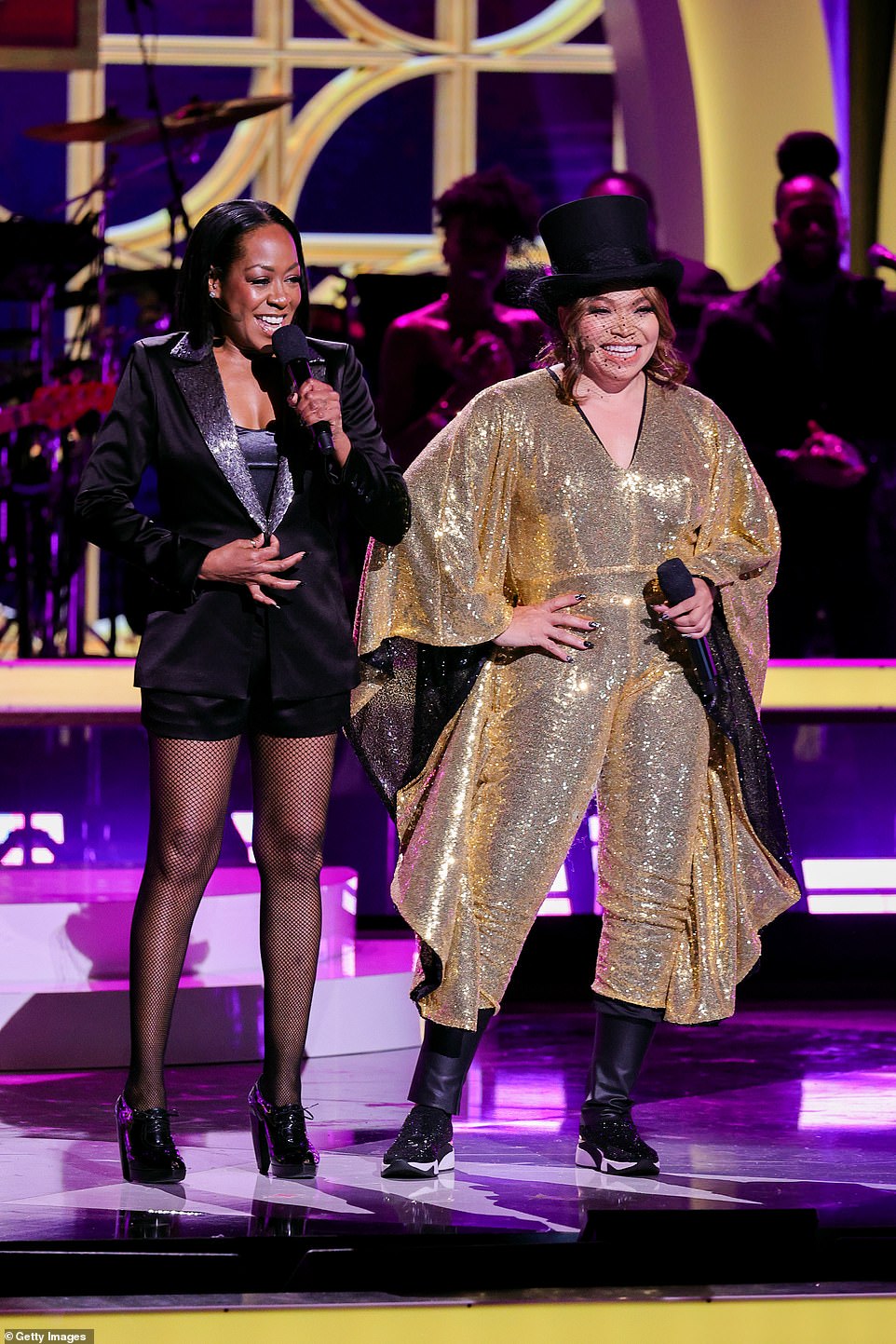 Comedic duo: The comedic actresses and real life best friends were seen hamming it up in a number of costumes 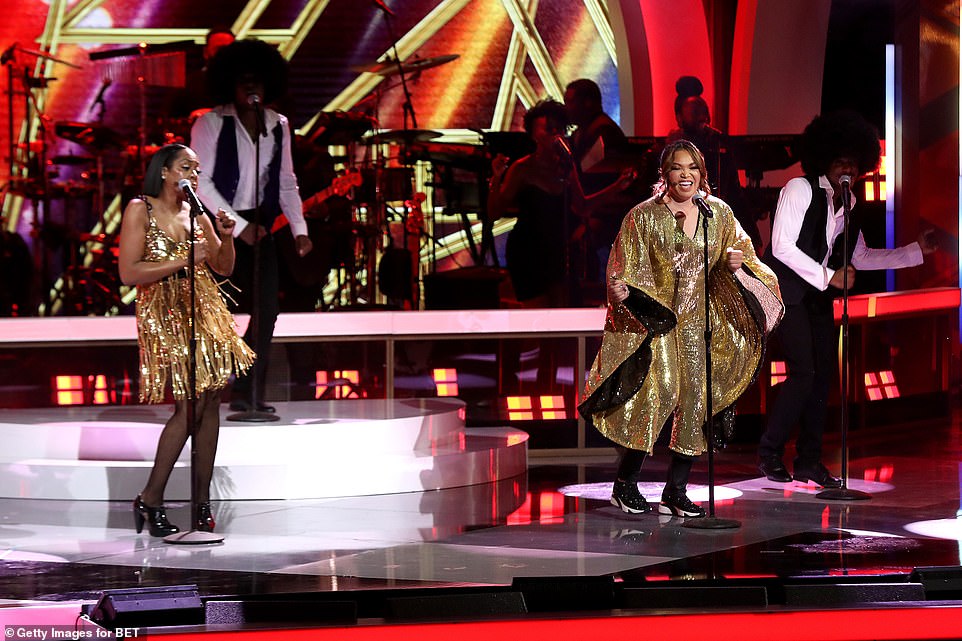 Back in action: The ladies have hosted the award ceremony for the past three years with 2021 marking their fourth 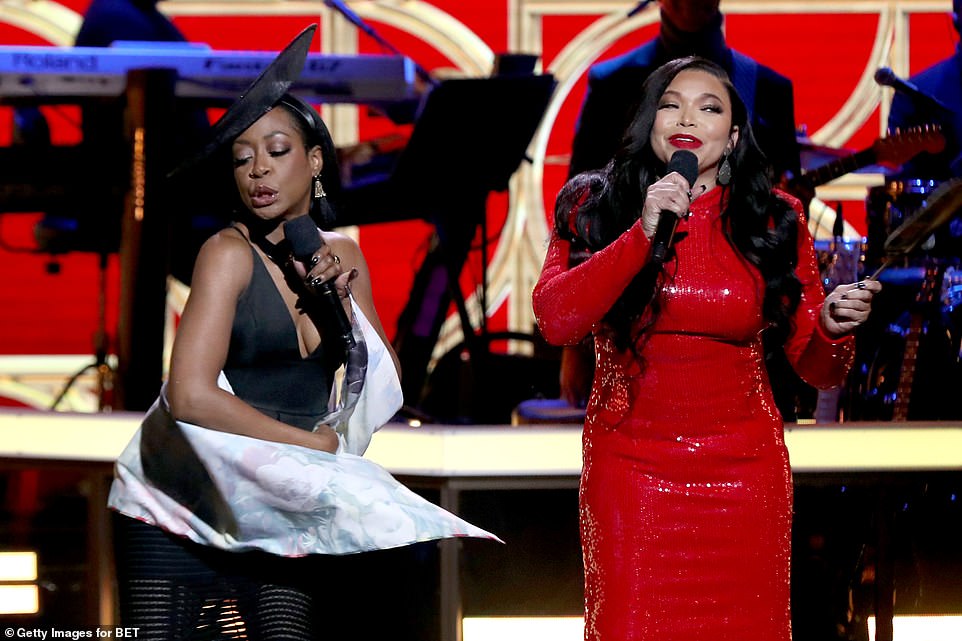 Stage presence: The four-time hosts were seen during another moment