North America gets 1,500 cubic miles of snow accumulation a year

More snow is covering North America than scientists previously realized, according to a new study.

Researchers from Ohio State University discovered that the amount of snow covering the continent is a whopping 50 percent above the amount scientists previously believed to be blanketing North America.

The researchers discovered that about 1,200 cubic miles of snow accumulate each year.

The analysis, published in Geophysical Research Letters, said that if the snow were to be distributed evenly across North America it would be slightly over seven-and-a-half inches deep.

If the snow were to fall in Ohio only it would be 150 feet deep.

The majority of the snow accumulates on top of 11 mountain ranges, including the Canadian Rockies.

The study said: ‘While these mountains compose only a quarter of the continent’s land area, they hold 60 percent of the snow.

‘The [new] research represents an important step toward understanding the true extent of fresh water sources on the continent.’

Study author Melissa Wrzesien said: ‘Our big result was that there’s a lot more snow in the mountains than we previously thought.

‘That suggests that mountain snow plays a much larger role in the continental water budget than we knew.’

Ohio State Associate Professor Michael Durand said that there’s no way of knowing the amount of water on the planet.

This fact amplifies the importance of the research, he explained.

Professor Durand said: ‘It’s extremely important to know – not just so we can make estimates of available fresh water, but also because we don’t fully understand Earth’s water cycle.’

But we do understand the fundamentals, according to Professor Durand. The study summarized: ‘Water evaporates, condenses over mountains and falls to earth as rain or snow. 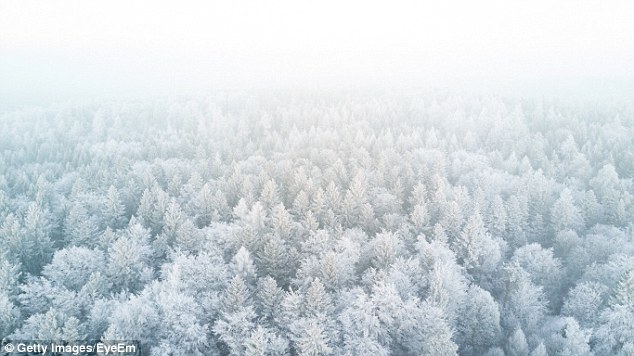 The researchers took snow water equivalent measurements for the study. These measurements allow scientists to know how much water would be left if all the snow in a certain area were to suddenly melt (file photo)

‘But exactly how much water there is – or what proportion of it falls as snow or rain – isn’t precisely known.

‘Satellites make reasonable measurements of snow on the plains where the ground is flat, though uncertainties persist even there. But mountain terrain is too unpredictable for current satellites.’

For this reason, researchers must create regional climate models on computers to get a sense of the amount of snow that accumulates across the continent.

This includes the Canadian Rockies, the Cascades, the Sierra Nevada and the Appalachian Mountains.

‘She stitches those results together with snow accumulation data from the plains,’ according to the release. ‘So far, the project has consumed 1.8 million core-hours on NASA’s Pleiades supercomputer and produced about 16 terabytes of data.’

The report said that the calculations would have taken 50 years to produce on a regular laptop.

WHAT IS SNOW WATER EQUIVALENT?

The snow water equivalent is a snowpack measurement commonly employed to determine the amount of water held within a portion of snow. 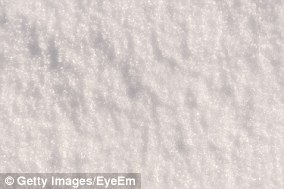 The USDA explains: ‘It can be thought of as the depth of water that would theoretically result if you melted the entire snowpack instantaneously.

‘For example, say there is a swimming pool that is filled with 36 inches of new powdery snow at 10 percent snow water density.

‘If you could turn all the snow into water magically, you would be left with a pool of water 3.6 inches deep.’

The snow water equivalent can be used to predict streamflow forecasting.

The research gave way to the realization that scientists had been underestimating the amount of snow on the ground.

The study said: ‘Whereas scientists previously thought the continent held a little more than 750 cubic miles of snow each year, the Ohio State researchers found the total to be closer to 1,200 cubic miles.

‘They actually measure snow water equivalent, the amount of water that would form if the snow melted – at about a three-to-one ratio.’

This equivalent for North America would be roughly 400 cubic miles of water.

This is enough to flood all of North America in two-and-a-half inches of water.

Researchers previously thought that about two-thirds of snow accumulation existed on the plains and one-third was found on mountains.

However, the Ohio State researchers found that the exact opposite is true.

‘Around 60 percent of North American snow accumulation happens in the mountains, with the Canadian Rockies holding as much snow as the other 10 mountain ranges in the study combined,’ the report said.

Professor Durand explained why the report is influential, saying: ‘Each of these ranges is a huge part of the climate system, but I don’t think we realized how important the Canadian Rockies really are.

‘We hope that by drawing attention to the importance of the mountains, this work will help spur development in understanding how mountains fit into the large-scale picture.’

Professor Durand said scientists will require a dedicated satellite that is capable of assessing snow depth in plains as well as complex terrain to better understand the topic.