The North and South Korean militaries withdrew troops and firearms from 22 front-line guard posts on Saturday as part of September’s agreement to reduce tensions across the world’s most fortified border.

South Korea says the military agreement is an important trust-building step that would help stabilize peace and advance reconciliation between the rivals.

But critics say the South risks forfeiting some of its conventional military strength before North Korea has taken any meaningful steps towards denuclearization – an anxiety that is growing as larger nuclear negotiations between Washington and Pyongyang seemingly drift into a stalemate.

South Korean soldiers leave a border guard post at an undisclosed area in the Demilitarized Zone (DMZ). Both North and South Korean militaries withdrew troops and firearms from 22 front-line guard posts on Saturday 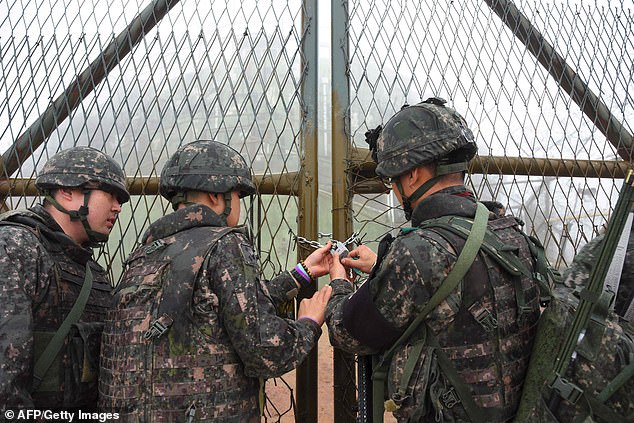 The 155-mile border buffer is peppered with millions of land mines and has been the site of occasional skirmishes between the two forces since the 1950-53 Korean War. The North is believed to have about 160 guard posts within the DMZ.

In the September military agreement, reached on the sidelines of a summit in Pyongyang between North Korean leader Kim Jong Un and South Korean President Moon Jae-in, the Koreas pledged to eventually withdraw all guard posts within the DMZ, but to start by removing 11 from each side as a ‘preliminary’ measure. 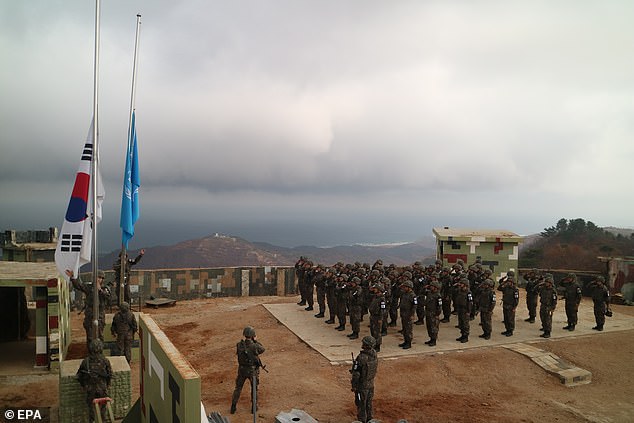 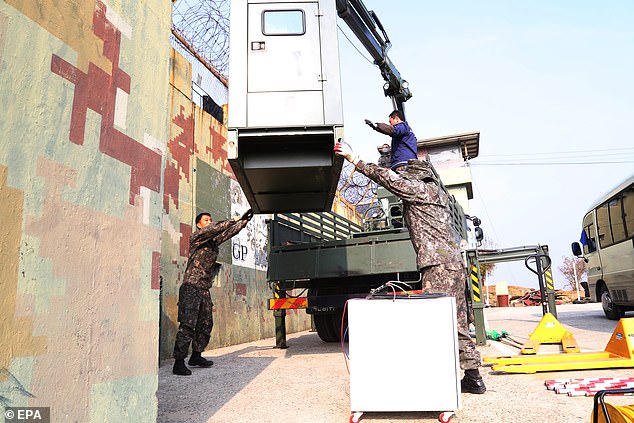 The South Korean Defense Ministry official said soldiers on Saturday completed the disarming of 11 guard posts on the southern side of the DMZ.

The official, who did not wanted to be named, said the ministry believes the North has also finished withdrawing personnel and weapons from 11 guard posts on the northern side.

The Korea’s exchange gifts across the border

South Korea airlifted 200 tons of tangerines to North Korea on Monday in return for shipments of pine mushrooms by the North in September.

It was a sign that liberal South Korean President Moon Jae-in is pressing on with efforts to improve ties with the North despite stalemated global diplomacy on its nuclear program. 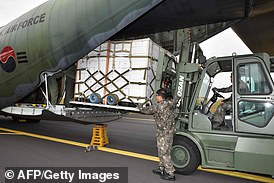 After a summit meeting between the Koreas in Pyongyang in September, North Korea gave South Korea 2 tons of pine mushrooms – white and brown fungi considered a healthy delicacy in both Koreas and one of the North’s most prized regional products.

‘Six dogs were added to a gift of two dogs. I cannot help saying it’s a big fortune and I hope that South-North ties will be like this,’ Moon said.

Pungsan is a dog breed native to North Korea and is best known for its loyalty and bravery during hunting. 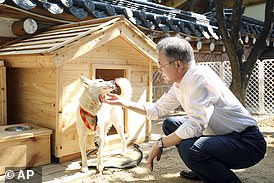 The Koreas plan to destroy 20 of the structures by the end of November, while symbolically leaving one demilitarized guard post on each side. They plan to jointly verify the results in December.

The September deal also contained an agreement to create buffer zones along their land and sea boundaries and a no-fly zone above the border, which took effect on November 1.

The Koreas and the U.S.-led U.N. Command recently finished removing firearms and troops from a jointly controlled area at the border village of Panmunjom and eventually plan to allow tourists to freely move around there.

The two countries have also been clearing mines from front-line areas and plan to start in April their first-ever joint search for remains of soldiers killed during the Korean War.

While their militaries move ahead with tension-reducing steps, President Moon is otherwise running out of goodwill gestures toward North Korea, which is under heavy U.S.-led sanctions over its nuclear weapons program.

Unless the sanctions are lifted, it would be impossible for Moon to push ahead with his more ambitious plans for engagement, such as reconnecting railways and roads across the border and normalizing operations at a jointly-run factory park.

After a provocative series of nuclear and missile tests North Korea entered talks with the United States and South Korea this year.

The north has since taken measures such as dismantling its nuclear test site and parts of its rocket-engine testing facility.

Now, Pyongyang insists that sanctions should be removed before there is any further progress in negotiations.

Washington, however, says they will remain until the North takes more concrete steps toward the irreversible and verifiable removal of its nuclear weapons.

Analysts say the discord may have caused the last-minute cancellation of a meeting between U.S. Secretary of State Mike Pompeo and his North Korean counterpart, Kim Yong Chol, that had been scheduled for this past Thursday.

The two were due to discuss denuclearization issues and had planned to set up a second summit between Kim Jong Un and President Donald Trump. 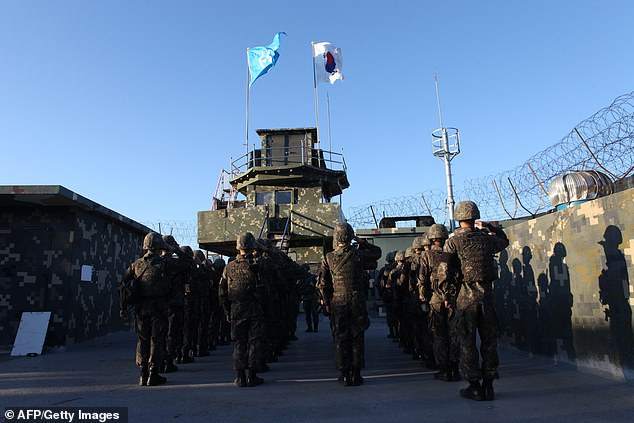 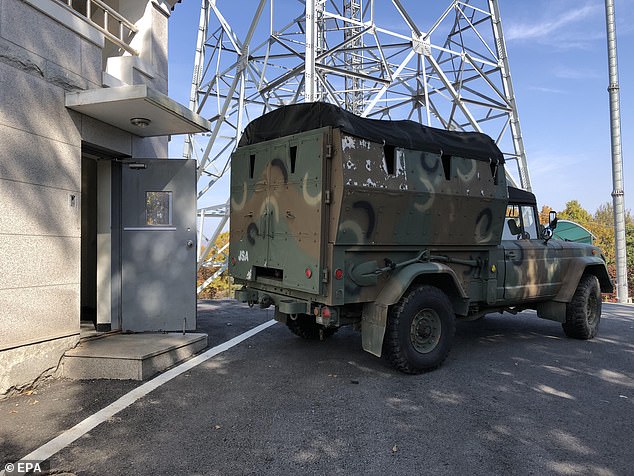 A military vehicle waits to carry equipment before leaving from the Joint Security Area (JSA) on the Demilitarized Zone (DMZ) in the border village of Panmunjom in Paju, South Korea. The two Koreas agreed to turn the JSA into a weapon-free zone under the agreement signed by their defense chiefs during the Pyongyang summit in September

President Moon, who has met Kim three times this year, believes that better ties between the Koreas will help resolve the nuclear issue.

South Korea’s Unification Ministry said Monday it has approved a visit by seven North Koreans to attend an academic forum in the South later this week.

The forum is on regional issues, including Japan’s wartime mobilization of laborers in the Asia-Pacific region.

North Korea says the South’s military drills with the U.S violate their agreement

About 500 U.S and South Korean marines resumed military drills last week, having indefinitely suspended them June as they focused on engaging with North Korea. 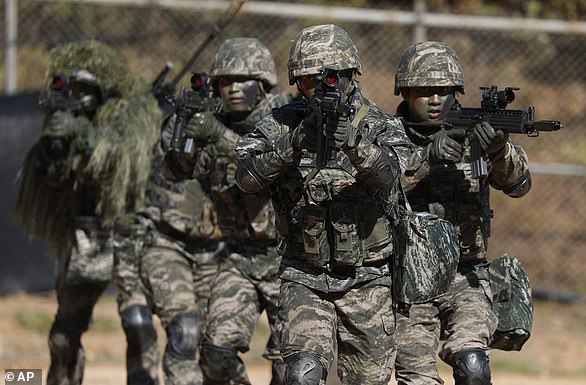 South Korean marines secure an area during their regular drill on Yeonpyeong Island, South Korea Thursday, November 1, 2018. The U.S. and South Korea are reviewing whether they will conduct large-scale military exercises next year and will decide before December

The joint two-week drills are ‘directly against the inter-Korean military agreement that promised to eliminate practical threats of war and fundamental hostile relations from the Korean peninsula,’ the newspaper said.

A spokesman for South Korea’s defense ministry on Monday rejected the North’s criticism, saying they are defensive exercises involving small units under the size of a battalion.

But the agreement was short on specifics and negotiations have made little headway. 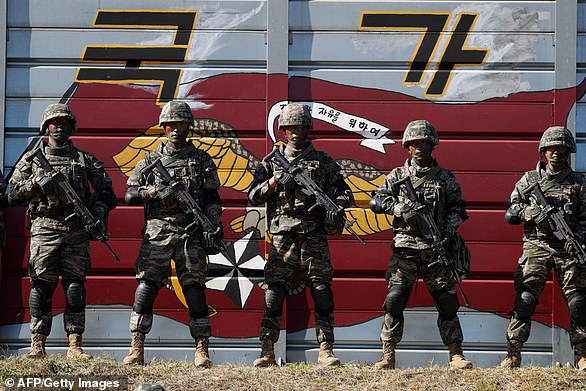 North Korean media mentioned the cancelled meeting for the first time on Saturday, when the Chosun Sinbo website reported that the talks could still be productive.

But it repeated North Korean warnings that the country could restart its nuclear weapons development if the U.S. does not make more concessions.

The biggest combat-readiness war game ever staged in and around Japan also went ahead last week, with the nuclear-powered aircraft carrier USS Ronald Reagan joining Japanese destroyers and a Canadian warship in the ocean off Japan – another key player in the effort to pressure North Korea.