A detective in North Carolina has been fired after it emerged he sent inappropriate messages to women whose rape cases he had worked, including asking a victim to dress as a nurse for him.

Paul G. Matrafailo III, 33, of the Fayetteville Police Department was removed from his role in May after almost 10 years working the job, following claims from three women about messages ‘perceived as inappropriate’.

According to WRAL.com, one of the victims even received offensive messages after the cop was dismissed.

Victim Erin Scanlon told The Fayetteville Observer: ‘He didn’t contact me on Instagram until nine months after (the) case was over. Obviously he was still following me on social media. I have no idea how he found me on social media.’

Paul G. Matrafailo III (pictured in 2017), 33, of the Fayetteville Police Department was removed from his role in May 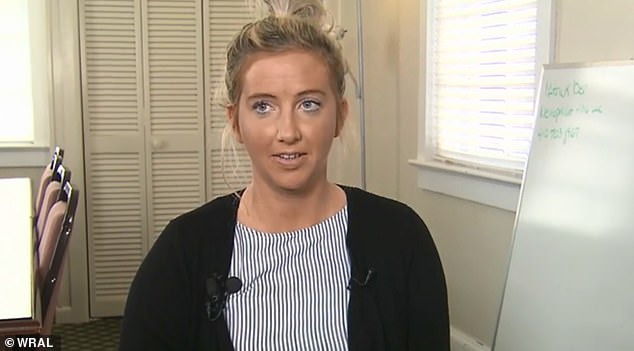 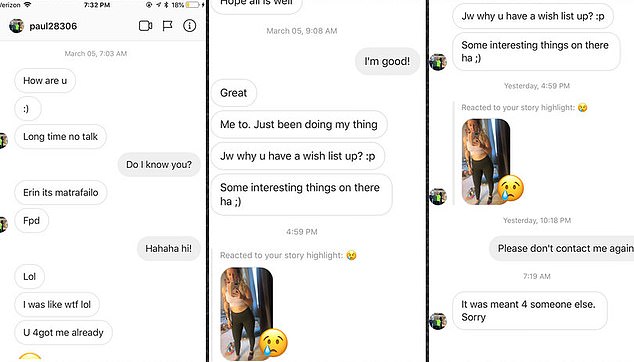 Messages published by TooFab show he sent tongue and wink emojis alongside messages asking her about an Amazon wish list linked to her account that contained lingerie.

‘Jw (just wondering) why you have a wish list up :p,’ the March 5 messages read. ‘Some interesting things on there ha ;).’

‘It was shocking and inappropriate,’ Scanlon continued to the Observer. ‘It was honestly a little bit unbelievable that he would think of me that way or think it’s OK to talk to me like that.

‘It’s like, really? Another guy that is trying to hit on me when he is supposed to be a police officer.’

The screen shots show the paul28306 account user then reacted with a sad face crying emoji to a selfie posted on Scanlon’s Instagram Stories after she hadn’t responded after some hours.

Scanlon – whose name is not on her account – eventually replied ‘please don’t contact me again’, prompting the paul28306 account to reply: ‘It was meant 4 someone else. Sorry.’

The screen shots show that Scanlon initially had no idea who had contacted her that morning, saying ‘How are u J long time no talk.’

She asked ‘do I know you?’ and the social media user identified himself, writing: ‘Erin its matrafailo Fpd.’

Scanlon wrote back ‘hahaha hi!’ and the paul28306 account responded ‘lol I was like wtf you 4got me already’.

Matrafailo was the SVU detective on the case regarding her 2016 rape.

‘He saw the scene (and) the safe exam (and) the rape kit which has pictures of my entire body,’ Scanlon told WRAL.com about how she felt she had been victimized a second time.

Another victim, Erin Myers said the cop would randomly text her but things got ‘weird’ when he learned she had graduated after studying nursing.

She said she didn’t respond but at one point thought he might be testing her in regards to the case and wanted to see if she’d flirt back. 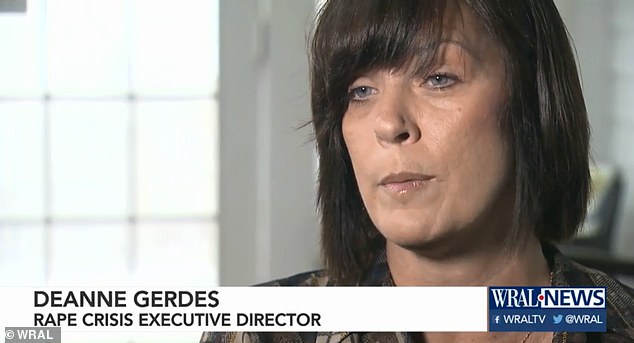 Myers didn’t hear from him for a while but the inappropriate contact took off again some time later and led to him proposing to take her out.

‘He said, “Hey, how are you doing? Are you still mad at me?” I didn’t recognize the number,’ Myers said. ‘I said, “I’m sorry, you have the wrong number.” He goes, “Don’t play me. You know who this is.” It took me a second to realize who it was.

‘I said to my husband, oh my God, this is Matrafailo. I told him I could not talk right now. My family is here for my graduation. And he’s like, “Oh you graduated. Let me take you out. I care for you”.’

Gerdes said: ‘Imagine being raped and then having your rape detective hitting on you. It’s disgusting

Matrafailo had also been written up on May 31, 2018 in regards to ‘unbecoming conduct for sending inappropriate and offensive comments and sharing video of a case to someone not working on the case.’

An investigation into communication on April 24, 2018 between colleagues ‘concluded the comments sent to the Forensic Technicians were perceived as inappropriate and offended them’.

On April 1, 2019 he was sent a letter of Consideration of Dismissal ‘based on your actions outside of duty hours which diminished your ability to fulfill your responsibilities as a police officer and which could bring discredit upon the city and the Fayetteville Police Department’.