A North Carolina man learned the runny nose he’d been suffering from for the last five years was actually leaking brain fluid.

Greg Phillpotts, from Johnston County, was battling what he believed to be allergies. Some doctors had even diagnosed him with chronic bronchitis and pneumonia.

‘You could be anywhere. You could be on the airplane, you could be talking to anybody and this thing just drains out of your face,’ he told WTVD.

Doctors later told Phillpotts he had a hole in the membrane surrounding his brain and, if he waited any longer to get it fixed, it could have resulted in a brain infection that could have killed him. 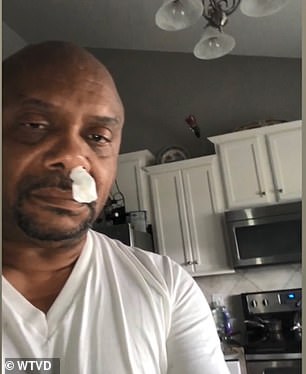 Greg Phillpotts (left and right), from Johnston County, North Carolina, was suffering from a runny nose for five years. He believed it to be allergies but some doctors had even diagnosed him with chronic bronchitis and pneumonia 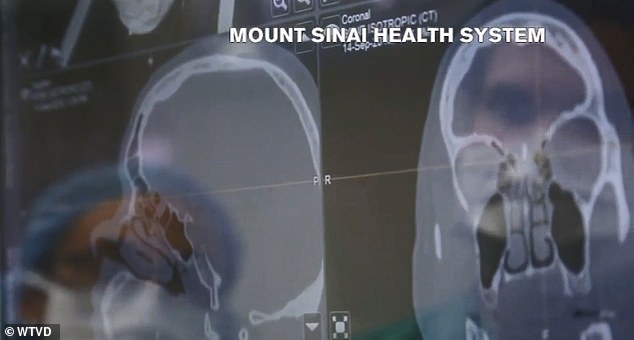 After years of stuffing tissues up his nose and not being able to breathe, Phillpotts went to see a specialist. Pictured: An X-ray showing Phillpotts’s condition

There were many situations in which Phillpotts’s runny nose would interfere at family functions.

Last Thanksgiving, he was preparing dinner for his family when nasal fluid ran into the food.

‘I was preparing a meal and standing in the kitchen and it just added itself to the ingredients – it screwed up the whole dinner,’ Phillpotts told WTVD.

‘I was stuffing tissues up my nose. It became normal up until February because I was up all night coughing.

In February, he made an appointment with Dr Alfred Iloreta, an otolaryngologist at Mount Sinai Hospital in New York City.

Dr Iloreta told Phillpotts he didn’t have allergies, but rather a cerebral spinal fluid leak.

‘It’s the leakage of fluid that surrounds the brain to cushion it primarily to protect it from shock or trauma or anything like that,’ Dr Iloreta told WTVD.

The leak occurs either from a hole in the skull bone or a tear in membranes surrounding the brain, resulting in fluid draining from the ear or the nose. 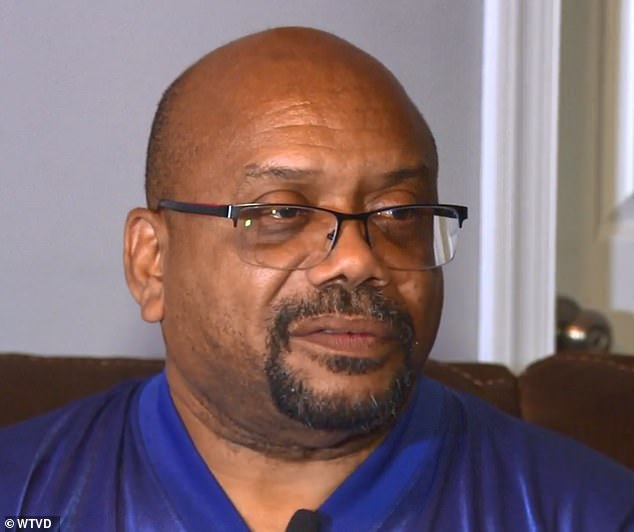 Doctors told Phillpotts (pictured) he had a hole in the membrane surrounding his brain, which was resulting in a cerebral spinal fluid leak While many leaks can heal on their own, the hole can lead to bacteria traveling from the nose to the brain resulting in meningitis. Pictured: An X-ray showing the hole in Phillpotts’s membrane 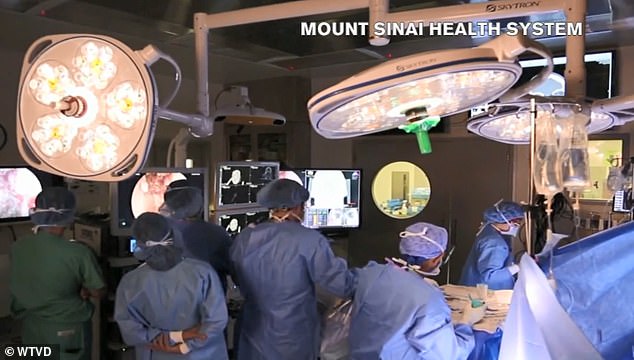 Patients with cerebral spinal fluid leak typically have clear, watery drainage from either one ear or nostril.

Symptoms that often accompany the leak include headache, vision changes and loss of hearing.

‘Sometimes when you have this leakage of the fluid from the brain, it can evolve into what we call an ascending infection. So bacteria can travel from the nose to the brain resulting in meningitis,’ said Dr Iloreta.

According to Health, these leaks affect five in every 100,000 patients, not counting leaks induced by trauma.

While many leaks can heal on their own and only require the patient being on bed rest, others require less conservative treatments.

Doctors may use a nasal endoscopy to perform minimally invasive surgery or an epidural blood patch.

The patch involves the patient’s own blood being injected into the spinal cord. The blood forms a clot which ‘closes’ the hole where fluid is leaking from.

Dr Iloreta decided to perform a minimally invasive surgery in which a flap of tissue from Phillpotts’s body was used to patch the hole.

‘Have you ever been so congested that you can’t breathe?’ Phillpotts told WTVD. ‘All of sudden you can breathe again and what a relief that was!’