Boys will be boys! Mom films her disabled four-year-old son beaming with joy as he bounces on a trampoline in his wheelchair

An adorable four-year-old boy beams with joy as he  bounces on a trampoline while still in his wheelchair.

Wyatt Burggraff, who has spina bifida, is in his wheelchair on a trampoline as Nate, an employee of TNT Kids Fitness in Fargo, North Dakota, jumps.

But as the video starts Wyatt’s glasses almost fall from his face and the boy has to struggle to keep them on.

Quick-thinking Nate takes the glasses from Wyatt’s face and puts them on himself, making the young boy giggle.

Wyatt’s laugh is addictive as he is bounced up to five feet into the air.

The four-year-old asks to go higher and beams with joy as he is bounced on the trampoline.

The viral video has had almost six million views and 92,000 shares since it was posted on social media by the fitness center.

TNT Kids Fitness works with children who have special needs and Wyatt has been going with his family once a week for the last two years.

The company’s website claims to ‘unlock potential’ and Wyatt’s mom Allison said she could not believe how much Wyatt loved the trampoline. 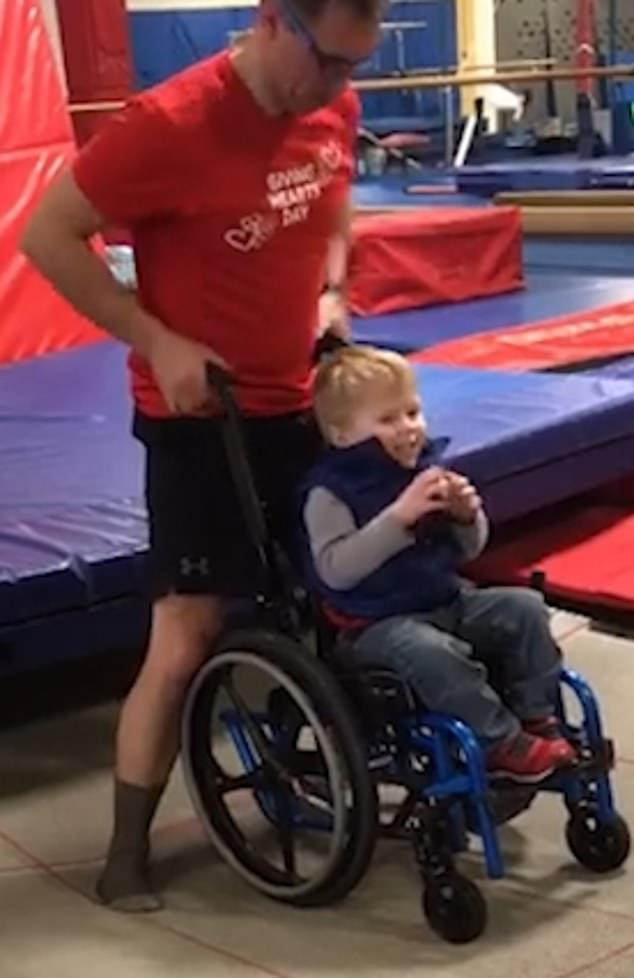 She told KVRR local news: ‘I didn’t even think it was possible that a wheelchair could jump on a trampoline.’

Wyatt has spina bifida, a defect of the spine in which part of the spinal cord is exposed through a gap in the backbone.

But at TNT kids fitness that does not mean he cannot join in with the other kids.

‘Every day we get to see these amazing men and women work with kids with special needs and really their able to tap into potential that parents didn’t even know they had,’ his mother added.

The adorable video was filmed at the fitness center’s Giving Hearts Day, a 24-hour charity event in Minnesota and North Dakota for local charities.

And the gym, which opened in 2009, now sees more than 2,000 children through its doors each week.