North Korea has fired two new short-range ballistic missiles, almost exactly a week after it tested two other missiles in an attempt to put pressure on the US to halt upcoming military drills with South Korea and restart nuclear disarmament talks.

The two missiles fired Wednesday were launched at 5.06am and 5.27am local time from near the city of Wonsan on North Korea’s east coast – the same area where last week’s tests were conducted.

South Korea said the missiles flew 155 miles out to sea at a maximum altitude of about 19 miles and appeared to be a different type from previous launches. 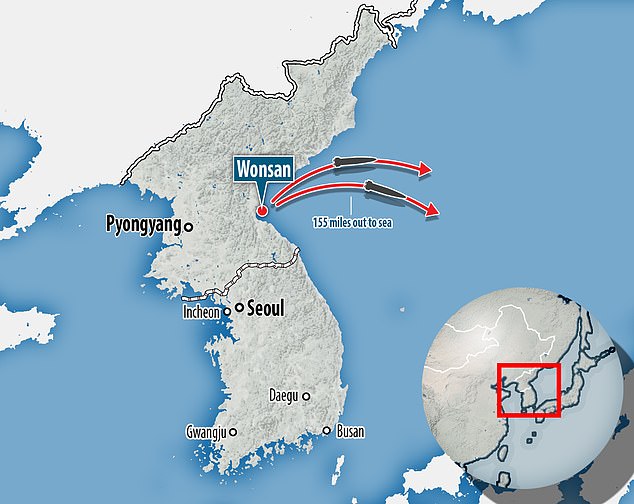 South Korea said the missiles appeared different to previous launches, and the fact that they flew only 19 miles above the surface suggests the North was testing their evasive capabilities

Colonel Lee Peters, a spokesman for U.S. military forces in South Korea, said: ‘We are aware of reports of a missile launch from North Korea and we will continue to monitor the situation.’

He did not comment when asked whether the joint South Korea-U.S. drills, scheduled to begin next month, would continue.

Japan’s defence ministry said no missiles had reached Japanese territory or its exclusive economic zone, and the launches did not threaten Japan’s immediate security.

The South Korean and U.S. militaries were trying to gather more details.

The test would be yet another North Korean violation of U.N. Security Council resolutions, which has seen the country hit with crippling sanctions.

It comes as the country’s negotiations with the U.S. over its nuclear weapons program are at a stalemate and as Pyongyang has expressed anger over planned U.S.-South Korean military drills.

‘The North’s repeated missile launches are not helpful to efforts to ease tensions on the Korean Peninsula, and we urge (North Korea) to stop this kind of behavior,’ the South Korean statement said.

North Korea’s state media said those tests were supervised by leader Kim Jong-un and were designed to deliver a ‘solemn warning’ to South Korea over its purchase of high-tech U.S.-made fighter jets and the planned military drills.

Since Trump and Kim’s June 30 meeting in the Demilitarized Zone (DMZ) between the two Koreas, Pyongyang has accused Washington of breaking a promise by planning to hold joint military exercises with South Korea next month and warned that these could derail any talks.

North Korea has also warned of a possible end to its freeze on nuclear and long-range missile tests that has been in place since 2017, which Trump has repeatedly upheld as evidence of the success of his engagement with Kim.

A top South Korean official said last month the drills would go ahead as planned but would mainly involve computer simulations and not troops in the field. 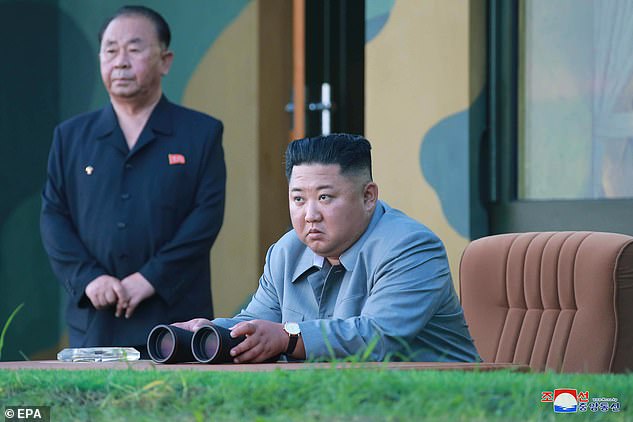 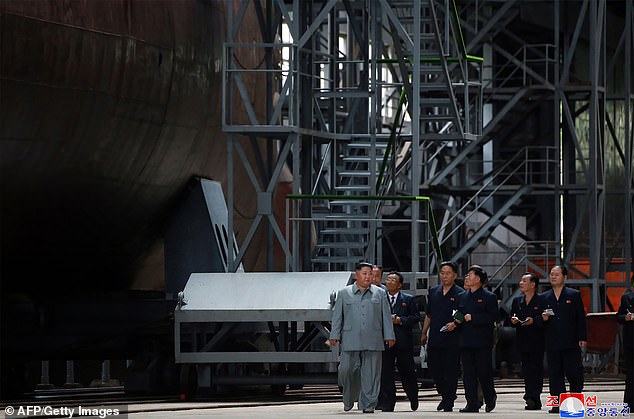 The North has been ramping up pressure on the US to abandon the military drills and restart talks over sanctions relief in return for dismantling its nuclear programme. Pictured, Kim inspects a new type of submarine that the Hermit Kingdom showed off in recent weeks

Even though North Korea is banned by the U.N. from using ballistic technology in any weapons launches, it’s unlikely that the nation, already under 11 rounds of U.N. sanctions, will be hit with fresh punitive measures.

Past sanctions were imposed only when it conducted long-range ballistic launches.

Observers say a low altitude flight by the missiles indicate North Korea may have been testing their ability to avoid being intercepted.

Earlier last week, Kim also visited a newly built submarine and expressed his satisfaction with its weapons system. North Korea said its deployment was ‘near at hand.’

If confirmed, it would be North Korea’s first operational submarine with missile launch tubes, some experts said.

North Korea acquiring the ability to launch missiles from submarines would be an alarming development because such missiles are harder to detect in advance.

Experts say the submarine North Korea used to test-fire missiles in recent years should be regarded as a test platform with a single launch tube.

They say other North Korean submarines only have torpedo launch tubes.

The official said a top staffer from the National Security Council hand-delivered photographs from the leaders’ June meeting at the Korean Demilitarized Zone to a North Korean official last week.

The Trump administration official spoke on the condition of anonymity because the official wasn’t authorized to speak publicly.

The DMZ meeting was the third summit between Trump and Kim.

During the DMZ meeting, Trump and Kim agreed to resume nuclear diplomacy in coming weeks, but there hasn’t been any known meeting between the countries. 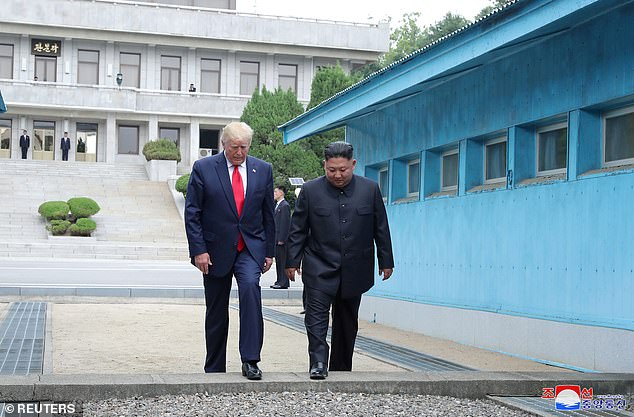 It comes after an impromptu meeting between Trump and Kim which saw Trump become the first US President to set foot in North Korea, but failed to produce any diplomatic progress

Some experts say North Korea wants a U.S. promise to ease sanctions, accept a slow, step-by-step disarmament process by the North or for the U.S. to make other concessions once the diplomacy restarts.

Speaking to reporters accompanying him to an Asian security forum in Thailand, U.S. Secretary of State Mike Pompeo said he’s very hopeful for a quick resumption in the nuclear talks.

He said he’s waiting to see if North Korea’s foreign minister comes to the meeting in Bangkok and is confident the two will see each other if he does.

Despite a recent lack of progress in nuclear diplomacy, both Trump and Kim have said they have maintained good relations with each other.

After last Thursday’s missile launches, Trump tried to downplay the significance of the tests, saying that ‘short-range’ was the most important detail.

A North Korean version could likely reach all of South Korea – and the 28,500 U.S. forces stationed there – and would be extremely hard to intercept.

Before last week’s launches, North Korea last fired missiles into the sea in early May, and experts said those were also Iskander-like missiles.

During Wednesday’s briefing, the South Korean military intelligence officers said that an analysis of North Korea-dispatched photos showed that the North fired four missiles on two days, according to Lee, the lawmaker.

South Korea earlier said the North fired a total of three missiles at the time.

After entering talks with Washington, North Korea has suspended nuclear and long-range missile tests, and Trump has said that is proof that his North Korea policy is working well and has eased the danger of a war with the North.

In 2017, Trump and Kim exchanged crude insults and threats of destruction as Kim oversaw a series of high-profile nuclear and missile tests meant to build nuclear missiles capable of reaching the continental United States.