South Korea’s Joint Chiefs of Staff said the launches were done Wednesday from the Hodo peninsula. There was no confirmation from Pyongyang of the launch.

The dictator said they were a ‘solemn warning’ over the military drills planned in South Korea with the U.S., and that the missiles were newly designed tactical weapons.

Thursday’s launch was the first since Kim and U.S. President Donald Trump agreed to resume nuclear talks during an impromptu June meeting in the demilitarised zone between North and South Korea. 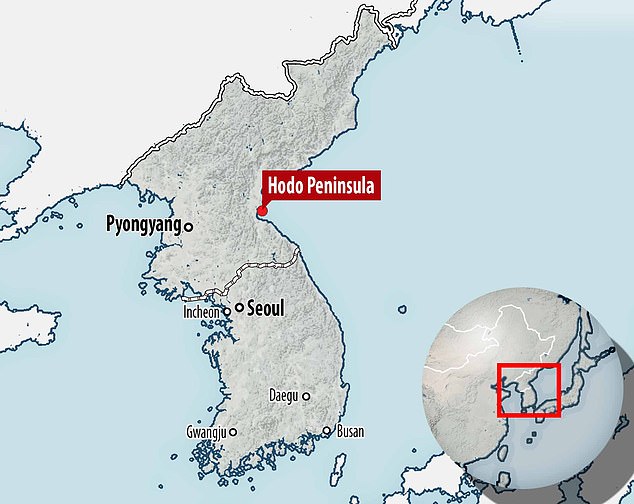 Pictured: where the missiles were launched from in North Korea

That working-level dialogue has yet to begin and even before the recent launches, Pyongyang had warned the talks could be derailed by Washington and Seoul’s refusal to scrap the annual manoeuvres between South Korean and American soldiers.

One of Thursday’s missiles flew around 430 miles out into the Sea of Japan before splashing down into the ocean.

Other observers pointed out that the missile appears near-identical to the KN-23 which North Korea tested in May, though has a considerably improved range.

The new missile’s range puts the whole of South Korea and part of southern Japan within striking distance, while it’s low-altitude flight would make it very difficult to intercept.

Both Trump and U.S. Secretary of State Mike Pompeo played down last week’s launches and Pompeo has continued to express hope for a diplomatic way forward with North Korea. 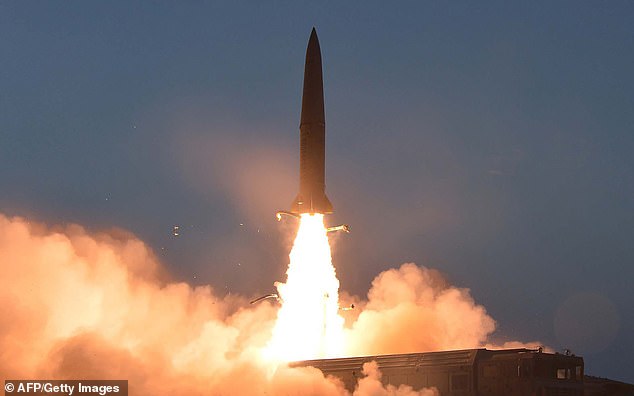 South Korea’s Joint Chiefs of Staff said the launches were done Wednesday from the North’s north eastern area. Pictured: one of the missles launched last week

Since the June 30 meeting in the Demilitarized Zone (DMZ) between the two Koreas, Pyongyang has accused Washington of breaking a promise by planning to hold joint military exercises with South Korea in August and warned that these could derail any dialogue.

North Korea has also warned of a possible end to its freeze on nuclear and long-range missile tests in place since 2017, which Trump has repeatedly upheld as evidence of the success of his engagement with Kim.

A February summit in Vietnam between Trump and Kim collapsed after the two sides failed to reconcile differences between Washington’s demands for Pyongyang’s complete denuclearization and North Korean demands for sanctions relief.

Trump reiterated to reporters at the White House on Tuesday that he had a good relationship with Kim, but added: ‘We’ll see what happens. I can’t tell you what’s going to happen.’

Pompeo said on Monday he hoped working-level talks to revive denuclearization talks could occur ‘very soon’, but emphasized that a follow-up leaders’ summit was not planned.

Pompeo and North Korean Foreign Minister Ri Yong Ho had been expected to meet on the sidelines of a Southeast Asia security forum in Bangkok this week, but Ri canceled his trip to the conference, a diplomatic source said.

On Tuesday, the senior U.S. official also said it appeared Ri would not be in Bangkok.