It was a historic moment watched live on television by millions around the world. But North Korean dictator Kim Jong Un’s walk across the border into South Korea on Friday was revealed to his own oppressed people only yesterday.

The totalitarian state’s main broadcaster finally broke the news in the afternoon, more than 12 hours after Kim returned home to recover from a drink-fuelled state banquet in South Korea following his peace summit with President Moon Jai In.

The adulatory news bulletin praised Kim’s mastery in initiating the denuclearisation talks and hailed them as a milestone towards unification.

Details of the talks emerged yesterday as observers reported that notorious bon viveur Kim, who dispensed with his trademark horn-rimmed glassed, was bleary-eyed as he gulped champagne at the lavish banquet and his officials invited ‘McDonald’s-style’ US investment. 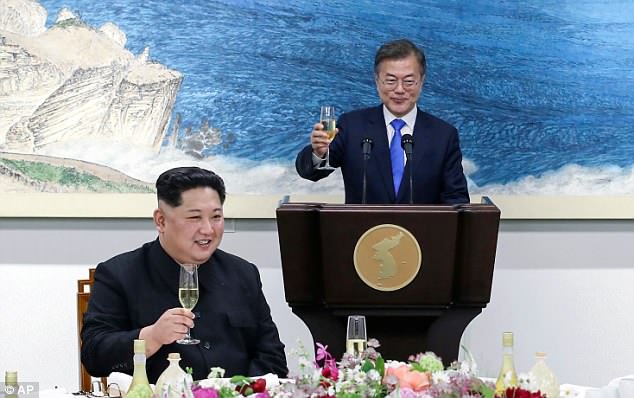 In an unguarded moment, Kim reportedly said he was ‘embarrassed’ by North Korea’s ‘poor infrastructure’ when President Moon told him he wanted to visit his communist neighbour and climb Mount Paektu.

Kim was unexpectedly joined at the banquet by his wife – former cheerleader Ri Sol Ju. She crossed the border hours after her husband, despite not being on the official guest list. Her appearance came days after Ri, who is said to have three children with Kim, was declared first lady – a title never before granted by the misogynistic North Korean dynasty.

It is believed to have been Ri’s first visit to South Korea since she was a 16-year-old member of the North Korean cheerleading team that attended the 2005 Asian Athletics Championships.

Kim’s sister Kim Yo Jong, who is seen as the dictator’s unofficial chief-of-staff, was constantly at his side, taking copious notes and blushing as her brother joked to President Moon that she was a ‘star’. 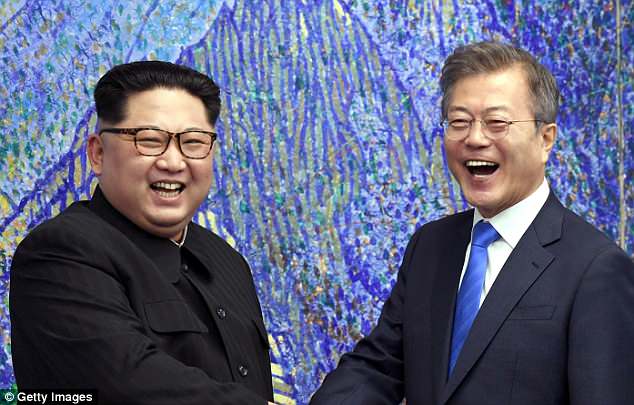 A senior South Korean official said Kim’s officials indicated at the banquet that their leader wanted his country to become ‘normal’. Chung In Moon, a special adviser to President Moon, said McDonald’s could soon appear on the streets of the capital Pyongyang. ‘They want American investment,’ he told US broadcaster CNN.

The South Korean summit is expected to be followed by talks between Kim and Donald Trump, possibly in Singapore or Mongolia next month or in June.

President Trump, who claimed credit for Friday’s summit, said: ‘We’ll be setting up a meeting very shortly. We have it broken down to probably two sites. And hopefully we’re going to have great success.’