North Korea has hit out at the US government, warning officials including the Secretary of State that using ‘vicious slander’ would not help in improving relations.

The angry rhetoric came as President Donald Trump arrived in Japan for a G20 summit and also attempted to broker another summit with North Korean despot Kim Jong Un.

A statement from the country’s foreign ministry said the US ‘viciously slandered’ the rogue state, citing reports by Mike Pompeo’s state department about human trafficking and religious supression that rank North Korea poorly.

‘It would be difficult to look forward to the improvement of bilateral relations and denuclearisation of the Korean peninsula as long as American politics are dominated by the policy-makers who have an inveterate antagonism towards the DPRK,’ a statement read.

The statement also cited Secretary Pompeo’s comments on Sunday where he confirmed 80 per cent of North Korea’s economy will remain under US sanctions, one of the sticking points that prematurely ended Trump and Kim’s Vietnam summit in February.

‘If anyone dares to trample over our sovereignty and the right to existence, we will never hesitate to pull a muscle-flexing trigger in order to defend ourselves,’ the statement continued. 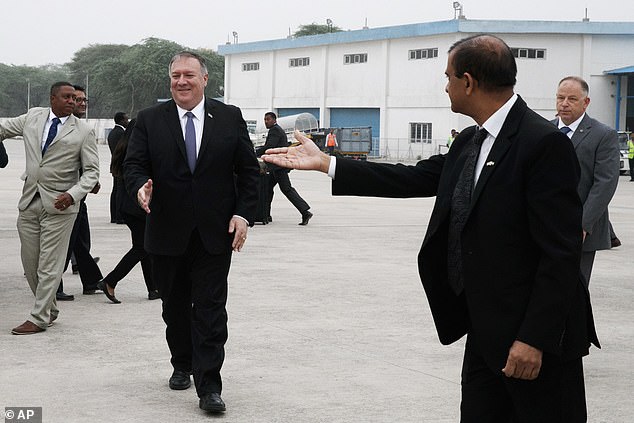 The criticism from North Korea was mostly targeted at Secretary of State Mike Pompeo, how in the last week has released reports about human trafficking and religious supression that rank North Korea poorly, and reiterated maintaining US sanctions against the state at 80 per cent of the country’s economy 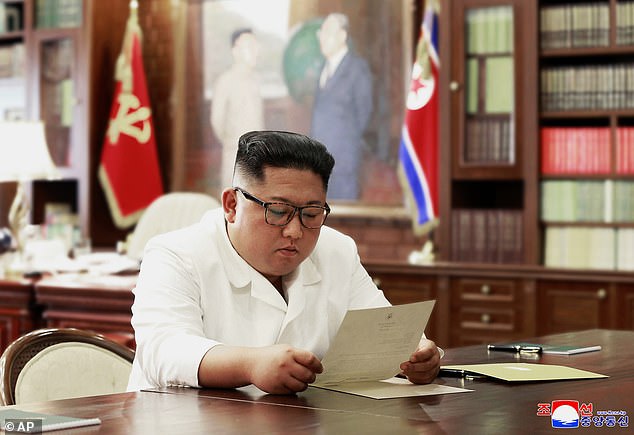 Neither side disclosed any additional details about the letter’s contents.

Following the three-day G20 summit, Trump has announced he will go on to South Korea, where he will hold discussions with President Moon Jae-in about setting up a third summit with leader Kim.

Thursday’s statement blasted Pompeo for ‘sophistry’ and said that his comments are ‘full of falsehoods and fabrications.’

North Korean officials have previously said they will no longer negotiate with Pompeo, accusing him of ‘talking nonsense’ and being ‘reckless.’

Pompeo responded that the North Koreans don’t get to decide the composition of the US delegation. 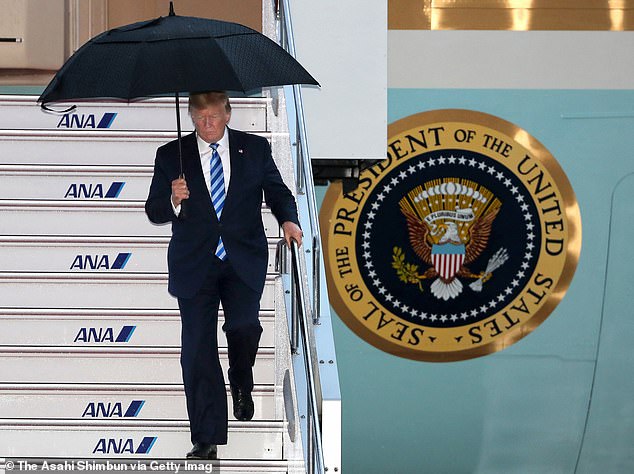 U.S. President Donald Trump is seen on arrival at Osaka International Airport ahead of the G20 summit

Relations between the two countries continue to waver as the Trump administration tries to get denuclearisation talks back on track after the second bilateral summit ended without agreement on future steps.

Both sides now insist that the other must act first, the US over their crippling sanctions, North Korea over completing denuclearisation.

Whatever goodwill the Trump administration was able to develop with the Kim regime is deteriorating rapidly.

In May, North Korea test-fired short-range missiles, which Trump dismissed shortly afterward as not ‘anything major’.

His assessment differed from those of some of his top officials, including then-acting Defense Secretary Patrick Shanahan who believed the tests violated U.N. resolutions. 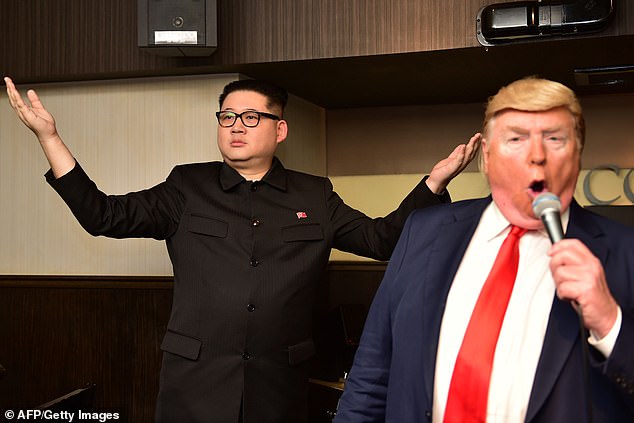 A North Korean leader Kim Jong Un impersonator (left) and a Donald Trump impersonator perform at a bar in Osaka, Japan as the summit kicks off

North Korean officials said Wednesday that South Korea must cease serving as a mediator between Pyongyang and Washington. South Korean President Moon Jae-in, a liberal, has served as a conduit between the two powers as he seeks to achieve one of the principal elements of his administration.

The recent U.S. extension of sanctions against North Korea was an act of hostility and an outright challenge to an historic summit between the two countries in Singapore last year, a spokesman for Pyongyang’s foreign ministry said on Wednesday.

The unidentified North Korean foreign ministry spokesman denounced U.S. Secretary of State Mike Pompeo’s remarks on Sunday that more than 80 percent of the North Korean economy has been affected by sanctions.

The spokesman also accused Washington of ‘viciously slandering’ Pyongyang in its latest reports on human trafficking and religious freedom around the world.

‘This is … a manifestation of the most extreme hostile acts by the United States,’ the spokesman said in a statement carried by the North’s official KCNA news agency.

‘All these speak clearly to the fact that the wild dream of the United States to bring us to our knees by means of sanctions and pressure has not changed at all but grows even more undisguised,’ he added.

But a second summit in Vietnam in February collapsed as both sides failed to bridge differences between U.S. calls for denuclearisation and North Korean demands for sanctions relief.

Since then, North Korea has complained of U.S. sanctions and demanded Pompeo be replaced by someone ‘more mature’, while lauding the rapport Kim built with Trump.

Pompeo, speaking to reporters on Sunday, raised hopes for a revival of nuclear talks after a recent exchange of letters between Trump and Kim.

The North Korean spokesman warned it would be difficult to achieve denuclearisation as long as U.S. politics are dominated by policymakers who have an ‘inveterate antagonism’ towards North Korea.

‘We would not thirst for a lifting of sanctions,’ the spokesman said.

‘Our state is not a country that will surrender to the U.S. sanctions, nor are we a country which the U.S. could attack whenever it desires to do so,’ he added.