Revealed: North Korean ghost ships that wash up in Japan are aging fishing vessels pushed out of their own waters by Chinese ‘dark’ fishing fleet

North Korean ghost ships that wash up in Japan are ageing fishing vessels pushed out of their own waters by a ‘dark’ fishing fleet, an NGO has revealed.

Global Fishing Watch used satellite technologies to analyse marine traffic in northeast Asia in 2017 and 2018 and found that hundreds of Chinese fishing vessels were sailing in waters off North Korea.

The Chinese ships appeared to be fishing there illegally, which pushed North Korea’s own fleet, which is poorly equipped to sail in such stormy waters, further away from the North Korean coast and into Russian and Japanese waters. 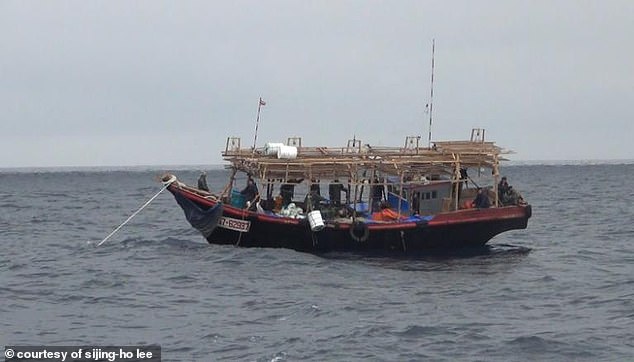 A North Korean squid boat in operation in the Russian waters is seen sometime between August and October 2018. The ageing fishing vessels are pushed into dangerous waters by Chinese fleets

In 2017 more than 100 boats landed on the Japanese coast with 35 bodies on board and more have been found on beaches since.

At the time the Japanese Coast guard said the washed up ships could have ended up there due to bad weather and the notoriously unsettled sea in the area.

Fishing in North Korean waters violates international law but that didn’t appear to deter the 900 Chinese ships in 2017 and 700 in 2018, according to Global Fishing Watch’s report. 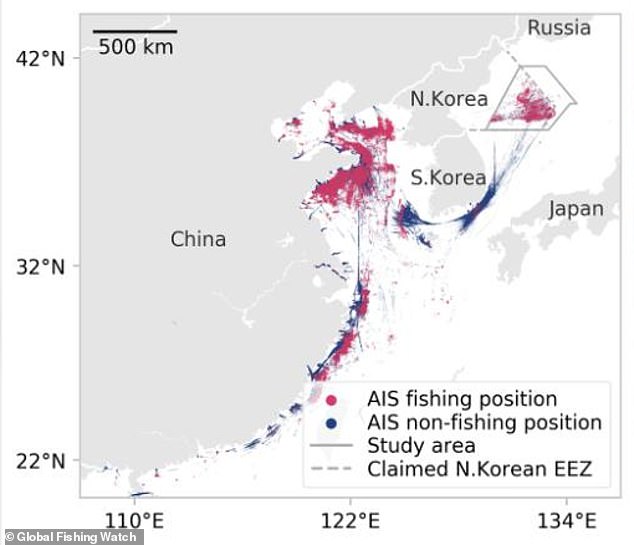 This amount would have been more than South Korea and Japan’s haul combined during the same period.

‘It is the largest known case of illegal fishing perpetrated by vessels originating from one country operating in another nation’s waters. 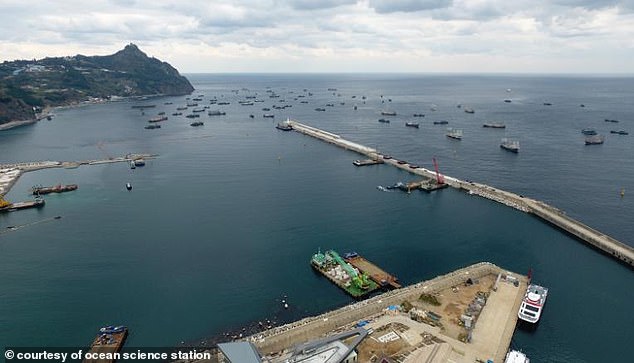 ‘It is too dangerous for them (North Korean boats) to work in the same waters as the Chinese trawlers. That’s why they’re pushed to work in Russian and Japanese waters and that explains why some of North Korea’s damaged vessels showed up on the beaches of Japan.’

The experts who worked on the study – which was published on Wednesday – were able to track the vessels using technology that is only now available.